My friend Martin and I, with our respective sons, Ben and Joe, are on Skomer, an island off the Pembrokeshire coast in south-west Wales. Ostensibly, we are here to go bird watching, but there does seem to be a lot of cricket going on. This is day 3. Day 2 and day 1 can be found at the respective links, or just below if you are reading April. As you can see, the weather was perfect again. 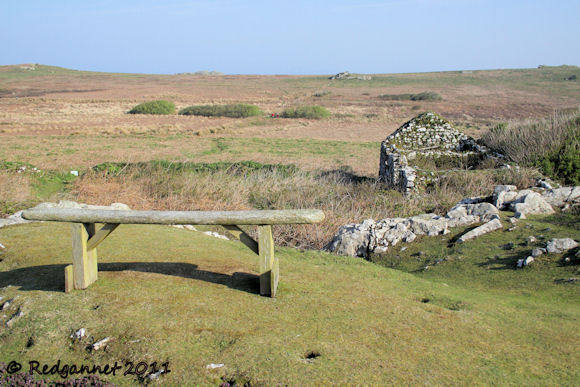 The boys had been very good the evening before, but a late night had left my son reluctant to leave his bed. Martin took Ben to Maury Mere hide while I waited close to the farmhouse.
A bench overlooks the North Valley which is noted for its Short-eared Owl. From the bench I was able to scan the brambles and small bushes. In the distance you may see Chris Perrins (Leverhulme Emeritus Fellow at the Edward Grey Institute of Field Ornithology at Oxford University), a man confident enough to wear red while birding. The ubiquitous Willow Warbler was easily seen and I managed to add Reed Bunting, Sedge Warbler and Dunnock to my Skomer list. 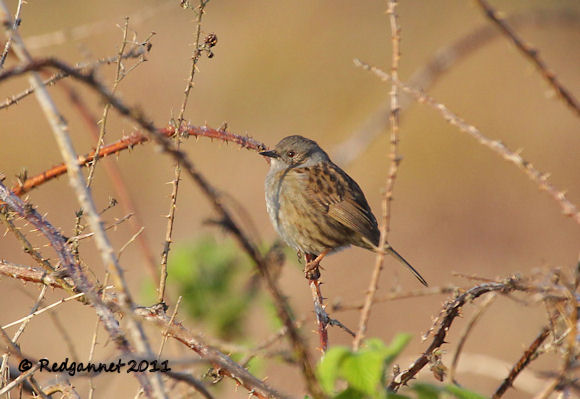 The apex of the back wall of the tumbledown building proved very productive with Willow Warblers picking through the moss and small plants that had taken hold on the rocky wall. Blackcaps liked it here too seeking food until a Lesser Black-backed Gull decided that it would make a good vantage point. During the past couple of days, we had also seen Common Blackbird, Collared Dove, Northern Wren and Meadow Pipit on the wall. 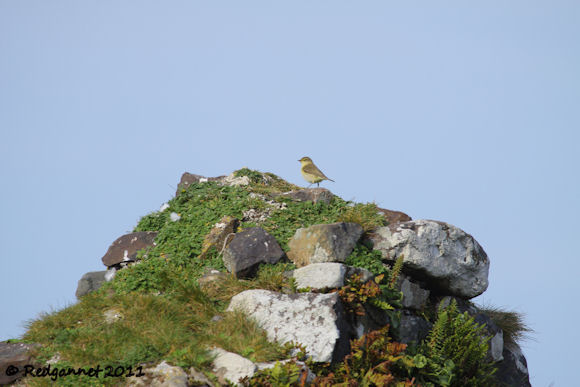 A couple who had been staying for the last couple of nights came to have one last look before they had to go home. Just as they turned to leave, I noticed the buoyant flight of the Short-eared Owl coming towards us across the valley. It gave us a perfect flypast and disappeared over the headland to our left as John and Helen headed home. Such a sighting called for a big breakfast and a game of cricket while we waited for Martin and Ben to return and the gloating to commence. 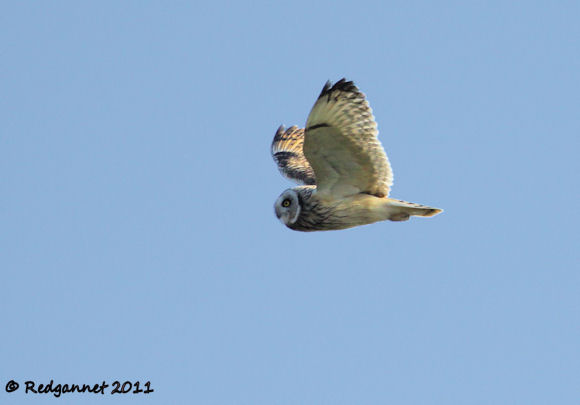 We headed west today towards Skomer Head and on to Bull Hole where we found a huge mixed colony of Common Guillemots and Razorbills.  We spent some time looking out for Common Porpoises. Some had been seen just as we arrived, but we missed them. The island was much busier today with the maximum of 250 permitted visitors expected. In contrast to the16 of us yesterday when there were no boat landings, Skomer was buzzing. As usual Northern Wheatear and Meadow Pipits were common and obvious, standing proud on the hummocks and rocks that littered the island. 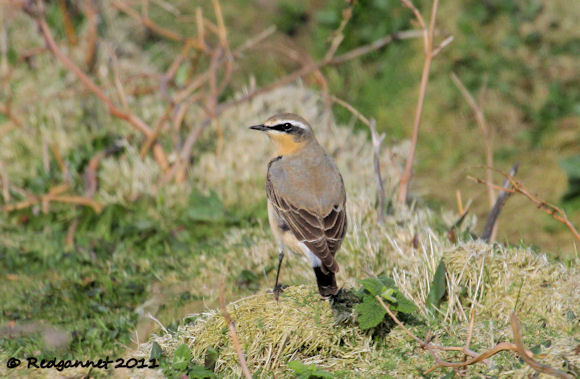 Garland Stone was our target picnic spot for the afternoon and we spent a while, high on the cliff, watching the Grey Seals and Northern Fulmars. A Peregrine Falcon flew by below us, shortly followed by another, slightly higher. I wonder if the first intended to flush birds off the cliff for the second one to ambush moments later. 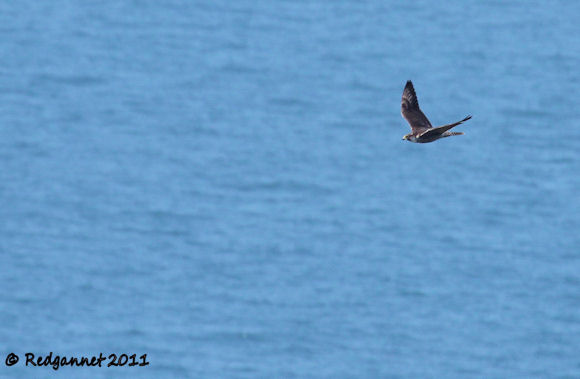 Herring Gulls, Great and Lesser Black-backed Gulls, Gannets, Cormorants, Shag and a Raven passed as we watched. Martin took the boys back to the Old Farm after a picnic lunch and I stayed on for a short while, eventually getting an acceptable picture of a Northern Fulmar. 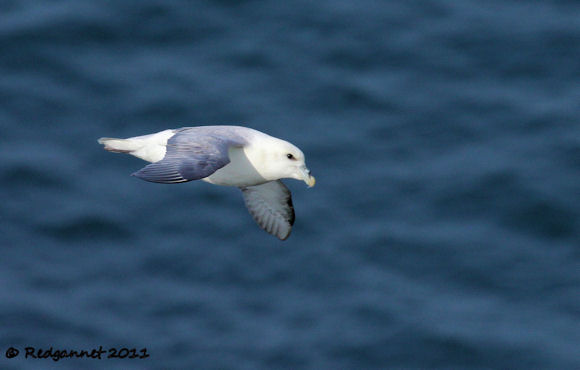 On the way back two Peregrines, possibly the same ones that we had seen earlier, rose from the rock behind me. One just opened its wings and stepped off the bluff, rising vertically on outstretched wings using the wind and looking for all the world like a child’s kite. 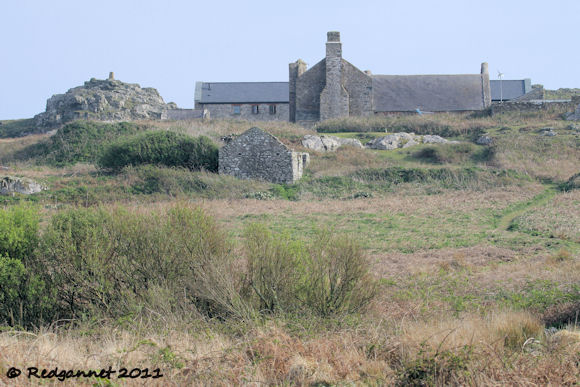 The track took me back towards the farmhouse which could be seen across North Valley where I had to run the gauntlet of Willow Warblers. If they ever get organized, mankind is in trouble. 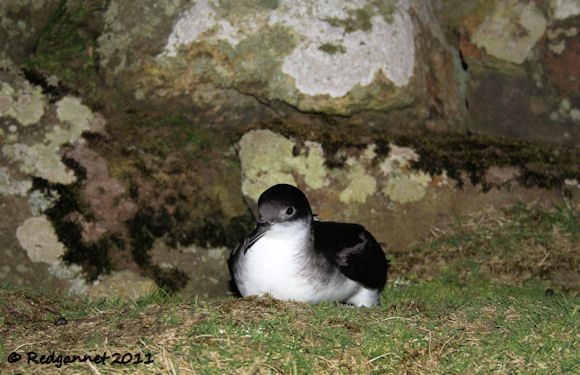 The rest of the evening was spent around the farmhouse either playing cricket or looking out for the owl from the bench. Once it was dark, I borrowed Martin’s night vision system and went out to check on the Manx Shearwaters. The wall along the road leading to and from the farmhouse was productive with many birds against the rocks or perched on top. I was not sure if the wall was a hazard that the stumbling birds get trapped against. 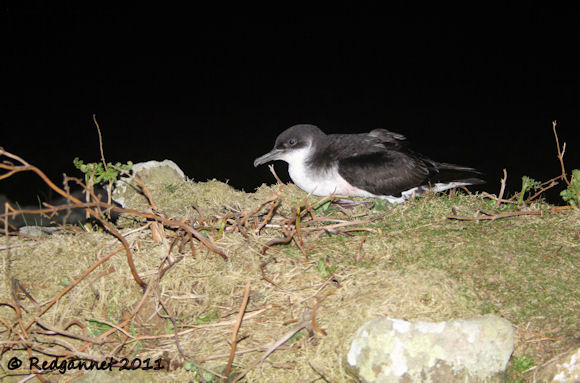 The Wildlife Trust of South and West Wales have built a terrific website with tons of information, maps and logistics for anyone wishing to visit Skomer. I would draw your attention to one detail which deserves highlighting. The boat does not ferry visitors to and from the island on Mondays. If you turn up on a Monday, you will have to be satisfied with a circumnavigation of Skomer and its neighbouring islands. This also means that visitors staying overnight on Sunday will have to stay the extra night until Tuesday (Incidentally, the ‘first come first serve’ policy on the ferry left a few disgruntled passengers having to wait for the next sailing, though overnight guests take precedence over day-trippers).
The boat only runs during the season between April 1st and October 31st.

Day 1, Day 2 and Day 4 can be found at these respective links.