A thick blanket of cloud depresses temperatures along the coast until the sun burns it off later in the morning. 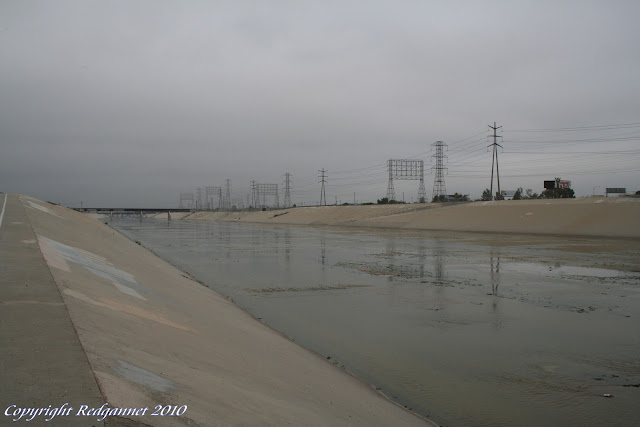 The LA River drain looked very gloomy under the clouds. The birds were very sparse too.
A few Black-necked Stilts clucked at my intrusion and a single American Avocet looked very lonely. 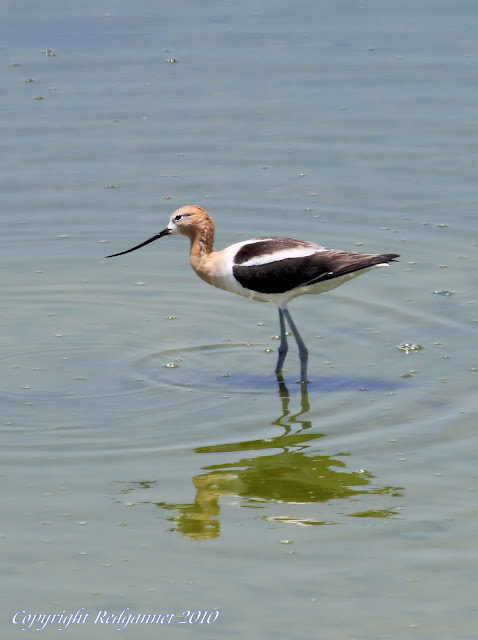 This picture was taken later in the day when the light was better and the birds looked happier. On my last visit, a naked woman skipped across the drain for my entertainment ( http://redgannet.blogspot.com/2009/08/come-on-in-waters-great.html ), but there was no such show today to lift my spirits. 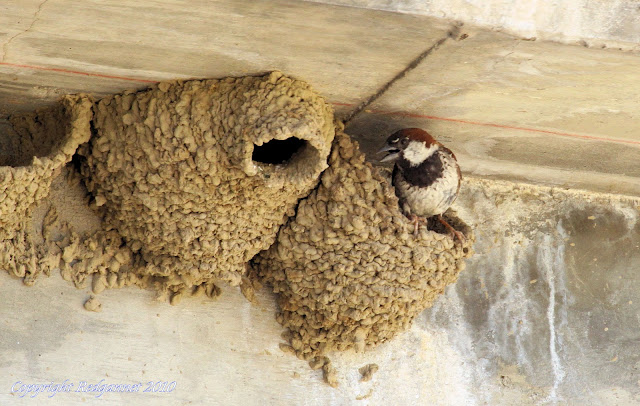 The hirundines had arrived since my last visit. Cliff Swallows were most abundant, and their nests were already empty with new prospective tenants sizing up their suitability.
Barn Swallows were less numerous with Nothern Roughwing Swallows only numbering a couple of dozen.
A Pacific Forktail was up early. The time was barely 07.30 and cool, so it was quite sluggish and let me approach quite close. The blue dots on it’s back are the distinctive trait of this species. I was looking forward to some dragonfly spotting later on in Dominguez Gap. 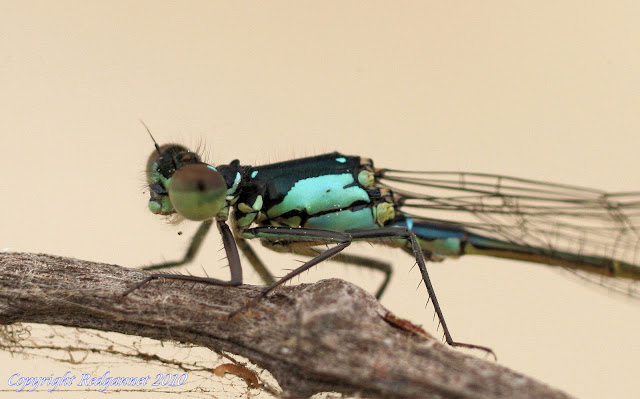 A cycle trail runs along the left edge of the drain as you face downstream. On the other side of the path is a strip of freshwater wetland. This is a restoration project which caught my attention on my previous visit. There were so many dragonflies that I almost forgot that I was supposed to be writing a bird blog. 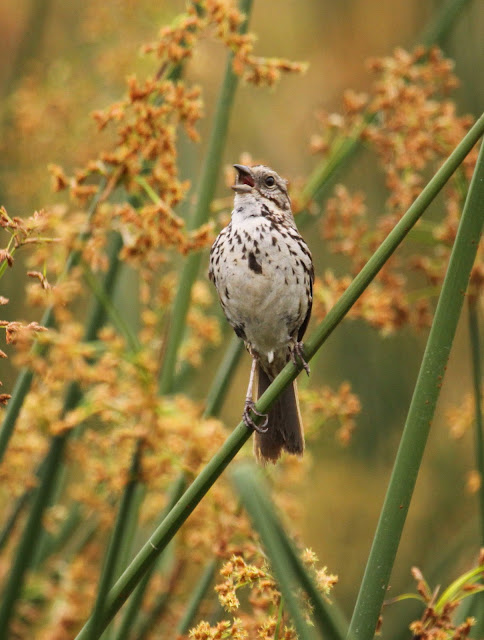 In the Tule beds, Song Sparrows were calling and an African Weaver had found a home from home. I did not see any males, but I am led to believe that they are probably Northern Bishops. 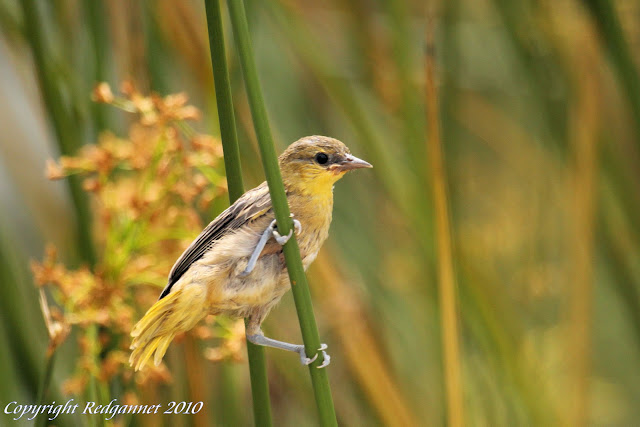 A second weaver-like bird had me vascillating between alien and Icterid. I cannot decide what this one is. 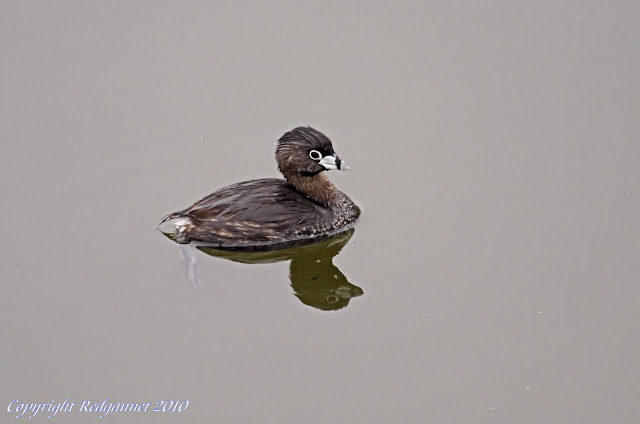 A Pied-billed Grebe had hidden her young in the edge of the rush bed while she hunted for food for them, but like youngsters the world over, they would not stay put and preferred to come out into the open to see what was going on. 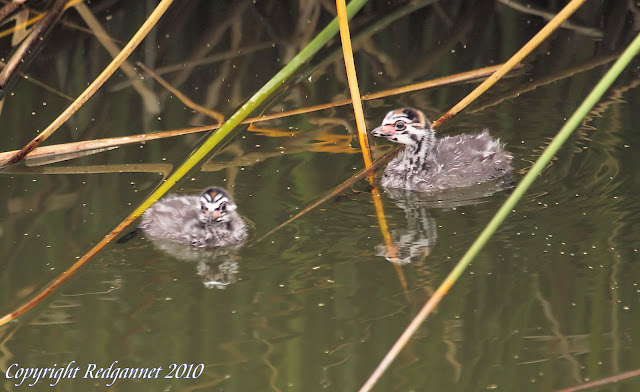 A couple of guys on bicycles stopped to say hello on their way downstream. On their return they mentioned that there were plenty more birds further along. Sure enough, the further downstream I progressed, the more plentiful the birds were becoming. There was still not the selection that I enjoyed before, but the sun had burned through the June bloom now and I was more inclined to take pictures. 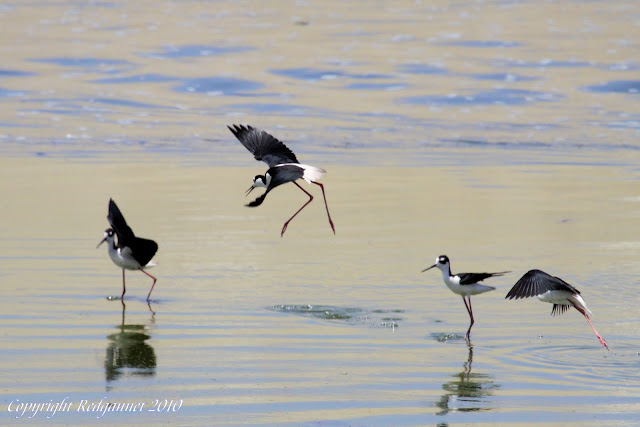 A small group of stilts appeared to be having a game of “it” (or “tag” if you prefer). It was probably behaviour associated with breeding and/or territory, but for all the world, they looked as though they were having fun. 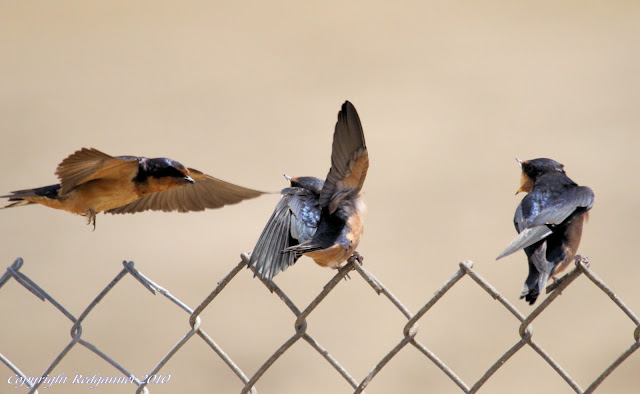 Down the embankment on the left, beyond the end of the wetland strip, the habitat had become very dry. Some recently fledged Barn Swallow chicks were sitting on a chain-link fence being fed by their parents. They went frantic each time a parent bird approached and vied to be the one to receive the beak-full of food thrust down their throat. I noticed that the young birds did not scream at every passing swallow, which made me think that they were able to recognise their own parents at quite a distance. 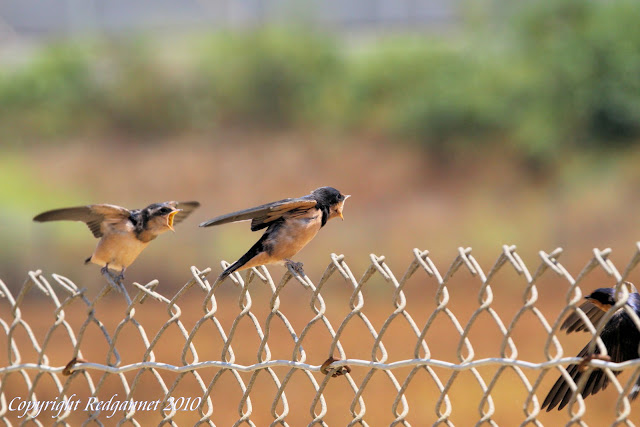 Back on the drain the number of birds was increasing. A few of the stilts had built nests out of wet weed. They will augment this low nest with more weed to raise the level of the nest above any rising water level. 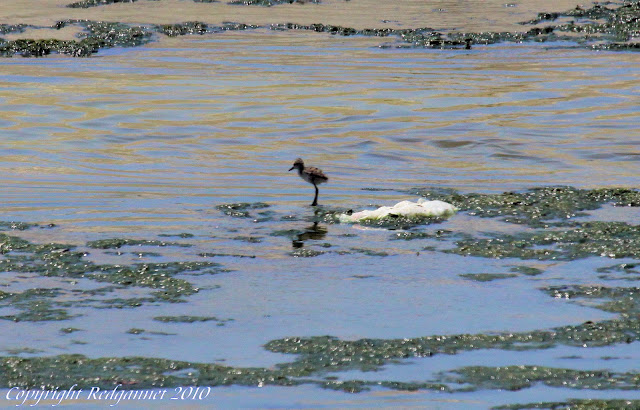 The nesting materials looked green and wet from where I was. Surely this would be cold for the eggs, but it seems to work. This precocious chick was fending for itself while the parents foraged nearby. 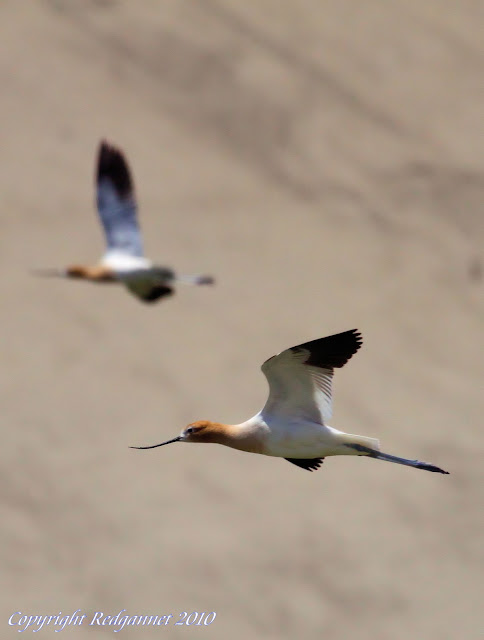 I realised that a few avocets must be breeding as well when they began trying to shoo me off the path. Each time I took a few steps, a pair of avocets rose from a dry patch of ground in the drain and flew at me as if to intimidate me. They flared just in front of me and flew across the face of the Sun as though they could buffet me with their shadows. I moved along to get beyond their threat zone, but not without lingering long enough to fire off a few shots. 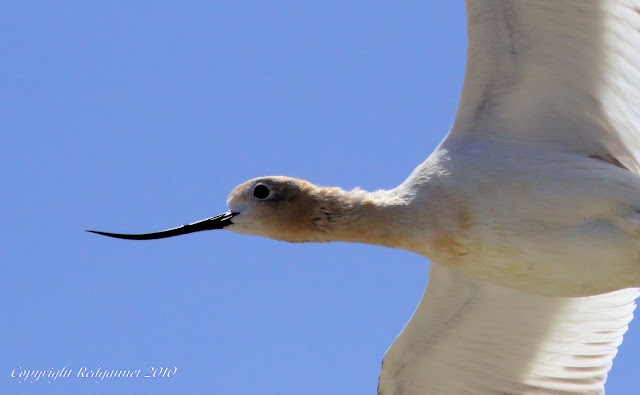 One of the positive aspects of the drain is that the trail along the top of the embankment puts the viewer at a good height for watching flying birds.
Now I had reached Willow Avenue where the concrete gives way to a less constructed waterway. From here it is shaped by the tides of the Pacific though only in respect of waterlevel. It is still encased in stone. Each road bridge over the river has access onto the road and thence to Pacific Coast Highway or Long Beach Avenue from where it is possible to catch a bus back to Long Beach. 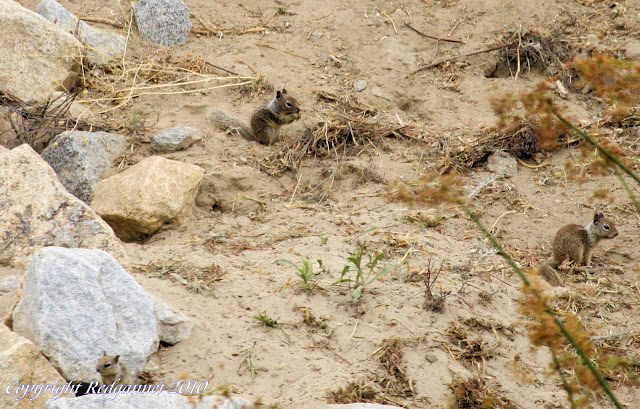 A common sight along the river are the California Ground Squirrels. When you see how cute the youngsters are it makes you wonder why everybody doesn't have one. Then I was reminded that they have a reputation as plague carriers. But still, they are cute aren't they?

The next morning was thick with cloud again, so I elected to leave my camera at the hotel while I searched out and investigated a green splodge on the transit map. I was regretting that decision as I walked into a gem of a nature reserve called the Eldorado (perhaps I should I say nugget) Nature Centre. 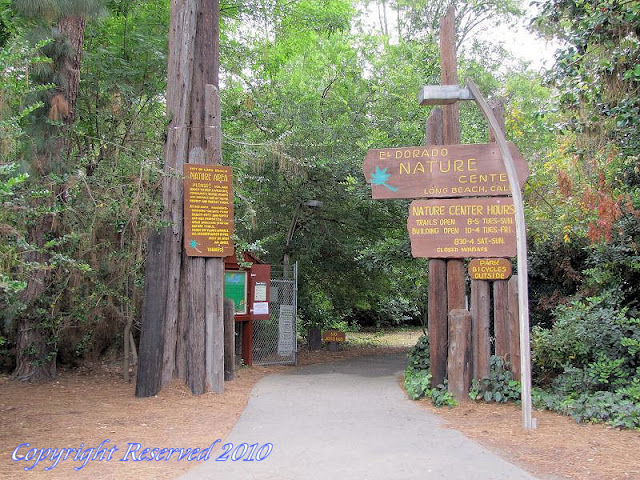 From the outside it looks thickly forested with a fence and “no trespassing” signs. But when you reach the gate it becomes welcoming and very picturesque. It is open from 08.00 ‘til 17.00 every day except Mondays. The gate is locked promptly at closing time whether you are out or not. A well staffed visitor centre was catering for some groups of school children.
It is located in the wider expanse of Eldorado Regional Park and can be found on Spring Street just over the River.

The reserve looks to be popular with local people who walk it’s trails. There are 3 trails in the hundred acre wood, the paved quarter-mile trail, the 1 mile and the 2 mile trails. They weave a way along a stream that connects two delightful lakes. 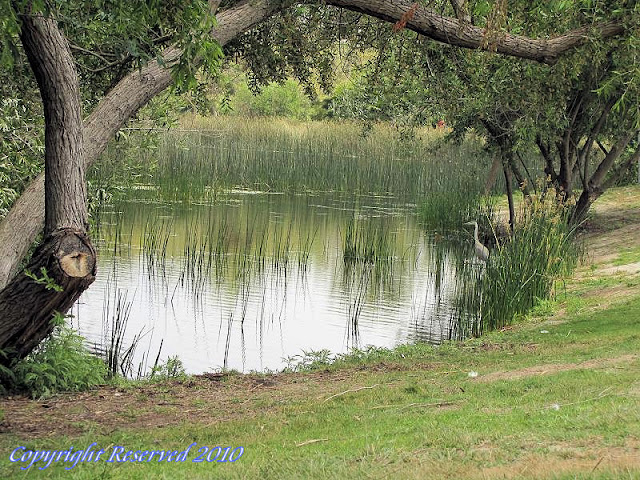 I had already had a good look at a Golden-crowned Warbler and an Allen’s Hummingbird before I met Jerry, a trail steward. I was positively cursing not having brought the camera when he told me of some Great Horned Owl fledglings to look out for further along the path and kindly walked with me to make sure I didn’t miss them. We found three chicks from an original brood of four. The other chick had died when it’s wing became snagged in the fork of a tree. 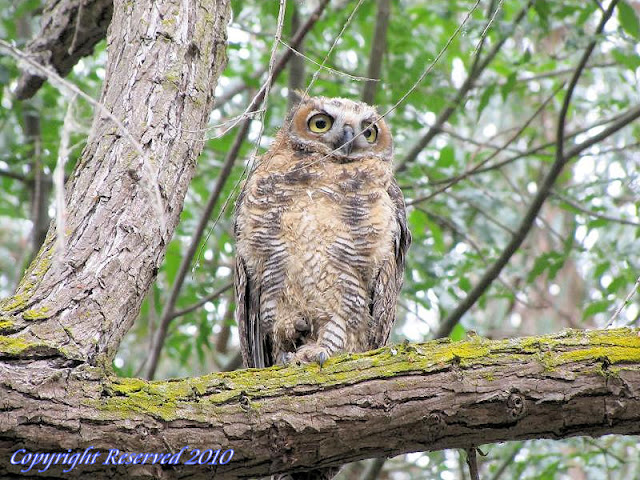 In his capacity as trail steward, Jerry is possessed of intimate details along it’s length. He was able to tell me about the wildlife in the reserve and show me Hummingbird nests. Some had fledged, but a couple still held chicks. 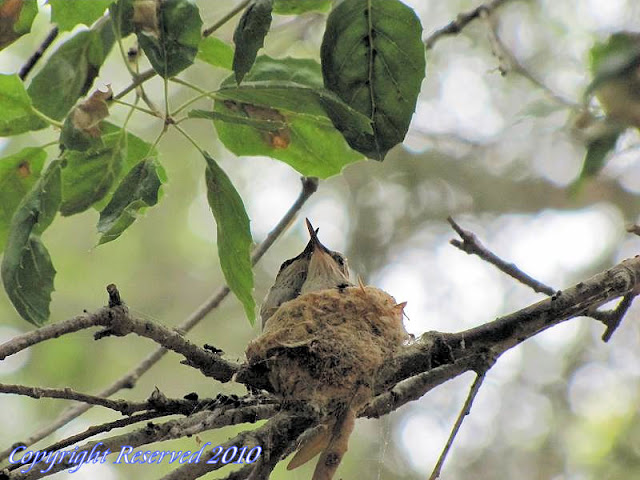 Thank you to Jerry for the pictures to accompany the latter part of this post and for introducing me to the
In 'N Out Double Double burger.
Bird Species; 14 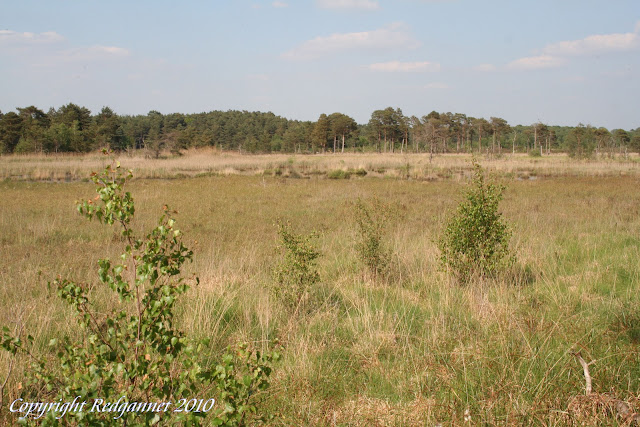 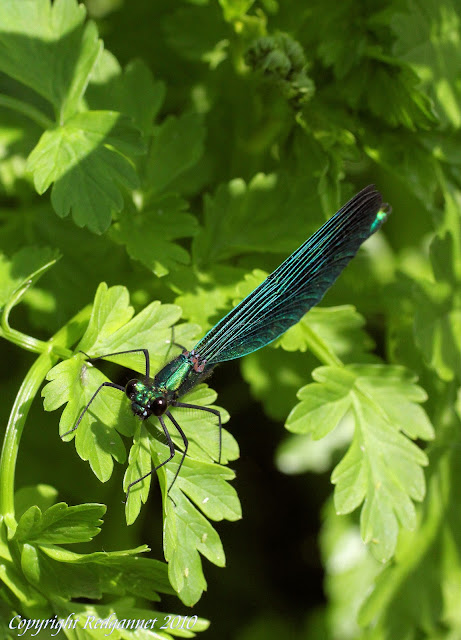 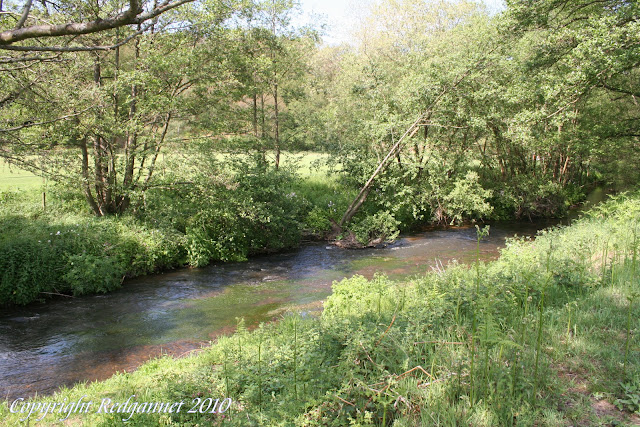 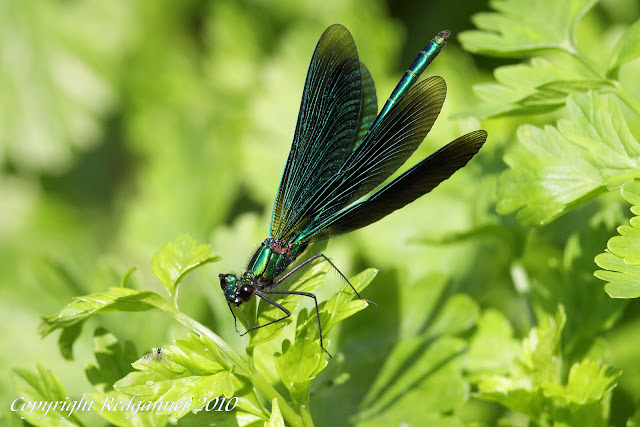 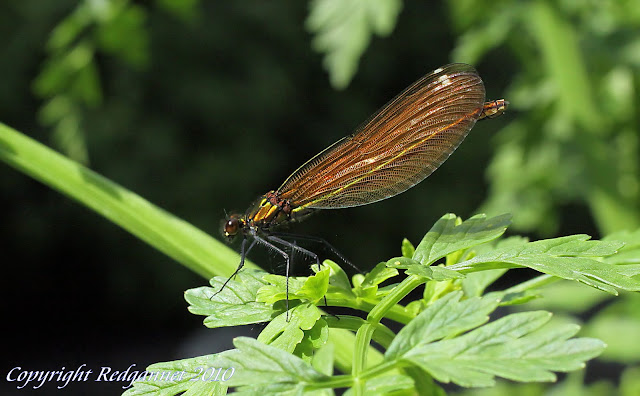 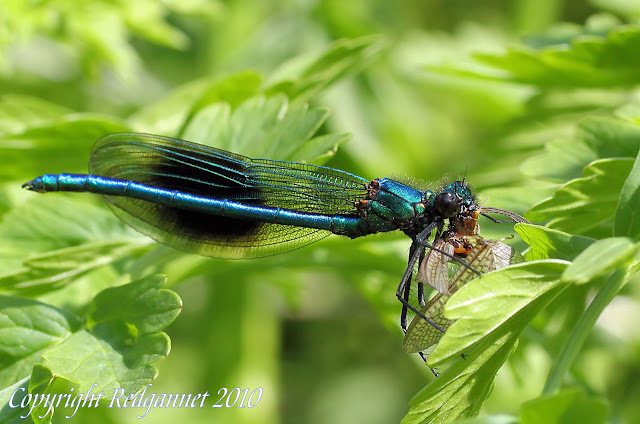 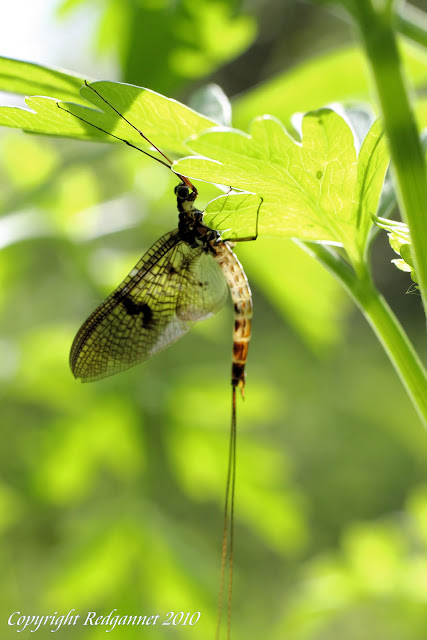 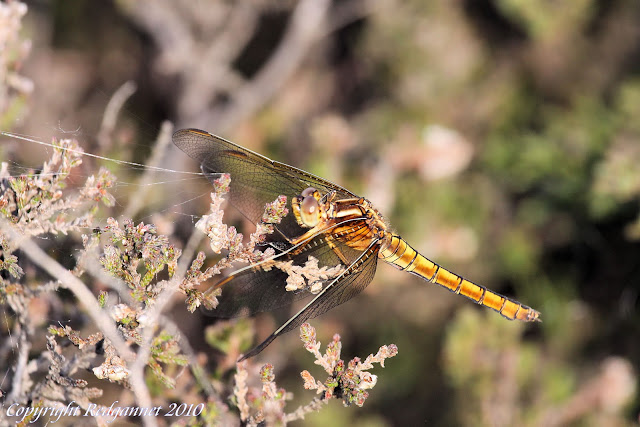 Posted by Redgannet at 01:35 No comments: