Walter and I had spent the morning at Palo Alto Baylands, now we were headed inland to Steven’s Creek to look for Water Ousels. Steven’s Canyon Road bears off to the southwest at the junction with Mount Eden Road (Google Earth ref; 37 16 51N 122 04 22W ) and the stream gurgles over the rocky bed, crossing onto both sides under small road bridges. 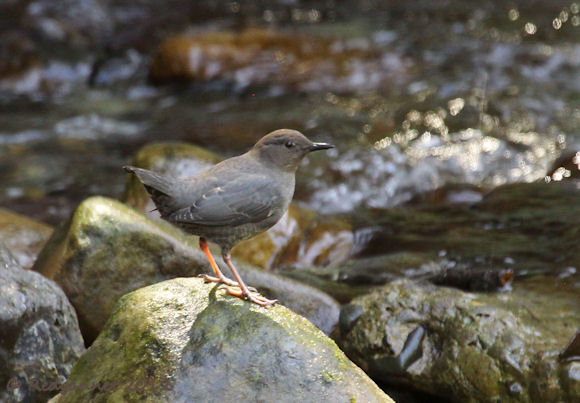 We sat in wait, knowing that the bird preferred the section approximately one mile up from the junction and before long we spotted the American Dipper bobbing on a rock just upstream from us. It took off upstream and we followed, clumsily flushing it again a couple of times. It returned downstream and passed beneath the bridge onto the sunny side of the road. We decided on just one more try. Walter managed one sunlit shot and I got the one above as we returned to the car. It was obviously a sensitive bird and we didn’t want to disturb it any more so we decided to leave it in peace and went back through San Jose and on over Mount Hamilton to Mines Road.
The scenery along the precipitous mountain roads was spectacular. Walter negotiated the unmarked switch-backed road with more attention apparently spent looking for birds than other road users which made me realise how my wife (and surely birders’ spouses everywhere) must feel sometimes. Signs showed that stopping was prohibited along much of the road and the winding roads would have made it difficult and dangerous, so we did not manage any photos along that stretch. Red-tailed Hawks rode the air currents rising up the hillsides with a number of pairs indulging in bonding behaviour. There were Western Bluebirds aplenty and Western Scrub-jays crossed the road ahead of us. 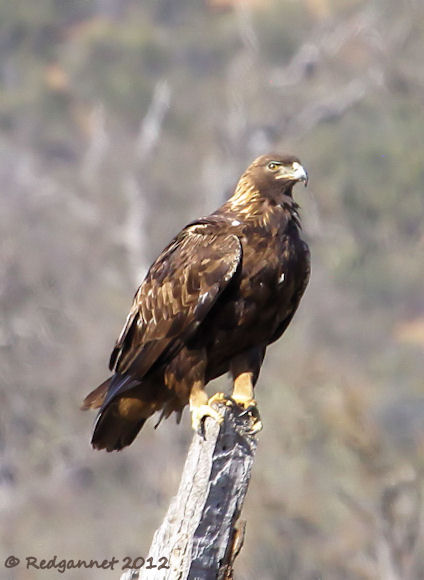 The highlight came when we slowed for a small flock of Yellow-billed Magpies and a Golden Eagle took off from the verge just ahead. It looked huge, with its wingspan seemingly as wide as the road. It settled again very quickly on a stump and we were able to get some pictures at close range before it flew off to a more customary distance of half a mile. 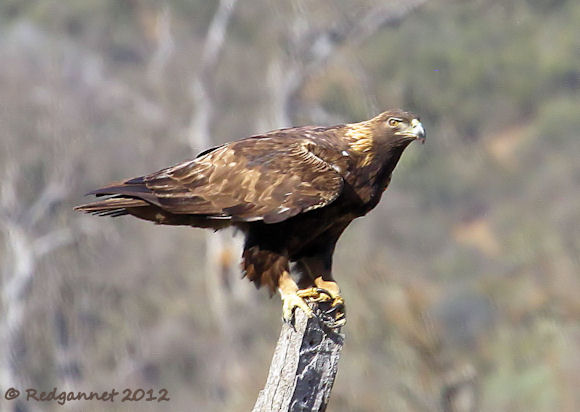 The photos here were taken using the same settings as the shaded dipper and were over-exposed so Corel X11 photo editing had to come to the rescue; quite well I think.
With what seemed to be supernatural prescience Walter announced that we were in a good spot for……. “there’s one”. He had primed me to be on the lookout for what may appear to be a green crow. Lewis’s Woodpecker has a very different flight pattern and behaviour to most woodpeckers and flopped gently across the meadow instead of bounding as others in its family might. It spent more time hawking insects than probing for grubs beneath the bark of the sparsely set trees. 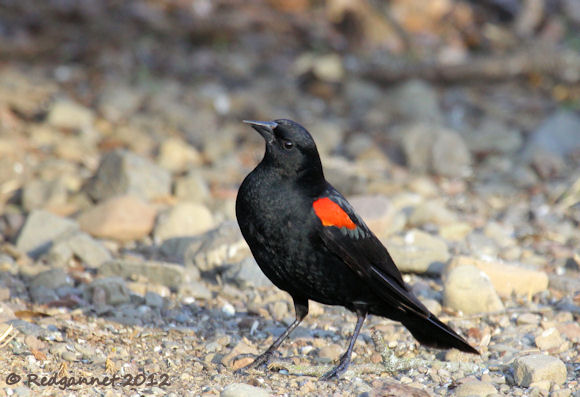 Lunch had been a dreadful chicken burrito and Walter had taken the culinary failures of Steven’s Creek Liquor, Video and Food Market personally, so we stopped in at The Junction (Google Earth ref; 37 23 32N 121 29 23W ), a favourite of the Mine’s Road biker community. A feeder in the yard here made it a great spot for burgers and birds. 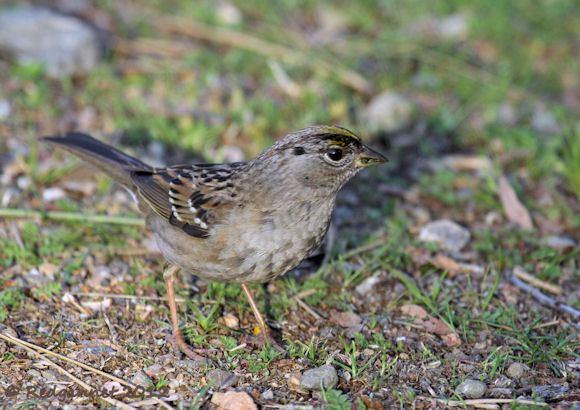 Red-shouldered Blackbirds and Golden-crowned Sparrows fed on the ground looking for seed spilled from the feeder. 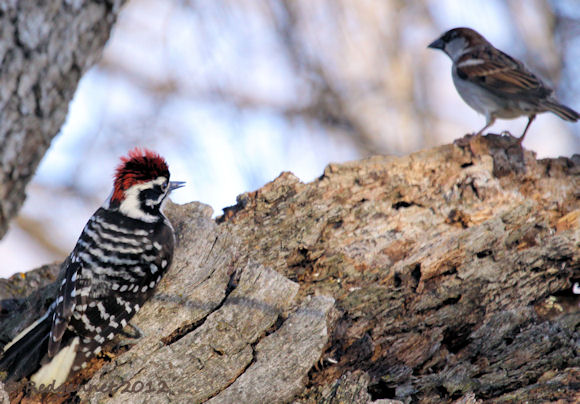 A Nuttall's woodpecker arrived looking very aggressive. Its crown was raised and it chased off a pair of House Sparrows before settling on the feeder. In the photos, I noticed that the red of its crest seemed quite sparse. It couldn’t use its stiff tail feathers for support as it hung from the bottom half of the feeder so it held itself diagonally (I watched it for a while and am embarrassed to confess that I originally presumed it to be a Downy. Thanks Jason). 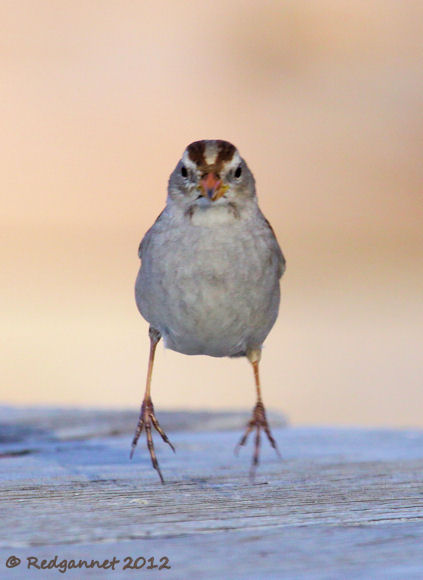 As other diners left, White-crowned Sparrows tippy-toed across the tables looking for scraps. Our day was nearly done now and the light was beginning to fade. Mines Road still had a few birds left for us though. As we passed through the top end approaching Livermore, we stopped to check a Red-tailed Hawks’ nest and came away with a Phainopepla, a couple of Lark Sparrows and a small flock of Wild Turkeys crossing the road.
I am indebted to Walter for his good company and his dodgy driving. It was a great day Walter, thank you and I didn’t really mean it about the driving.
Birds seen; 41

Visit the dedicated USA page for other posts from North America and descriptions of other sites around San Francisco such as; Palo Alto Baylands and Pillar Point at Half Moon Bay
Posted by Redgannet at 19:49