Today’s visit to Tai Po Kau could also be described as ‘A Day in the Life of a Coral Tree’. Ostensibly this was a visit to a wonderful hill forest in the former New Territories, but all the action took place either in the lay by at the entrance, or in the alien Coral Trees.
I arrived shortly after daybreak and found birds as soon as I stepped from the minibus at Google Earth Ref; 22 25 58N 114 11 14E. Blue-winged Minla and Chinese Bulbul were seen in the bushes and an accipiter, probably the Crested Goshawk, circled overhead before I even had my binoculars out. 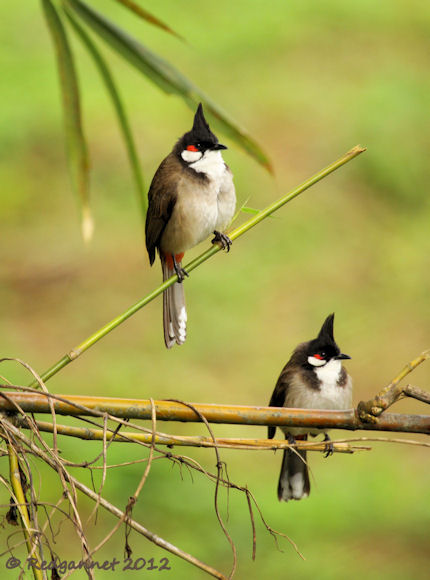 Across the road, the lay by was alive with bird song. Red-crested Bulbuls, Japanese White-eyes and Oriental Magpie Robin were all proclaiming their presence and a short trip up the slope to the right brought Silver-eared Mesia and a Great Tit (P m commixtus). In fact of the 20 birds seen today, 16 were seen before I ventured up the slope to the forest.

The slope to the left of the lay by provides access to the forest on the slopes above. It is not too arduous and shortly brings you to a couple of small holdings that have been completely cleared. At the top of the road is a fitness area and the marked walking routes start from here. I usually follow the easiest Red Route, but this morning, I wanted to take a quick look at the coral trees at the Outdoor Study Centre. 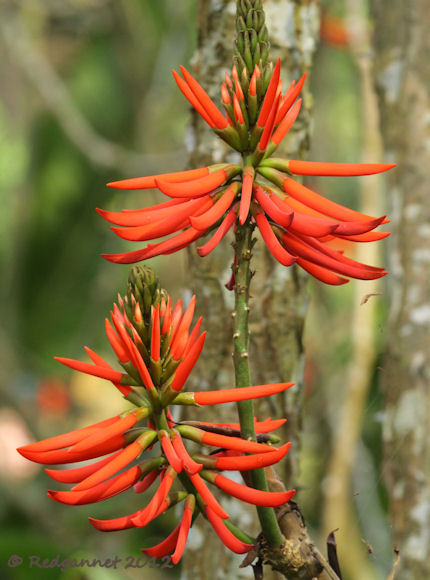 The Coral Tree, Erythrina speciosa, is a native of South America and flowers in March with beautiful red flowers like clusters of tiny, red, elephant tusks. These attract birds from all over the forest to feed from the flowers and Fork-tailed Sunbirds especially love them. 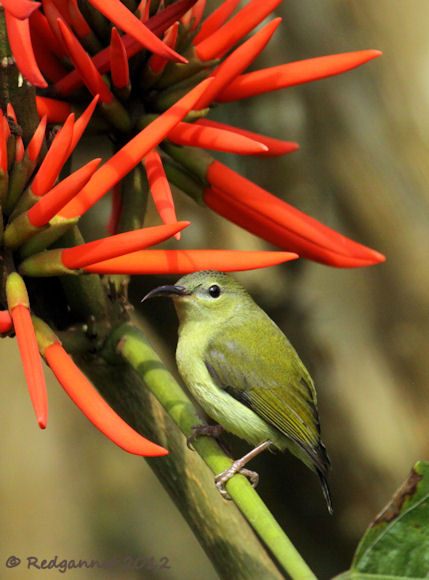 Fork-tailed Sunbird female
One stand of trees in particular is a draw for photographers and this Saturday morning, they were out in force. The coral trees are by the road which climbs a slope here and puts the camera and flowers on the same level. Bathed in the early morning sun, it was irresistible to birds and bird watchers alike. 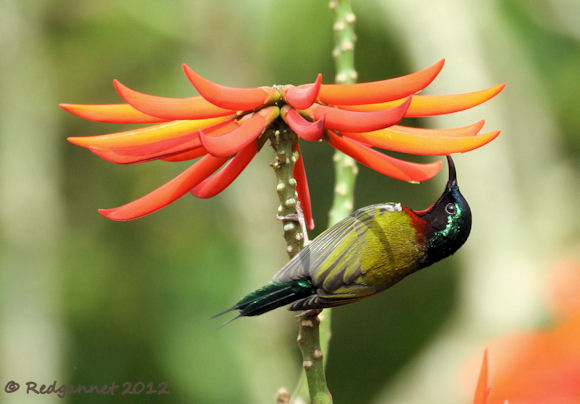 Fork-tailed Sunbird male
The male Fork-tailed Sunbird’s head is iridescent green and causes havoc on my colour receptors. Too much light can be a bad thing. I had to stop down a little to avoid flare. The female however is dull green and didn’t present any exposure problems. 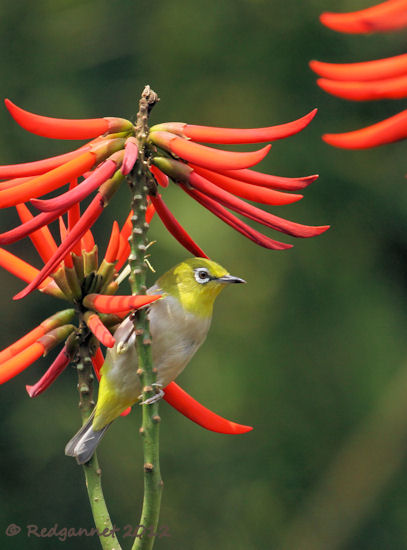 Japanese white-eyes have varied tastes, but appear to relish the sweet nectar from the coral tree flowers. 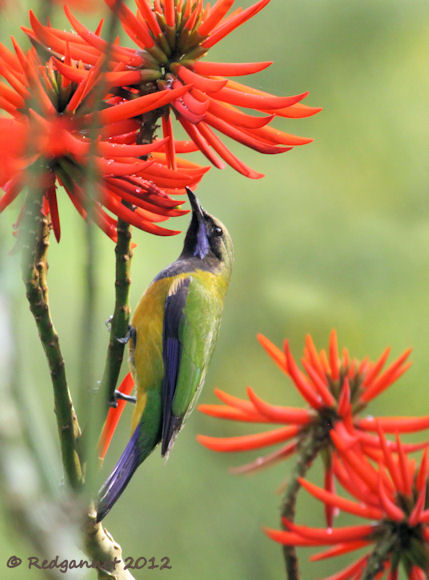 At the top of the slope by the fitness park, I had already seen an Orange-bellied Leaf-bird, but it was silhouetted at the top of a tall cotton tree, another alien species. Although the pair visited the shaded trees, when they came to the Outdoor Study Centre, they allowed me a much better look. The male has the bright orange belly with dark blue primaries and throat with contrasting lighter blue sub-moustachial streaks. The female is much duller. Her belly is still orange, but she lacks the contrast in the wings and throat. 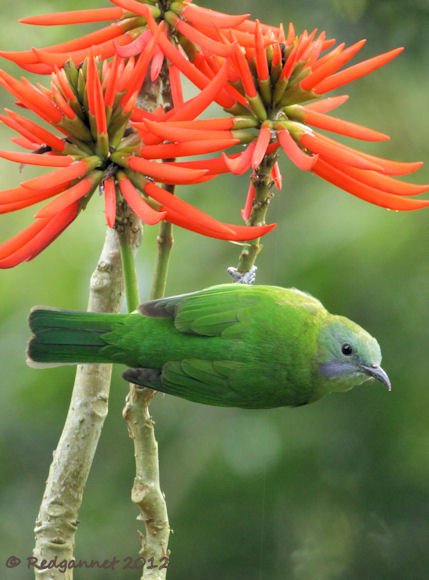 The Crested Goshawk flew over again performing its shivering display and showing the fluffy uppertail coverts clearly, like a little ballet tutu around the base of the tail. At last I struck out into the forest and met a couple of other birders who were trying to coax a Pygmy Wren Babbler from the undergrowth near the picnic site. The wren babbler responded to the playback and I heard the bird, but it did not come out to be seen. It was unfortunate that the coaxers continued to try to tempt it out with playback from a smartphone wrapped in a large leaf. This was too sustained for me and I gave them my reasons for leaving and moved on.
Chestnut and Mountain Bulbuls made plenty of noise in the forest and another bird kept me looking for ages, but I was unable to locate it. It was very close and singing loudly. I tried to imitate it, but it wouldn’t be fooled into showing itself. Grey-cheeked Minivet were fairly common and there may have been a female Scarlet Minivet too, but it was too quick.

Take a cross-tunnel bus (N118 is good from Cannon Road just beyond the World Trade Centre in Causeway Bay) to get across the harbour to Hung Hom Station on the East Rail Line. Take the East Rail Line to Tai Po Market Station. There is a minibus station by the rail station. Take 28K to Tai Po Kau lay by Google Earth Ref 22 25 58N 114 11 10E. If you prefer a taxi, it is only a five minute ride.