I have recently been harbouring a desire to see Adders, Vipera berus, the UK’s only venomous snake. After a couple of days of fruitless searching, I sought help from a pair of more practiced eyes and called in Phil Sharp. We met in the car park at Leybourne Lakes Country Park and headed to the Greensand Ridge, made famous by Phil's snakey friend, the author of Greenie in the wild.

A common misconception that I had carried until now is that snakes like to bask during the middle of the day (this being the most efficient time for gathering heat), thus my searching had taken place in the afternoon on the assumption that the snakes would be tempted out by the warm sunshine. Today however, we arrived at 09.30 and Phil found the first adder just moments later. It is more true to say that they bask earlier in the morning so that they have the energy to be active during the day. Reasonable temperatures overnight meant that the snakes needed just a little topping up in the morning to fuel them. The sun was only just appearing around the shoulder of the slope and we had to keep our distance to avoid casting long shadows across the snake. 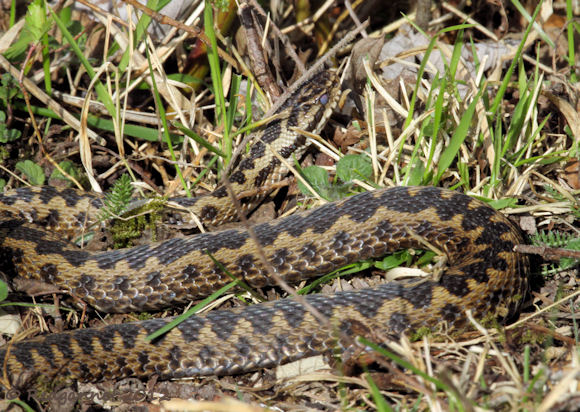 Another assumption was that this was a female. The females have a brown background colour with black markings while the males’ background colour is lighter, usually grey. Some males are darker though and may resemble a female. We were not experienced enough to differentiate on any other criteria, so for the time being, we said female. Note that the eye is opaque which we took to be a sign that a slough was imminent. Phil published his account before me and received a comment from Greenie in the Wild stating that he thought that the snakes pictured were males. Thus began a trawl of the internet in an attempt to find out how to sex an Adder. Apart from the unreliable background colour, I found that the gradual tapering of the tail indicates a male and a sudden tapering is characteristic of a female. Of course if you know different....... 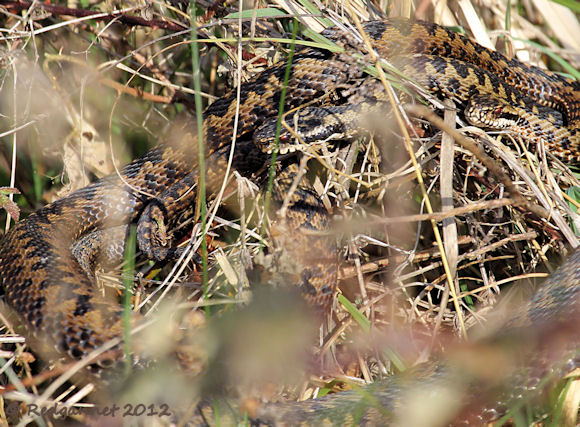 Very shortly afterwards, Phil spotted another two Adders coiled together in the lowest branches of a bramble bush. Without Phil, I would have certainly missed these two. Our fourth snake came as I lifted one of the refugia that dot the slopes. It coiled into what appeared to be a defensive attitude, so I lowered the cover to avoid disturbing it too much. 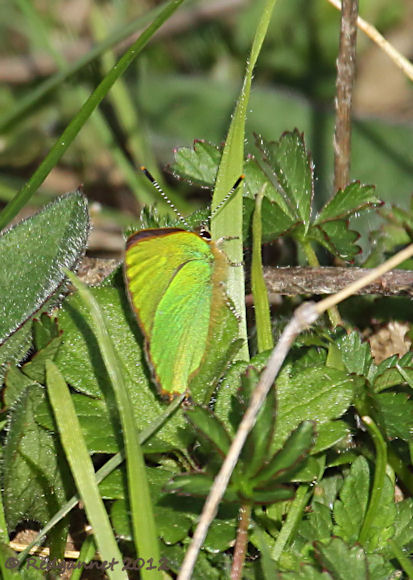 We climbed over the top of the hill and into another field which looked very promising, but the heat was more intense up here and the reptiles may well have gone to seek some shade by now. We did however find a Holly Blue and a Green Hairstreak, both life butterflies for me (another comment posted for Phil's account was that this was a very early Green Hairstreak and may be the earliest recorded in Kent). 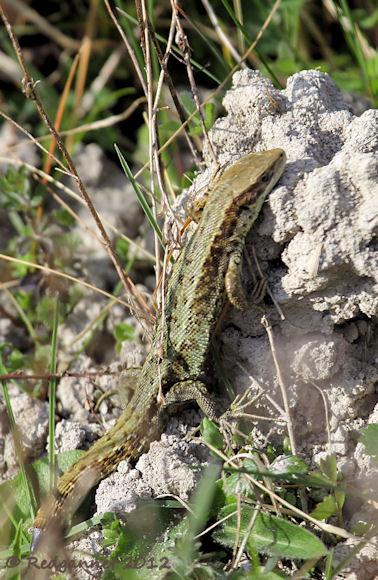 This Common Lizard has lost its tail in the past, as indicated by a dark stump at the end.

Slow Worms and Common Lizards were also seen, but there was no question about which reptile I enjoyed the most. We returned towards the car and revisited a couple of the successful sighting spots. The square of corrugated iron that had provided refuge for the fourth Adder now held a fifth and made Phil jump as he had already seen number four to the side and was not expecting to find another one under there.

Thanks very much to Phil for his company, practiced eye and for driving during the fuel panic.
Posted by Redgannet at 22:56