The approach road to Mushrif Park is lined with flowering shrubs with trees behind which today were filled with White-eared Bulbul and Eurasian Collared Doves. 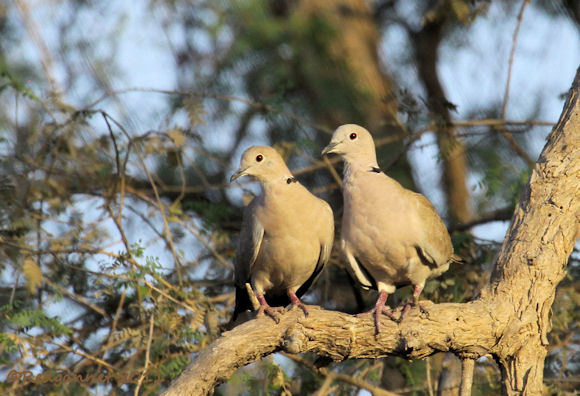 Halfway up the drive is a control gate (25 13 25N 55 27 08E) where you will be charged the entrance fee which currently stands at 6 Dirhams (@ 5 Dirhams = £1). In the unlikely event that you are on foot, the entrance is 3 Dirhams. Just beyond the gate, a leaking drain provides a small oasis that drew in a lot of bulbuls, doves and House Sparrows. Little Green Bee-eaters were easily seen here too. This one appeared to have been eye-deep in soft mud. Would bee-eaters be excavating burrows at this time of year perhaps? 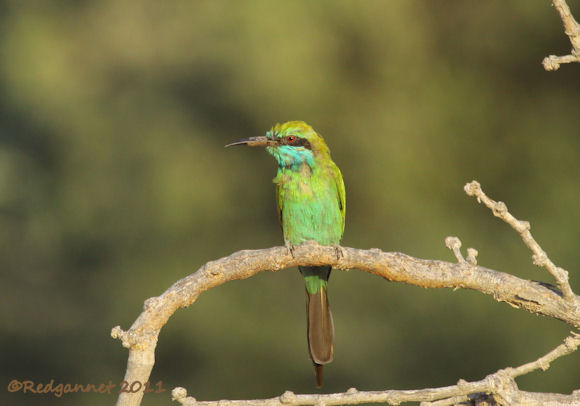 The park is a good example of Ghaf woodland. The Ghaf tree has become endangered and efforts are underway to replant it into the desert. The plantation-style straight lines that can be seen from Google Earth images suggest that this park is aiding the efforts to preserve it.
I had arrived close to dusk and had a very specific target bird in mind, but before it got dark I wanted to explore an interesting looking tract of scrubland beyond the main centre of the park. The spot I sought was beyond the mosque and the restaurant, but I was disappointed to see that it was a picnic area approached through a Smurf inspired arch. There were no picnickers here today so I had a look round, but found little more than I had seen already. 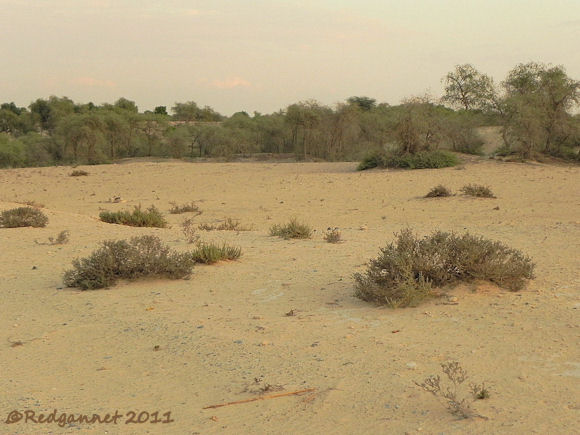 Beyond the next car park and the cycle track the small trees thinned out and the environment began to resemble a scrubby patch of desert. An Isabelline Wheatear perched on a low bush here and I had to wait for it to fly before I could see its distinctive tail pattern. The Burj Khalifa was visible in the distance through the glowing light of a gulf dusk. The Muezzin began his azan, calling all to prayer, at 17.52 as the sun set on this Thursday evening in the second week of October. 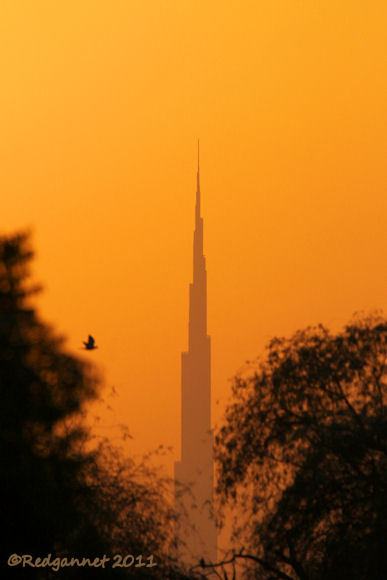 Opposite the mosque is a patch of trees. Pallid Scops Owls are said to be resident here and often give spectacular views as they feed in the spotlights of the administration building there. As I approached, a small, cryptically plumaged bird flew from the top of one of the roadside lights into a tree. Surely it was one of the owls, or would that be too big a presumption to make? It was such a brief sighting that I cannot rule out Little Owl nor Eurasian Scops Owl at the moment and will have to defer the pleasure of getting the red pen out.
Hoping for a better sighting, my eyes were drawn to movements through the trees as I sat on the grass watching the brightly lit areas. Mostly these were bats, but occasionally a dove would clatter out from its roost, wings whirring.
I did hear a soft ‘woo – woo - woo’ call coming from behind the administration building which I took to be the Pallid Scops Owl, but no more sightings were had and families were arriving to set up picnics on the grass to celebrate the start of the Muslims’ weekend.

I had a return flight to London this evening and no firm plans as to how to get back to the hotel, so I left the owls un-ticked and headed home. As my friend Martin often philosophically states, I have a good reason to return to this very pleasant site on another occasion.
To reach Mushrif Park, take the Metro train to Rashidiya Station at the airport end of the Red Line. An all zones pass costs 8.50 Dirhams. Bus 11a runs from here to the park entrance but has an infrequent schedule about once every hour. I took a taxi from the station rank and paid 20 Dirhams.
There is no taxi rank at the park and I was lucky to find one for the return journey. If you are stuck and time is running short, it may be possible to walk about a mile back towards the airport and catch one of three buses that run through the nearby estate as shown in the photo below. 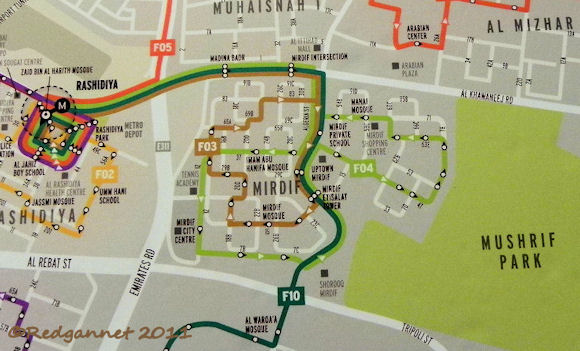 Birds seen; 12
Eurasian Collared Dove 150, Pallid Swift 6, Little Green Bee-eater 8, Indian Roller 3, Eurasian Hoopoe 3, Barn Swallow 8, White-eared Bulbul 40, Red-vented Bulbul 5, Isabelline Wheatear 1, Common Myna 15, House Sparrow 60,
Back at home, I was able to listen to the call of the Pallid Scops Owl on Xeno Canto and am happy that this is what I was hearing. With a couple of pairs resident in the vicinity, it would be too strict for me to deprive my list of the Pallid Scops Owl. I confess that if I didn’t know that the owls were commonly seen  at that particular spot, I may not have been able to identify it, but since it is documented as the likeliest owl to be seen and with a definite call heard, I can afford to be less anal than usual.