It is strange that I have resisted making a visit to Ras Al Khor Wildlife Sanctuary in Dubai until now. I spent a thoroughly pleasant couple of hours there in this second week of October and looking back, it is difficult to pin down a reason for my previous reluctance. Getting there and back was slightly awkward, but at least it was open. 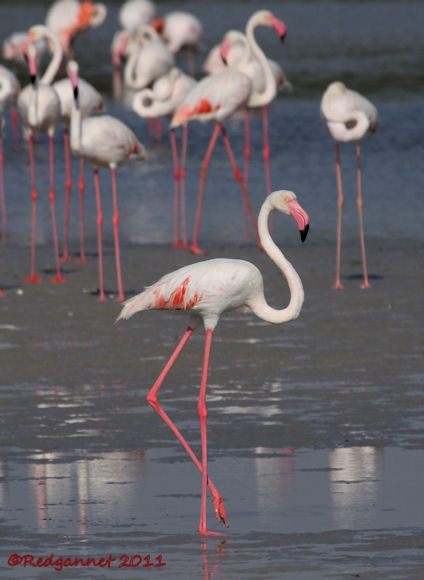 Here are a couple of facts for the visitor before we start. I want to highlight these as they are important but not well documented. The Sanctuary is open from 09.00 until 16.00 daily, but is closed on Fridays. It is possible to see birds from outside the perimeter fence, but that would be a sad alternative to a place in one of the hides during opening hours. 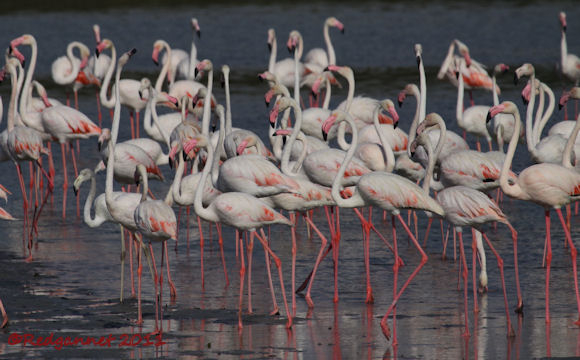 The roads surrounding the sanctuary are busy 4-lane motorways with no crossing points in case you find yourself on the wrong side. Taxi drivers are not all acquainted with the sanctuary and it is not signposted, so for their information, the southern tip of the lagoon is marked by the interchange of Oud Metha Road (Route 66) and Ras Al Khor Road (Route 44). Use the Emarat petrol station on the south-bound carriageway of Oud Metha Road as a marker for the Flamingo Hide on the opposite side (Google Earth ref; 25 11 34N 55 18 44E). 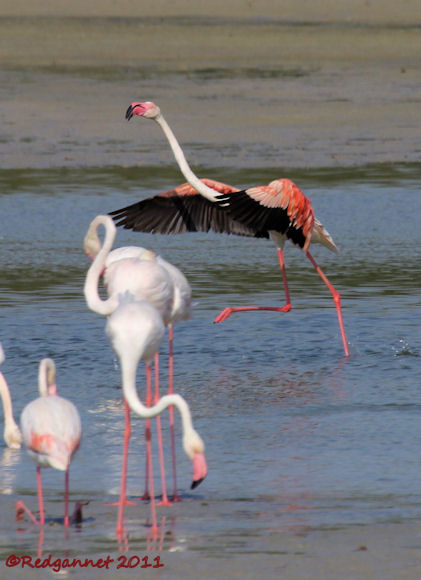 Ras Al Khor is a 620 hectare complex of intertidal mudflats, lagoons and mangroves at the top end of Dubai Creek. It is internationally acknowledged with its RAMSAR Wetlands Site status and provides a staging post for migrating and wintering birds with up to 20,000 birds present at its peak season during the winter. There are 3 hides; Mangrove Hide is accessed from Ras Al Khor Road, Lagoon Hide which has been closed recently due to construction work around it and Flamingo Hide which is described in this post. 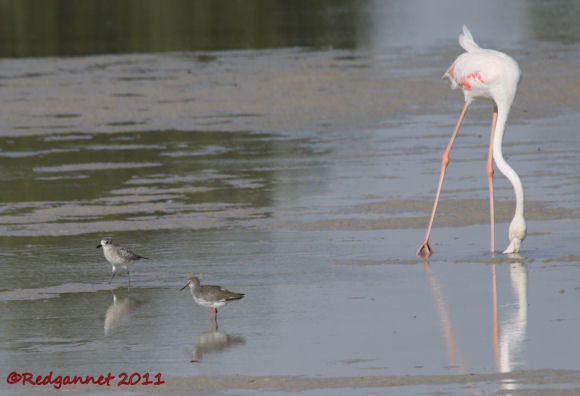 I found myself at the petrol station on the wrong side of the motorway and had to skip smartly across 8 lanes and a central barrier to get to Flamingo Hide. I had missed the tide by a combination of over-sleeping, having to shop for sun-block and by selecting a taxi driver that had not heard of Ras Al Khor. As it was, the water had retreated a little, but the Greater Flamingos were still close enough to the hide to give good views. 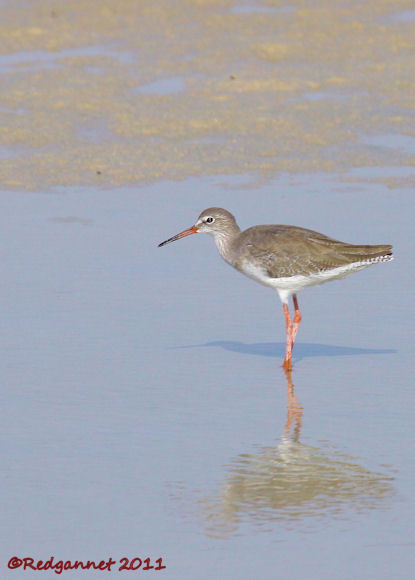 Other birds around the hide included Little Stint, Lesser Ringed Plover and Common Redshank. Further out, Black-bellied Plovers and a couple of Eurasian Curlews could be seen. A friendly security guard has charge of a spotting scope which he encourages visitors to use but this is packed away by 15.45 in anticipation of his knocking off time. Through the scope it was possible to see Greenshank, Whimbrel and a larger congregation of assorted waders in the distance. 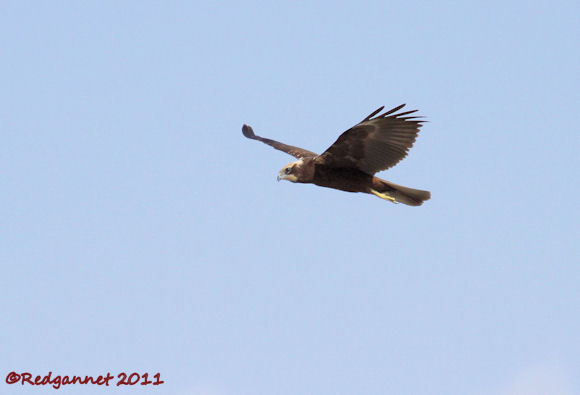 Overhead a Eurasian Marsh Harrier patrolled the lines of mangroves hoping to catch a smaller bird unawares. An Osprey flew by but looked as if it was heading for deeper water to hunt.
For the most part, the sanctuary was very quiet apart from the rumble of traffic behind us. I shared the hide with the guard and a gentleman, Shafaat, who had come to the hide seeking solace and inspiration from the natural setting. A few other visitors popped in as we watched, but few stayed very long. We were reticent to leave at 16.00 when the guard began his locking up preliminaries. The flamingos appeared to know that it was chucking out time and began approaching the hide and moving towards the road along the screen that covers visitors’ approach to the hide.
There is a drinking water fountain in the hide, but no toilet facilities which may explain some accounts of security guards (who have been on duty for at least 7 hours with no relief) being slightly grumpy come closing time. Our guard today was very pleasant I would like to add. 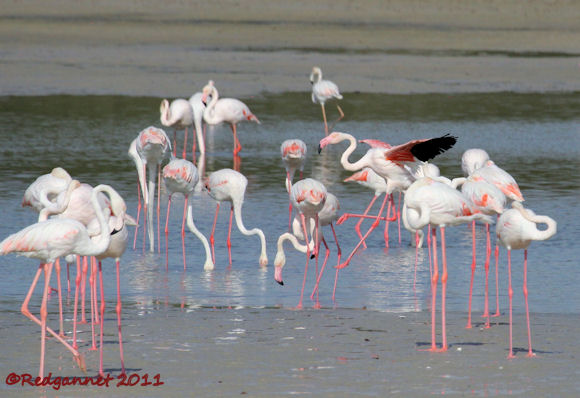 To get to Ras Al Khor, I took the Metro train to World Trade Centre. From outside the nearby World Trade Centre Hotel , bus number 61 leaves from the stop (Google Earth ref; 25 13 38N 55 17 24E) on the 2nd Za’abeel Rd. I wasn’t sure of the schedule and took the opportunity to hail a cab which immediately turned round and took me the other way, taking half an hour to complete what should have been an easy five minute ride (Tip for next time; bring the name of the place you are visiting, that would have been useful in the increasingly hot backseat of the cab. There are two Emarat petrol stations on Oud Metha Rd. If you can’t see mangroves or flamingos, you are at the wrong one).
My plans for the afternoon had not got as far as figuring out a way to get home from Ras Al Khor, but I was very lucky that Shafaat lived close to a Metro station and very kindly offered me a lift. In other circumstances, I would have had to rely on flagging a taxi down on the busy motorway. Bus number 61 has a stop at the petrol station across the road, but that will take you in the wrong direction. It would have been my fall back plan to board this bus, wrong way or not and take the return journey back to the Metro station at World Trade Centre. If anyone has any other suggestions, they will be gladly received. 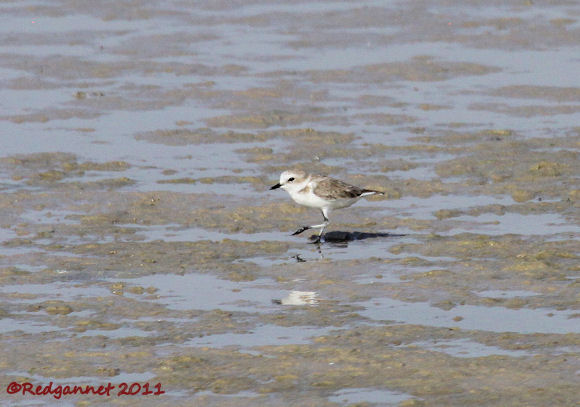 
Other Redganet posts from Dubai can be found via the links below and through the dedicated Middle East Page.