Serro do Cantareira is the largest urban forest in the world, but it is closed to the general public during the week and only accessible to walkers, picnickers and birders from 08.00 at weekends. This is less than ideal if your only day off is on Friday, or if you prefer your forests to be a place of peace and contemplation in the early hours.
I maintain that polite enquiry, or gentle charm in the face of refusal, will open more doors, wider than huffing and puffing ever will. To this end I contacted the park authorities explaining that I was an international visitor and that my opportunities were limited. Permission was quickly granted and the offer of a guide who would meet me at the gate at 06.30 was enthusiastically accepted. 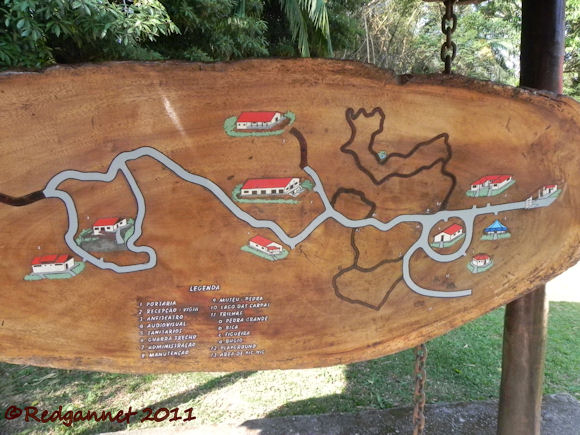 The commuters of Sao Paulo were already thronging the metro by 05.30, but I was travelling against the flow and arrived at Jardim Sao Paulo station by 06.00. A Reas20 (@R2.60 = £1), 10 minute taxi ride got me to the entrance in plenty of time to meet my guide and I was allowed through the control gate (Google Earth ref; 23 27 17S 46 38 08W) where I occupied myself by watching Burnished-buff Tanagers, and Dusky-legged Guan while I waited.

Diego arrived and proved to be a very amiable English speaker who is obviously well-liked by all his colleagues. He is not a professional bird guide, as evidenced by his fees, but he is familiar with the 8,000 hectares of forest that is in his charge during his day job working as a biologist at Cantareira State Park. 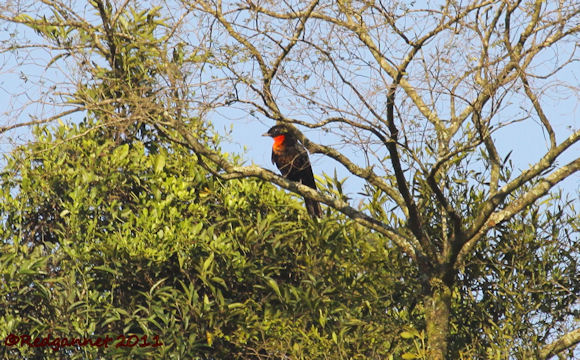 We drove to the park administration building and started our morning by birding around the small lake there (Google  Earth ref; 23 26 51S 46 38 01W). Birds were abundant with 5 lifers coming in a short walk along the bank and through a stand of trees. An unmistakeable Red-ruffed Fruitcrow was seen in the distance, sharing the treetops with a Surucua Trogon. An Olivaceous Euphonia was quickly identified by Diego who also made the call for the Planalto Woodcreeper and the White-throated Woodcreeper. 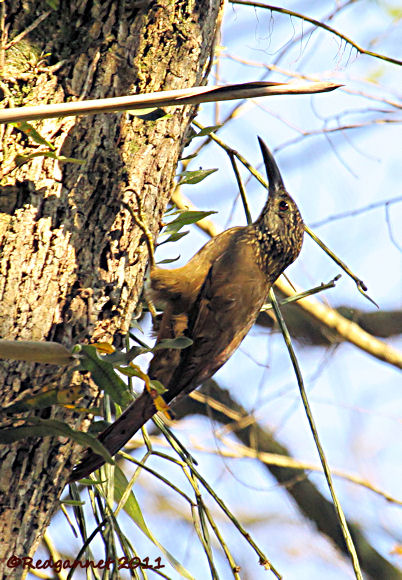 The Black-crowned Tityra was not a bird that he had seen here before and we had to check it in the field guides. Before he dragged me away from the administration area, Diego showed me a Yellow-fronted Woodpecker which had cut a double-entry nest hole into a tree by the administration building. An inquisitive Streaked Xenops was peeking in through the lower hole, but the larger woodpecker soon put it to flight. 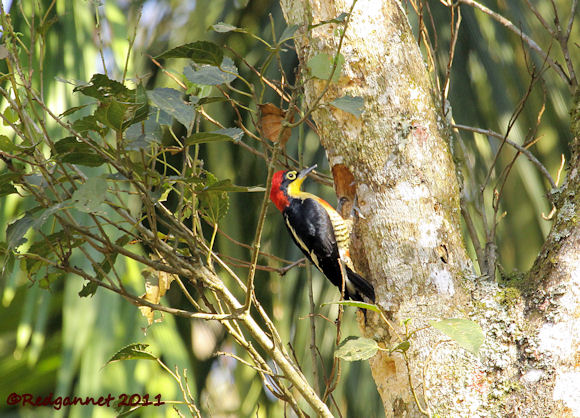 On the main road, Diego pointed out a Blue-backed Manikin that he suspects has been showing off at a lek close to the junction and stopped suddenly as a Solitary Tinamou melted back into the forest from the verge. A tiny bird flew into a tree above our heads and I would have struggled had Diego not called a White-throated Spadebill. Further along, a tree reaches out over the road and has been used as a nesting site by a pair of Surucua Trogons for the last three seasons. 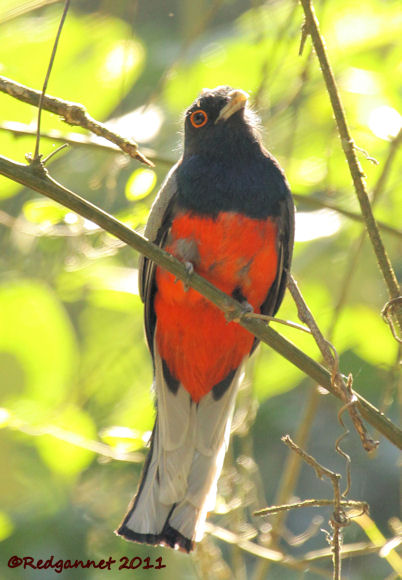 Both parents were close to the nest. There is something mystical about Trogons in my experience. I have never seen one fly; they seem to appear from nowhere and disappear in an eye-blink without crossing any intervening space when doing so. 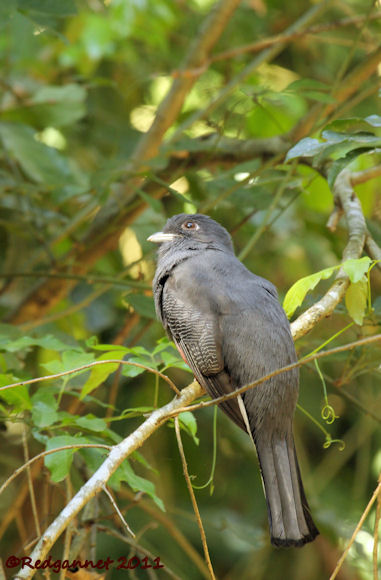 Female
Next we went on to Lago das Carpas at Google Earth ref; 23 25 25S 46 38 06W. This is a very picturesque lake (probably with carp in it) with a children’s playground and toilet facilities. I didn’t pay a lot of attention to the Least Grebes on the water and only realised that they were life birds when I got home. I was concentrating more on a flycatcher that may or may not have been a red-crayon  Swainson’s Flycatcher. It was not possible to separate it from the Short-crested Flycatcher, which would also have been a lifer. A Rufous-collared Sparrow sat for a moment and was unmistakable in the sun. 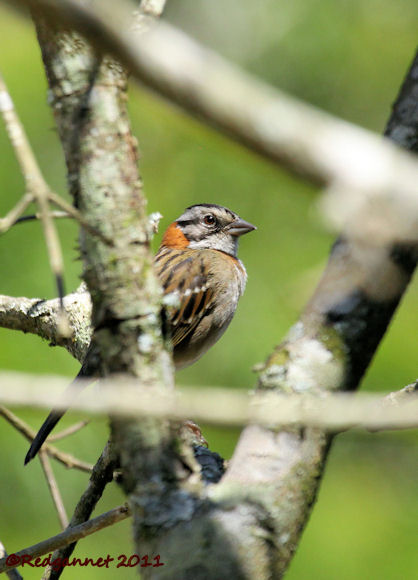 The full tour of Cantareira’s Pedro Grande Nucleo would not be complete without a visit to the eponymous big stone. From here a view can be had out across Sao Paulo and I wondered why people would leave the city and come to a forest so that they could look back at the city. Pedro Grande however is the park’s most popular feature and a bus spilled a group of tourists out onto the hot rock. 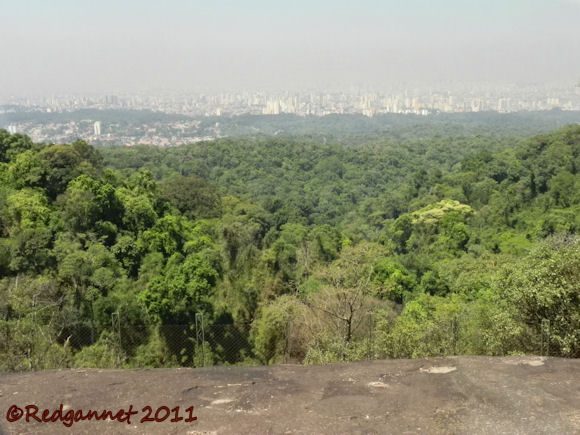 Diego had to work in the afternoon and left me in the forest near to the trogons’ nest. I settled myself in the shade hoping that they would return, but they probably spirited themselves in and out as I did not see them again. Black Vultures circled overhead and made a few low passes, close enough for me to hear the wind in their wings. Only when they began to settle in a nearby tree did I realise that they thought that my supine inactivity might mean that it was time for afternoon tea. During my vigil, rustlings in the dry leaves of the forest floor attracted my attention. Mostly, they were Solitary Tinamou turning the fallen leaves as they passed by, but one sound in particular, that called to mind something being dragged through the leaf litter, set my imagination into overdrive.
During the previous day, Diego had been called out to assist in rescuing a Puma that had strayed from the forest into an adjacent plantation and had been scared up into a tree when felling started (the puma was up the tree, not Diego. Just wanted to make that clear). My mind was full of pictures of a large cat dragging its prey though the undergrowth behind me. The excitement mounted as the creature came closer and closer to the road until at last a huge monitor-type lizard emerged, dragging its long tail behind it. 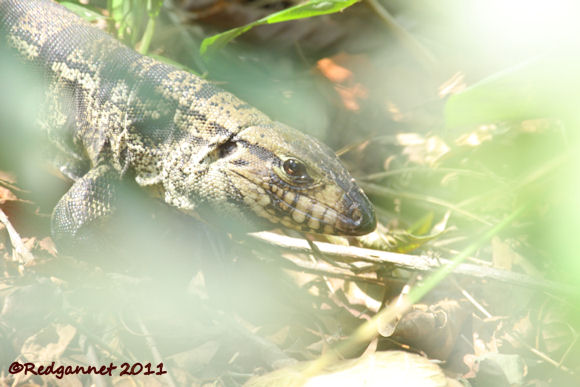 The walk back to the control gate was about 2 kms or so and I stopped frequently to look and listen. One hot spot was close to the junction with the administrative building turn off. There is a small building beside the road with a greenhouse behind. Berry bushes and fruiting trees were attracting,  Pale-breasted Thrush, Yellow-legged Thrush, White-throated Thrush and the ubiquitous Rufous-bellied Thrush. 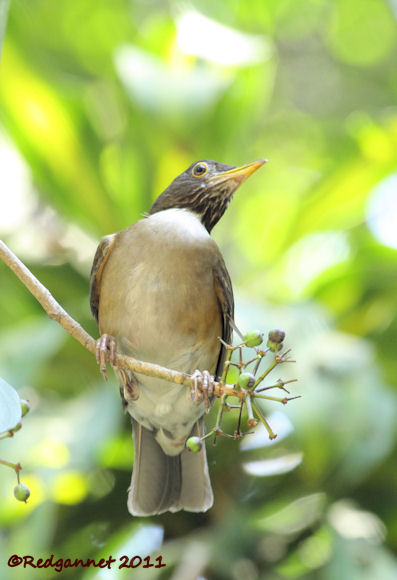 Also feeding here were Ruby-crowned Tanagers and Blue Dacnis. A Red-eyed Vireo was calling. Strangely its song was slightly slower than I was used to and its eye was dark. I believe that the Brazilian version of this species is known as the Chivi Vireo, but I would be pleased to hear from anyone who can confirm that or put me straight. 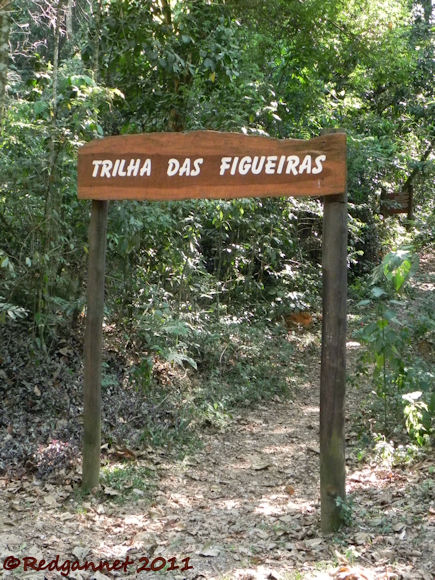 As I came closer to the entrance of the park, a few well-marked trails cut away from the tarmac. I followed one, the Bugio Trail, intending only to venture a short way along it, but as I turned to retrace my steps back to the road a shrill, “You  tWIT” called me back.  This is where the confusion started. I assumed that the bird kicking around in the leaf litter was the one that had made the call, which was so like that of a Northern Bobwhite. This planted the seed that it must be a bobwhite. However, the Crested Bobwhite, which is the only Brazilian candidate, would be 2,500 kms out of its accepted range and in the wrong habitat. In a reply to my email, Diego suggested that I consider Spot-winged Wood-Quail and after enhancing and super-zooming a dreadful picture, I will side with him. After comparing my recording with accepted examples on Xeno-canto, I am happy that it was not a Crested Bobwhite, but the call was not that of a Wood-Quail either, so remains a mystery.

The Bica Trail starts from beside the control gate and I had saved this short, circular path until last so that I could better time my departure from the park when the gate closed at 17.00. A few hefty thumps reminded me that I had once seen a Blonde-crested Woodpecker along this trail and I was very keen to see this spectacular bird again. Sadly just at that moment, a group of school children came round the corner, screeching and pulling at my binoculars for a go. 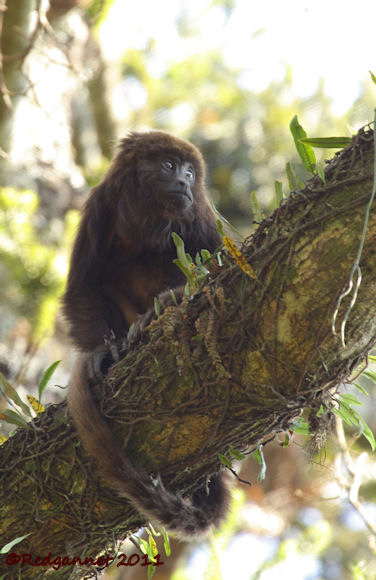 Once the children passed on, the Howler Monkeys started calling directly overhead, making the kids’ noise pale in comparison. In truth I didn’t miss anything. The hefty thumps that I had mistaken for a woodpecker pecking were actually from the Howler monkey which makes a few separated cracks as a warm up before increasing his frequency and intensity to create his deafening roar. The trail on this occasion will be remembered for producing a Red-crowned Ant-tanager. 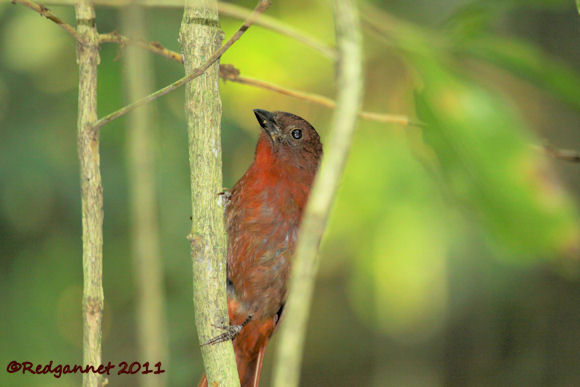 It may be possible to gain special entry to the park outside of the normal public hours with a park employee/guide. Previously I have been able to visit the park at 06.00 on a weekday, but Diego, my guide on this occasion, has moved on to a different section. He has sent me a link to his friend and colleague who may be able guide you at a time more conducive to birding.
Contact Daniel at;
danielsilvaindio@gmail.com

Take the Metro to Tucuruvi. Take a taxi from here and show the following address to the driver to make sure that you are going to the right place;
Rua do Horto, 1799 – Tremembe – Parque Estudial da Cantareira – Nucleo Perda Grande.
From the small open area in front of Alberto Lofgren Park, keep right and continue to the top of Rua do Horto where you will see the park gates at Google Earth ref; 23 27 17.41S 46 38 8.27W.
On return, it may not be possible to find a cab, so make your way back down the hill to the small open area in front of Alberto Lofgren Park. Here you will find a stop for bus number 2470 which returns to its terminal at Metro Station - Parada Ingles for 3 Reas.