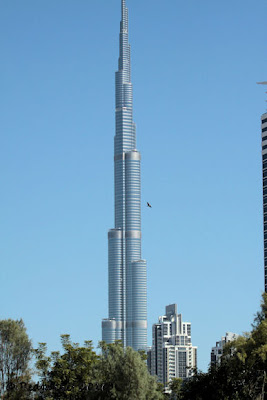 Safa Park had not featured on my list of things to do during a trip to Dubai, but a series of failures left it as the favoured option for exploration.
It is a city park, much like any other park in any other city, in that it has extensive lawns, picnic areas and playgrounds for the children. A few tell-tale signs that it is located within the Emirate of Dubai are a Ladies’ Garden and the towering pinnacle of Burj Khalifa which is visible from anywhere in the park.

I was not in a positive mood this morning and had resigned myself to seeing only the common and conspicuous species. I had never heard of the park before and did not realise its potential.

Those who have ever gasped at the electric blue of a roller’s wing will understand how my day brightened when an Indian Roller flashed across the path and into a tree across the lawns. If ever a family of birds were designed to be conspicuous and to lift a mood, it is the Coraciidae.


Even at rest, they are impressive birds with turquoise, lilac and cinnamon plumage and they sit out on prominent perches to scan for insects. If that isn’t obvious enough, when they fly, patches of the most dazzling blue, separated by a swathe of indigo flash from the primaries, primary coverts and tail. It is enough to take anyone’s breath away. How I wish that I could have captured even a taste of the colour sensation that is a flying roller, but instead I must thank, Arjun Haarith for allowing me to use this wonderful photograph. 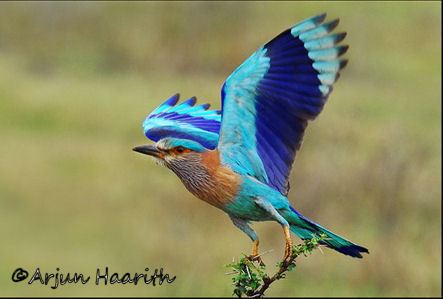 The camera was to hand now in the hope that I would get another chance, but instead a Graceful Prinia sat up in a patch of marigolds to give my colour receptors a work-out. A Bluethroat was flitting in and out of the hedge alongside the flowerbeds. How typical that I waited all year to find one, then saw them on two consecutive trips. 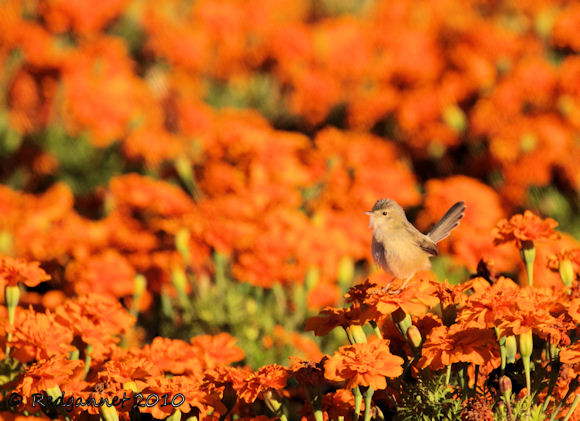 Common birds that were to be expected in a park such as this were White-eared Bulbuls, Red-vented Bulbuls and Common Mynas. I had decided that any corvids seen would be counted as Brown-necked Ravens, but had forgotten to take House Crows into account.
The Ladies’ Garden looked the birdiest area that I had seen so far, but signs barring entry to bearded birders, left me peering keenly through the railings in a manner likely to cause any ladies within some discomfort. Luckily there were none, but an Isabelline Shrike, Asian Pied Starling and a Song Thrush made me wish that I was bold enough to sneak in while no-one was looking. 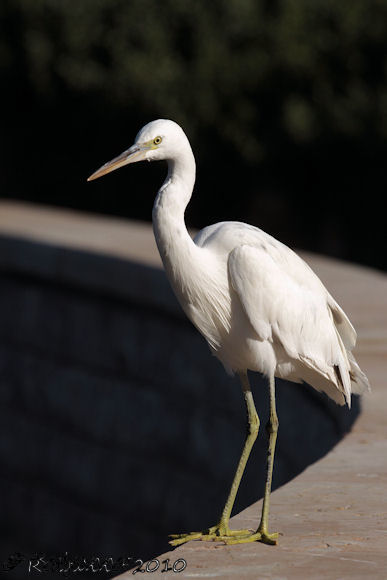 In the centre of the park is a waterfall that feeds through a channel into a boating lake. A stocky-looking egret was a white form of the Western Reef Heron. The slight droop to the strong orange-based bill, yellow/green legs and occasional dark smudges on the white plumage sets this form of the species apart from the more elegant egrets. Normally it prefers the coast, but Safa Park is within a mile of the shore and the water here had a salty smell to it. 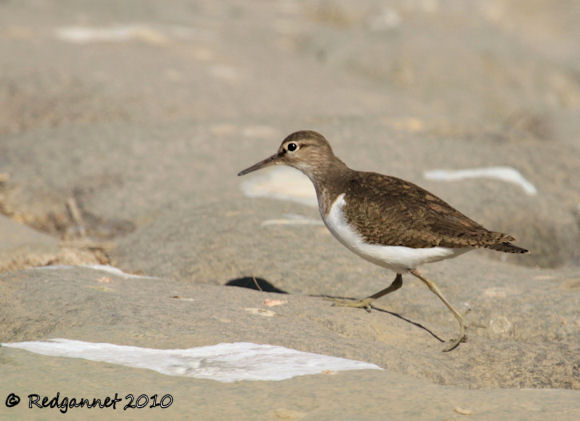 A Common Sandpiper and a Greenshank were feeding along the edge of the channel. The Greenshank seemed to be having trouble on the slippery stone and slipped twice, losing its footing and almost falling in. 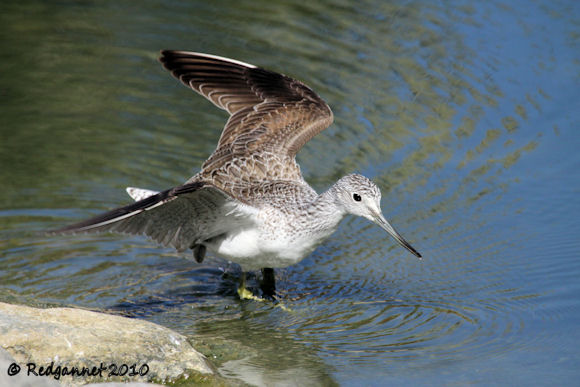 A “Graaaak” above, caused me to look up. The grating call of the roller has prompted suggestions that they should be allied with the Jays. They must have spent too long in the ‘pimp my plumage’ line and missed out on the vocal training during the time of the Great Creation.
Rollers were rolling! Three birds were participating in the display over the boating lake. They rose to about 30 m, then, as if at the top of a rollercoaster drop, they folded in their wings, using their upward momentum to coast over the summit of the climb and plummeted, jinking and flashing their magnificent colours as they fell. They finished with a flare and a flourish, landing in a group of palm trees where, presumably, a female perched in judgement. 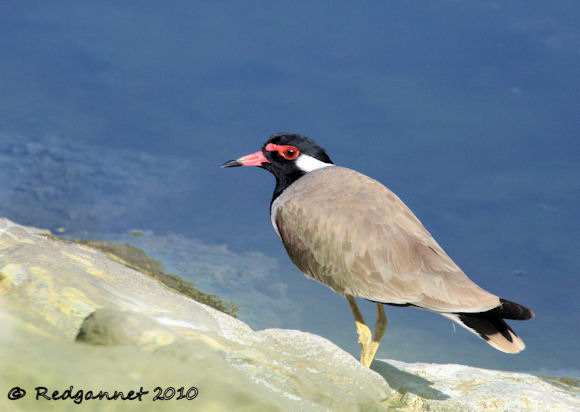 Back on the ground, in the realms of normal, muted colours, some Red-wattled Lapwings were sitting out the midday hours by the edge of the channel. The waterfall is artificial with the water pumped up a small hill to cascade back down into the foamy pool. Beyond the hillock, is a fenced freshwater lake that held a few ducks including, a Gadwall, some Common Teal and a few Northern Shovelers. I have no reason to think that the provenance of the ducks might be in question, but the Egyptian Geese were possibly from feral stock. Common and Wood Sandpiper were feeding on the banks and Black-headed Gulls were roosting on the grass and drifting on the water. 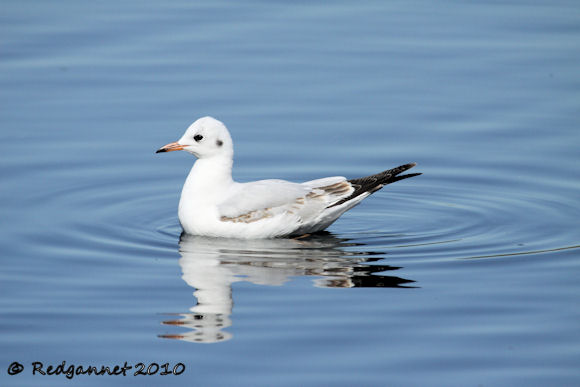 As I left the park, another “Graaak” made me look up to see another five rollers displaying from the road signs on the motorway into Downtown Dubai. I wondered if it was not a little early to start the courtship displays. Information that I can find suggests that February was the time for rolling. Perhaps it was excitement as 2010 drew to a close and a new year approached. The pyrotechnics from the Burj Khalifa were spectacular at midnight, but as 2011 dawned, the rollers’ day-time fireworks would continue without property crashes and bail-outs from neighbouring Kingdoms.
Birds species; 33 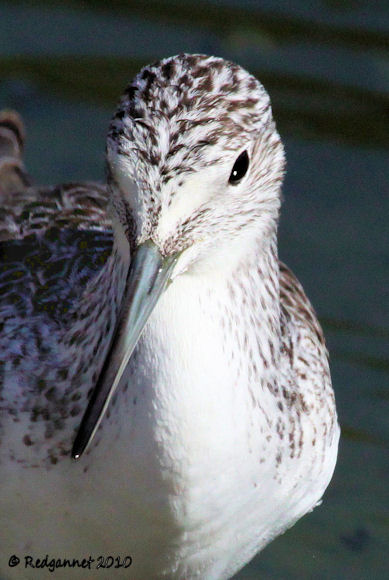 Safa Park is within easy reach of Downtown Dubai and about 10 mins in a cab from the Emirates Mall on Sheik Zayed Road, the main drag through downtown. In the perimeter railings, there are 4 gates which open 08.00 ‘til 23.00. There is a 3 Dirham entry fee. On Tuesdays, the park is restricted to ladies and children only. A fenced and hedged section at the west end of the park is reserved full-time for ladies and children.
A little known author, Charlie, from 10000 Birds was lucky enough to visit Safa Park in May 2005 and catch the migrants as they passed through. I must give him and his friend Steve James a nod for the Willow Warblers. I was really struggling until I saw Steve's ID info and Charlie's picture of the yakutensis form.
I also find that a site called http://www.uaebirding.com/birdingsites.html exists. Like Charlie's post, I didn't see it until after my return, but if anyone is thinking of a trip to UAE, this should be your first port of call for information about sites and birds that may be seen there.
Posted by Redgannet at 22:55