The ground was beginning to poke through from its suffocating blanket of snow and the newly revealed leaves were being scratched over by a flock of White-throated Sparrows. 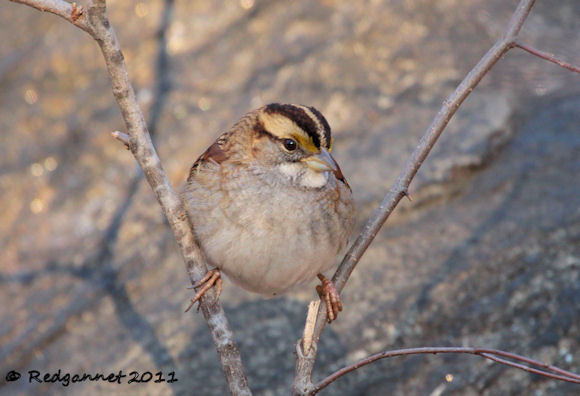 The workers in New York’s Central Park had done a great job of keeping the park accessible, though there was still a little ice to be cleared from the paths. The snow had been sitting for a while now and had developed a crisp surface that was impenetrable for the sparrows, so they had to find clear spots to forage. 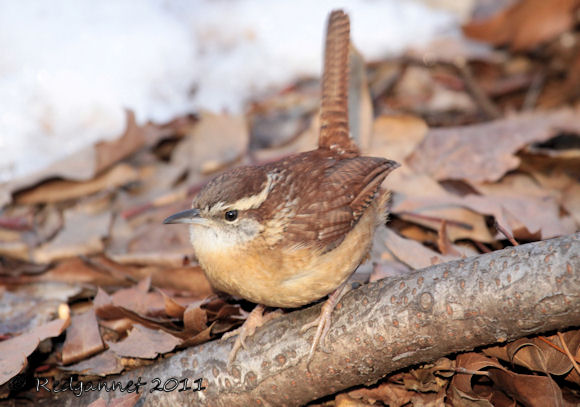 A Carolina Wren called and allowed a very close approach as it posed for a picture.
They were accompanied by many other species that one might expect to see in Central Park including, White-breasted Nuthatches, Black-capped Chickadees, Tufted Titmice, American Goldfinches, Northern Cardinals, Blue Jays and a Fox Sparrow that stayed aloof from the white-throats, feeding by itself and remaining within a very small area. 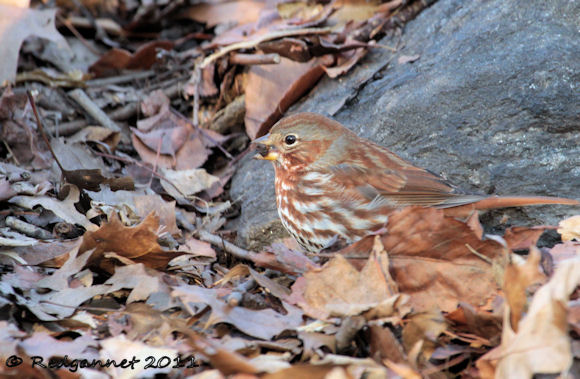 A volunteer group (known in Marie Winn’s book ‘Redtails in Love’ as “The Regulars’’) maintain a feeder station close by, but this large party of birds kept me entertained until the cold in my toes prompted me to move them along. I headed towards the well stocked feeders and watched for a while. All the previous species were present as were Downy and Red-breasted Woodpeckers, Red-breasted Nuthatches, Dark-eyed Juncos and of course, wherever there are feeders, you will find Squirrels. 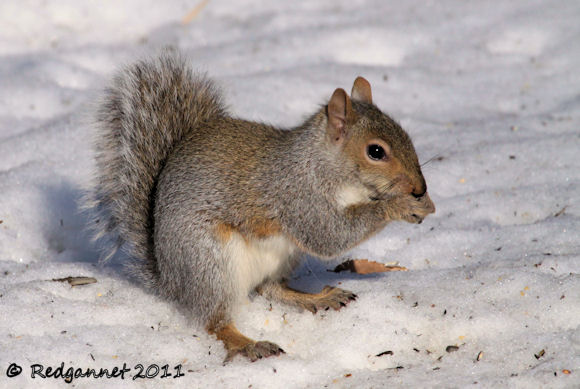 Each time I visit the feeder station in Central park, The Regulars (if they still go by that name) are trying out new ways to stop the squirrels from spilling all the feed onto the ground and losing it to the snow. Don’t think that the squirrels are being excluded, there is plenty of free scattered food on the ground already that they can take advantage of, but the rest of the feed needs to remain accessible when the next fall of snow comes. 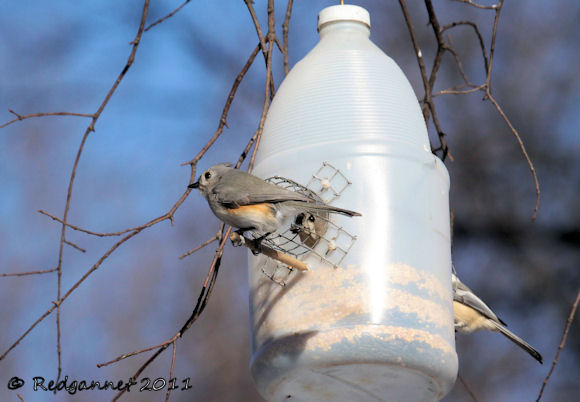 All the water sources in the park were still frozen over and the birds resorted to eating the snow. I wondered what this Brown Creeper was doing out of his tree, but didn’t see the ice in its mouth until I was editing the photo. Remember to leave out water at your feeders as well as food. 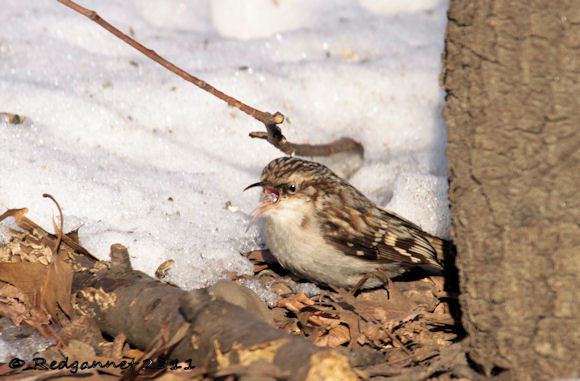 A small striped bird on one of the plastic containers made me consider Pine Siskin for a moment (one had been reported and it was still fresh in my mind). I felt that it was smaller and slimmer than a House Finch, but as an out-of towner, it sometimes takes me a while to get my eye in. I did not see its bill, nor did I see any yellow. 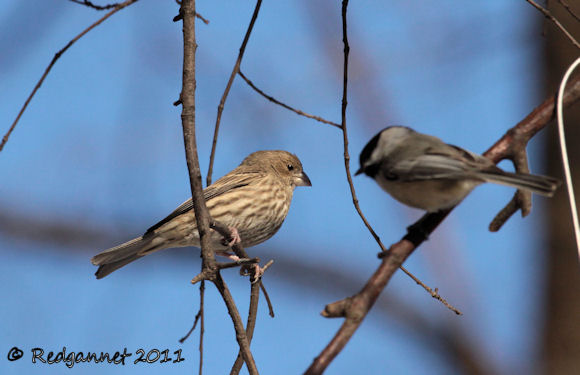 Suddenly all the small birds ducked for cover as a Cooper’s Hawk flew in and settled high in a tree overlooking the feeders. I had the strange feeling that the buffet had been set and the diner had now arrived. 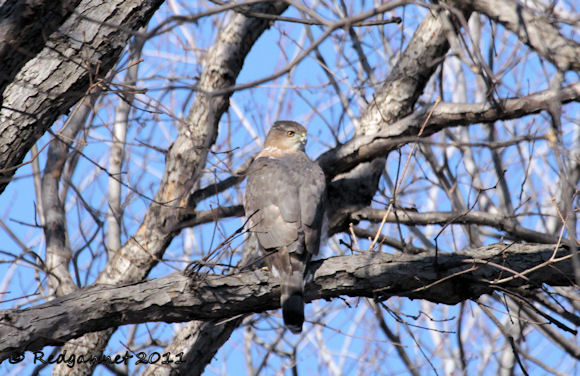 The bold Tufted Titmice were the first to return under the gaze of the hawk. They were followed by chickadees and goldfinches, but the nuthatches were reluctant to come back while the danger lurked. 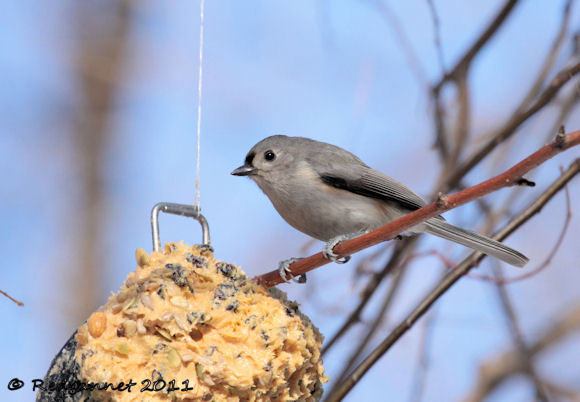 I am not familiar enough with North American feeder hierarchy to make this as a statement, just an observation. There did seem to be a pecking order among the species with Tufted Titmouse claiming seniority over the chickadees for example while the larger size of the woodpeckers gave them rights to the seat at the head of the table. 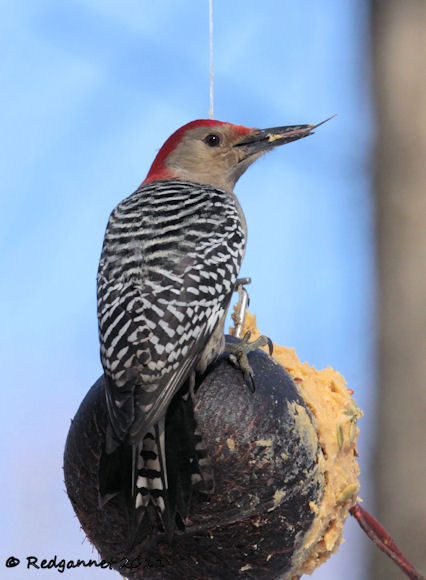 Within species (notably the American Goldfinch on this occasion) there was also competition, with the rights to a black-seed sock being hotly contested. 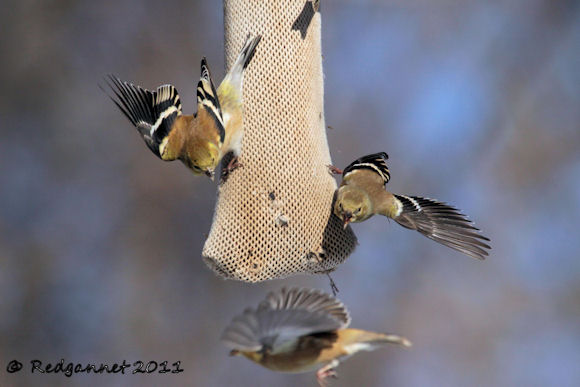 There were other out-of-towners in the park today. A Varied Thrush had been reported back in November and was said to still be around, remaining faithful to the area close to the facilities at Maintenance Meadow. A birder was there before me and was peering intently at something. It was not the thrush, but as he turned to move off, a bird flew across the meadow, flashing an orange crescent in her wing as she went. She landed high in a tree on the other side, but was still visible enough to confirm as the Varied Thrush (This photo has been photo-shopped to remove obscuring branches. Hence the PS). 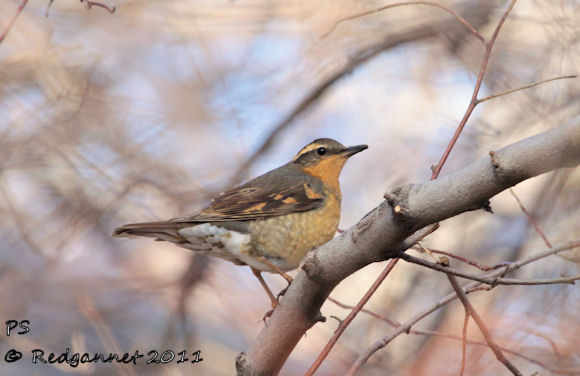 A while later, as a small group of birders began to gather to see her, she flew down out of the tree and into the spot where she is most frequently seen, to the right of the toilets. Now I was able to see her better and confidently put her down as a female. A few other birders passed as I watched and one invited me to join him as he went looking for the Red-headed Woodpecker, another out-of-towner that had extended its stay.
This was Matthew (of Prothonotary Warbler fame). He works at the New York Public Library although his status there during migration changes from employee to rumour, he tells me. He was looking for additions to his fresh 2011 list during his lunch hour and was able to put me right on a few pronunciation issues. I suffer from Irritable Vowel Syndrome which provokes me to extend, shorten or 'round-mouth' a syllable without warning and without regard to local custom.
'Kall-ee-ohp' for example is actually 'Kah-lye-oh-pee', as in the hummingbird and imagine how English 'prothonotary' must sound when every 'O' is pronounced long as in 'home'.

We were headed to an area north of the 66th St. crossway at the south-east corner of Sheep Meadow. On the way, a couple of Peregrine Falcons cruising on the west side of the park caught our attention. As we watched, it occurred to us that we were looking at different birds and that there were 3, or even 4 falcons there. 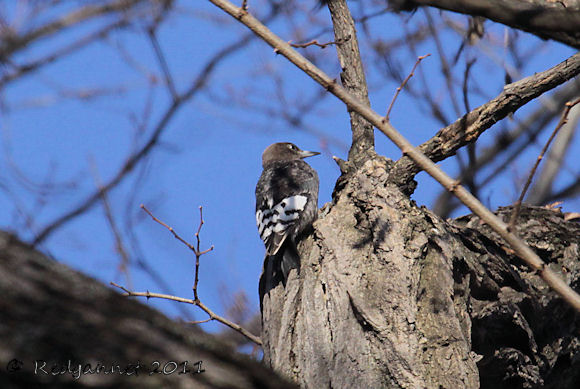 Matthew gets the credit for spotting the woodpecker, which disappeared into a hole in the branch of a Locust Tree shortly after. In one of the photos, a few red marks were just visible as this young bird starts to take on its adult plumage. Matthew had to get away to renew his acquaintance with the library, so I began to head home. 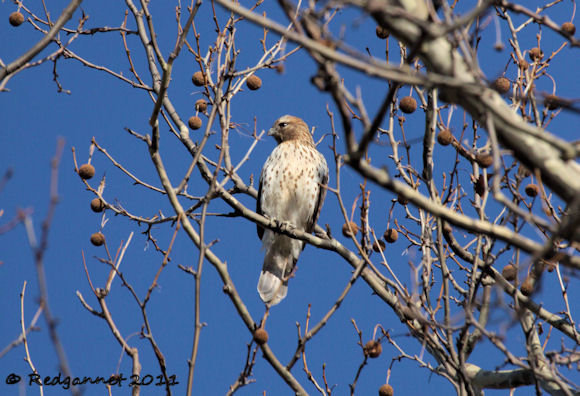 A Red-tailed Hawk flew over and landed in a tree close by. One of the parks many visitors that feed the birds with nuts and scraps thrown to a waiting throng was just beneath the hawk and I wondered if it had stopped to see if any slow, nut-filled birds were ripe for the picking. 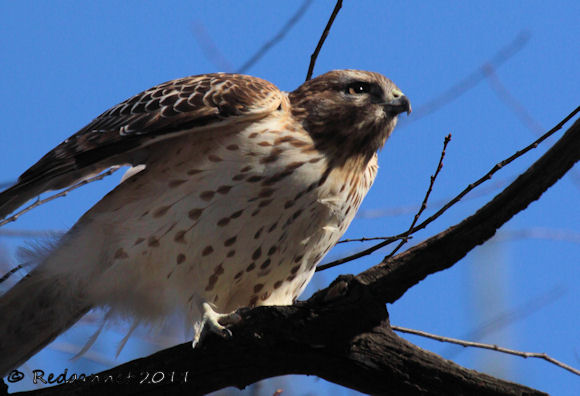 These pictures may be of interest to the many enthusiasts that follow the movements of the hawks. I heard that Pale Male’s mate has not been seen since mid-December and the young birds are being eagerly tracked by the followers. This young one has yet to show any red in its tail.

I joined Joe, who was feeding the birds from a rock south of the crossway and sat a while, trying to get a photo of a Blue Jay, but they retrieved the peanuts too quick and were gone before I could focus. 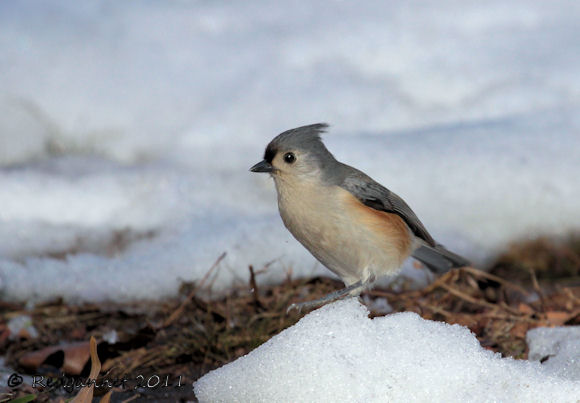 Tufted Titmice and White-breasted Nuthatches were both bold enough and kind enough to wait until I had time to compose the shot. 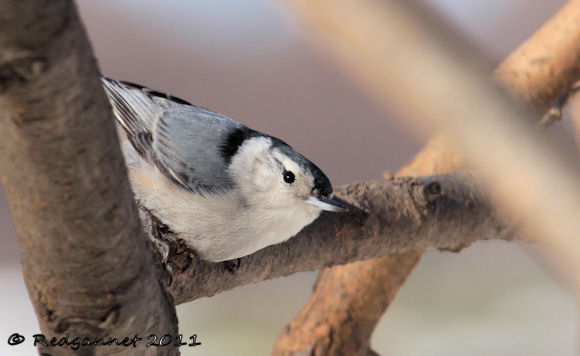 Joe was the third person feeding the birds and animals that I had seen today in Central Park. I would like to sing their praises and acknowledge the contribution that they and the millions of individuals and groups that keep feeders, make to the survival prospects of the fauna when the weather turns inclement.