I must confess to having doubts when the taxi driver dropped me outside the public lavatories in a remote village. Despite his insistence, it seemed unlikely that this would prove to be a birding hot-spot. Some confusion had arisen about the name of the site. 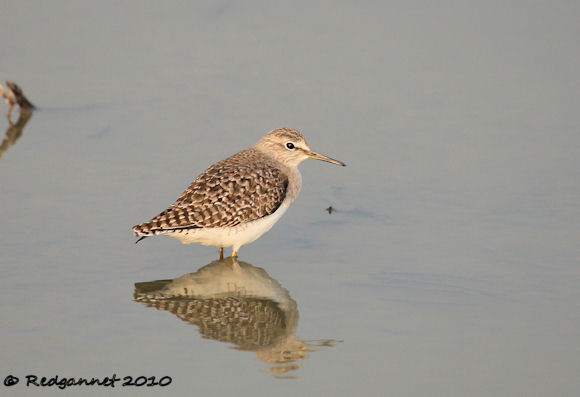 To the ex-pat birders that come here it is known as Long Valley, but the Chinese, who have a proprietorial interest and the advantage of numbers, call it Yin Kong. A Chinese birder that I had met in Tai Po Kau the previous morning had attempted to explain in a foreign tongue and sent me to Long Village, which is a big housing estate with no birds. Don’t go there. 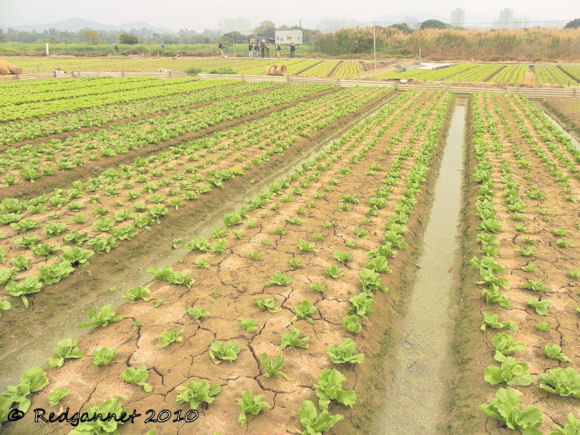 I was still unsure as I took a tiny path that led down through the lettuces into an irrigated agricultural area. Ladies working the fields pointed and laughed (I find women do that a lot. Is it just me?). They cried “Look the birds. Look the birds”. Ahead was a wet paddyfield with Little Egrets, Chinese Pond Herons and Wood Sandpipers feeding in the shallow water. Before I could get my binoculars to my eyes, another birder came round the hut in front of me, putting all the birds to flight. 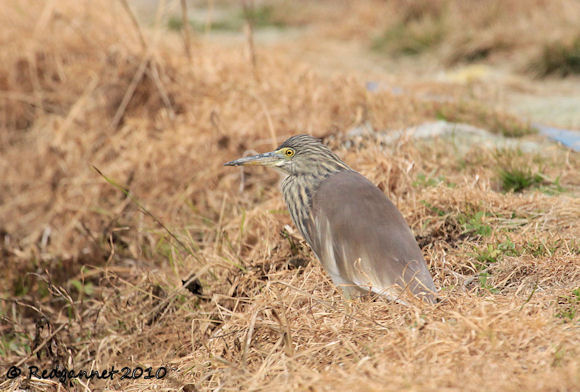 Another twitch was in progress as Hong Kong’s first ever Red-headed Bunting was reportedly on site, but far from the good-natured camaraderie of yesterday’s watchers, there seemed to be a competitive, edgy atmosphere this morning which did not show the birders at their best. I guess it is a little naïve to expect that with a ‘national first’ in the vicinity, birders would have much time to stop and exchange pleasantries or information. Still, at least I knew I was in the right place now. 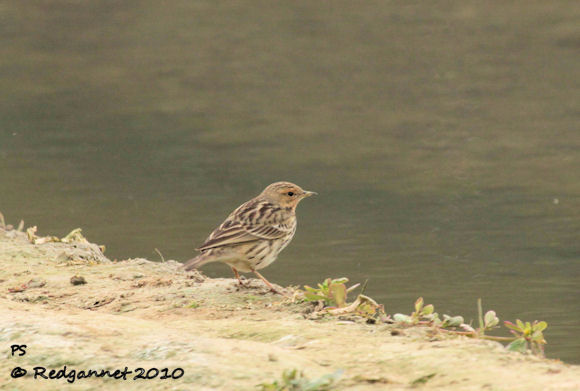 Long Valley is a broad flat plain dotted with irregular allotments growing lettuce, rice and watercress (I imagine that the produce changes seasonally) in well watered sections and the birds seem to love it here. A large flock of White-backed Munia were clinging to the seedheads in a rice field, while Little Ringed Plovers and Red-throated Pipits (PS in the photo above indicates that a bit of ugly scenery has been removed with a Photo-Shop type of software) fed in cleared patches. I caught up with the birds that had been flushed earlier and added Black-winged Stilt to the list as well. 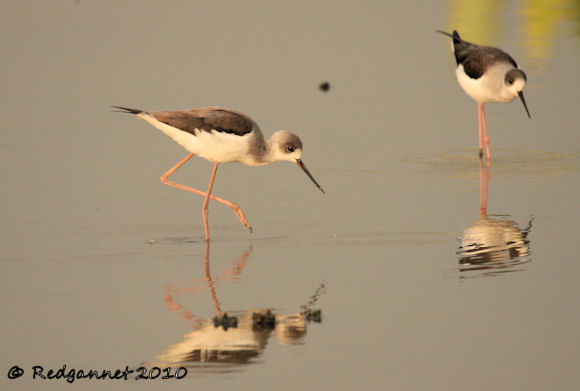 In a section which has been left to go wild, reeds and long grasses held prinias and cisticolas. Plain Prinia was most numerous in the thinner vegetated areas while the Yellow-bellied Prinia preferred the thick cover of the grasses. 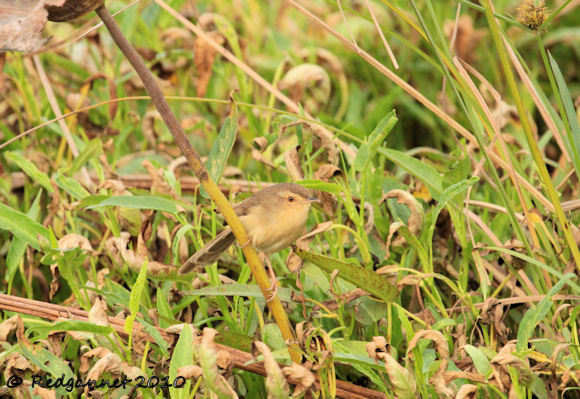 A couple of birders were looking very intently at the cisticolas. They were looking for a Bright-capped Cisticola. This bird is different from the far more common Zitting (Fantailed) Cisticola in having a longer tail which lacks white tips and a grey-cheeked, white-throated head with no noticeable eye-stripe. Its black and grey crown may be raised slightly. I had the red crayon ready to mark this one in, but found that I had seen it before under the name of Golden-crowned Cisticola in Papua New Guinea. 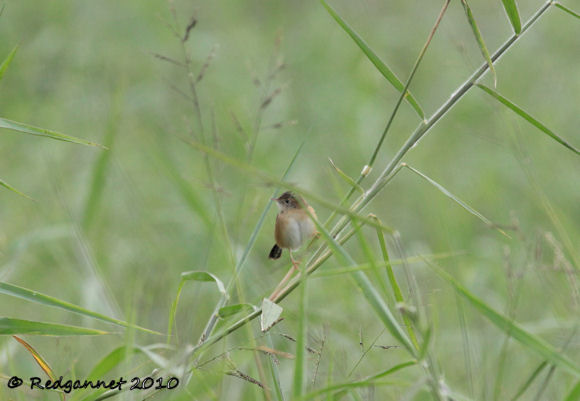 I cannot say if this rank area is part of a crop rotation scheme, perhaps it moves periodically. In any case, the higgledy piggledy nature of the plots is not conducive to a commentated tour. Have a look for yourself by copying and pasting the following coordinates into Google Earth; 22° 30’ 18”N 114° 06’ 43”E

A bunting caught my eye as it flew into a field beside me. Could it be the sought-after red-head, I wondered? With chestnut cheeks and a matching band across the breast, it proved to be a Chestnut-eared (Grey-headed) Bunting. It’s not a great picture, but it is a lifer. 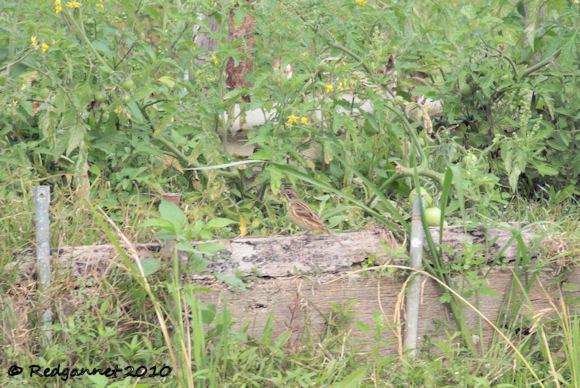 Further towards the river, the ponds became bigger and apparently deeper. I suspect that they were for fish and the herons and egrets seemed to bear this out, but a Panoramia photo has Waterflea Pond as its title, anyway, this is where the Grey Heron and Great Egrets like to hang out. 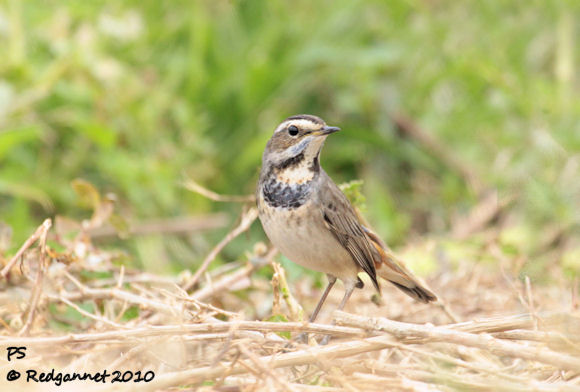 Another battery of big cameras indicated that something exciting had been found and I crept up to join the crowd waiting for a Bluethroat to reappear. A branch had been propped up and baited with mealworms which kept the bird coming back again and again to a fusillade of shutters releasing. 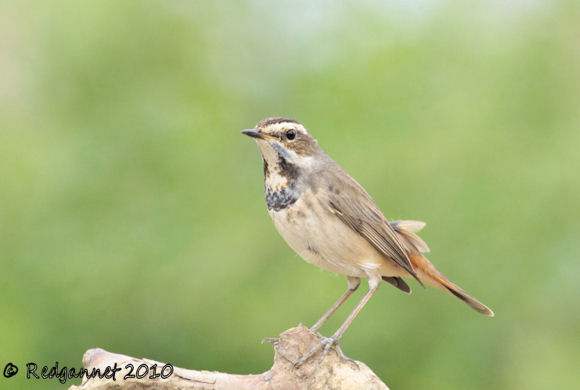 There is a blue streak in the moustacial stripe and a trace of rouge in the otherwise blank spot that makes me assume this individual to be a first winter male ssp svecica.

As the day wore on, the birds became less active. In one small patch of taro (?), I spotted about 15 Common Snipe resting and clumsily flushed a further dozen or so more. 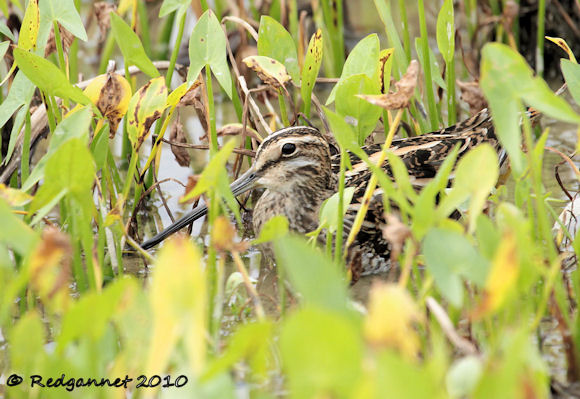 White Wagtails and the eastern, taivana, race of Yellow Wagtails also known as Green-backed Wagtail were active all day, common and conspicuous throughout the allotments. Pipits could be seen if they moved and I stayed still, otherwise, they were too well camouflaged against the earth. One flew over. Bigger than the red-throats, I am going to stick my neck out and put down Richard’s Pipit. 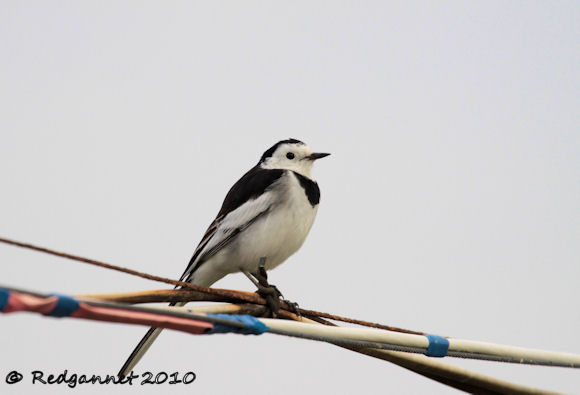 There is no shade or facilities at Long Valley/Yin Kong aside from the public lavatories. Bus 76K from Sheung Shui Station stops about 400m short of the turn off for Yin Kong (about 2kms along Castle Peak Rd). Continue under the footbridge and Yin Kong is signposted to the right. Walk another 400 (ish)m down a most unlikely looking road to the lavatories and find the allotments behind.


Sheung Shui is on the East Line. Buses 102 and 106 leave from just outside the World Trade Centre on Hong Kong Island (starting just after 06.00. For a really early start try the 24 hour bus N122 which runs every 15 mins from the first bus stop on Hennessey Road, opposite Sogo). They run through the tunnel to Hung Hom Station and a chap could be on an East Line (formerly known as the KCR, Kowloon Canton Railway) train heading to China in moments. Using the subway system would involve 3 changes of train to achieve the same result. Returning to the island, the buses run from the first stair off the footbridge out of Hung Hom Station.

The land is worked intensively with womanpower being the most apparent driving force. The rows of plants and fertilizer were so straight that I suspect some kind of apparatus was used, but no mechanical aids were seen. I was trying to get a candid picture of this lady working her watercress patch. It might have made a nice picture of traditional working practices if she hadn’t kept stopping to answer her phone. 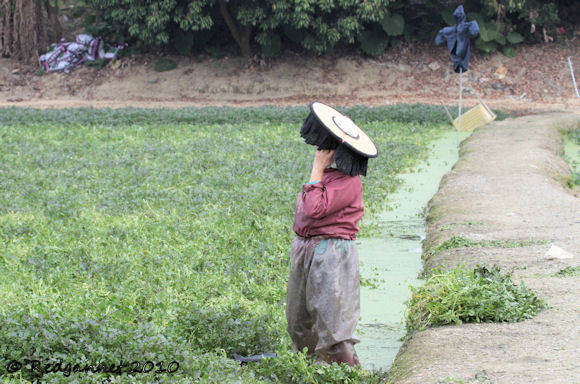 I must give great credit to the workers who happily laughed and pointed as twitchers tramped through their crops looking for the bunting. They were very patient and accepting with seemingly no qualms about the presence of the birders. While obviously trying to protect their produce, they employed passive deterrents rather than aggressive scaring techniques.
Posted by Redgannet at 23:28