Like all forests, Tai Po Kau, in the New Territories of Hong Kong, has its moods and multiple personalities. One moment, the forest can be alive with partying birds, the next it can be as quiet as the dead. Catching the waves is the key to a good day in any forest, but Tai Po Kau has a few spots where birds are likely to be found. 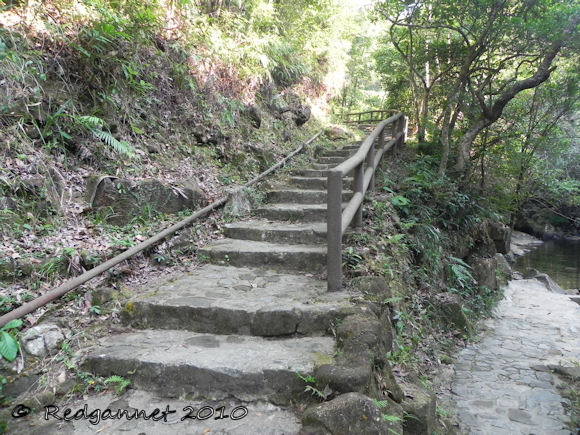 The easy way up to the Red Route

The access point to the forest is marked with a lay-by and a small commemorative garden. The casuarina trees and shrubs here are always worth checking before heading up the hill. This morning Yellow-browed Warblers and Japanese White-eyes were the first birds seen. If at any point during this post a list of two or more species is seen, please mentally note a few white-eyes and warblers with them as they were abundant and conspicuous members of each wave.

A Common Tailorbird tutted harshly at me as I looked over a piece of forest that had been thinned out beyond the stream. The first wave was passing through and I hurried up a ramp to the right to get into a good position. The party included Great (Japanese) Tit, Yellow-cheeked Tit, Rufous-capped Babbler, Silver-eared Mesia and Chestnut Bulbul. It looked as if the forest was in one of her good moods today.


I returned to the lay-by and took the more usual left hand ramp up into the forest and was dismayed to see that beyond the thinned area, a swathe on the other side of the valley had been cut for development. The steep road passes a couple of rustic residences whose open areas usually produce a few list bulking species. Today they held Grey Wagtail, Crested Bulbuls, Spotted Doves and the white-eyes and warblers. Occasionally, I thought I heard a soft “chew it” which may have been a Pallas’s Warbler (a Yellow-browed Warbler lookey likey), but I could not see one with a pale rump to confirm. 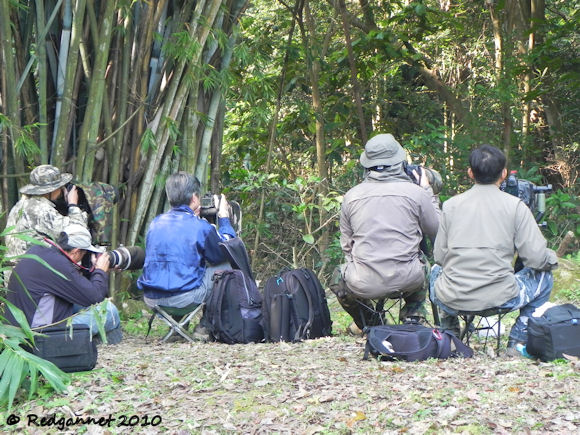 There were some big guns in the forest today. Guys wearing camouflage and carrying impressive cameras on tripods were stomping up the slope with a determined look on their faces. I had stumbled onto a Hong Kong twitch. They had set up a battery in the corner of a small clearing in the Outdoor Centre. The object of their attention sat patiently in the shadows, pumping its tail, before flitting down to a stick projecting from a pile of rocks and grabbing a meal worm that had been secured there to tempt it.

I was told that the Red-flanked Bluetail was a very rare bird in Hong Kong, although my field guide described it as being common and widespread. Another birder told me that she regularly sees bluetail during the winter. Females and immatures, in their comparatively dowdy plumage “considerably outnumber adult males” (Viney, Phillipps and Ying, Birds of Hong Kong and South China, May 1994) who sport a more colourful outfit. Perhaps it was the striking appearance of the male that had attracted such an audience, or possibly it was his boldness in coming down to the baited post and the potential to capture a really good photograph that held the appeal. 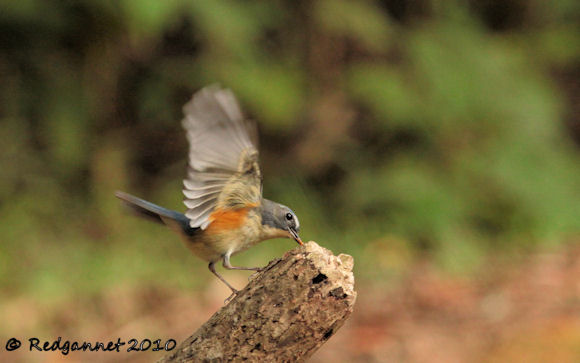 Each time the bird dropped out of the shadows to grab the worm, the clatter of shutters releasing at 6fps was like an over-enthusiastic firing squad. I inadvertantly set off a burst of fire as 12 itchy trigger fingers reacted to my firing a test shot at the target stick. More cameras continued to arrive and mobile phones were ringing in the crowd. This is not my idea of a relaxing day, so I bowed out and tried to catch a picture of a Fork-tailed Sunbird in a very attractive, red-flowered shrub. 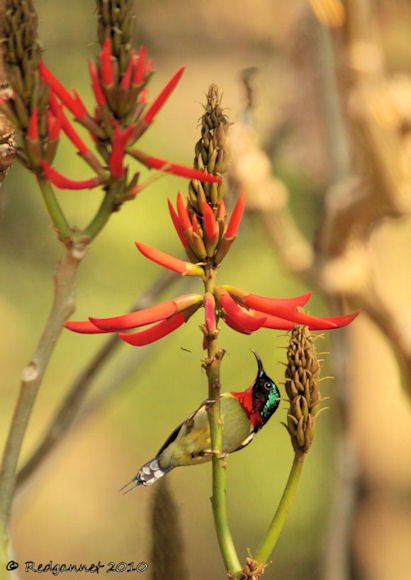 Unfortunately, a temporary toilet had been set up just beyond it and a steady stream (sorry) of birders had to pass between me and my shrub to reach it. Eventually, this bird obliged and I was able to continue birding the Outdoor Centre area. This is another reliable spot and gave up an Olive-backed Pipit, Grey-chinned and Scarlet Minivets, Velvet-fronted Nuthatch and an Oriental Magpie Robin. 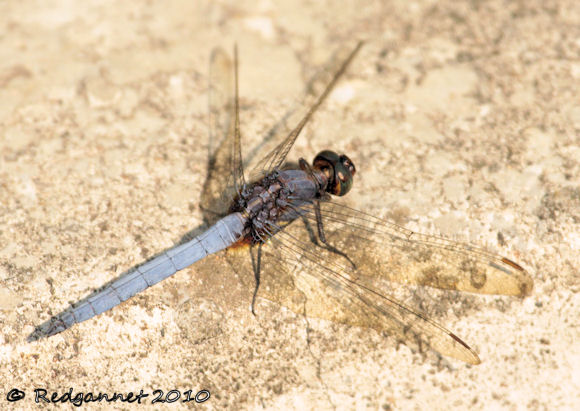 There were a couple of odonata around today which was unexpected. The temperature was just reaching into the 20s. This is winter Hong Kong style and it is a very pleasant climate to be out in the forest. The Outdoor Centre has a small pond which had attracted the Common Blue Skimmer, Orthetrum glaucum (above). Below is a Common Blue Jewel, Rhynocypha perforata which was sunning itself on a dark rock beside the stream at the bottom of the steps leading up to the Red Route. 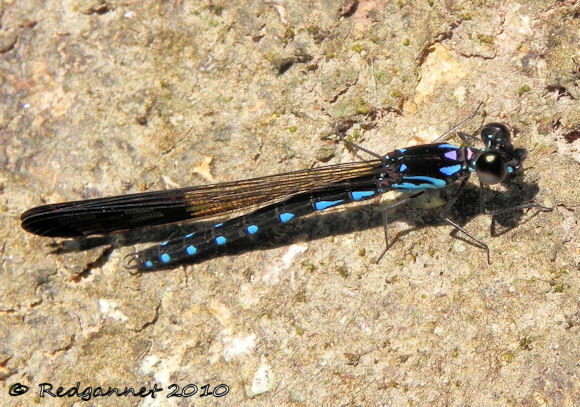 The steps are long and steep, but should not cause trouble to anyone who is young and fit. I do not include myself in either of the aforementioned categories and usually choose to take the gentler clock-wise slope and return down the stairs. Since the weather was so conducive to a bit of exertion I took the counter-clockwise option today. The day was pressing along now and although there was still quite a bit of bird activity, they were staying either high in the canopy or deep in the undergrowth and were proving difficult to find. The hours either side of midday were very quiet and I entertained myself chasing butterflies in the picnic area. 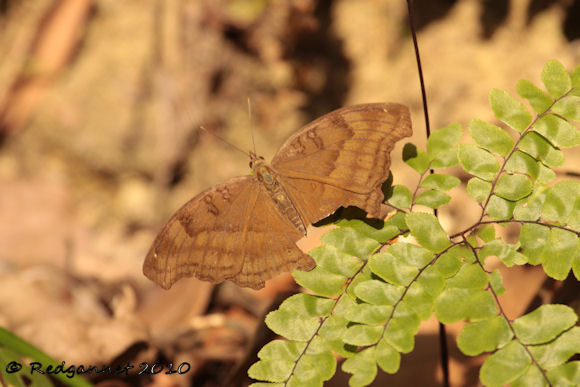 Tai Po Kau is a reforested area of about 460 hectares declared as a reserve in 1977. It is managed and maintains a good network of trails, picnic areas and an outdoor study centre. It has plenty of information boards and trail guides and maps at each major intersection. 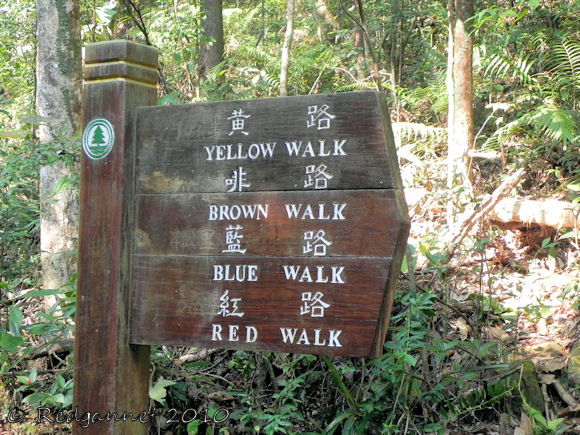 The quiet forest, tiredness and hunger eventually drove me from the reserve, but not without a last goodbye wave. The bird party crossed the road as it sloped down from the reserve. A small, pale green, crested bird, the White-bellied Yuhina is delightfully described in my field guide. It “often hangs upside-down and behaves like a tit”. This phrase strikes a chord with me as my father often used a very similar one to describe the behaviour of a much younger yours truly. Whilst my days of hanging upside-down are now well behind me, I can still be caught acting foolishly after a few Tsing Taos. 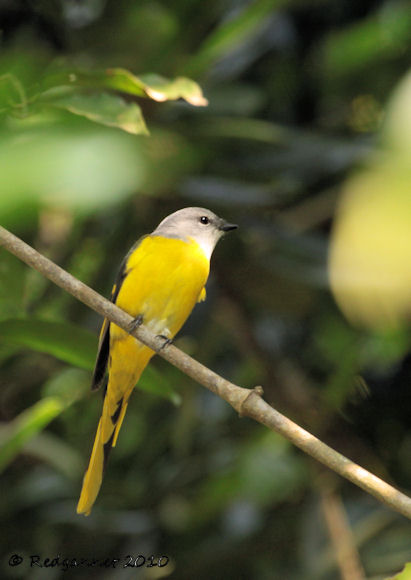 The white-eyes and warblers featured heavily again, vying to be the species with the most sightings, but most eye-catching were the Grey-chinned Minivets. Earlier sightings had been distant and backlit, but now, both male and female were close. The female was elegant in her yellow, party best, while the male sported his dashing flame-red. Both sexes show an “inverted tick” on the wing in their respective colours. The grey cheeks and throat help to separate them from the Scarlet Minivet, which has a black hood for the male and yellow cheeks and forehead for the female. 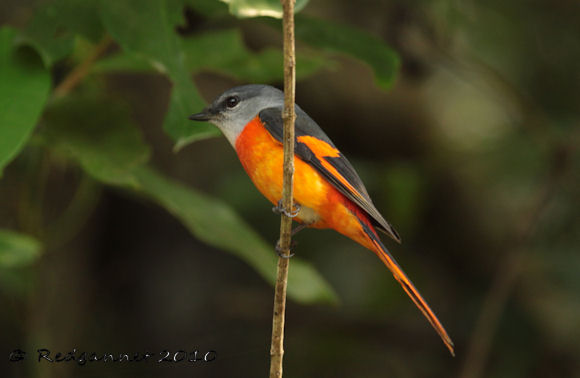 The kiosk in the lay-by, which is so often a welcome relief with its supply of cold drinks for weary birders coming out of the forest, was closed today and looked as if it may have closed down permanently. There is no other source of refreshment so visitors should bring enough water and snacks to keep themselves going. There is a temporary toilet at the Outdoor Centre, but otherwise there are no facilities. 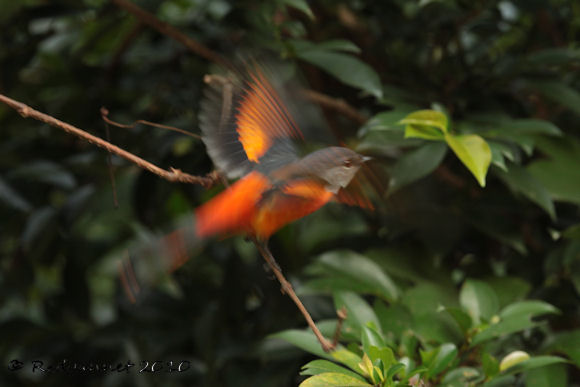 Buses 102 and 106 leave from just outside the World Trade Centre on Hong Kong Island (starting just after 06.00. For a really early start try the 24 hour bus N122 which runs every 15 mins from the first bus stop on Hennessey Road, opposite Sogo). They run through the tunnel to Hung Hom Station and a chap could be on an East Line (formerly known as the KCR, Kowloon Canton Railway) train heading to China in moments. Using the subway system would involve 3 changes of train to achieve the same result. Returning to the island, the buses run from the first stair off the footbridge out of Hung Hom Station.

Tai Po Market Station is on the East Line. Taxis are easily available from the station and cost $HK25 (@ $HK12 = £1) at the time of writing. Buses also run up the hill and stop close to the lay-by. Ask the driver for Tai Po Kau (pronounced How). There is usually a steady flow of taxis past the lay-by for return, unless it is raining.

The East Line connects to the rest of Hong Kong’s transport system at Hung Hom or Kowloon Tong.

Italicized species were seen en-route
Posted by Redgannet at 00:24