Any day that brings 3 species of kingfisher before breakfast is already a good one, but this visit to Paser Ris Park in Singapore just kept on getting better and better. 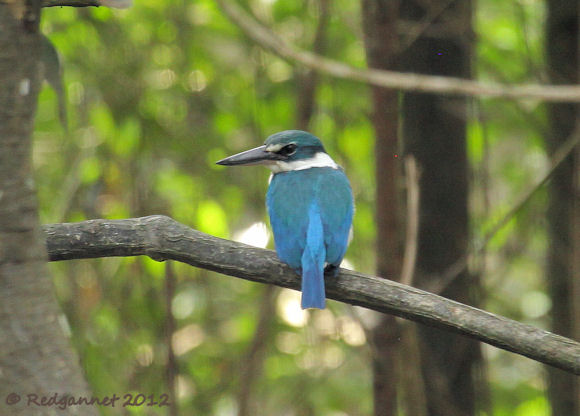 After years of missed opportunities, I remembered to get out my camera to allow it to acclimatise to the heat and humidity before I needed it. Even so, the condensation still lingered as I approached the bridge over the gutter on Sungei (River)Tampines (Google Earth ref; 01 22 36.20N 103 57 10.01E). Normally this would result in a ruined picture, but this morning was one of those rare, blessed days when everything was going right and the mistiness actually enhanced the photo a little don't you think? 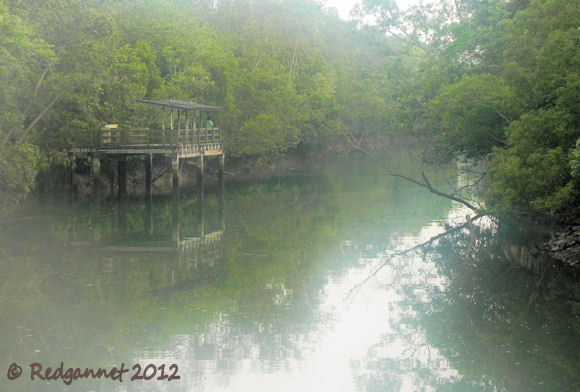 Just beyond the platform a brown body was ‘porpoising’ through the water. Monitor lizards usually adopt a more serene, serpentine style. This swimmer was frenetic and there were three of them. 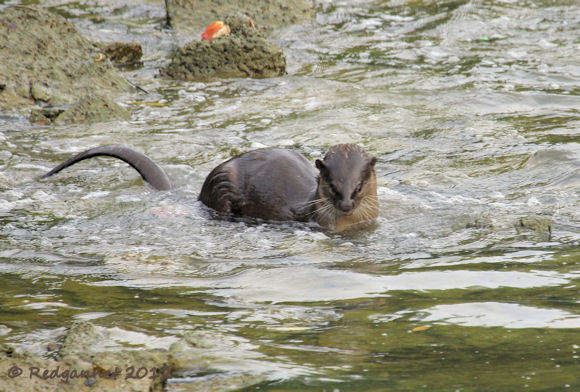 Otters!  Smooth Otters have only recently started to be seen regularly in Singapore, but can easily travel across the Straits of Johor from Malaysia. They continued upstream towards me, chasing each other, frolicking and playing until they ended up almost beneath my feet. 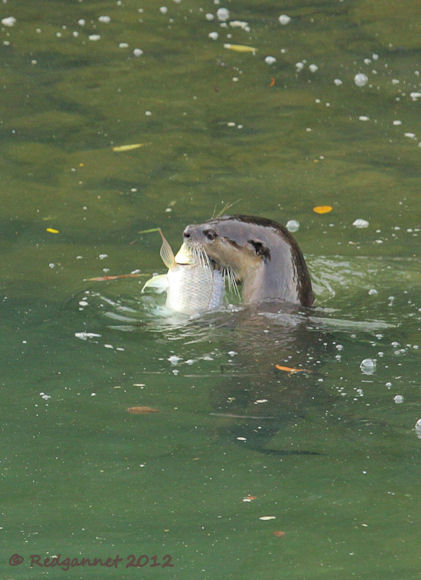 They scampered in and out of the water, revealing the true intent of their playfulness. One caught a fish and a squabble ensued when a second approached and snatched the fish away. Another fish was caught and the group settled down to feed. 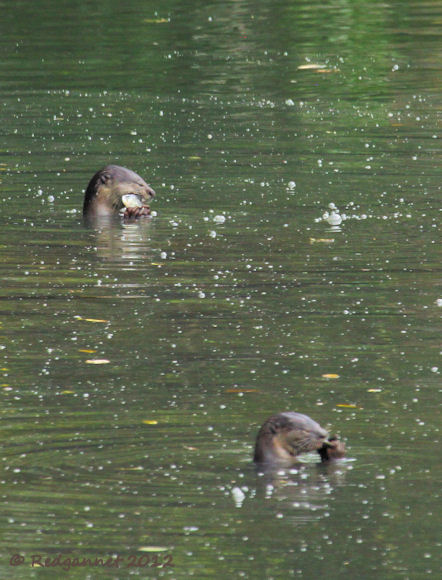 Stillness returned to the river as they slipped away downstream leaving half of the fish uneaten and the Common Kingfisher returned to his post to target smaller prey. 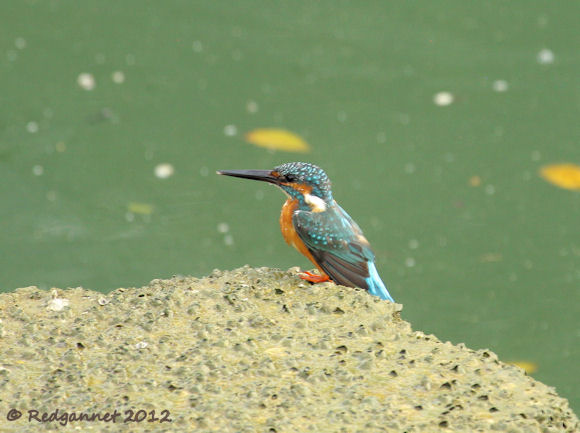 Back in the world of the birds, Black-naped Orioles, Asian Glossy Starlings and Pink-necked Green Pigeons seemed sedentary and mundane by comparison. But this was to be a great day and news reached me at the top of the viewing tower that a Mangrove Pitta had recently been seen in the park and may still be found along the boardwalk. A Mangrove Pitta, any pitta in fact, would be a family tick and a good scratch for an itch that I have never managed to reach. 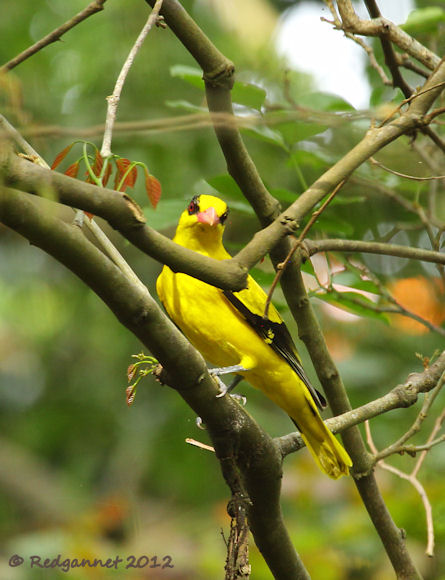 Along the un-railed part of the wooden walkway, where the tide only reaches at its highest of highs, a couple of Singaporean cameras were set up in the hope that the pitta might show today. They very kindly pointed out the areas where it might make an appearance, but added that it was mostly seen early in the morning or later in the afternoon. I was in no hurry today and was able to afford the luxury of stopping with them for a while. As we waited, the chat turned to a Spotted Wood Owl that lived in the park. It had two chicks which were out of the nest now and were usually to be found beyond the close by herb garden. 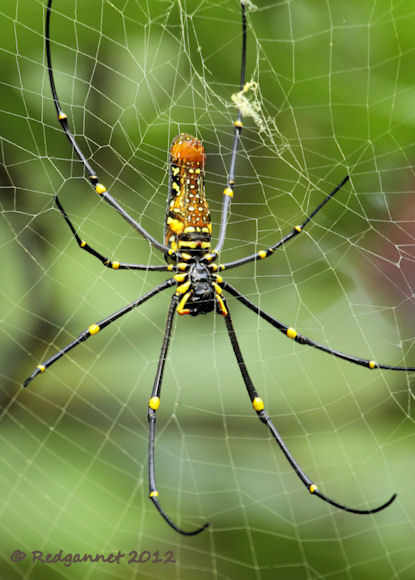 The pitta seemed reluctant to show as the morning warmed up, so I took some directions and headed out towards the herb garden. As I searched through the trees on the beach side of the plot, Asian Brown Flycatcher, Sunda Woodpecker, and an overflying White-bellied Sea-eagle were seen. Another birder in the park noticed me looking blankly up and turned me round to point out a large dark mass in the shade at the top of one of the thinly leaved trees. This was the adult Spotted Wood Owl, but we were unable to locate the youngsters. A couple of other birders had found a good vantage point and brought news that the pitta had been seen again. 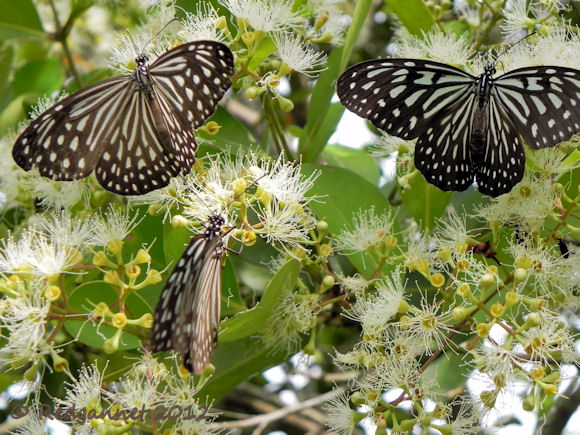 I hastened back to the boardwalk and found that the other birders had moved along, obviously satisfied.  I carefully stalked up and down the walkway in the hope that it might still be showing, but to no avail. Cursing my luck, I was about to move on when something caught my eye. It shouldn’t have, as it was motionless and not obviously different to its surroundings, but a quick look through the binoculars into a tangle of low branches and high roots brought my first ever sighting of a Mangrove Pitta. 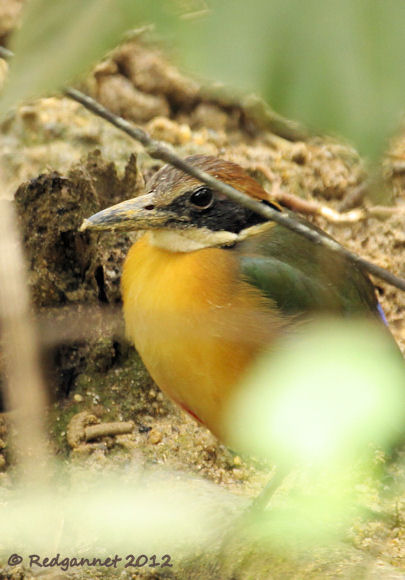 I habitually use red to note the first sighting of a species, but I think that there should be something even more dramatic to register the first member of a family. So much for the contention that pittas are more easily seen early in the morning or later in the afternoon, this was now 10 minutes to midday. It was crouched, unmoving, on the ground beneath the tangle of branches and roots. A small gap just allowed me to get a picture, though nothing like the shots that the other birders had managed earlier. 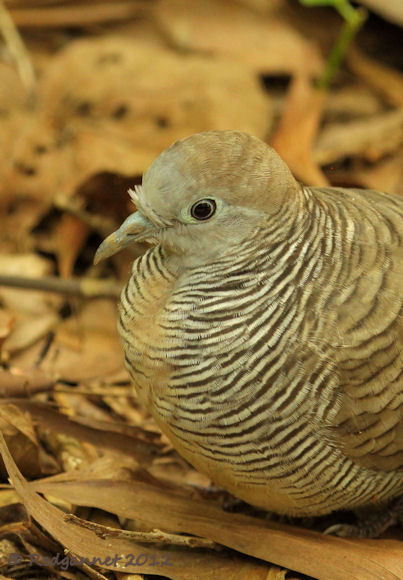 The day was becoming increasingly hot, humid and oppressive.  Zebra Doves fed quietly in the dry areas of shade. I decided to move on thinking that the day had surely given everything that it had to offer, when the tiniest movement caught my eye. 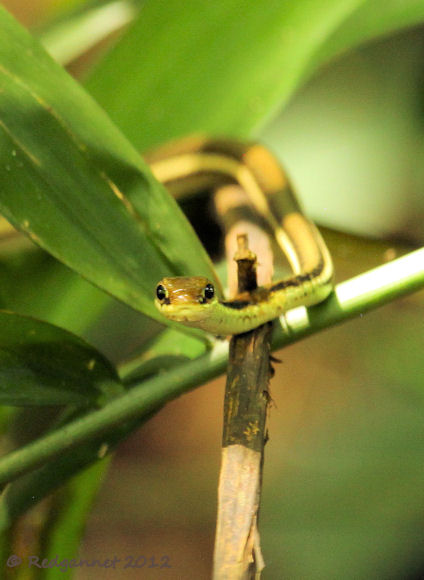 A tiny snake slithered back into the fronds of a low, shaded palm but paused for a moment to look back and top off a most remarkable morning.

If anyone out there can suggest a name for the snake, spider and butterflies, I would be thrilled.
Thanks.
Posted by Redgannet at 10:37