Sungei Buloh is Singapore’s premier dedicated nature reserve and wetland. It is ironic that the bus from Kranji MRT Station continues on to the reserve only at weekends, but on this Sunday morning, I chose to alight a mile short where the bus normally turns round and heads back. 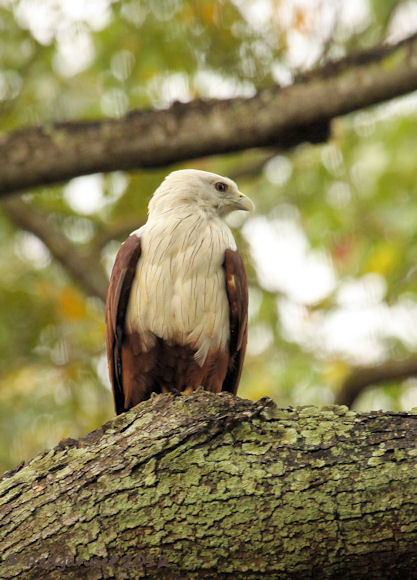 The Singaporean chapter of the Big Lens Club were pointing their tackle at a tree in Kranji Beach Battlefield Park (Gogle Earth ref; 01 26 20N 103 44 15E). I pressed the button and jumped from the bus to see what they had found. It was a Brahminy Kite, posing as if it had nothing better to do with the day. 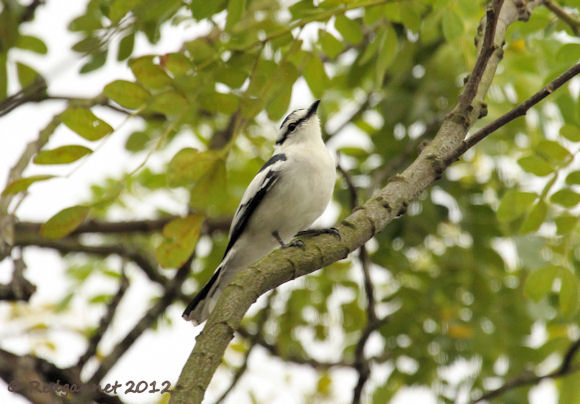 Rather than walk the remaining mile on a morning that was already oppressively hot, I wasted some time until the bus passed again by watching a Pied Triller in the car park. Also seen here were Collared Kingfisher, Striated Heron, Common Sandpiper and Asian Glossy Starling. 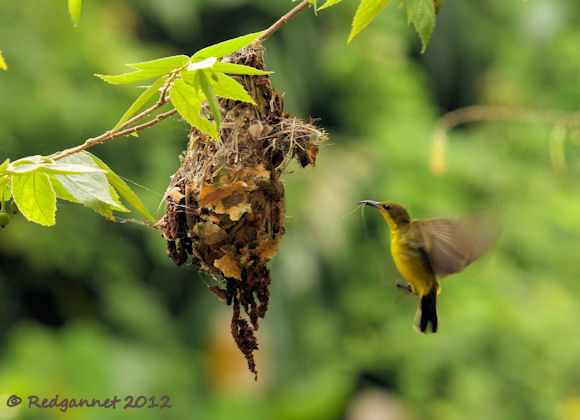 At the entrance to the visitor centre (Google Earth ref; 01 26 42N 103 43 48), more cameras were arranged as a battery pointing at an Olive-backed Sunbirds’ nest. The pair had been building for a couple of weeks at this point and they were just adding the final touches before the female began laying. 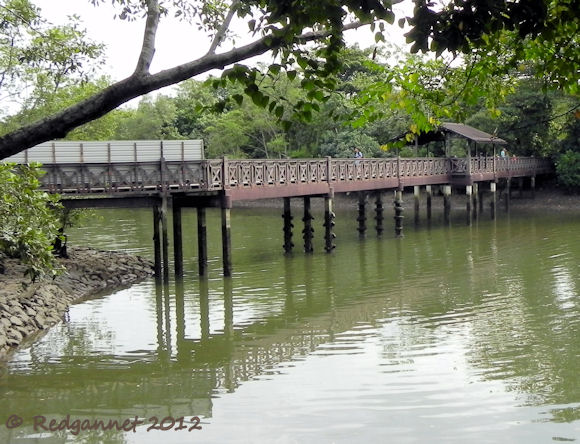 The tide was low as I crossed the bridge into the reserve. A tide of 3.2 meters was expected at 15.00, but I cannot say how that compares to average high tides.  More than two dozen viewing hides, screens and towers circle the managed mangrove wetland and the freshwater ponds. 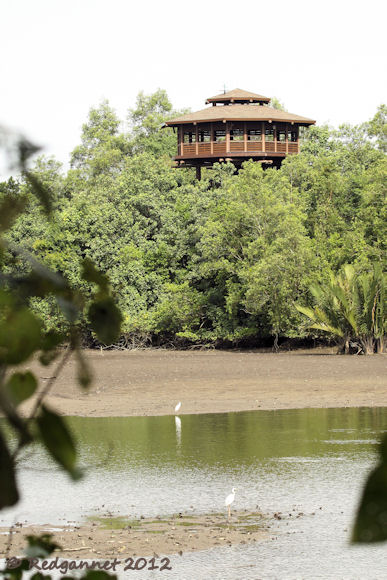 My intention to head for the freshwater area beyond the mangrove boardwalk was thwarted, as usual, by my weakness for distraction. A crocodile was basking on a sand bar and a large monitor lizard kept its distance as it passed. 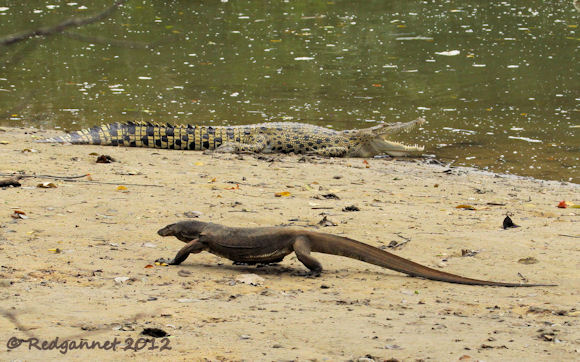 At hide 2D, Little Egrets, a Great Egret, Lesser Sand Plovers, and a couple of Marsh Sandpipers were all outnumbered by Common Redshank. I had intended to leave the waders until the tide pushed more of them into the reserve, but they were such a pleasure to watch and the hide was comfortable and cool. A narrow rivulet runs just in front of the hide and gave the redshank somewhere to bathe. 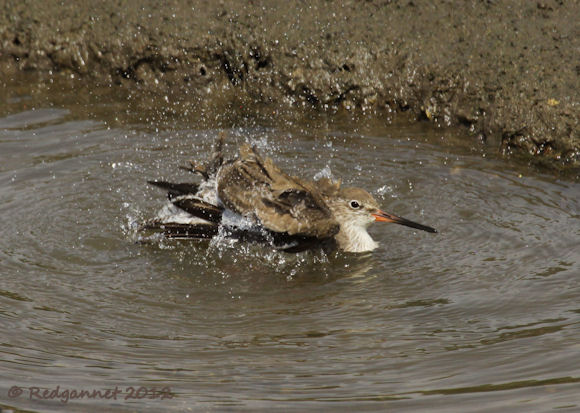 The sun had climbed high now and the heat and humidity was sapping. By the time I reached the freshwater area most sentient life had crawled off to sleep in the shade and nothing was moving there except for some mad dogs, this Englishman and a daft Blue-tailed Bee-eater. Pink-necked Green Pigeons were common, feeding in fruiting trees near the boardwalk. 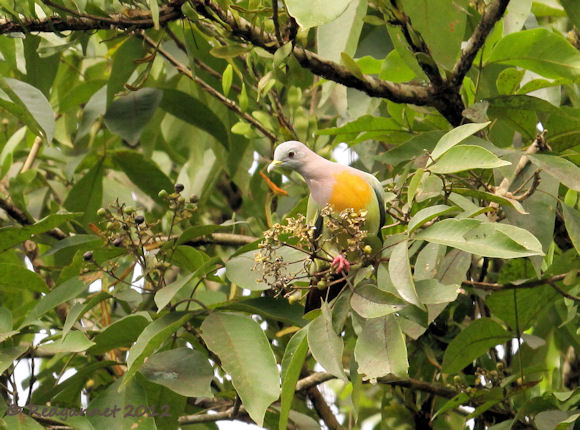 The tide eventually pushed the birds off the mud and beaches along the Straits of Johor and up into the reserve. A large flock of Whimbrel joined Common Greenshank and Pacific Golden Plover in the managed areas. A Milky Stork that is often seen at the reserve is said to be an escapee, but sometimes more than one is seen. On this occasion a singleton must be assumed to be the fugitive and will not count towards the year list (unless things get tight towards the end). 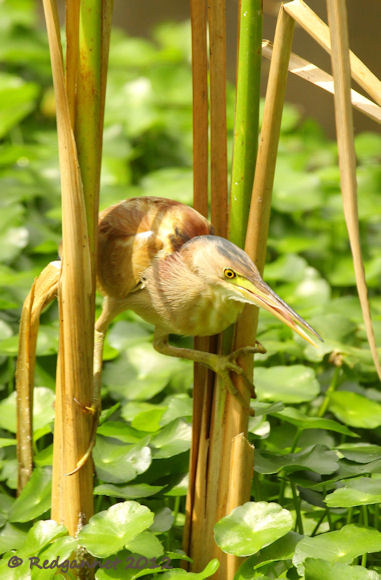 The best sighting of the day was a Yellow Bittern which put on a show at the freshwater pond back at the visitor centre by the entrance. It suspended itself between two reeds as it watched for prey in the weeds and water beneath. 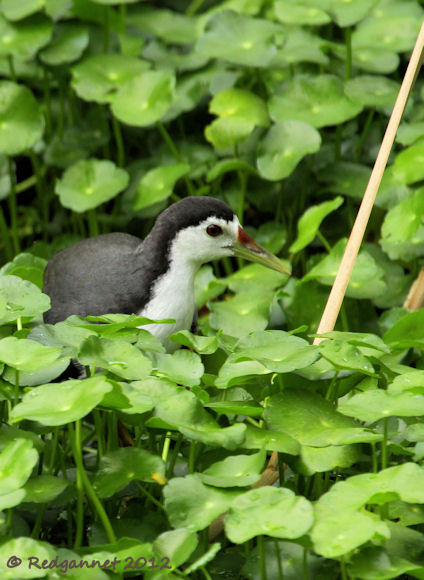 As I watched the bittern a movement in the weeds provoked some excitement and I readied myself for a crake or somesuch to emerge. The movement was caused by the most abundant of Singapore's Rallids however, a White-breasted Waterhen.