It was Valentine’s Day and I had a date. Please don’t tell the memsahib! I didn’t bring flowers or chocolates to my rendezvous, but I don’t think my date minded, after all we were headed out to the dunes by the cape. We had met up at Doug’s home in Brooklyn and although he did look very attractive this morning there was only one object for my affections today: We were going to Breezy Point to have another go at finding my life Snowy Owl. 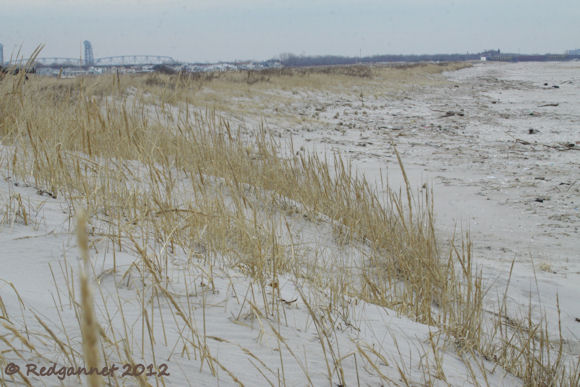 Doug was obviously very confident that he would be able to find the owl and stopped along the way to have a look in at Floyd Bennett Field. The disused airfield overlooks the west side of Jamaica Bay and the water was as smooth as glass. In the foreground Brant Geese, Ring-billed Gulls and Herring Gulls roosted on the shore. A flock of Canada Geese flew straight at us across the inlet. 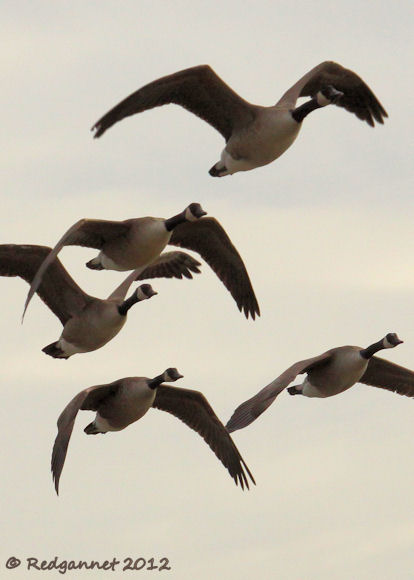 The flat water was perfect for scoping and Doug soon picked out a couple of Red-necked Grebes from the Horned Grebes and separated a Barrow’s Goldeneye from a small flock of Common Goldeneye. There were many Red-throated Loons and more Red-breasted Mergansers than I ever recall seeing in one place before. 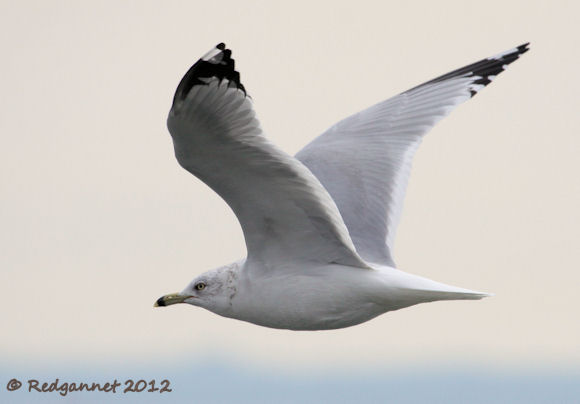 Even more loons and mergansers were seen at Fort Tilden as Doug teased me by delaying the climax that would surely come once we reached Breezy Point. Even then he prolonged the exquisite pleasure of anticipation by taking me the long way round.
Fort Tilden Birds seen;
Red-throated Diver 35, Great Northern Diver 6, Long-tailed Duck 60, Bufflehead 35, Red-breasted Merganser 70.
From the parking lot at Google Earth ref; 40 33 22N 73 55 54W we walked to the beach that runs around the north and west of Breezy Point. The water was still very smooth and Doug scoped some Razorbills and even more loons and mergansers. 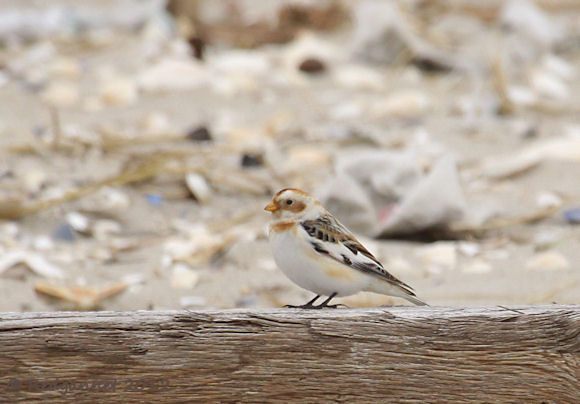 A Snow Bunting settled on a railway sleeper that had been washed up and at last I managed to get a recognisable picture of this bird. Greater Black-backed Gulls waited near the waterline and Doug pointed out a Glaucous Gull behind the heaped sand of the shore. Sanderling hardly bothered to run back and forth as the tiniest ripples from the glassy bay lapped the beach. Inshore the dunes rose gently, covered sparsely with coarse grasses and an occasional short, scrubby bush. Doug finally cut up from the beach to the dunes and about 100meters in was a large white bird, unmistakeable even from that distance as a Snowy Owl. 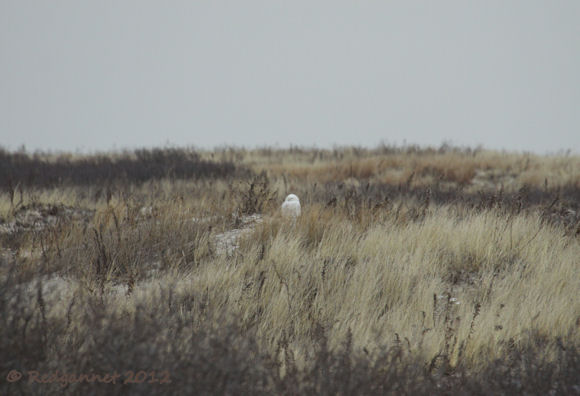 This beautiful bird was entirely white which brought about some discussion about the occurrence of this plumage type. I was of the impression that the pure white individuals were adult males and that most of the irruptive birds were juveniles with dark barring on their plumage. 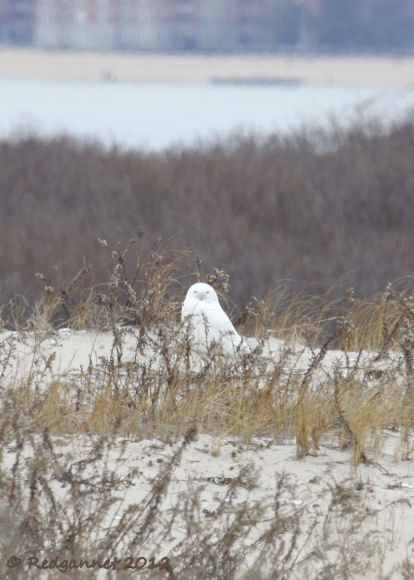 Doug had heard of research suggesting that chicks become progressively lighter, the later they occur in a clutch. Since the lemmings had been so plentiful this year on the owls’ breeding grounds of the far north, many of the later, whiter chicks survived and this individual may be one of those. 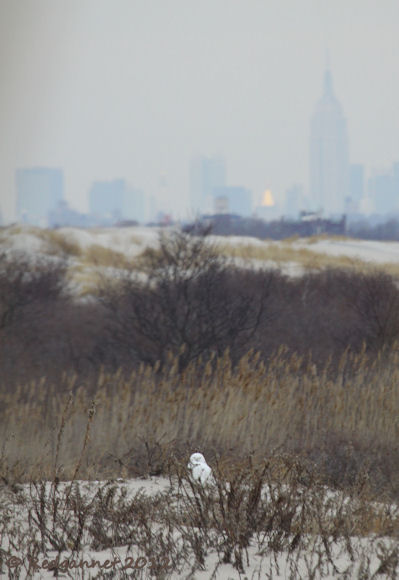 It was at this point that I began regretting my lack of expertise at digiscoping. The owl was well placed for a picture, just a little bit far away. Our best attempts didn’t come up to over-hopeful expectation, but then Doug led me around the point to get a look from another direction. The owl was closer from this angle and it was even possible to get the Empire State Building in the distance behind. Even so, I was cursing myself for not getting a better grip of distance photography before finding such a perfect subject. 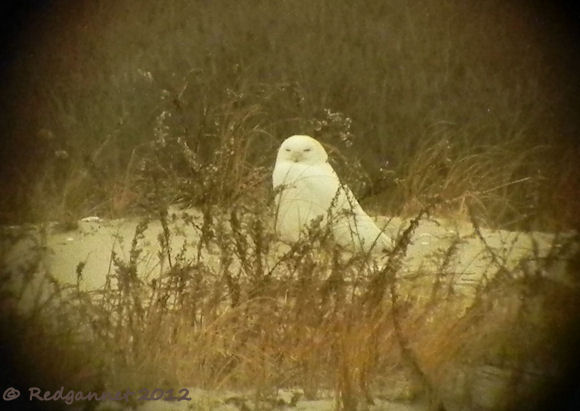 A steady stream of birds passed the jetty at the extreme south-western tip of Breezy Point. Doug continued doing all the spade work, counting as many as 625 Long-tailed Ducks while I mucked about with the owl and a flock of Sanderling roosting close to the water’s edge. The wavelets seeping onto the sand were minute and most of the flock managed to ignore them. Some however were unable to resist the primal urge to run ahead of the ripples, disturbing their resting flockmates as they went. 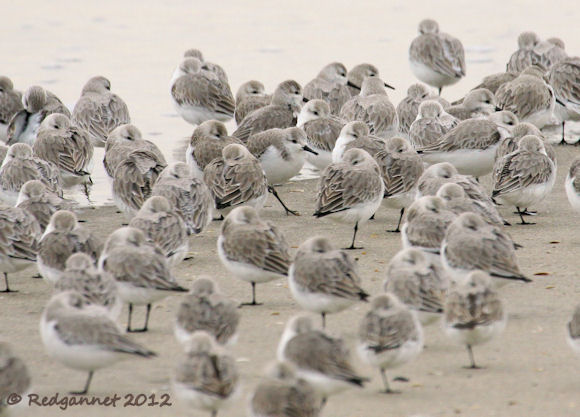 Doug suggested that I might like to see the Brooklyn Scaup flock. I must confess out of Doug’s hearing that I didn’t think a flock of Greater Scaup warranted a special stop, but that was until I saw the thousands of ducks tightly packed together by the marina at Dead Horse Bay. 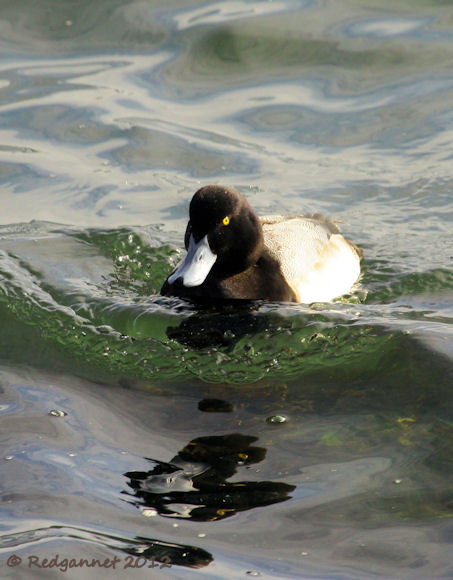 By its own standards, the flock was comparatively small today. Our estimates were wildly different and I am choosing to go with Doug’s count as he is far more familiar with flocks of this size than I am. His estimate of 12,000 birds was way short of the flock’s potential at 30,000 plus.
Dead Horse Bay Marina, Birds seen; 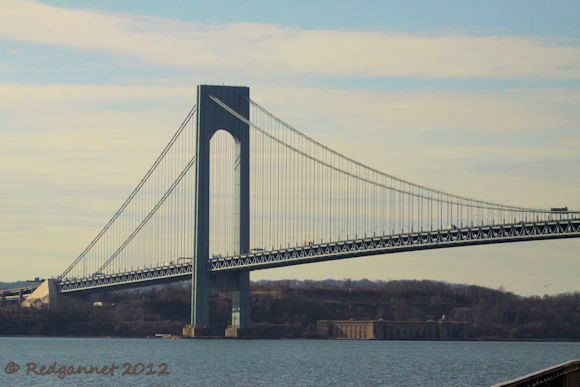 We had elected to miss out on Jamaica Bay Wildlife Refuge today in favour of a chance to find Purple Sandpiper overlooking Gravesend Bay. Seldom does a life bird come so easily as peering over the edge of a railing and finding one at your feet. 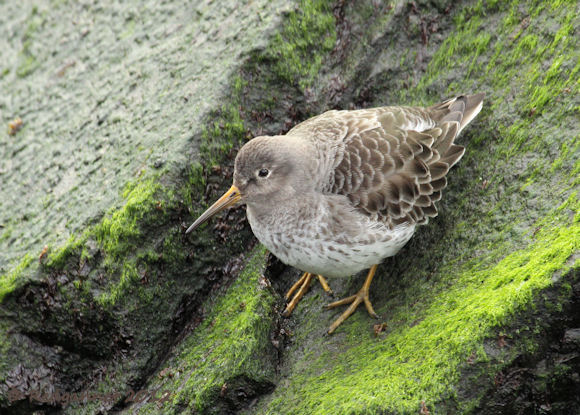 Up to a dozen Purple Sandpipers were working the rocks along a 100meter stretch of seawall looking out across the bay to Staten Island with the Verrazano Bridge to our right. They were accommodating too, posing for pictures and allowing us a close and personal view as they fed from the wet rocks. 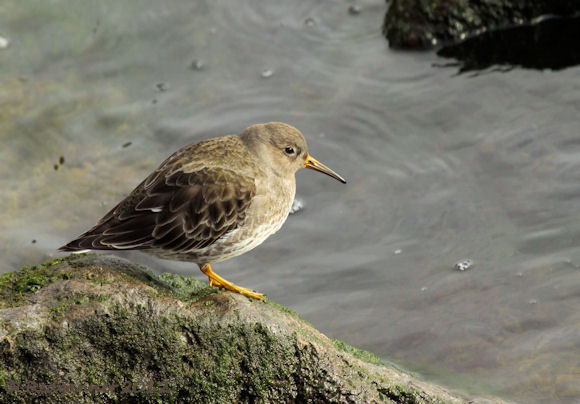 Doug, you were great company and a wonderful guide. You found three lifers for me today and the Snowy Owl will always remain a treasured memory. Thank you so much and happy Valentine’s Day!