It was the Saturday after Thanksgiving and the mist lay heavily on the ponds, subduing the early morning light as we arrived. 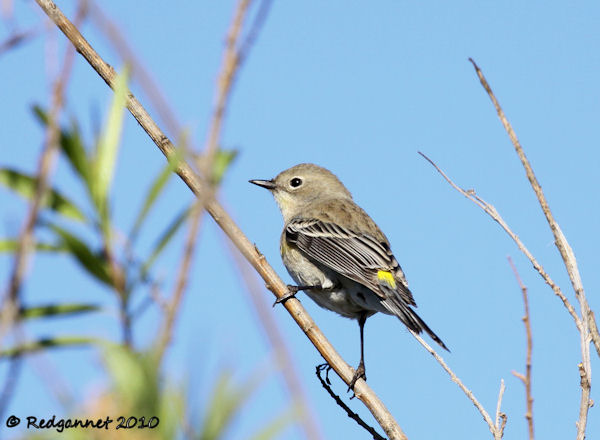 Jerry Millet had generously given up precious time with his family and his in-laws who were staying for the holidays, to take me birding in Orange County, south of Los Angeles. Note that I do not write this with keyboard in cheek as he genuinely is lucky enough to enjoy spending time with his extended family. He is not a birder and my competence has been called into question as often as I have served hot dinners, but between us we managed to wrestle nearly 60 marks onto a checklist that we had gleaned from Sea and Sage Audubon House, the visitors’ centre for San Joaquin Wildlife Sanctuary. While gleaning, I wish that we had picked up a map as we later found that we had barely covered a third of the sanctuary and had missed out on a boardwalk, open areas and an urban forest.


The section that we did cover, in the south-east corner of the reserve, included the square ponds, known evocatively as Ponds A, B, C, D and E and the larger, non-uniform lakes charmingly named Ponds 1 and 2. The catchy titles are possibly a throwback to their association with the on-site water treatment facility. Once beyond the bodies of water, track names such as Willow Path, Shady Lane and Lost Trail leave a sweeter taste in the mouth.
The Fledgling Trail starts at Pond E. Coincidentally, so did we as it was right beside the car park. Cedar Waxwings were up early and feeding in berry trees by the path. On the square, shallow pond, the mist had cleared quickly and waders and ducks awaited our inspection. Black-necked Stilts were numerous with a single American Avocet towards the edge of the flock. 2 Spotted Sandpipers bobbed along the edge. The dowitchers and a number of peeps on the far shore were put aside for a while until we had scanned the water. This photo of a Kildeer was taken at the end of our walk when the sun had cleared the dyke that casts an early morning shadow. 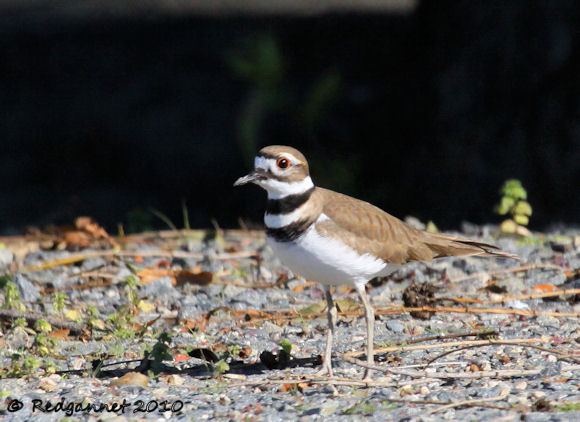 A good selection of duck was headed up by Northern Shoveler and Green-winged Teal with smaller numbers of Gadwall, Mallard, and Blue-winged and Cinnamon Teal.
In a moment of excitement a hawk dashed across the pond. It came in low and fast, intent on a kill. A couple of stilts were slow to react and froze in the water, but the hawk mistimed its change of direction and lost speed in the bank, allowing the stilts to escape.
The predator was very small, certainly small enough to make me think that it might be a Sharp-shinned Hawk, but such a suggestion drew sharp intakes of breath from local birders, so we reserved our judgement until photographs could be properly examined and reveal the tell-tale tail, rounded at the end in the manner of a Cooper’s Hawk. Close inspection at high magnification also revealed a slightly pale nape which is again suggestive of Cooper’s. 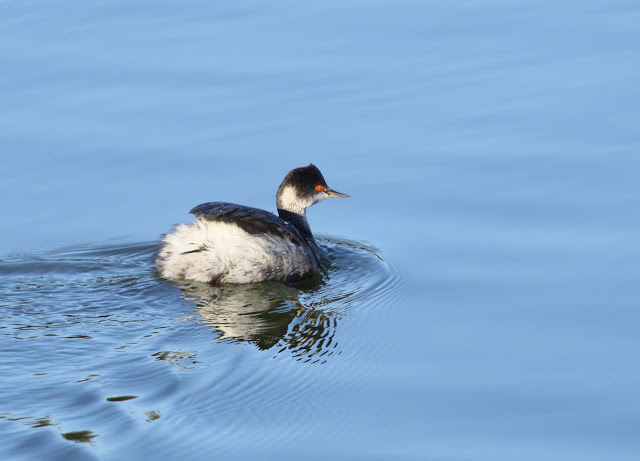 Pond C must have been deeper. Eared Grebes and a female Bufflehead were diving amongst a flotilla of shovelers that had crammed themselves into a tightly packed wheel, rotating around a central axis. In between the planes taking off from nearby John Wayne Airport, it was quiet enough to hear the shmacky, shplatty noises of dozens of shovelers feeding together. 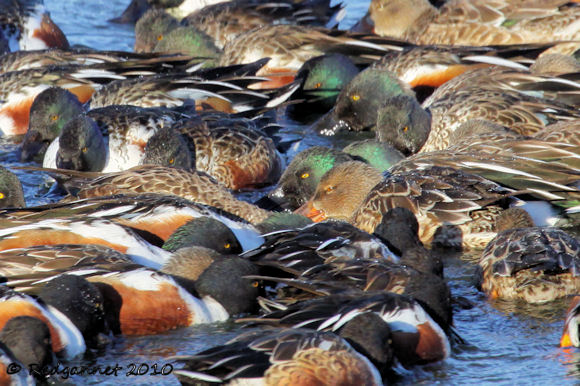 The margins of Ponds A, B, 1 and 2 are lined with tule rushes. Common Yellowthroats and Marsh Wrens called these home, while Blue-grey Gnatcatchers, Bushtits and Yellow-rumped Warblers enjoyed the scrubby bushes along the banks. 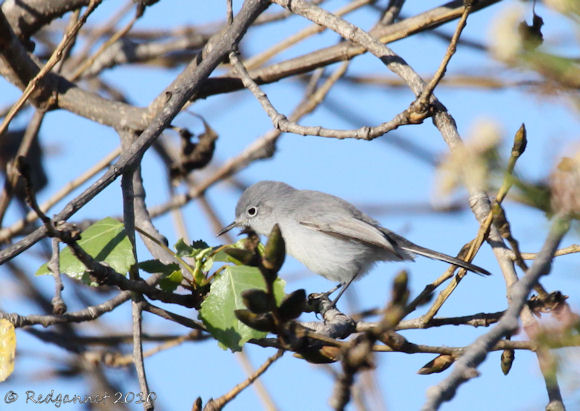 The 6 numbered ponds are much larger than the lettered ones and give the heavier birds such as American White Pelicans enough room for a run-up to get airborne. A flock of about 50 took off directly over our heads as we passed Pond 1. 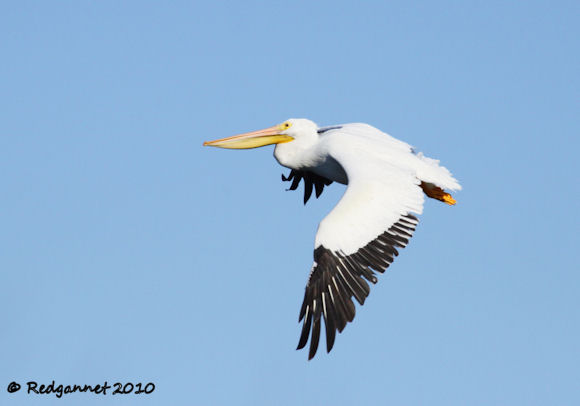 Forster’s Terns plunged into the water behind us as we checked up on a small flock of Tree Swallows.
A triangular junction between Ponds 1, 2 and 3, might be dubbed ‘Flycatcher Corner’. Cassin’s Kingbird, and Black and Say’s Phoebes were taking it in turns to hawk from a well positioned snag here.

We found the pelicans again in Pond 2, crowded onto an island that they were sharing with Double-crested Cormorants, Great and Snowy Egrets, Great Blue Heron and some mixed ducks and waders.

We rounded this lake and began the last leg of our distorted circle approaching the visitors’ centre along the South Loop Trail, parallel to San Diego Creek. A Northern Mockingbird was keen to have its photograph taken, posing nicely as we both enjoyed its approachability. A small flock of exotic Nutmeg Manikin were less accommodating and stayed out of reach of our cameras. 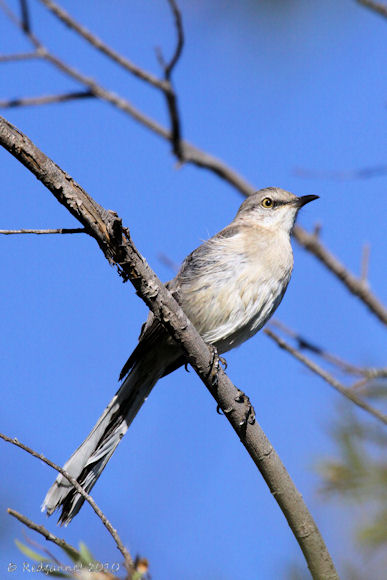 As we closed the circle, Jerry spotted an Osprey flying over Pond 1. We watched as it was escorted past a distant building by a Peregrine Falcon.
Audobon House (Google Earth ref; 33⁰ 39’ 39”N 117⁰ 50’ 28”W ) is a charming visitors’ centre with as many US-centric bird books as I have ever seen outside of the Open Air Books and Maps shop in Toronto. There are rest rooms in the adjacent car park which is accessed from Riparian Way which runs beside San Diego Creek. Entry to the sanctuary is free and it is open from dawn ‘til dusk. Maps and checklists are available from dispensers for early arrivals. The checklist recognises 263 species, but is in the process of updating.
Bobcats are sometimes seen on the reserve and kittens have been recorded over the last few years. Reports of Mountain Lions are likely to have been a combination of Bobcats and a distorted sense of distance.
I wish that we had found the map dispenser earlier and used it to do justice to this delightful reserve. I would like to thank Jerry for his company and generosity and for seeking the suggestions of Steve Shinn who recommended San Joaquin Wildlife Sanctuary.
Bird species; 59