Now, correct me if I am wrong (after my previous posts, I know with some confidence that you will), but does the sun not rise in the east and set in the west? Isn’t this one of the constants in the bedrock of assumed wisdom?

So why then, when I am standing on the coast of California, did I see the sun coming up out of the Pacific Ocean? 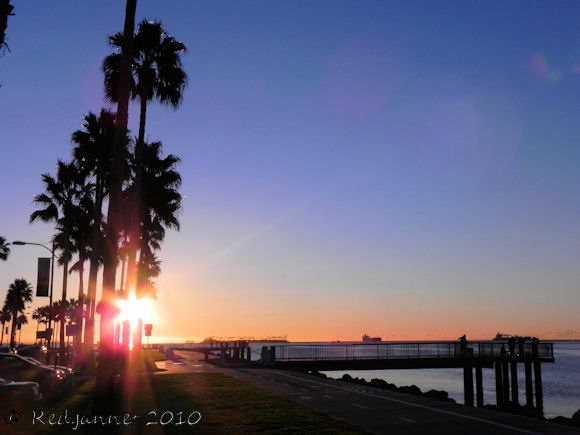 I had assumed that by being on the west coast of North America, I would be looking out across the water in a westerly direction, with the sun rising behind me in the east. This would have provided me with perfect conditions to sea-watch from Long Beach’s harbour wall, but instead I found myself looking straight into the sun and being blinded to any potential birds on the calm waters in front of me.
Of course the old rising sun adage only holds true for 2 days each year, at the equinoxes. For the other 360+ days, the sun’s rising point strays a little to the south during the northern winter and back to the north for the summer. Its furthest wanderings (to the tropic lines at 23.5° either side of the equator) are marked by the solstices in June and December, but the degree will vary slightly depending on the observer’s latitude. If you ever wondered what druids do at Stonehenge, they are celebrating Wiltshire’s most northerly sunrise point on June 21st (research suggesting that the site was originally built to observe the winter solstice (summer sunrise being diametrically opposite winter sunset means that the stones can be used for either purpose) is conveniently ignored by those who don’t want to get frost-bitten in a frock on a cold morning in late December).

And another thing; I had forgotten that the coastline at Long Beach was not strictly north to south. In fact, it is east to west and the marine path veers round to point almost north-east. So the water is to the south and I had arrived during the season when the sun was rising south of east and therefore appearing to come up out of the Pacific Ocean. Well, I am glad that’s settled. 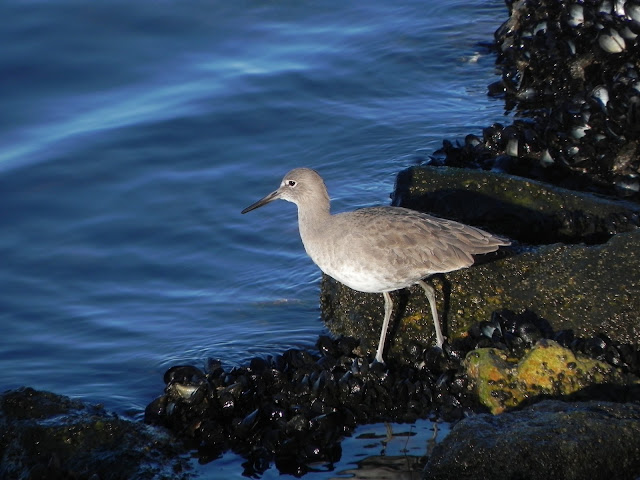 I solved my dilemma by walking as far out along the harbour wall as I could, then began birdwatching on the return journey. On the rocks of the harbour wall a Black Turnstone stood quietly while Willets were taking advantage of the mussels revealed as the tide flowed out. Across the mouth of the LA River, Pelicans were plunge-feeding in front of the Queen Mary. Forster’s terns were feeding too, a little closer.
A noisy group of Western Gulls chased an Osprey which had a fish grasped tightly and arranged aerodynamically, facing the line of flight. 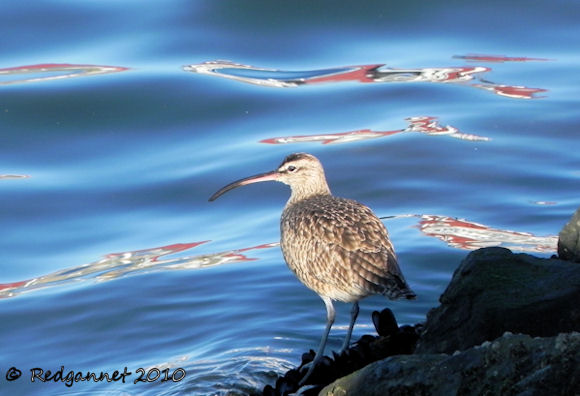 A Whimbrel, flushed by one of the many feral cats that live in the rocks, alighted just in front of me. These pictures are taken with my Nikon P100 today after the DSLR failed again yesterday. 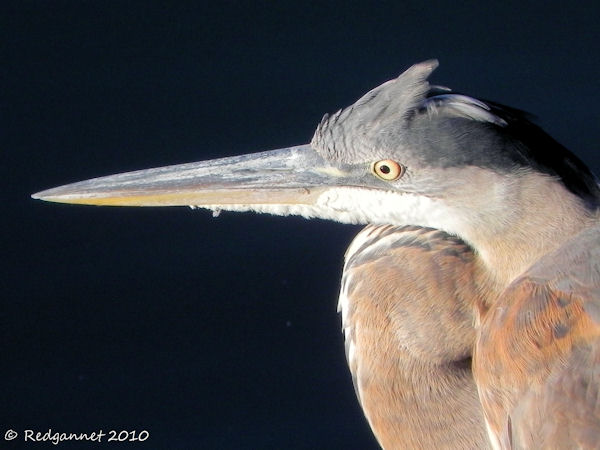 It took rather a fetching picture of a Great Blue Heron without much input from me. The background should have been dirty water, but I rather like the way that the camera decided to up the contrast and go for black.

I followed the path around noting Western Grebes, Surf Scoters and BufflEheads on the river mouth. In the harbour amongst the boats were some Heerman’s Gulls, American Coots, and a Belted Kingfisher which sat watchfully at the prow of a boat. 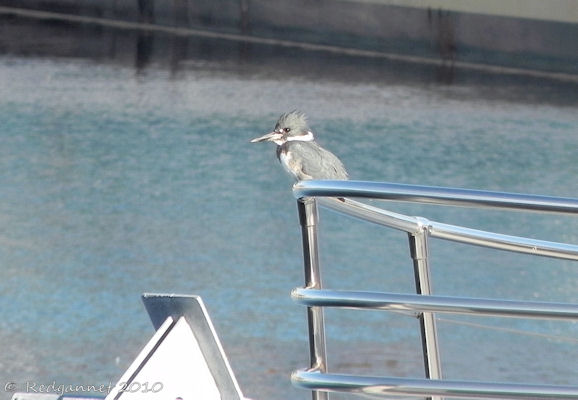