A walk in New York’s Central Park always carries my hopes for a long list of New World Warblers, but my luck and skill could not combine to bring these hopes to reality today. It was a glorious day to be out in the park however and was enhanced by a great look at a young Red-tailed Hawk and chance meetings with other like-minded wanderers. 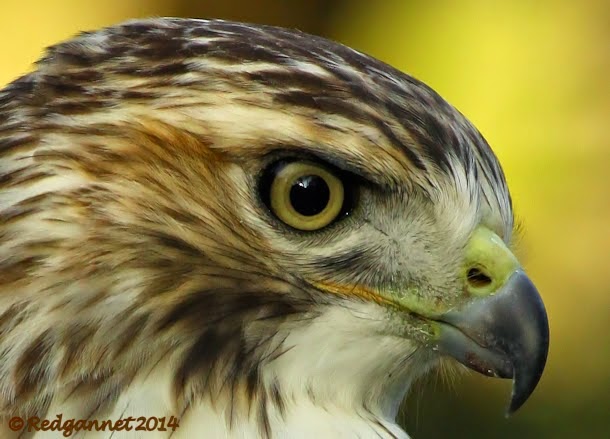 I had borrowed a bicycle and entered the park on the cross drive at 72nd St. The mound that carries a tribute to the Pilgrim Fathers brought some early birds with the regulation Blue Jay, Ruby-crowned Kinglet and the first of many Yellow-bellied Sapsuckers. 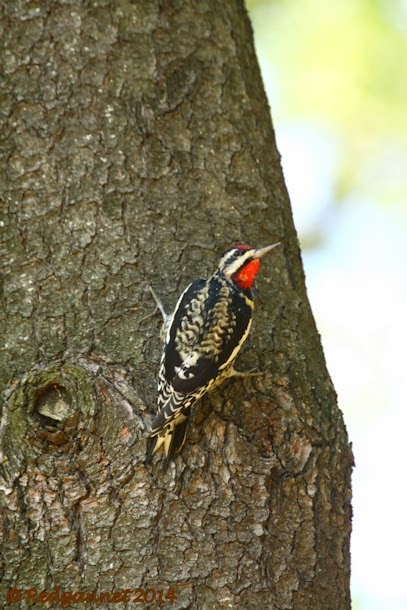 The Falconer bronze stands beneath an outcrop of New York Gneiss which harboured Chipping Sparrows, Red-bellied Woodpecker and Dark-eyed Junco. 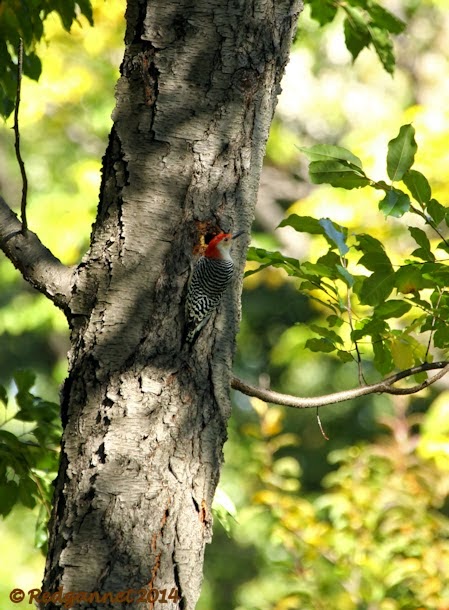 I chained up the bike by the benches at Wagner’s Cove, the southern lobe of the boating lake and immediately walked into the red-tail. It was in a tree which was rooted lower down the bank and this left it sitting at the perfect height for a picture. It appeared relaxed and I was able to sit on the rock and enjoy it for a while until a call from another hawk stirred it into action. 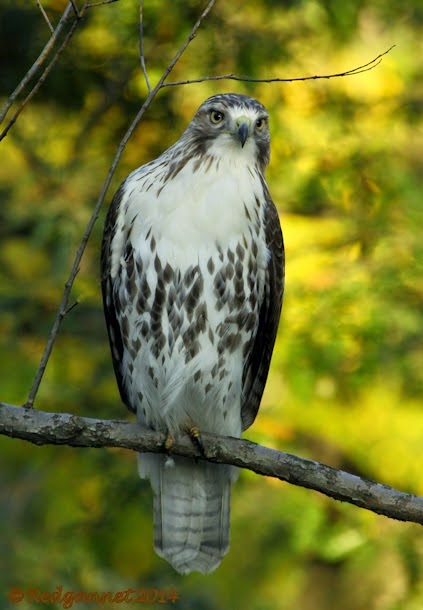 While it sat, no other birds bothered it, but when it flew, it was chased by Blue Jays and American Robins which continued to bombard it after it landed in a nearby oak. 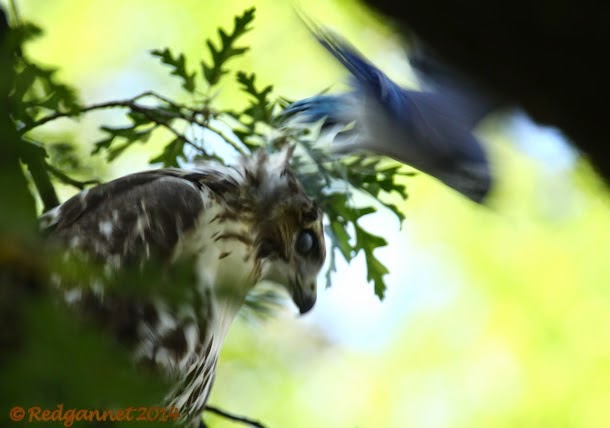 A second Red-tail cruised across the cove and my bird gave chase. Mallards on the water ducked beneath the surface each time a hawk passed over.
A Pine Warbler was seen in a conifer on the south side of Bow Bridge and raised my hopes of a warbler fest. Another warbler evaded me as I approached The Oven, but in chasing it, I ran into Cindy who thought it may have been a Magnolia Warbler. 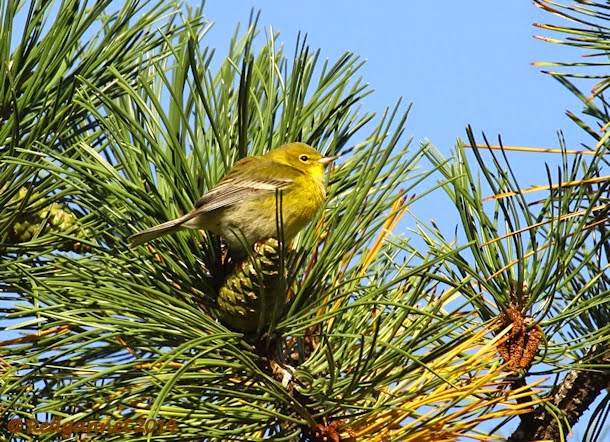 We walked together for a while and got some good views of Brown Creeper, White-throated Sparrow and dozens of American Robins along The Spit. We took a slight wrong turn on the way to the feeders which proved fortunate as an Ovenbird stepped and flicked through the rank vegetation to the right of the path. Another warbler by the Azalea Pond had us foxed, though the smart money is on Tennessee Warbler.
Cindy left me here and I continued on to Maintenance Meadow, arriving at the same time as a party of school kids. It was dispiriting that the meadow would probably be disturbed, so I moved out quickly to stay ahead of the children, but was pleasantly impressed as the teacher primed the class that I was hoping for a quiet few moments and the children very respectfully gave me that chance.
A Song Sparrow fed from low plants to the west of the meadow and a Cooper’s Hawk flew high above. 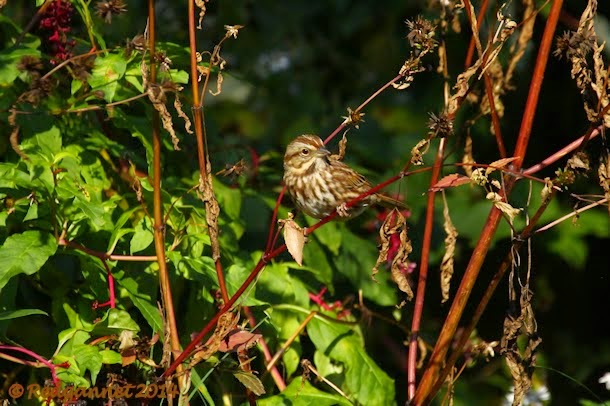 Yellow-bellied Sapsucker and Cedar Waxwings were seen in the large tree on the northwest corner of the meadow and a Northern Parula gave a poor view and had to be confirmed from a photograph later on. 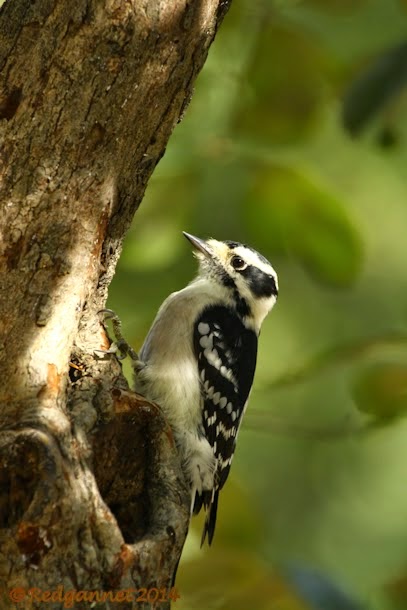 Another birder had seen some warblers up near the arboretum, so I sauntered up that way and added Downy Woodpecker, Yellow-rumped Warbler, half-a-dozen more Yellow-bellied Sapsuckers and a Northern Cardinal. 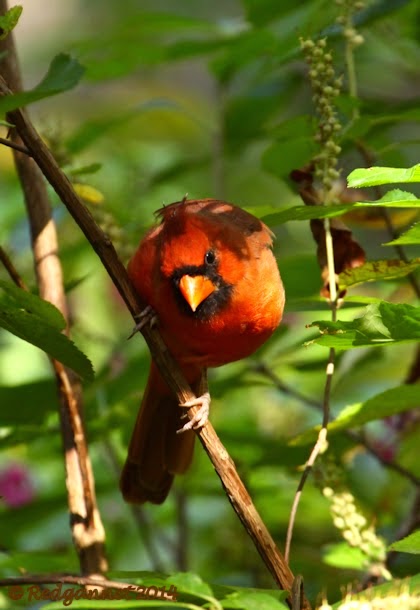 On the return south, a Red-breasted Nuthatch was added from the Shakespeare Garden, a Blue-headed Vireo was seen from the Maintenance Meadow and Karen Wang pointed out a Black-throated Blue Warbler near The Gill. 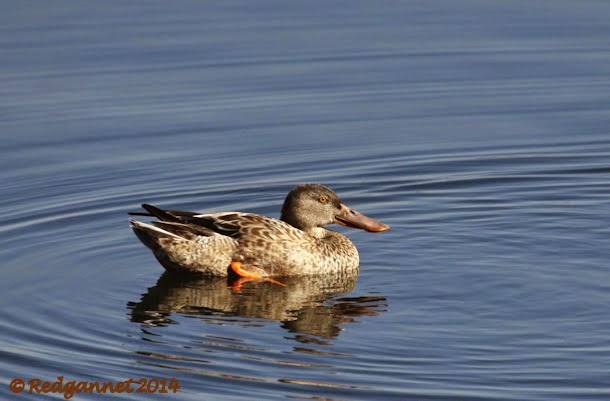 Visit the dedicatedUSA and Canada Page for more posts from New York including Jamaica Bay WildlifeRefuge and Floyd Bennett Field.
Posted by Redgannet at 13:43