You may question my motives for visiting Rondebult Bird Sanctuary when the wonderful reserve at Marievale is so close. Both are wetlands to the south-east of Johannesburg with extensive reed beds and similar species lists, but each has their own appeal. Rondebult for example is much smaller and therefore much more intimate than Marievale. Small patches of water among the reeds are each served by their own hide and the birdy action usually happens within easy reach of a decent telephoto lens. For a photographer, Rondebult can be very productive, but there weren’t any today, only me.

I collected keys to the hides from the security post (more accurately, a lady with headphones audible over the traffic, dozing in the shade) and proceeded into a small grassed area planted with trees. Domesticated geese and peacocks shared the lawns with Kurrichane Thrush and African Hoopoe. Large-billed Weavers mixed with Common Bulbuls in the trees.


At the first hide, the key fob matched the colour of the security gate that ensured exclusivity for bird watchers. Each hide was furnished with a gate and a separate key. The colour co-ordination was only coincidental on the first gate and I had to resort to trial and error for the others. In a country where personal security is a full-time consideration (and at a site where the security lady was deaf and asleep), being able to lock myself into a hide made for a very relaxing stay. I assume that there is more than one set of keys in case 2 birders have seperate agendas. 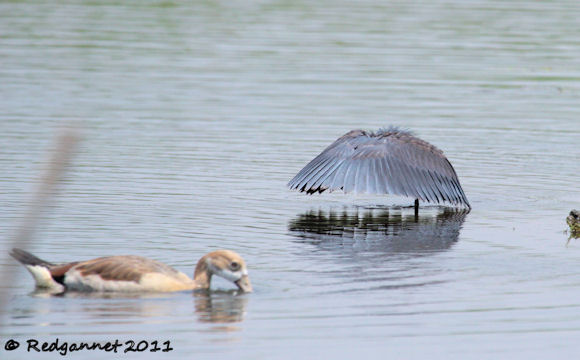 A small island in front of the hide held a family of Blacksmith Lapwings, Cape Sparrow and a Black Heron fishing with its characteristic umbrella technique which shades the water reflections and enables it to see its prey more easily.
The second hide was very close and looked out onto the same body of water. In the reeds, a Large-billed Weaver appeared to be trying to tie three stalks together as a base for its “finely woven oval nest” (Hugh Chittenden, Roberts Field Guide 2007). This nest is built by the male. The females’ involvement is limited to the soft interior furnishings. I assume therefore that this is a precocious immature male which looks very like the female until he attains his adult plumage. 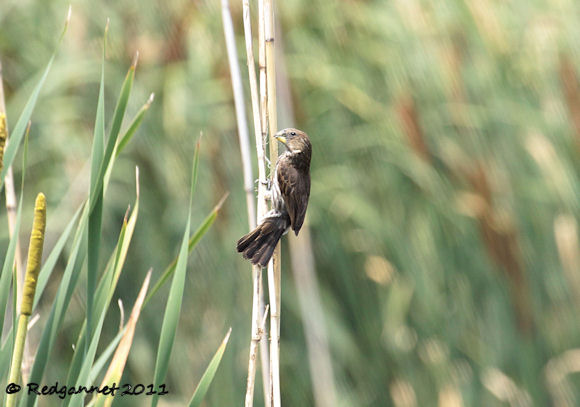 Out on the water, Red-knobbed Coots were the most populous bird with Egyptian Goose and Dabchick adding a little variety.


The most conspicuous birds were the colourful weavers. Southern Masked Weavers, Southern Red Bishops and Yellow-crowned Bishops are obvious and abundant near any water during the austral summer. 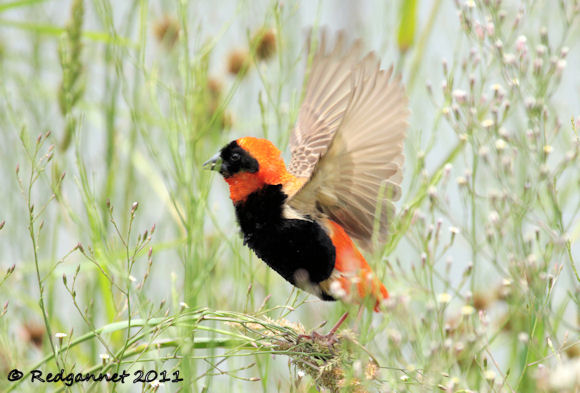 Rondebult provides them with everything that they need; reeds and water, therefore a constant chizzing and wheezing of performing males provided the sound track for the morning. The third hide opened onto a tract of long grass before the water. Weavers were collecting seed heads and carrying them away rather than feeding on them there and then, so the assumption here is that this female Southern Masked Weaver had selected a likely male and was lining his nest. 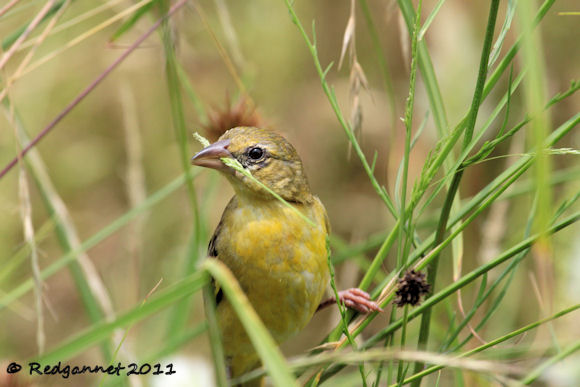 But even the combined colonies of gregarious weavers were outnumbered by a large roost of European Swallows in the reeds opposite the fourth hide. I guessed at about 200-300 until something disturbed them and the hirundine cloud that erupted from the reeds must have numbered 1000+. A Little Bittern went up with them and ‘quarked’ across the water to hide further along.
A couple of ducks dropped in for a quick visit. The Red-billed Teal swam out of sight around the corner while the Fulvous Whistling-Duck took one look and was gone. 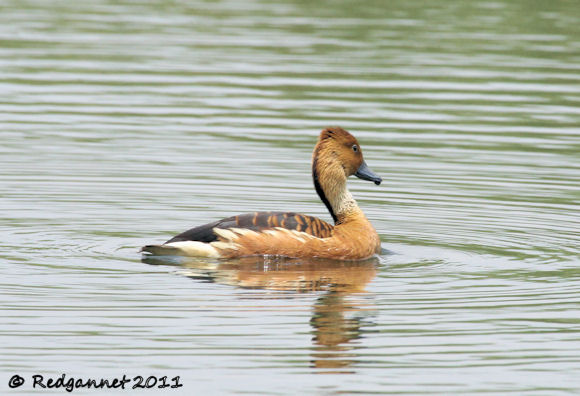 I left the remaining hides until my next visit. I had arrived at 10.00 and had lost myself to the day very quickly. Since Marievale was so close, it seemed the perfect opportunity to compare them under the same conditions. Neither would really get a good chance to shine during the heat of the day, but such is the lot of a birder who must conform to airline schedules (my plane had not landed until 08.30 and I had been very lucky to disembark, hire a car and get into a hide by 10.00. The airport is south-east of Johannesburg and our hotel is to the north of the city. It makes sense and saves time and mileage to bird the reserves to the south straight from the flight).
Bird species; 41