The Botanical Gardens are an obvious choice to go for a walk and to get your eye in when visiting Sao Paulo.  The Jardim Botánico is a safe and secure area with a small entrance fee and regular security presence throughout the garden.

At the entrance, it became immediately clear that I needed to press quickly on into the forest to get beyond hundreds of school children in baying, class-size packs, but they had already spread throughout the gardens and I resigned myself to a noisy morning. 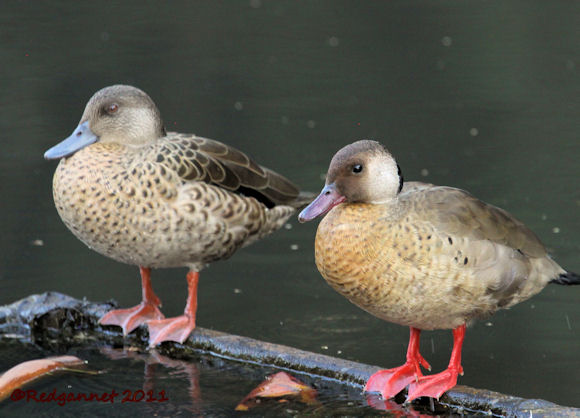 The first birds, as is usual here, were Palm Tanagers. Southern House Wrens and Gold-chevronned Tanagers joined them in the palms at the approach to the first lake.  Brazilian Teal appeared unmoved by the business of the gardens. 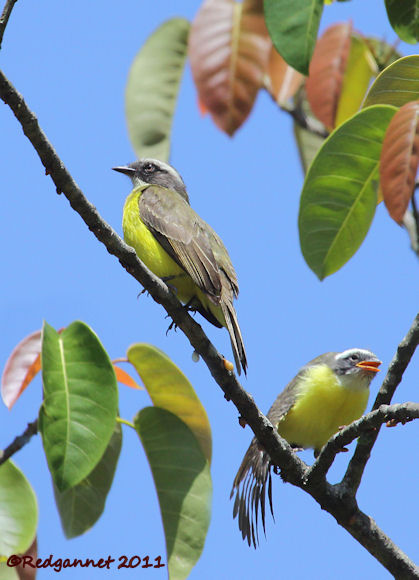 A Social Flycatcher chick was able to make itself heard above the hubbub and its parents attended it closely without actually feeding it at all.
Kiskadee and Tropical Kingbirds were seen close to the water and the dragonflies had to be permanently on the lookout for swooping flycatchers. 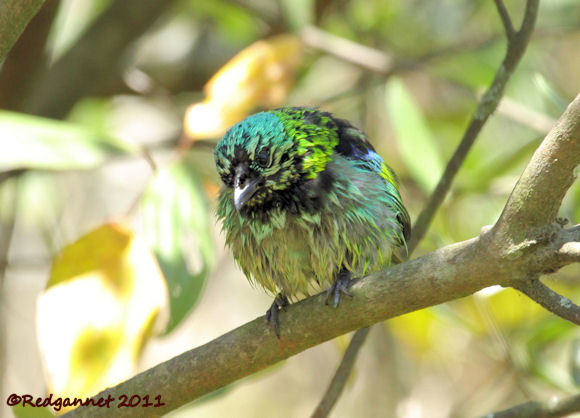 Just beyond the top of the lake is a small un-manicured area of bushes with a narrow path running through it. A Green-headed Tanager had been bathing from a log strategically placed in the shallow water here. It just goes to show that even the most stunning looking of us need a few moments to regain our composure after a wash. 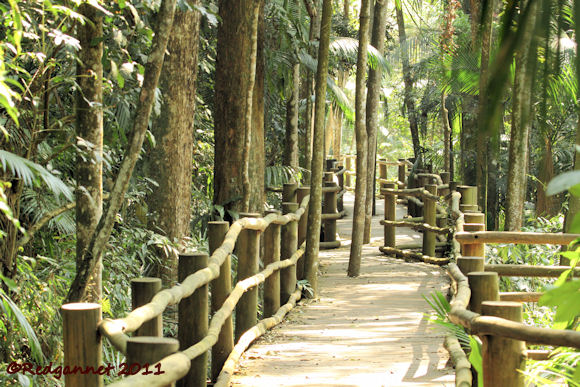 A new boardwalk has been built since my last visit, running alongside a stream to a spring in the forest. It was getting hot now as midday approached and the forest was deliciously cool with no biting insects yet. The Sun crossed The Equator last week, heading south into the austral Spring. The biting insects will appear once the summer rains begin, but for this late September day, I remained un-bitten.
The children were having their picnic lunches out on the lawns and the forest was quiet. A bunch of fruit hung down from a palm tree attracting thrushes. The Rufous-bellied Thrush was common and easily seen throughout the gardens, but a bird which kept shyly hidden behind the fruit was a Yellow-legged Thrush. A Lineated Woodpecker drummed and made a flypast further in and a Red-bellied Toucan alighted in a tree and looked back to check me out. 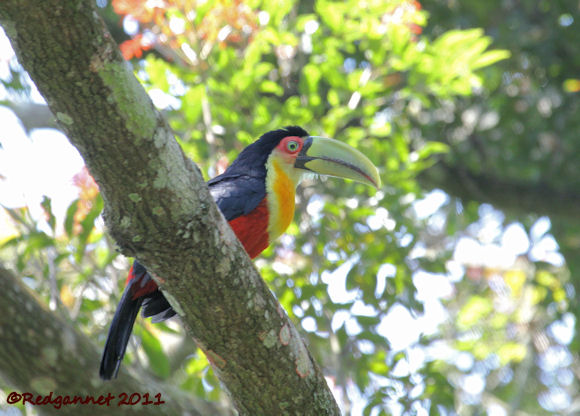 Flash guns! That’s what I need. A big battery of flash guns and someone to carry them for me. Birding and getting pictures in the dim light of the forest is quite a challenge and I am going to need more practice in the cupboard under the stairs before my next attempt. This was the most productive part of my visit accounting for Dusky-legged Guan, Pale-vented Pigeon and a suspected Ochre-colorred Piculet which would be a lifer if I could confirm it. It was here that I ran into the resident Red Howler Monkeys. 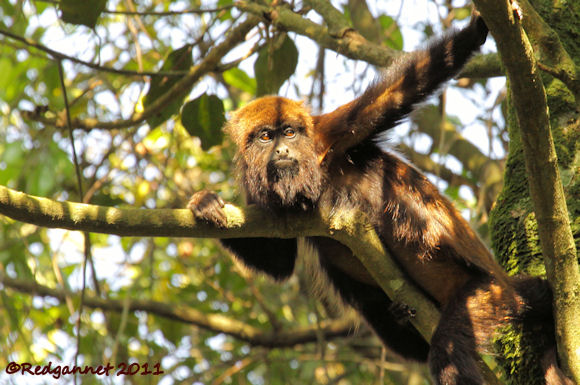 Lunch was over and the children began to venture, nay swarm, along the boardwalk. The shrieks of delight as a monkey tinkled onto the boardwalk and then let his poorly digested breakfast splat against the planks from 10m up, narrowly missing a teacher, were ear-splitting. Apart from being noisy (after all, that is what children everywhere do best), they were polite and eager to see monkeys doing monkeys' business and other natural stuff, which was encouraging.
Keeping left from the end of the boardwalk, a path leads into the forest, parallel to the lake-side path. I walked along and back again seeing White-spotted Woodpecker, Rufous-browed Peppershrike and of course, more Rufous-bellied Thrush. 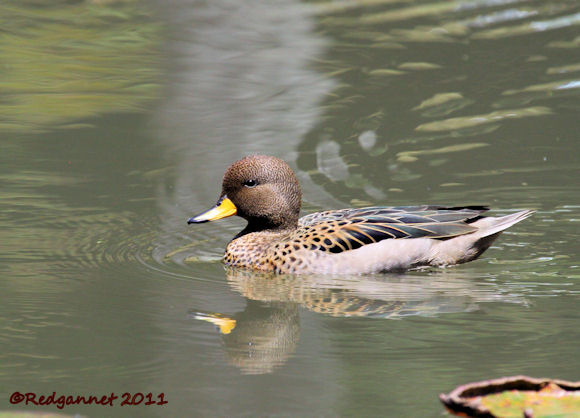 The children were heading home now and the noise was retreating, like an ebbing tide, from the gardens. Birds began to appear and feed in the more relaxed light of the early evening. On the top lake, a couple of Yellow-billed Pintail shared a quiet moment in the water lilies which were just starting to close as the day began to fade. Back at the natural area a Green-headed Tanager had come for another bath, but this time I caught him before he got in. Oh for a correct exposure to show off those colours! 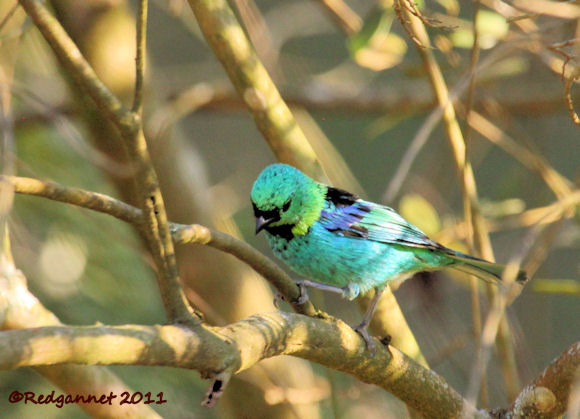 I am assuming this bird to be the female Ruby-crowned Tanager. There were a few of the jet-black males around, but there are so many chestnutty brown birds in Brazil that it is not always easy to be sure. 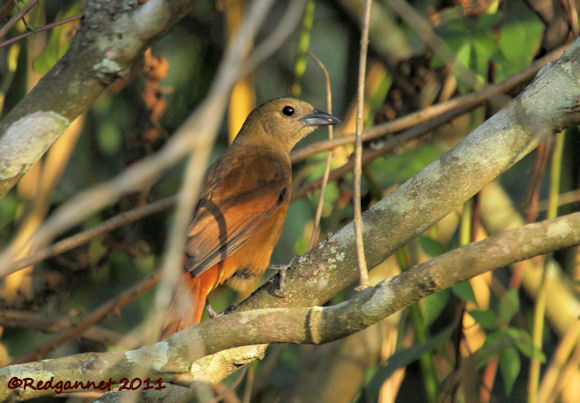 I was delighted to get this picture to confirm my earlier sighting of an Ochre-collared Piculet as it came down low and into the open. 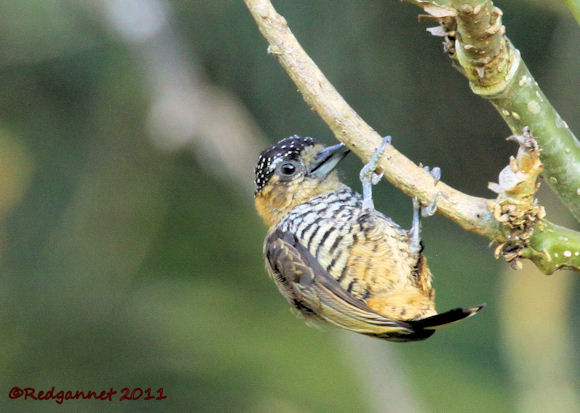 5 O’clock was approaching and I had to be out of the gardens soon. On my way back to the gate, a Yellow-billed Pintail treated me to a parting show from the ornamental pond in front of the greenhouses. 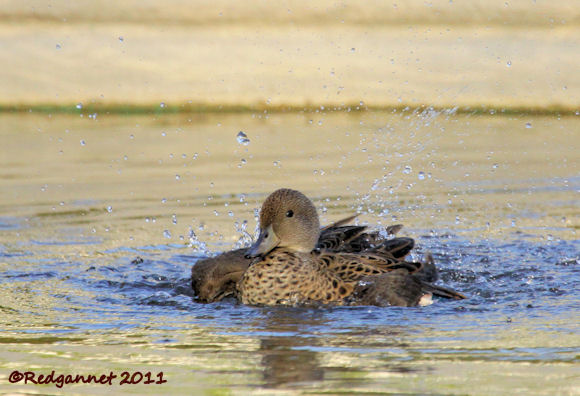 A last shot from the stand of trees near the entrance before wending my weary way home,  gave me this picture of a Pale-breasted Thrush. 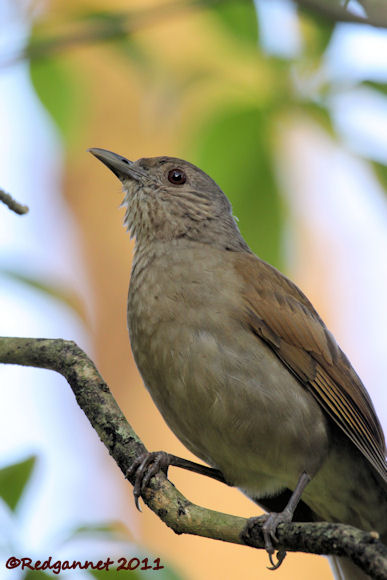 Birds seen; 33
American Egret 1, Brazilian Teal 4, Yellow-billed Teal 6, Black Vulture 30, Dusky-legged Guan 8, Common Moorhen 5, Southern Lapwing 12, Picazuro Pigeon 3, Pale-vented Pigeon 1, Plain Parakeet 5, Green Kingfisher 1, Ringed Kingfisher 1, Red-breasted Toucan 2, Ochre-collared Piculet 2, White-spotted Woodpecker 1, Lineated Woodpecker 1, Social Flycatcher 5, Great Kiskadee 6, Tropical Kingbird 1, Blue-and-white-Swallow 6, Southern House Wren 8, Pale-breasted Thrush 4, Yellow-legged Thrush 2, Rufous-bellied Thrush 40,  Rufous-browed Peppershrike 2, Bananaquit 10, Ruby-crowned Tanager 6, Sayaca Tanager 10, Golden-chevronned Tanager 2, Palm Tanager 15, Fawn-breasted Tanager 6, Green-headed Tanager 2, Rufous-collared Sparrow 10.
To get to there, take the Metro to Conceicao (just before Jabaquara at the end of Linha 1 or Azul (Blue) Line). Take a taxi from here to Jardim Botanico, Parque do Estado, Cursino (10 mins, Reas15 (@ 2.60 = £1)). The gardens are open daily from 09.00 until 17.00, but are closed on Mondays.
If you are unable to find a taxi for the return, there is a bus stop just outside the main gate. Most buses pass close to a Metro station. Make yourself familiar with the Metro Logo and look for it on the side of the bus. Better still bring the number of a recommended taxi firm.

Follow this link to a previous post from the Sao Paulo Botanical Gardens.
Posts from other Sao Paulo Sites can be seen by following the links below;
http://redgannet.blogspot.com/2009/08/sao-paulo-august-2009.html
Visit the dedicated Central and South America Page for more from this region of the world.
Posted by Redgannet at 21:48