Conyer (soon to be) Nature Reserve.

My son has taken up squash and was attending a coaching day at a club close to the estuary. It seemed foolish, nay environmentally irresponsible, to drive all the way home only to return a couple of hours later to pick him up, so I continued north to a less-well-known tract of mud at Conyer (Google ref; 51 21 22N 00 49 04E).

The approach to The Swale (the body of water separating the Isle of Sheppey from mainland Kent) was through a disused brick and cement works which has been re-colonised by Blackthorns and Elders.  Planning permission has been granted for 24 houses to be built on the foundations of the old works, but more importantly, permission was granted on the proviso that the majority of the site be set aside as a nature reserve. Blue Tits, Great Tits and European Robins sang from the thorn bushes which were still in full bloom in mid-April. My first (UK) Barn Swallows of spring whooshed over my shoulder and north across the mud.

Sadly the game of squash is not tide-dependent and I found that the waters had receded as far as they could go. The waders that I had hoped to see were very distant. With a scope, I was able to pick out Common Shelduck, European Curlew, Common Redshank and Pied Avocets. On an island in The Swale, Black-tailed Godwits roosted in rows along the waterline and a Sandwich Tern surveyed the area from a perch at the western end. Black-headed Gulls make an awful racket even when they are roosting. Perhaps 200 or so were screaming and crying from the salt marsh island making me suspect that there may be a breeding site there. It is a low-lying island and very close to the high-tide level so it would be a precarious nesting site.

Remnants of the old wharf still exist and from here you can look out across the widest stretch of The Swale to the Isle of Sheppey over three quarters of a mile away. With the tide at its lowest ebb, it was almost entirely mud. I have an old map from 1908 which shows the navigation lines for use by barges transporting raw materials in and newly-made brick out from Conyer Creek. They appeared to correspond almost exactly to the channels and gullies cut through the mud by the receding waters a century later.

A flock of Black-tailed Godwits gave a flypast after being disturbed from their roost by the incoming tide, sadly I could not stop to wait for the tide to push the birds closer in. Time and rain was pushing me on. As I left, I was struck by the sight of a Eurasian Collared Dove that had made its nest at the top of a rainwater downpipe. With a drought in progress the bird could be forgiven for choosing the nest site, but with a storm coming, the poor choice would soon become apparent. 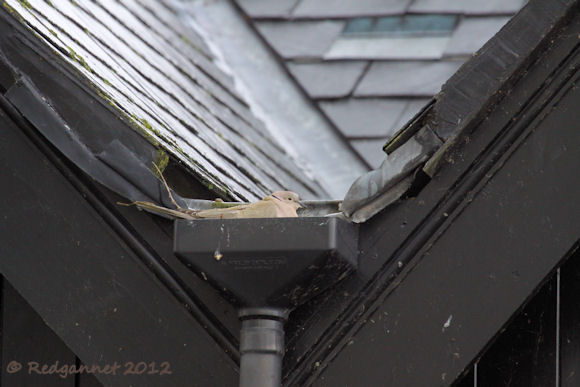 My son’s squash training continued the next day and I returned to Conyer for another visit with my Father-in-Law, Frank, to find that only the top of the bird’s head was visible and the nest must have shrunk and compacted with the water. As I write this up a few days, later, it is still raining (such is the nature of drought in the UK) and I suspect that the dove’s perseverance will have been in vain.

A Stoat dashed across the path in front of me and disappeared into the thickets of thorn scrub and bracken. I was very excited as I very seldom see Stoats. Even better the next day after I dropped Frank off, I stopped in at Bax Farm and saw two Stoats. They were very secretive, keeping mostly to the reeds alongside the river but I was able to track their progress upstream by the leaping frogs and the hystreical Moorhens.


Visit the dedicated UK page for other posts from Kent including Oare Marshes and Mote Park.
Posted by Redgannet at 23:08