An early San Francisco morning found me waiting on a street corner as a black Honda pulled up. Inside was my chaperone for the day, red-letter beat writer, the acclaimed Walter Kitundu. Walter had been spotted and added to my Beat Writer Year List at a bar on the previous evening where we agreed to meet up and visit the Palo Alto Baylands the next morning. 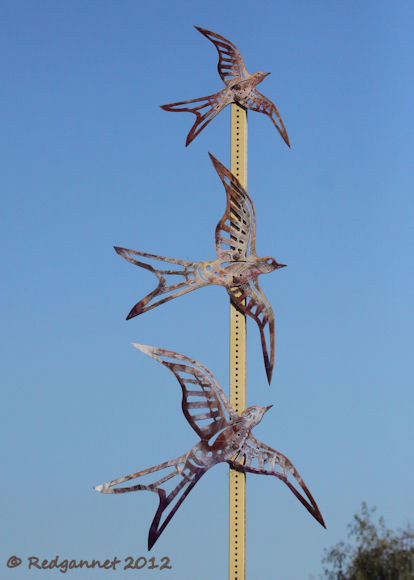 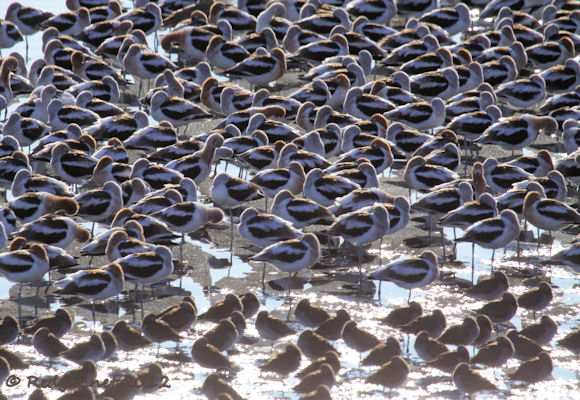 Anna’s Hummingbird, White-crowned Sparrows and California Towhees greeted us as we made our way to the wader roost, north, just beyond the parking lot. American Avocets and (what we eventually decided to be) Long-billed Dowitchers made up the vast majority of the birds here. Marbled Godwits, Northern Shovelers and Black-necked Stilts added significantly to the biomass. 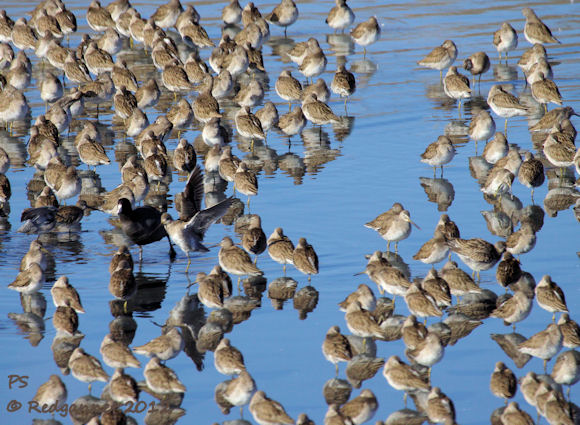 American Coots muscled their way through the flocks of dowitchers like ice-breakers, pushing the roosting birds aside and leaving an empty wake which was gradually re-filled as long-billed, grey waders seeped back into the void left by the passing coot. 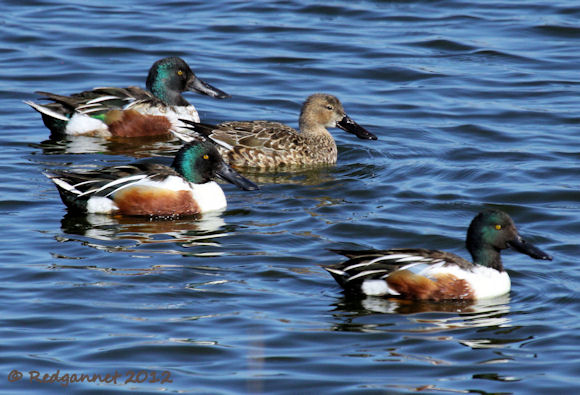 Northern Shovelers
A path runs along the bund between Charleston Slough and Mayfield Slough. The morning light favours viewing on the left side and the birds here can be seen well. Cinnamon Teal and Green-winged Teal were outnumbered again by the predominant shovelers. 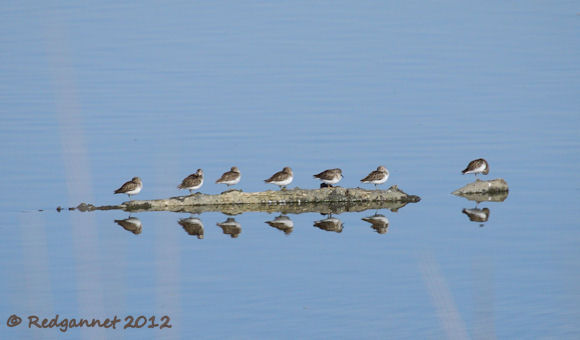 Least Sandpipers
Small peeps found relief from the high tide by dotting themselves along any piece of raised matter that would enable them to keep their feet dry. A Western Sandpiper very obligingly hoisted himself onto a perch (doing a great job for a non-percher) between the Least Sandpipers to make the difference between his dark legs and the Leasts’ yellowish ones more apparent. 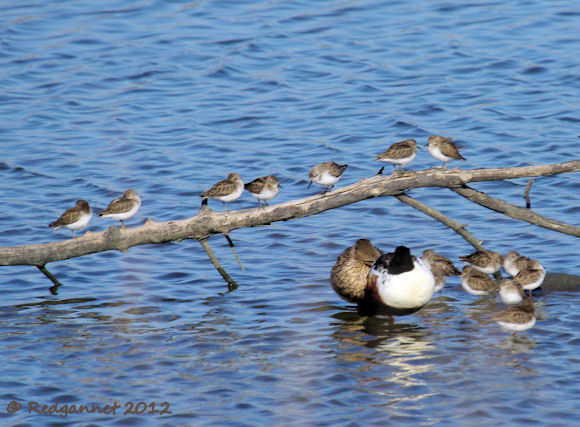 To our right as we walked (Corey, note ‘walked’ not marched), Charleston Slough played host to Canvasbacks with their long-necked profile easily distinguished against the back lighting. One was good enough to cross over onto the left for a photo opportunity. 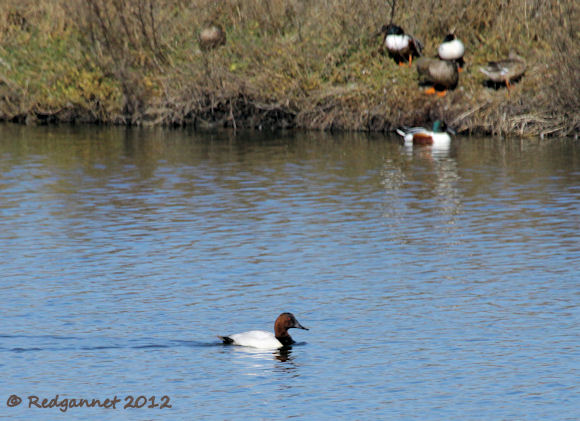 Canvasback
Mayfield Slough does not have a very big outlet to the open water. A small, bridged gap in the dyke at the northern end does not allow much impact of tide here and most of it has been taken over by marsh and grass. 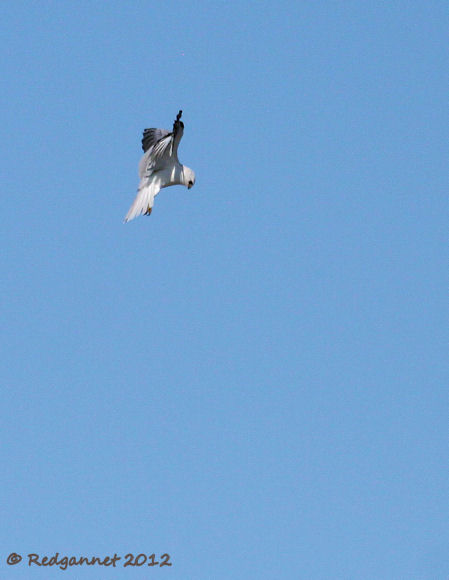 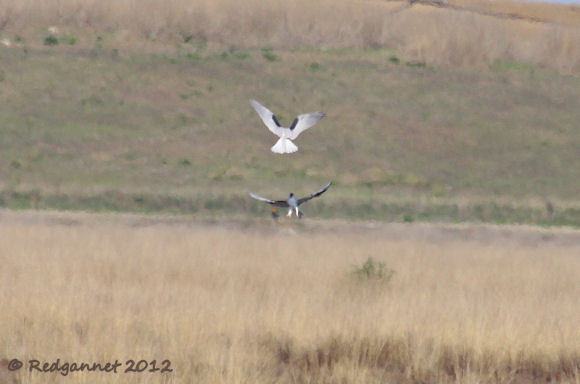 White-tailed Kite
As it flew off, its mate (we assumed) rose from the rough grasses and reeds. The pair tumbled acrobatically around each other as they flew across the slough passing the gift between them. Walter may have a video of this and I will post a link if he publishes it. 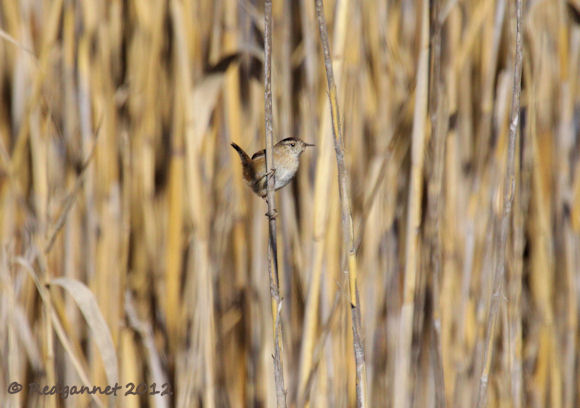 Marsh Wren
We returned along the bund where Marsh Wrens sang from the reeds and responded quickly to a playback. A Savannah Sparrow showed well. 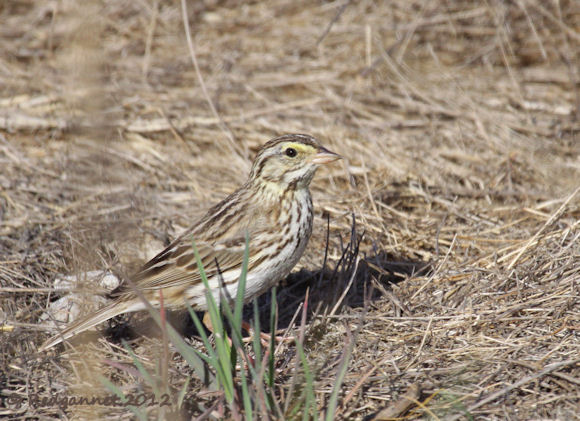 Back at the wader roost, the birds had spooked earlier and the furrows cut by the coots were visible. I suspect that Shoreline Lake is salty, but don’t quote me on that. Three Willets roosted on the jetty railing. 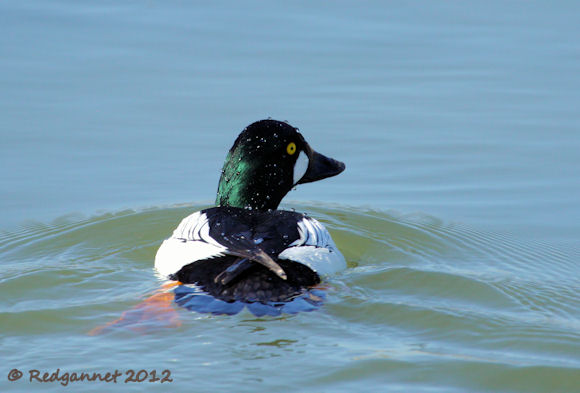 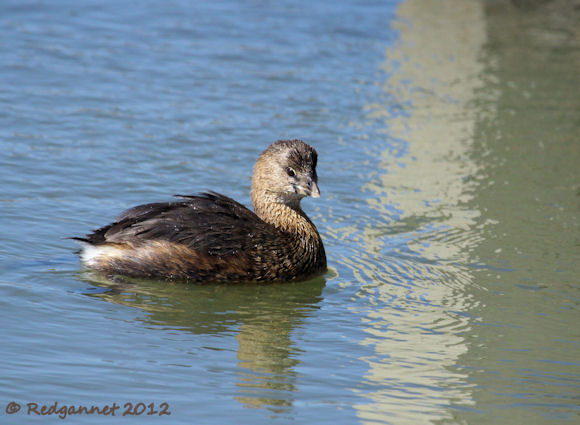 Pied-billed Grebe
A California Gull was out-catching a Little Egret as they fished in a strong current. 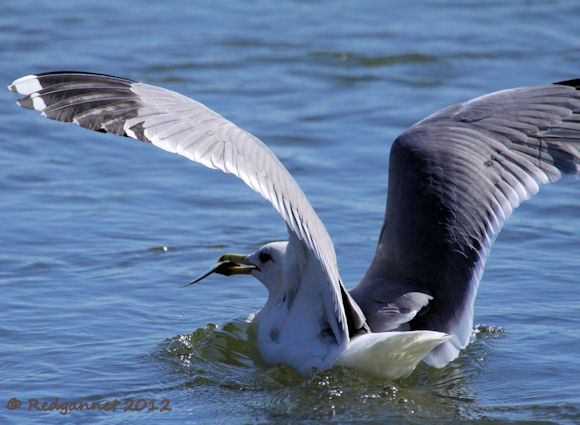 This area is very popular and busy, especially on a beautiful Sunday morning. Joggers and families were out enjoying the fresh air and birds. There was no security presence here, but plenty of solid citizens to make it feel comfortable and non-threatening. We arrived early enough on a Sunday morning to park easily, but it may become an issue later in the day. Find Charleston Slough 35kms south of the International Airport by turning off from the 101 at San Antonio Road (note; use the slipway that passes beneath the San Antonio Road bridge before leaving the 101. This will bring you back over the freeway and head straight to Terminal Blvd. See Google Earth 37 25 41N 122 06 05W to make it clear). 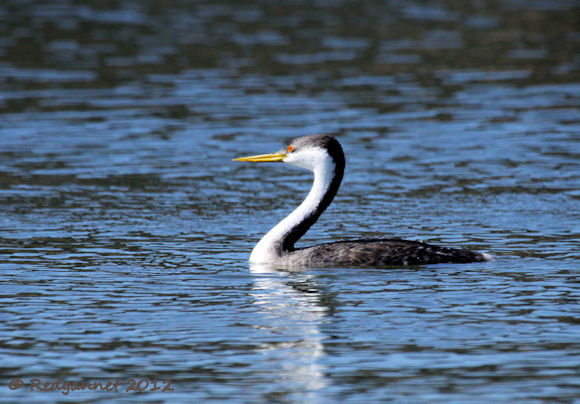 Visit the USA dedicated page for other sites in San Francisco and beyond.
Charleston Slough at Terminal Boulevard, Palo Alto, San Francisco, March 2012
Posted by Redgannet at 22:30