First light caught me pulling in at the Lucy Evans Baylands Nature Interpretive Center. The highlight here is the boardwalk that protects the salt marsh from trampling feet and takes visitors out to the edge of the lower lobe of San Francisco Bay (Google Earth ref; 37° 27’ 34”N, 122° 06’ 21”W). 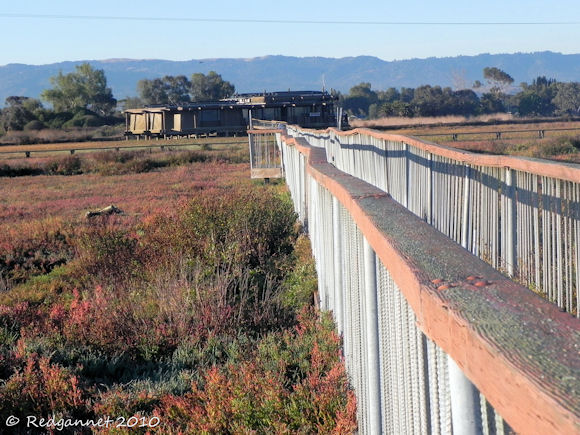 American Avocets roosted at high water, waiting for the levels to start dropping again and expose feeding opportunities in the fresh mud. 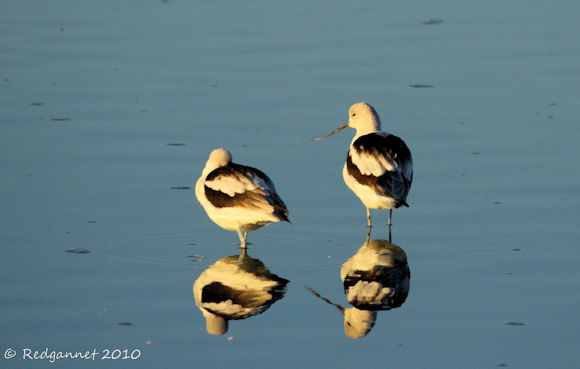 My reason for coming here this morning is that I am convinced that one day, Lady Luck will smile on me and a Black Crake a California Clapper Rail and maybe even a Sora will pop into view None of them did any such thing, but you never know until you try. Song Sparrows aplenty and a Black Phoebe caught my eye, but no rallids. At the viewing platform at the end of the boardwalk, a few Least Sandpipers approached closely and even sat up out of the early morning shadows. 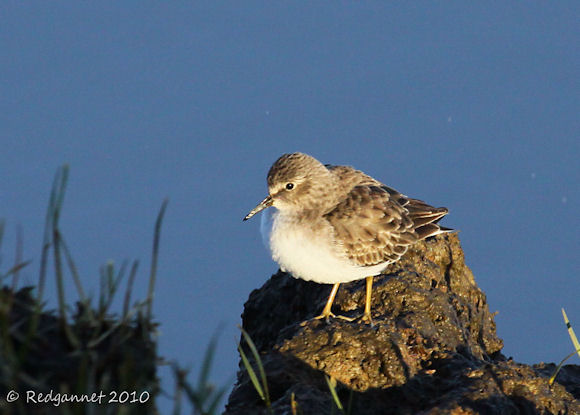 There is a trail that leads around the back of the duck pond which leaves the morning light over your right shoulder when walking it in an anti-clockwise direction. A single Dunlin flew in and nearly landed at my feet. It stood tall and I became very excited, hoping for a moment that it might be a Stilt Sandpiper. I am far more used to seeing dumpy Dunlins hunched over, feeding in large flocks and it took a while to convince myself about this tall, slim singleton. 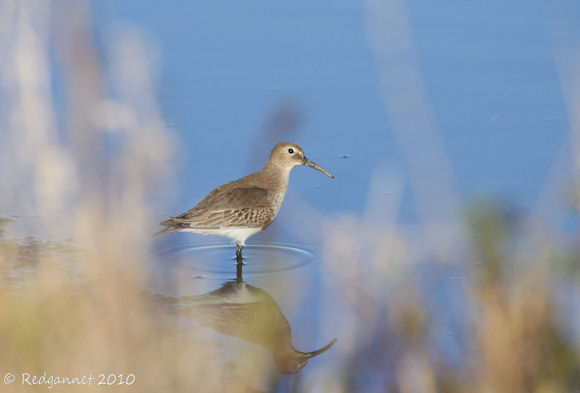 Northern Shovelers, Green-winged Teal, American Wigeon and plenty more avocets were in the water on the right of the trail. On the left, a Red-tailed Hawk perched watchfully in a tree over-hanging the path. I talked gently to it as I passed under the branch that it was on and it ignored me until I was beyond it and had the light in my favour. 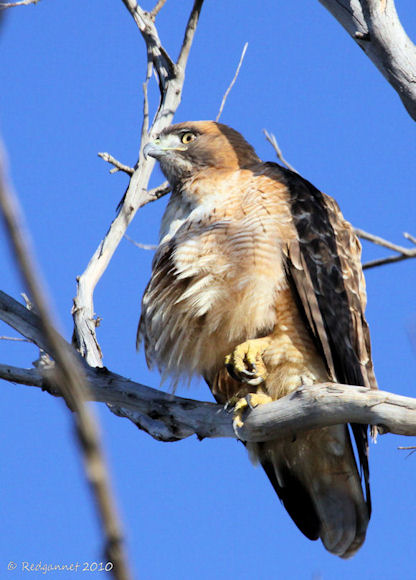 I find that talking to the birds has a two-fold benefit. It reassures the birds that I am not trying to creep up on them, so they don’t perceive me as a threat and don’t feel the need to maintain a prudent flight distance, while people who see me talking to birds do perceive me as a threat and feel the need to keep a prudent flight distance.
Although the hawk was looking out over the slough, none of the waterfowl appeared worried. Can they tell, for instance, that the redtail prefers rodents or perhaps that it had already eaten? Do ducks have a built-in field guide to enable them to identify threats? Neither this Ruddy Duck, nor the Canvasback paid the hawk very little attention. Perhaps they knew that they were safe from the hawk out on the water? 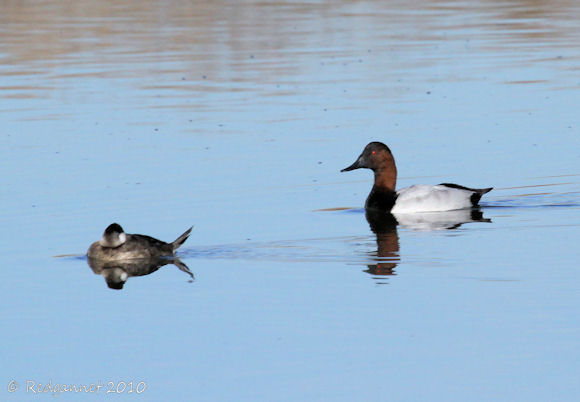 By the pond, pigeons and gulls waited for scraps from the duck feeders.
Western Gulls, Ring-billed Gulls and a Glaucous-winged Gull 3rd yr (with a big bill that might indicate some western influences) sat patiently on posts waiting for the children that they knew would come. 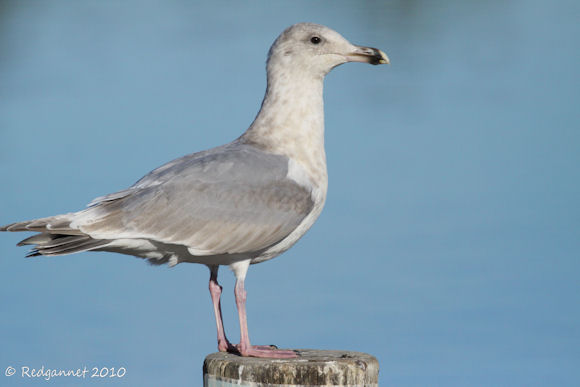 Some Herring Gull look-a-likes had no markings on their heads and were more likely to be pale-eyed westerns. 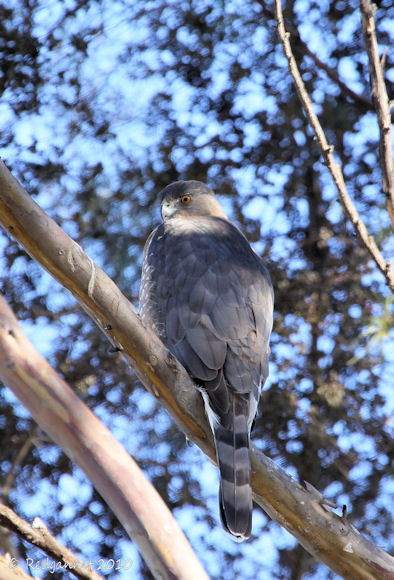 Across the road, a Cooper’s Hawk waited quietly. The slough was draining and exposing lots of mud behind the hawk. Marbled Godwits, Grey (Black-bellied) Plover, Kildeer, and a few Long-billed Curlews probed here. There were plenty of dowitchers feeding on the newly exposed mud. The ones closer to me seemed to be chuckling as they fed, so I am assuming them to be Long-billed Dowitchers. I was not able to identify the rest of them with any real confidence. 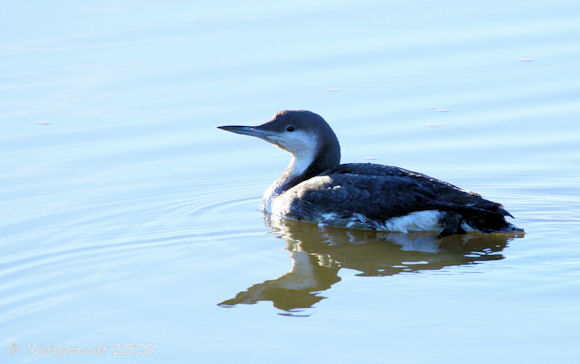 A loon was hauled up onto a mudbank and belly-slid back into the water when it saw me. Here again I had a crisis of confidence. The diver, which I assumed to be a Common Loon, showed no neck markings. I had a fairly good look and at no point could I see any indentation that would have assured me of its provenance. The bill seemed robust enough, with the suggestion of an angle on the lower mandible, to allow me to overcome most of my doubts, but I was still niggled about the neck markings. Are they a constant feature in all plumages and forms? G is favouring Pacific. After trolling Flickr for Common Loons, I have to agree with G and concede that it is "slight". He is tactfully pushing me towards Pacific and I will agree with him. Thanks G. 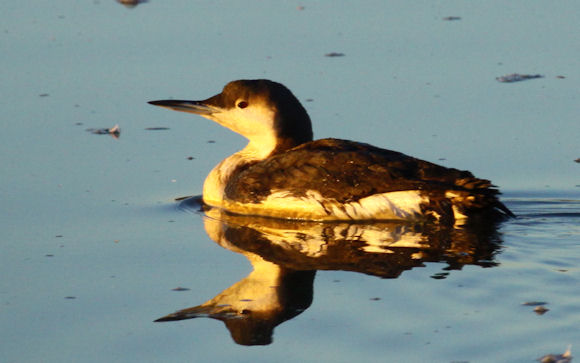 I withdrew to a nearby restaurant for an early lunch. It had been a confusing morning and I wanted to consider the loon, gulls, dowitchers and Dunlin. I was greeted eagerly by the Spanish owner who clapped his hands and called excitedly to the kitchen staff, “ ‘El Gordo’, esta aqui y tiene hambre!”

Palo Alto Baylands is about 20 -25 miles south on Highway 101 from San Francisco International Airport (SFO). There are a few access points from the 101 at Embarcadero Road, Terminal Boulevard and Shoreline Boulevard. The boardwalk and Interpretive Centre are at the end of Embarcadero Rd.
I had arranged to pick up a car from the airport which has a 24hr rental plaza. Catch the BART (San Francisco's Subway system. $8.20 one way from Powell St. Station. First trains from 04.30ish.) to the airport SFO and transfer onto the Airtrain which is the closed circuit airport transport system. Allow one hour from the hotel to the rental desk.

Other posts from San Francisco can be found at the links below;
http://redgannet.blogspot.com/2010/02/palo-alto-baylands-san-fancisco.html

There are more Californian and American posts on the dedicated page.
http://redgannet.blogspot.com/p/posts-from-usa-and-canada.html