The day dawned bright and warm in the city of San Francisco, but by the time I stepped from the bus at Golden Gate Park, the fog had rolled in and it was cold. My colleagues tell me that it had been fine all day in the city so I am assuming that the mist must burn off as it moves inland. It left me with very cold hands and reminded me to be prepared for fluctuations in weather and temperature here. 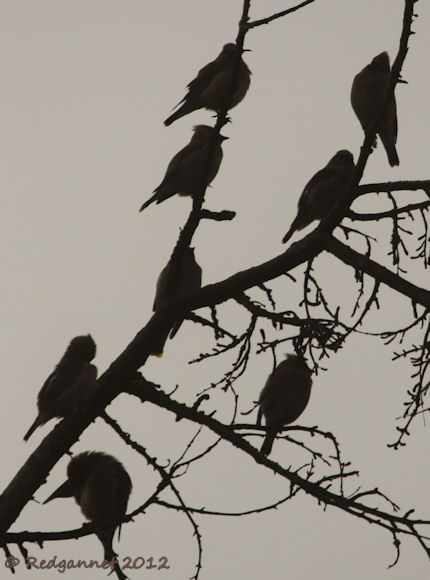 The Cedar Waxwings were almost lost to the fog and I had to clean my binoculars a couple of times as the condensation dropped from the trees. The Botanical Gardens are gated and were not yet open so I passed on towards Stow Lake. On the right, I found a hot spot at the entrance to Music Concourse Drive (Google Earth ref; 37 46 10N 122 28 05W). 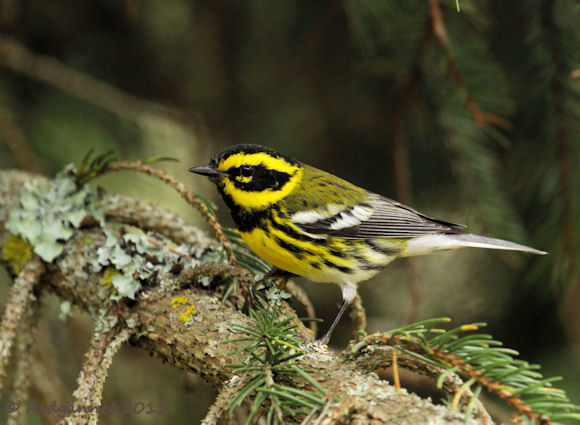 On a cold, misty, March Monday morning, people were still keen to get their exercise and a couple of sporty girls called me over to point out a Red-shouldered Hawk in a low tree. 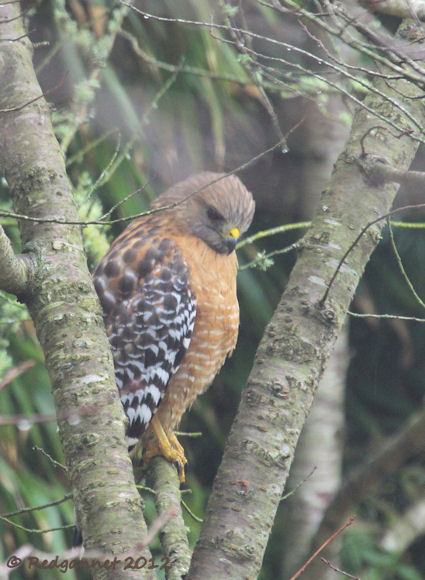 There was a huge assortment of bird feeders, varying in sex, race, creed and level of sanity. One rolled tiny bits of bread in his fingers and targeted individual birds, another sprinkled monkey nuts over her shoulder as she walked. The nuts fell, she knew not where, nor did she seem to care, but a California Quail was quick to take advantage when a jogger crushed one as he passed by. 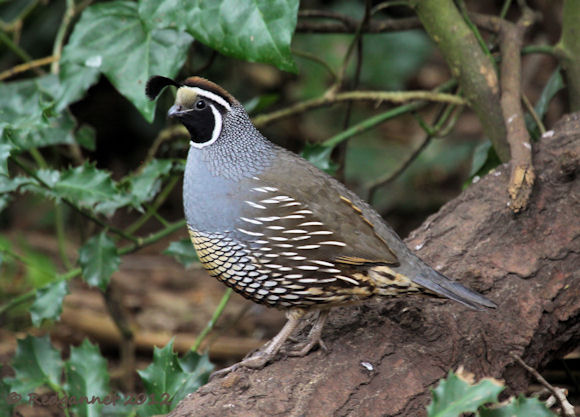 Sparrows seemed to be the main beneficiaries of this largesse and were well represented with Golden-crowned and White-crowned Sparrows easily seen. 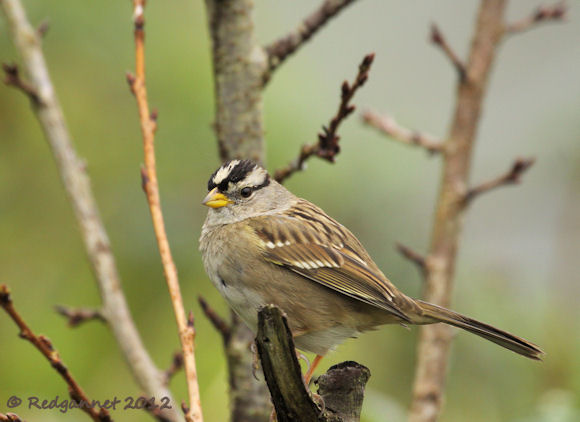 Song Sparrows were in good voice even on such a drab morning with the fog damping the sound. Bold individuals perched high and proud singing for the world to hear. 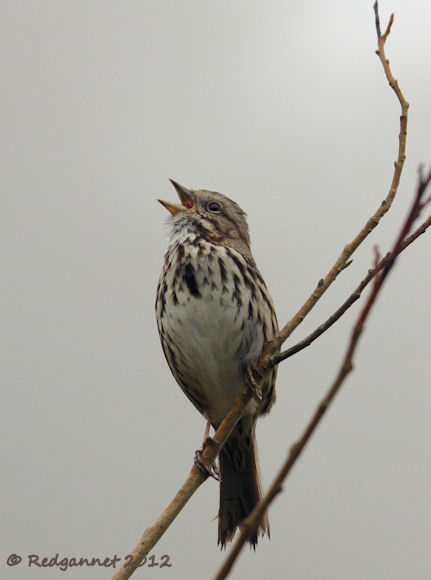 At Stow Lake the most obvious birds were the gulls with the Western Gull standing out as the most numerous. American Coots were also seen along with Pied-billed Grebes and Mallards . 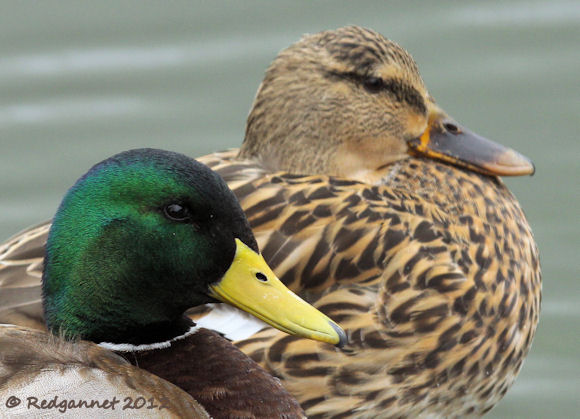 My mission today was to find some Great Horned Owls that Walter had told me about opposite the Bison Paddock. I was about halfway there and had to pass under Crossover Drive and continue west along John F Kennedy Drive. 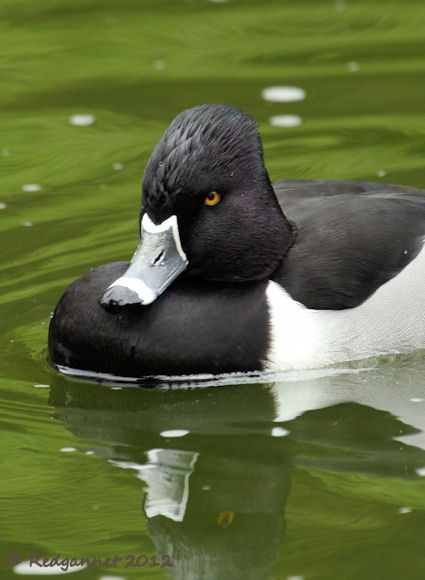 Very soon after, I came to Lloyd Lake which held a surprising amount of waterfowl. Ring-necked Ducks were the most numerous, but more spectacular were the Wood Ducks and the Hooded Mergansers. 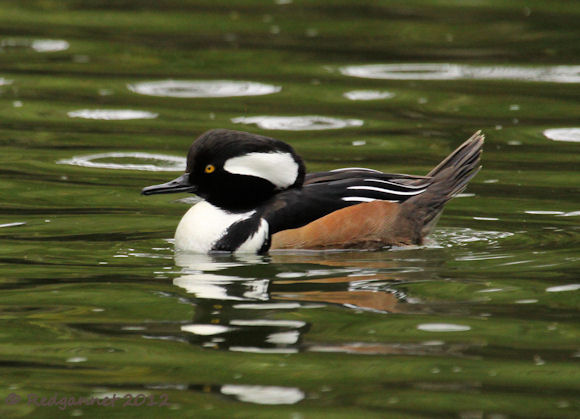 A female merganser had to fight for a place on a log with a Mallard. Getting out of the water onto the log was difficult enough for her without the duck making it even harder.

It was almost midday and at last the fog was beginning to lift by the time I reached the Bison Paddock and began the search for the Great Horned Owls’ nest. It was said to be in the crook of a tree immediately across the road, but it wasn’t immediately apparent. I walked back and forth a couple of times and decided that the likely looking mess in an evergreen was probably what I was seeking. Nothing could be seen in the nest from any angle, but I was sure that I was looking in the right place. Eventually a chap came by on a bicycle and stopped to look up into the tree. He told me that the chicks had left the nest at the weekend, but that they should still be in the same tree as they were not yet able to fly. Well I scoured it from every viewpoint, but could not see anything in the tree. A Red-tailed Hawk flew over a couple of times and even settled in the tree at one point. I am sure that if there were any owls close by either the hawk would have reacted to their presence or the parent owls would have had something to say to the hawk. 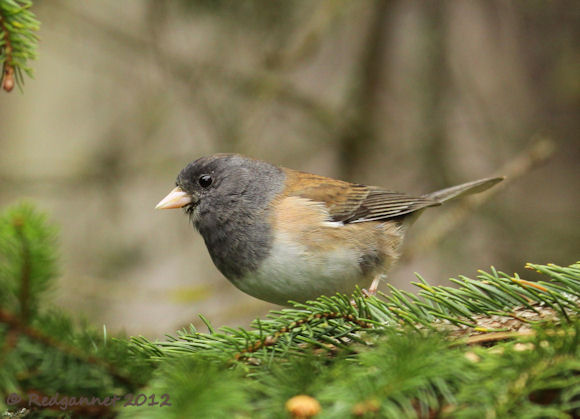 While I waited to see if anything would happen, Dark-eyed Juncos, Chestnut-backed Chickadees, Pygmy Nuthatches and Townsend’s Warblers kept me company. And so I had to start back. The Red-tailed Hawk made a low pass across the Bison Paddock and flushed a Killdeer. I suspect he was after gophers of which there was plenty of evidence. 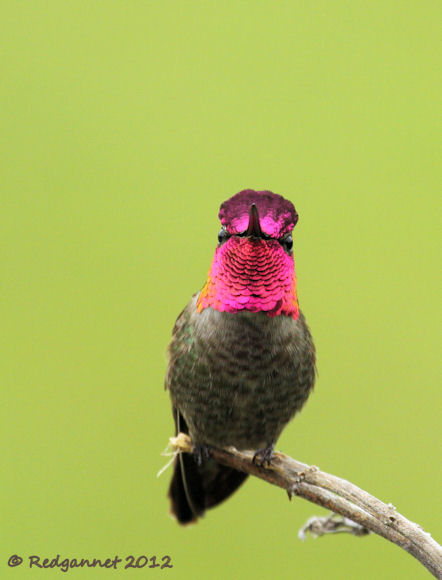 An Anna’s Hummingbird sat tight as I passed and I stopped to see if he would stay for a picture. He proved to be a very willing subject and I almost lost track of time.

Passing Stow Lake on the return journey, I decided to take one last look for some owls. They are often seen at the top of Strawberry Hill, an island in the middle of Stow Lake. But here again, I failed to find them. The normal Townsend’s Warblers and Yellow-rumped Warblers were there, but there was also a noticeably different one. It was a very brief glimpse and I put it down as a Hermit Warbler. It occurred to me that this may be a significant sighting so I tried to get a better view. She wasn’t very cooperative, but then I wondered if they would be called Hermits if they were gregarious party goers. Eventually, I got another peek and confirmed the yellow head, but I was not entirely confident. I contacted the collator of the park sightings who suggested that a first-year over-wintering Hermit Warbler would not be shocking, but made no mention of other sightings. I am holding back on the Hermit Warbler, waiting for some confirmation. Articles on Townsend's/Hermit hybrids show a bird which fits very closely with what I saw, so I am hoping that the park's collator will nip out, have a looky see and confirm. 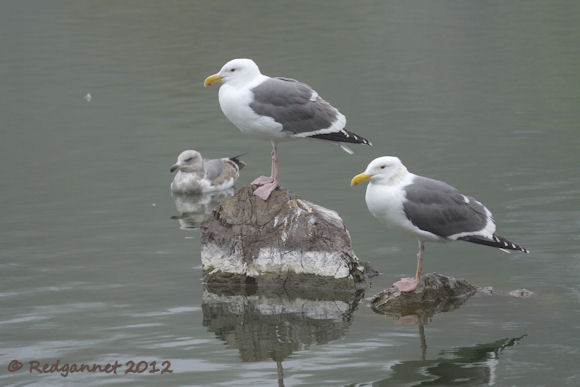 Bus no 71 runs from Downtown San Francisco along Market Street before cutting up onto Haight St. It is only 15 minutes to the park at Stanyan St, but a number of vagrants made me feel slightly uneasy here and I may continue on to the Botanical Gardens/Stybing Arboretum at 9th St. for my next visit.

Visit the USA dedicated page for more sites in North America, California and around SanFrancisco, including, Palo Alto Baylands and Pillar Point at Half Moon Bay.
Posted by Redgannet at 21:53