Perhaps it is time that I started reading my own blog; after all, the post describing El Dorado Nature Center clearly states that it is closed on Mondays. I felt very foolish on this Monday morning as I stood outside the gate, but was determined to salvage something from the day. 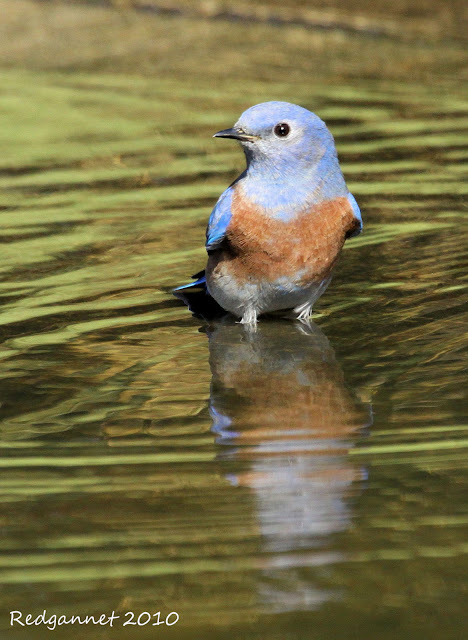 El Dorado Park, Areas II and III are directly across the road from the Nature Center and, more importantly, they were open. So I took a chance and I’m glad I did. 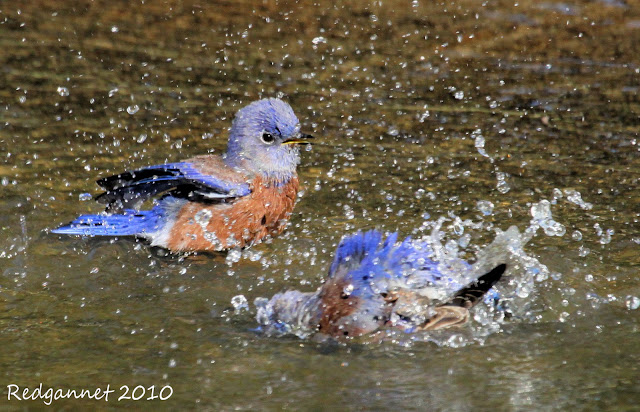 Another gamble that paid off was bringing the camera with me. My big lens had broken the day before, and only had a very limited range of focus and zoom but with a bit of shaking and jiggling, I might be able to use it. 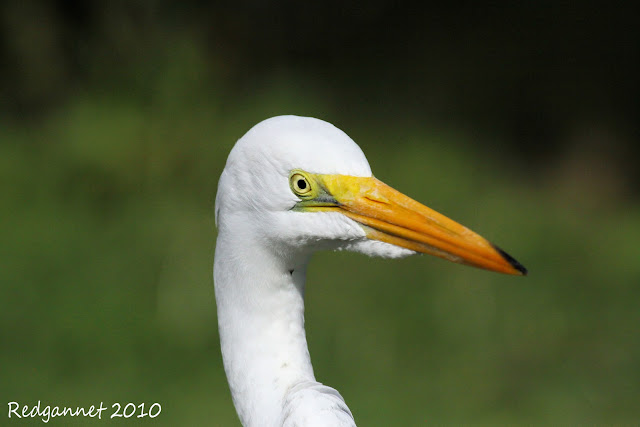 I began by following an American Great Egret which was stalking the edges of a lake near the entrance. I was intending to circle it anti-clockwise, which coincidentally appeared to be the Egret’s plan too. It was very approachable and never strayed more than about 5 meters ahead of me. 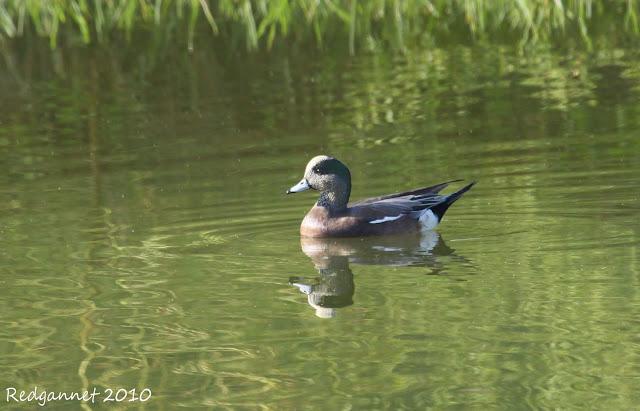 Most of the duck on the lake were Mallard which looked acclimatised to picnickers. A single American Wigeon was much shyer. 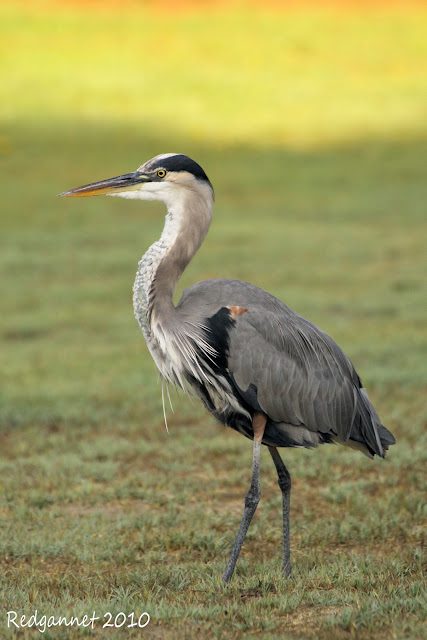 On a grassy slope in the distance, a Great Blue Heron was standing very still and watching the ground intently. It was still there when I reached that side of the lake and I noticed that it had its eye on a gopher hole. A plug of darker, damp earth had been pushed out onto the spoil heap of excavated dirt, indicating an active gopher beneath. 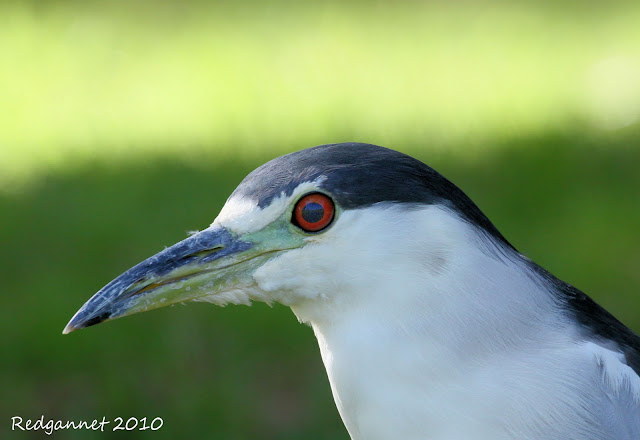 I was later told that the herons love them and that Black–crowned Night Herons could also often be seen staking out the gopher holes in the early morning hoping to catch one.
Comment received from Liz gives a link to gopher-chomping egret. Don't go there if you are squeamish.
http://www.flickr.com/photos/iamsina/3398537379/in/set-72157611556463477/ 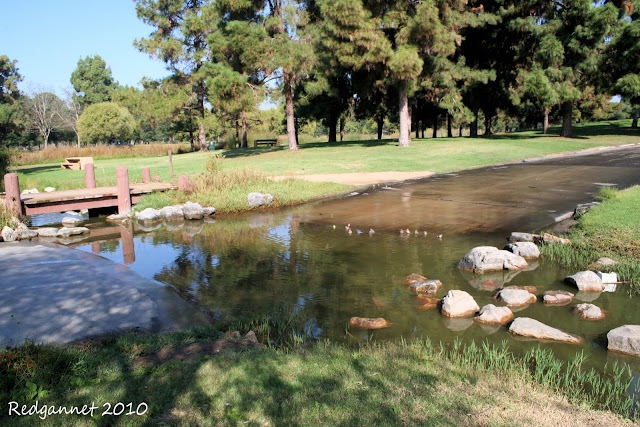 The lake by the entrance is fed by a stream that crosses the road at a ford. The birds were enjoying a sunny bathe in the shallow water. Western Bluebirds, House Finches and American Goldfinches made a very colourful soup. 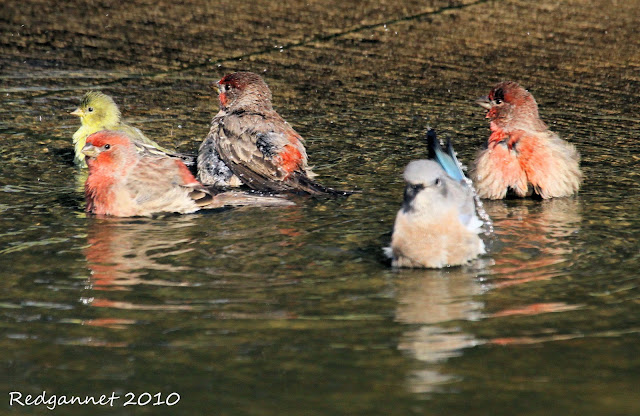 An alien Scaly-breasted Munia brought some earthy brown tones to the palette. 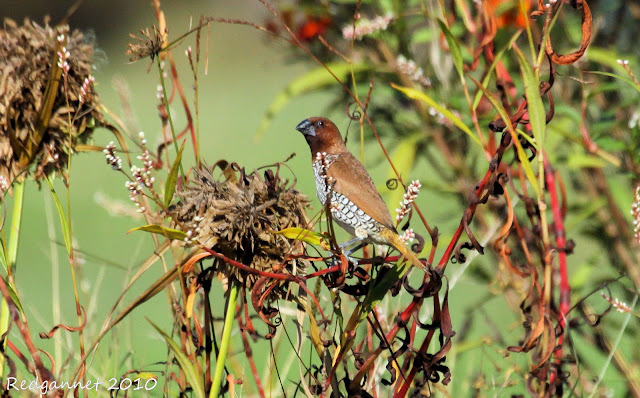 I was happy to see that a couple of the drivers who were visiting the park were considerate enough to stop and glance in my direction to check that I had finished shooting before crossing and putting the birds to flight. 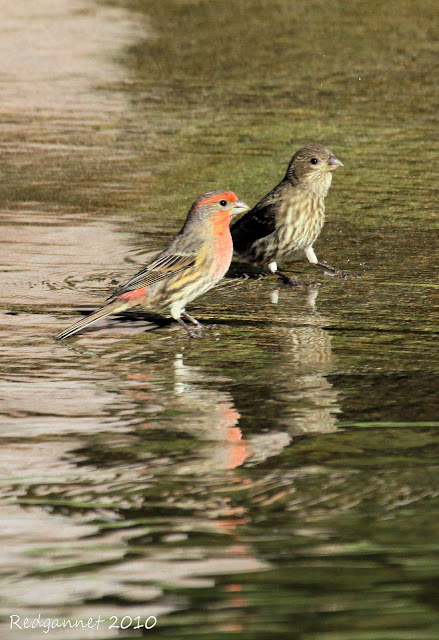 I didn’t mind them driving through the water as the birds returned very quickly and it was very pleasing that strangers could be so thoughtful. 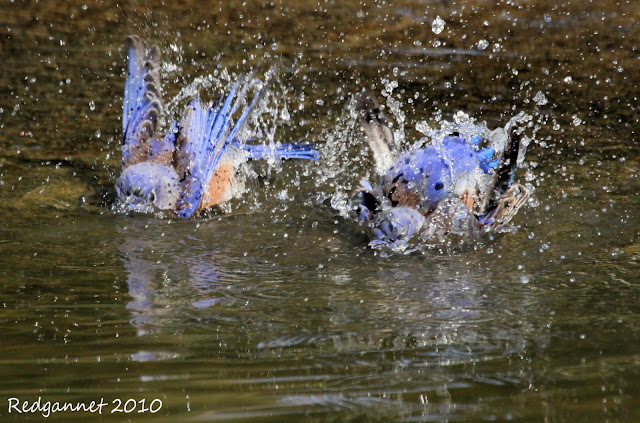 I met a few other people in the park and they were universally polite. Merri even offered me breakfast!
A photographer named Jeff (Geoff?) was generous with his information, telling me about the Ospreys that liked to fish in the other lakes within the park. Apparently, when the weather cools off a little, the Parks team stock the lakes with trout which attracts the Ospreys. This attracts photographers too who line up at the lakeside hoping to capture that classic “talons out” picture. 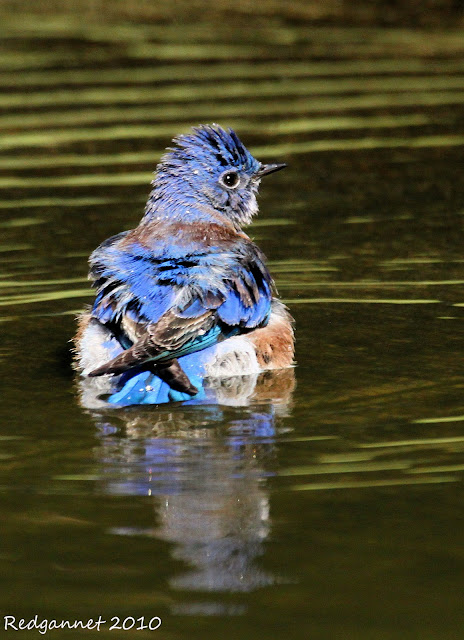 I followed the stream up to the next lake which was surrounded by a concrete path. There was no vegetation or features in the lake which left me feeling a little empty until I found the next lake across Wardlow Rd.
This lake had a more natural feel to it with tule beds along the bank. There was still a concrete path, but it was much nicer than the other one. 3 Ospreys circling overhead added to the ambience.
I have another trip to Los Angeles rostered for November. Perhaps if it has cooled down enough and my lens has been fixed.....

Areas II and III are markedly different to Area I. The El Dorado Nature Center is sited in Area I and is thickly wooded with a stream meandering through the woods to connect 2 mature lakes. There are managed trails and an interpretation centre. Area II is across the road on the north side of Spring. Area III is the furthest north after crossing Wardlow. These areas are parkland with pine and mixed plantings of deciduous trees. A couple of lakes have a natural look to them, but the fishing lake in the middle of Area II is very sterile in appearance.
There is an issue with this site in that it is sometimes used as a film shoot location. When the cameras are in, the park is often closed to the public. I don't know where to check for filming schedules and I am told that they can over-run and the park will remain closed as long as the cameras are rolling. 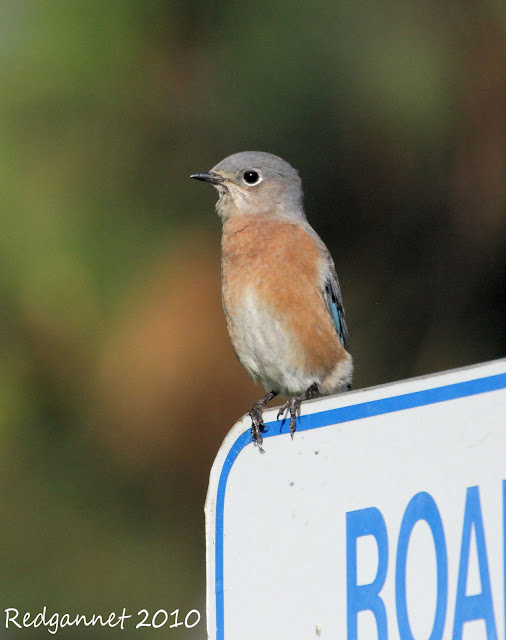 But....., if you are the type that never tires of bluebirds, then this park is the one for you. In every tree, on every snag and on every patch of lawn, there were Western Bluebirds. I was wondering if this was a seasonal abundance, but am not sure about bluebirds' migrating habits. Perhaps they were coming down from the hills as the days grow shorter? Yellow-rumped Warblers were abundant too with their "chip"s coming from all directions it seemed. 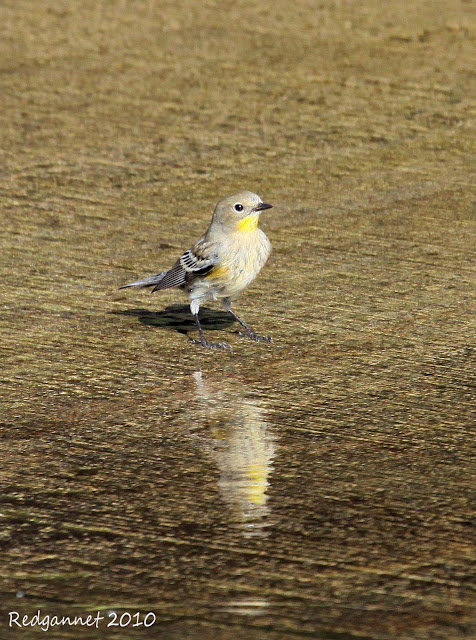 I wished that I had brought my field guide when I came across a yellow flycatcher. Cassin’s and Western Flycatchers are superficially very similar. I had been called to do this trip while I was doing standby from the airport. So I had elected to leave my vast collection of guides at home and to rely on my skill and experience, both of which proved inadequate. I used my dictaphone to note down as many field notes as I could, but the only mark that really separated the two was the pale outer tail feathers, a distinguishing characteristic of the Western Flycatcher. Cassin’s Flycatcher has pale ends to the tail feathers.
I caught the 173 bus from stop F at the temporary transit mall in Long Beach. About 30-40mins later, shortly after passing the pyramid at University of California Long Beach, we arrived at Studebaker and Spring. There is parkland and a golf course on the right as the bus drives along Studebaker. Get off at the intersection, turn east onto E Spring St and walk with the park and golf course on your right. Cross the drain after 700m. The fenced area on the right is El Dorado Nature Center. The entrance is 400m further on (at Google Earth ref; 33*48'35"N, 118*05'09"W). On the other side of Spring you will see archery butts and then the entrance to the El Dorado Park, Area III.

For other posts about Redgannet in California, follow these links;

For more posts from other sites in America try the USA and Canada page tab at the top of each post.
http://redgannet.blogspot.com/p/posts-from-usa-and-canada.html