The convivial Athenian Café, in Pike Place Market, overlooks Elliot Bay and the waterfront of Seattle. During a jolly good breakfast, I was mugging up on gulls. 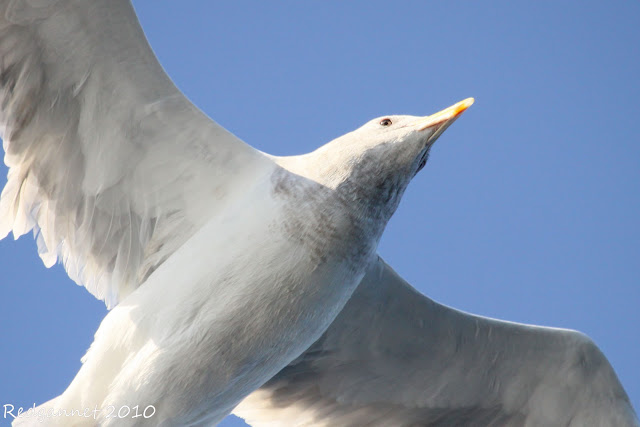 Most frequently encountered here is the Glaucous-winged Gull, but other “light-backs” and hybrids call for a keener eye than I can normally lay claim to.
I usually react in one of two ways when I see gulls; either I ignore them and pretend I haven’t seen them, or spend ages poring over a field guide, comparing live birds to the illustrations and getting frustrated. This is a practice that I can easily adapt to suit empidonax flycatchers, cisticolas from Africa and South American woodcreepers. 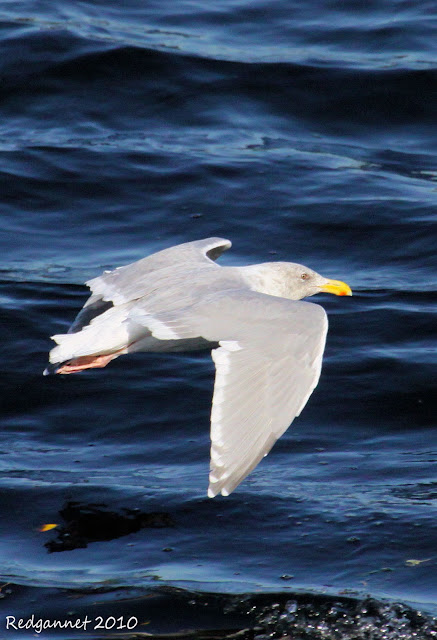 It can be slightly dis-spiriting to know that after revising and memorizing the identification characteristics that will serve me well today, I will have forgotten them by the next time I visit and will have to start all over again.
My powers of retention have diminished in direct proportion to my ability to recall stored information. Sometimes I think my brain must be full and I have to delete some information to make room for any new stuff. When the new stuff is imported, it has to go in the space vacated by the discarded memories and thus has no connecting synapses to fire recollection and joined up thinking.
And so it was as I headed out into what has been described to me as a “hybrid swarm”. 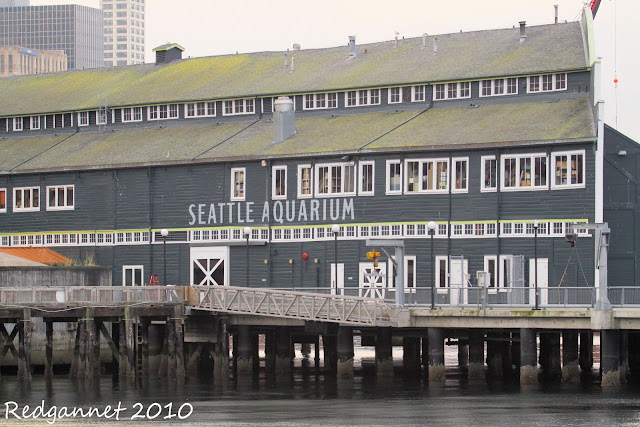 Actually, I was distracted from the gulls almost as soon as I reached the waterfront. From a platform adjacent to the Seattle Aquarium, I saw something large breach from the water. There was a confusion of fins and splashing and thoughts of Orcas or Great White Sharks flashed through my congested, coffee-fuelled mind. 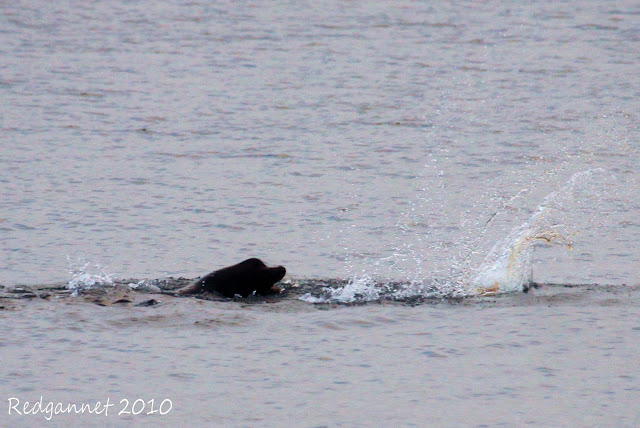 It was in fact a Stellar’s Sea-lion and it had caught something substantial to feed on. It pulled and pummelled the prey into manageable chunks to eat it. This left plenty of morsels to attract gulls which flocked around, trying to get to some breakfast. 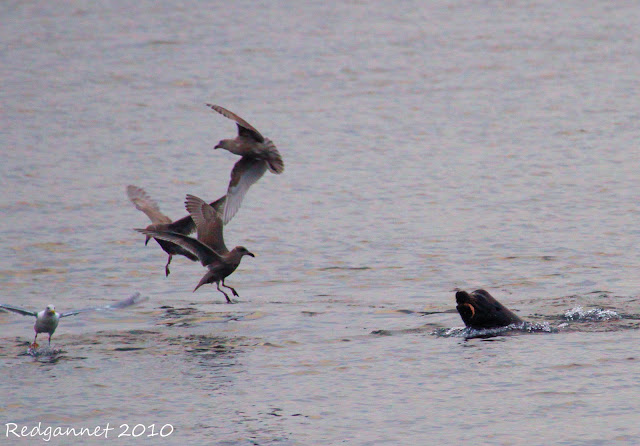 Five minutes walk south from the Aquarium is the ferry terminal. Washington Ferries operate from Pier 52 with departures to Bainbridge Island and Bremerton. I had chosen the latter, longer voyage which had a scheduled sailing time of 60 mins. It cost $6.90 and payment includes the return sector.
The BBC weather service had let me down with their prediction of a warm sunny day in Seattle. The cloud hung low over the city and it was cold out on the water. I was surprised to see a Belted Kingfisher on part of the dock structure as if to see me off.
Apart from one American Herring Gull, I had only seen Glaucous–winged Gulls. But, given a reasonable run at them, I had been happy with identifications of juvenile and first winter year birds as well as the adults. A late bloomer was still being fed by a parent which gave me a good clue. 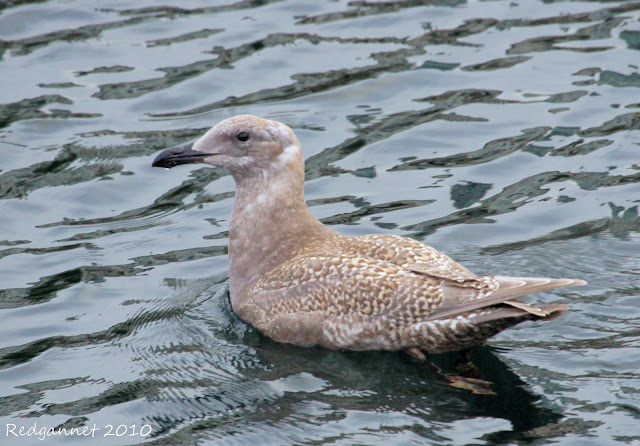 The ferry to Bremerton cut straight across Elliot Bay towards an inlet on the other side of Puget Sound. There is a viewing window on the outside at each end of the boat to keep away the worst of the wind chill. A few Double-crested Cormorants had crossed the bows and a couple of Rhinoceros Auklets were seen, but they kept their distance. The breeding season is over for them now and the spot above the bill lacked the tuft which inspired the name. To avoid being entirely non-descript, the white under-tail was just visible on one of them.

Is there such a thing as the Seattle Big Five, I wonder? Already I had seen a Stellar's Sea-LION and a RHINOCEROS Auklet. Do LEOPARD and ELEPHANT Seals occur here? I had BUFFALO mozzarella in a sandwich, but that may be stretching things a bit far.

Other species were present in low numbers, but I did manage to find a Short-billed Gull which is the American version of the Common (Mew) Gull. 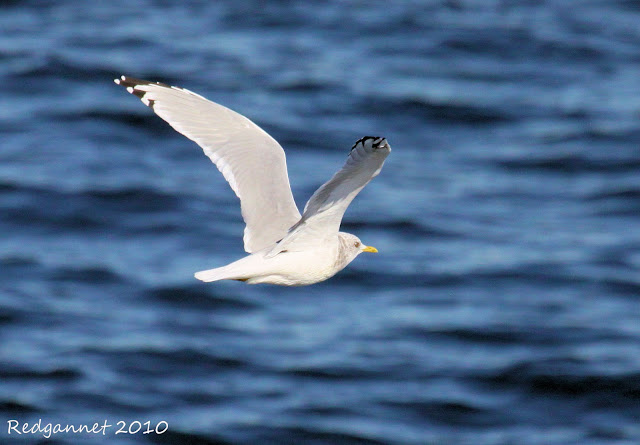 Once we entered the inlet, birds became more frequent with Pelagic Cormorants numerous, but widely spaced. Suddenly, the sun came out and it was as though a whole new day had dawned. From flat and grey, the view suddenly became vibrant and exciting. 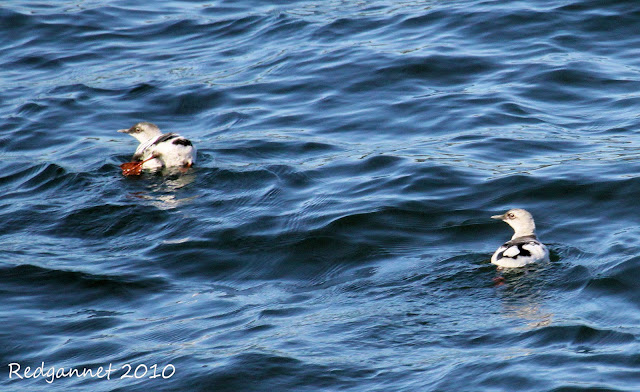 I had read somewhere that Marbled Murrelets may be seen from the ferry. As I reflected on this a group of four black and white plumaged birds came into view. I had a very quick look with my binoculars then turned to the camera for a more reliable memory. I had an inkling that they were a bit too big for the murrelet and the black markings seemed vague rather than solid. Another small flock hove into view followed by up to 40 in groups of 2, 3 and 4. I used the camera for preference so that I could refer back to the pictures later on, but when I saw that there were quite a few of them, I went back to the binoculars and realised that I was looking at Pigeon Guillemots. I had not seen them in non-breeding plumage before, but a flash of red in the water behind one of the birds reminded me of their vivid leg colour. 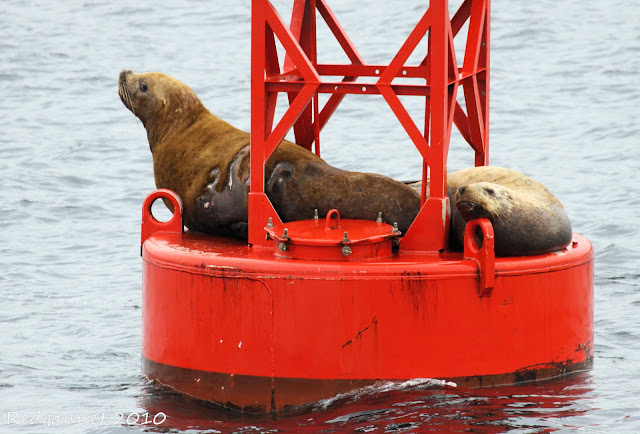 The stretch along the inlet was the most productive of the day with Eared Grebe, Western Grebe and a few gulls accompanying the ferry. Mammals were in evidence too with a Common Seal as well as more sea-lions on the bouy. 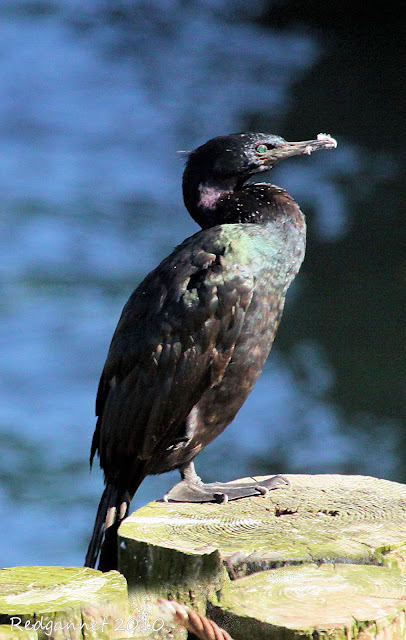 At the ferry dock an upright held a number of Pelagic Cormorants which flew off as we approached. I disembarked and found that the bus schedules did not fit well with my plans for Bremerton, so I turned round and got straight back on the ferry for the return. 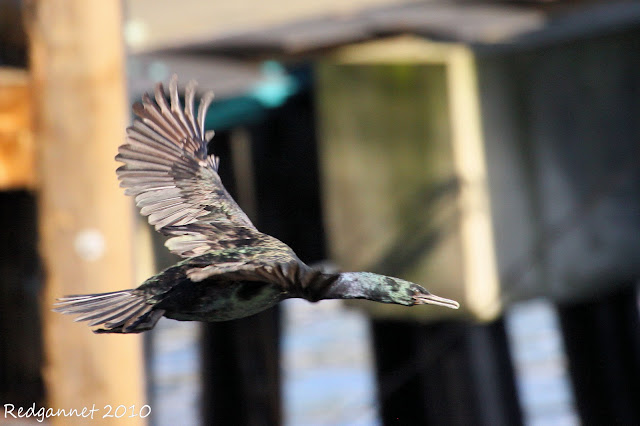 The day had become very pleasant now and the last remnants of snow and ice were visible on the peaks of the Olympic Mountains, but the shaded side of the ferry was still quite chilly.  I would certainly recommend a coat even in warm weather. 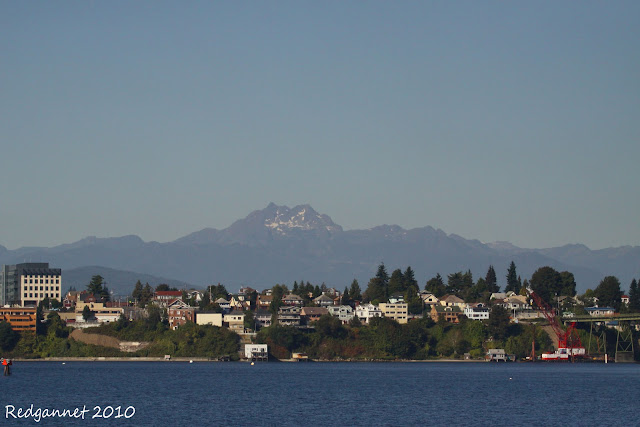 Two Surf Scoters flew way behind the boat.
Back in Seattle, I took a shot at this gull which may be a third year Thayer’s Gull? 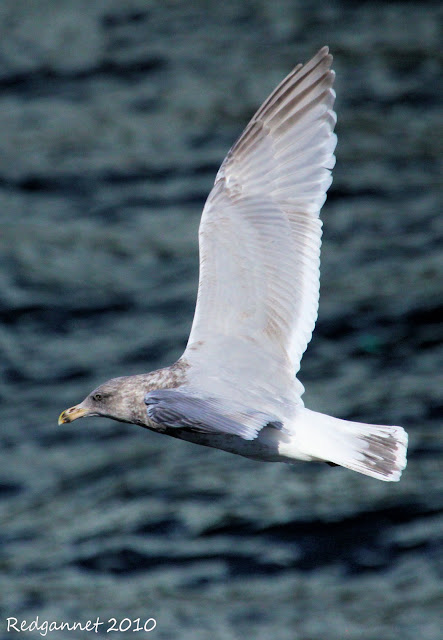 I visited “Ivars Acres of Clams” where diners are encouraged to feed the birds. As a result, the fence was lined with approachable gulls and the Fire Department next door had to use a sprinkler system to keep them off the equipment.
If you want to get a good look at gulls and to compare plumages of different age birds, this is the place to be. It is about half-way between the ferry terminal at Pier 52 and the Aquarium. 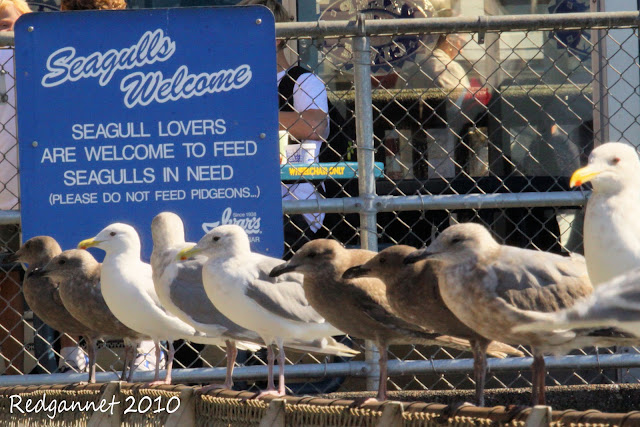 It is an entertaining practice, but I would be bound to mention that the toilet habits of the birds leave a residue on the tables which gull lovers are expected to accept. I would have thought that the birds would have been far more aggressive than they actually were, but they sat patiently on the fence or in the water just beyond. There was some begging, but no snatching. People obviously abide the rules here as there were no pidgeons expecting a free hand-out. 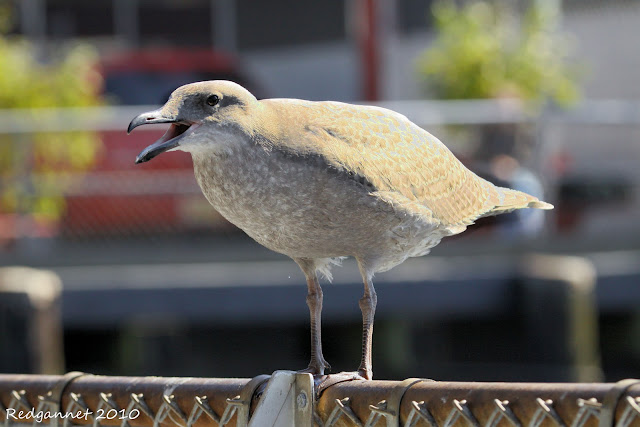 Bainbridge Island is the other destination served from Pier 52. Although it looks very pleasant and I am told that the cycling is good, the shorter ferry ride ends before the inlet is reached and most of the birds were seen beyond this point. 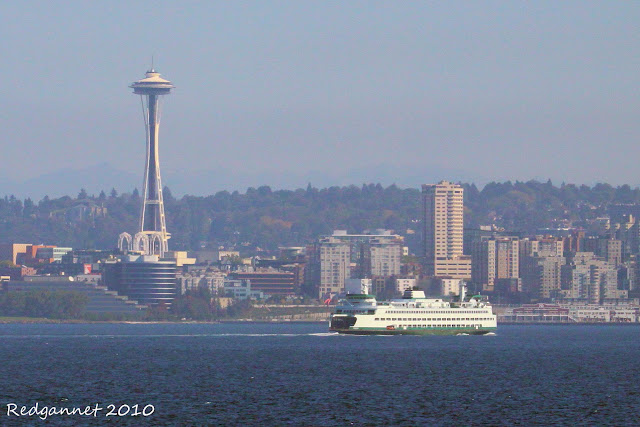 To present a full picture, I have also included the American Crows and a pair of Red-shouldered Hawks that I noted from the bus on the way back to the airport.
As if the gulls weren't bad enough, there are those who assert that most of the crows around Seattle are American Crows and that the Northwestern Crows are shy creatures of remote forest. David Allen Sibley, Roger Tory Peterson and those fine fellows of the National Geographic Society all agree that the distribution of the American Crow does not include Seattle, while the Northwestern's does. If I were to pitch my tent in one camp or the other, I would have to respect the expertise and dedication of these authors. Thus, Northwestern Crows.
However.. most Seattleans (?) would have it that the birds of the towns are American Crows and local knowledge should never be dismissed out of hand. Thus American Crows.

For other posts from Seattle, try the following links:

For other links to North America navigate to the page tab at the top.