Yellow is the new Purple

Yellow is the new purple. 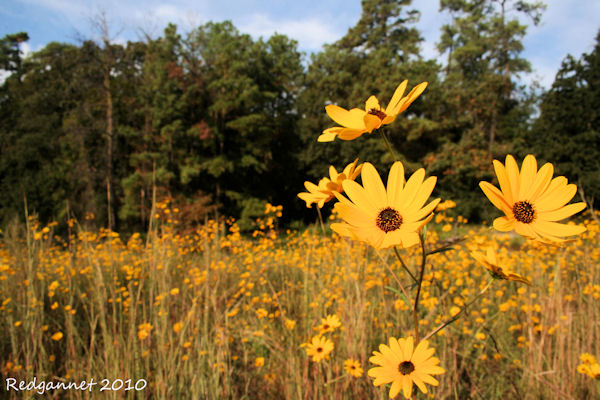 The meadow at Houston Arboretum and Nature Center was bedecked in purple when I visited last month. As late summer turns to fall, the fashion changes with it and outmoded purple has been replaced by yellow as the new couleur de la saison. 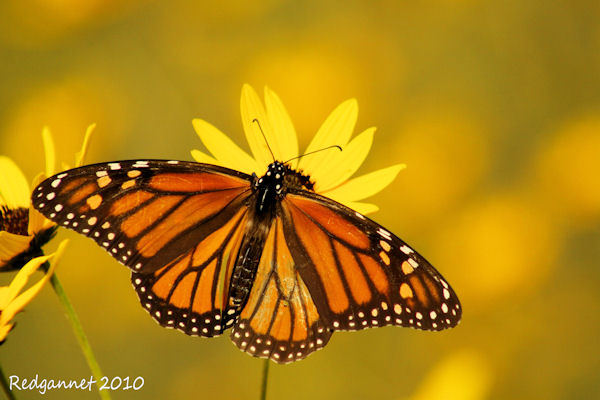 This post is written to add to the article from last month; http://redgannet.blogspot.com/2010/09/houston-arboretum-and-nature-center.html
It is still hot during the day, though much cooler now in the mornings. Butterflies were warmed up sufficiently by 09.30 to be feeding in the meadow and turtles were hauling-out from the pond to sun-charge themselves for the day. 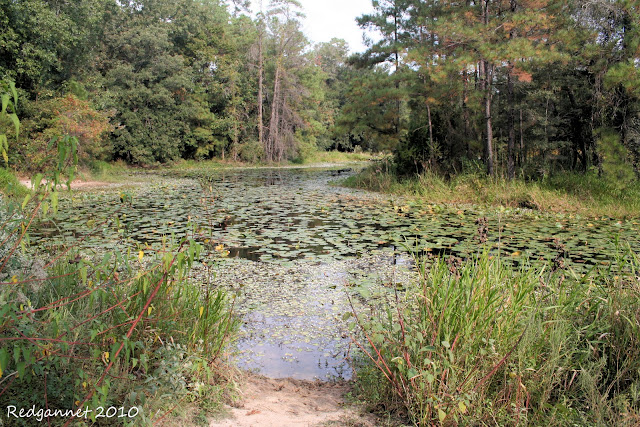 The forest had been sporadic this morning with the action coming in waves. The crests were busy parties of feeding birds which inevitably included Carolina Wrens. The troughs were quiet moments except for the wrens again. They gave a wide and varied performance today with a repertoire that kept me guessing for most of the morning. They are strident and exhuberant singers with an extensive range of phrases chatters and chuckles to entertain the aural birder. 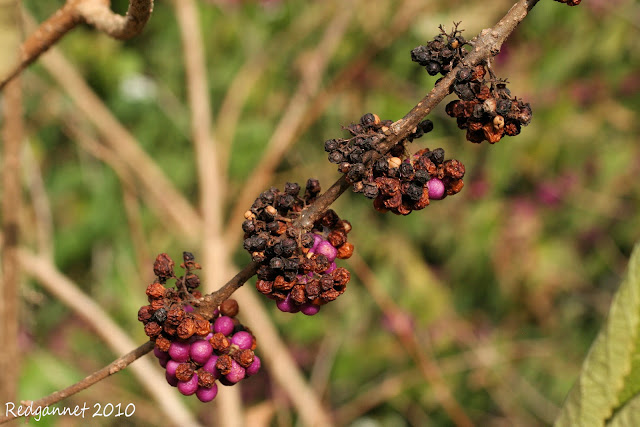 The American Beauty Berries that had been so abundant are withering on the bushes now. Some look as if they have been fed on by birds. If I had thought at the time, I should have looked more closely at them. A mockingbird coughed up a bright red seed and it would have been interesting to know if it had been feeding on the beauty berries. 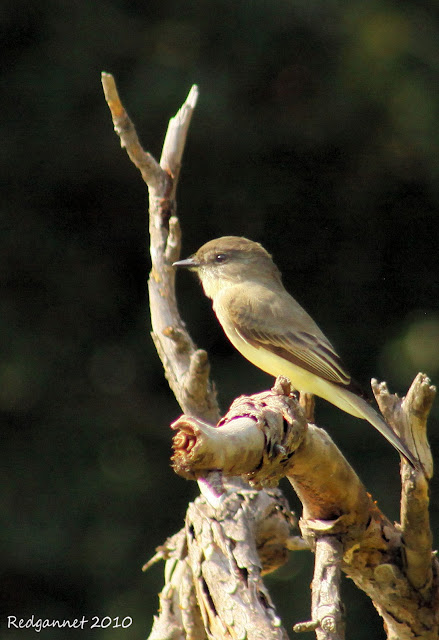 I took a couple of turns around the meadow and found an Eastern Phoebe on the second pass. I watched it hawking across the meadow and followed it to the pond where it posed on a fallen log. 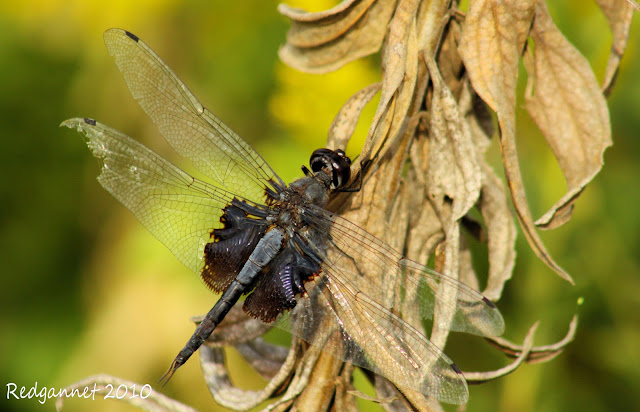 In the meantime, I had been looking for some dragonflies. I mentioned Black Saddlebags Tramea lacerata in my last post here, but today I can confirm it in red after getting an incontrovertible view when one settled close enough for a photograph.The couple below are a male (top) and female Blue Dasher Pachydiplax longipennis. 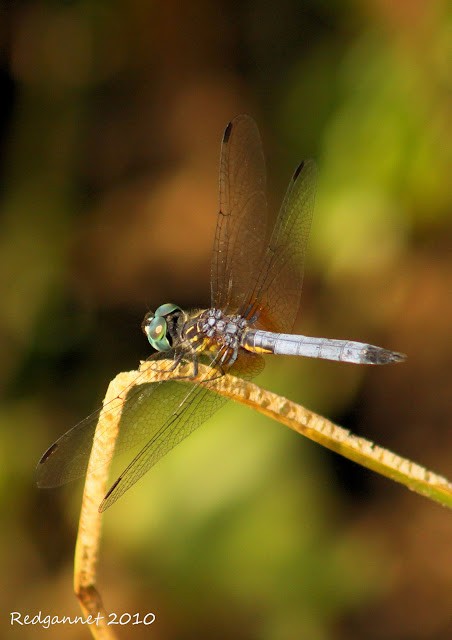 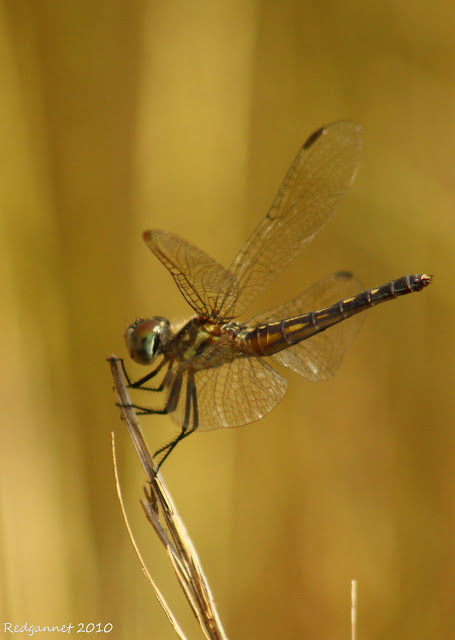 As the end of the odonata flying season approaches, tattered individuals like this one are making their last attempt to prolong their dynasties. He was a little shorter and slimmer than the dasher, with a dark face. I suspect that it may be a Little Blue Dragonlet Erythrodiplax miniscula. Males of this species develop a blue thorax to replace the brown of early adulthood. If anyone can confirm, please let me know, thanks. 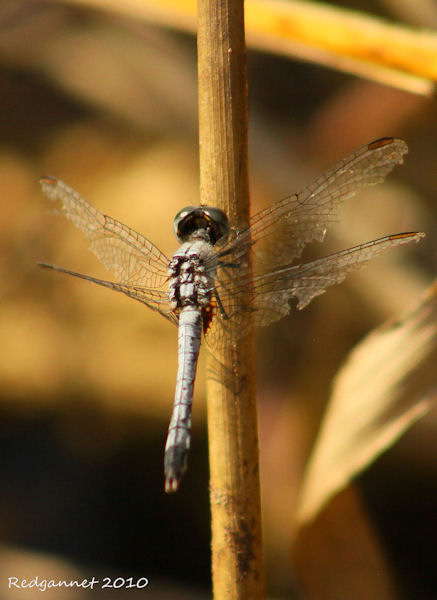 Blue Jays were noisy too. In the swamp area, they were persistently scolding a large female Cooper’s Hawk and succeeded in driving her away. Later, in the loblollies, they were screeching with fury at something on the ground. I was hoping that they might be warning of a snake, but I couldn’t see one. 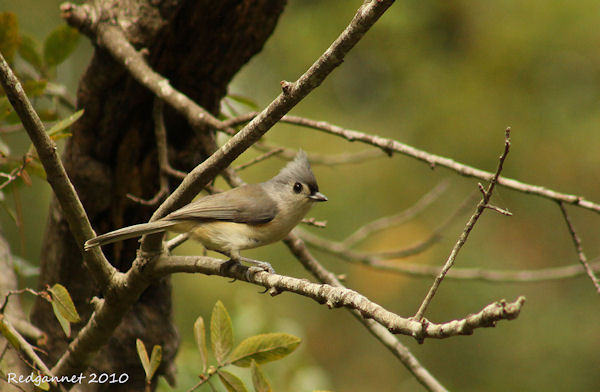 Tufted Titmice were more tuneful and the Carolina Chickadee calls were sufficiently higher and faster than their black-capped cousins to allow me to identify them before they came into view. This was a feat made much easier by being beyond the normal range of the Black-capped Chickadee.Woodpeckers were well represented today with three species, Red-bellied and Downy Woodpeckers and a Yellow-bellied Sapsucker, joining various mixed flocks.The biggest party contained many of the above as well as some Northern Cardinals, a Brown Thrasher, and a Northern Mockingbird. 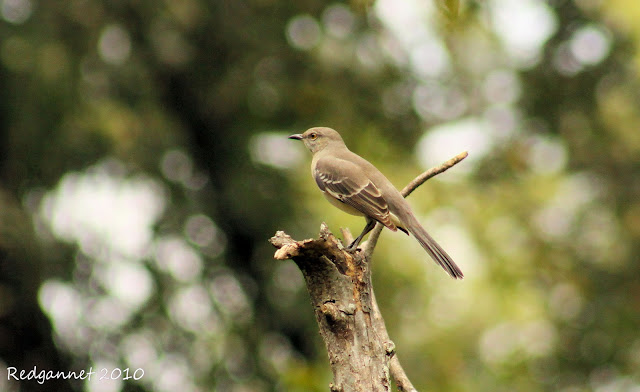 Weekends at Houston’s Memorial Park are extremely busy. There is a picnic area east from the arboretum along Memorial Drive. The forest is much thinner inside the looped access road. The birds are much easier to see and photograph here, but a Sunday morning brings out Houston picnickers like soap addicts to an Eastenders omnibus. The looped road is a favourite with cyclists on an astonishing range of velocipedal contraptions. Mix in runners training for the imminent Houston Marathon and you have good reason for staying in the much quieter arboretum. 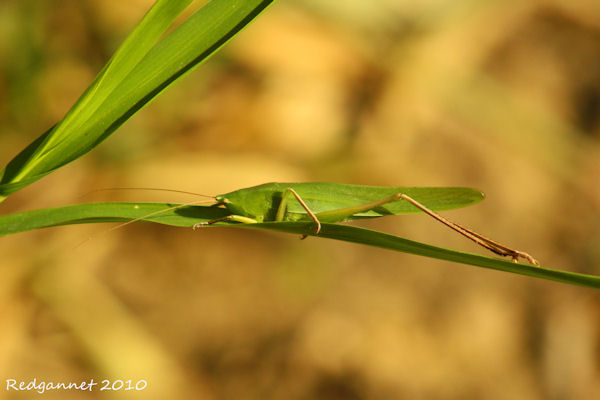 If any one has any ideas what this beauty, found beside the pond, might be, please do tell. The Brewer’s Blackbirds and Great-tailed Grackles were seen outside of the arboretum and are included to give as full a picture as possible of the ornithological potential of Houston in the middle of October.
Birds species; 19