You will notice a slight change in style during this post. Redgannet has been invited to play with the big boys in the big rooms.
This is my first post for the mega-blog, 10,000 Birds
I will keep the name Redgannet, but write as the International Birder of Mystery to maintain my anonymity
My wife claims that the only mystery in our house is where all the beer goes.
The text appears slightly differently in each post as I cut and pasted from Word into 10,000 Birds which had the same effect as dropping a smoke bomb in the control room of the evil genius's lair, so I re-wrote. 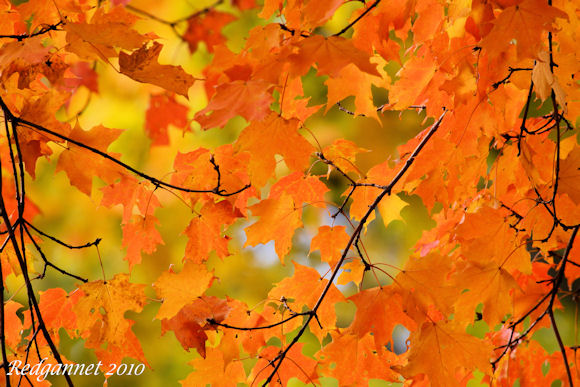 I had been specially selected for this operation.
“Redgannet? We need you”. (See?).The call had come in the early morning.

It was ‘S’, the faceless, humourless, head of the department that assigns agents to important missions.
“I promised I would send our best man,” she continued, “but he is already on a job. You will have to do.”
And so it was, I found myself jetting to Boston in the fall.
My mission objective was to experience the colours in New England during late October and to capture some of the spectacle on film. ‘Q’ from the technical gismos department had kitted me out with a fancy gadget that he called a polarising filter.
“It enhances colours and reduces glare,” he told me.
“Do be careful with it Gannet,” he continued. 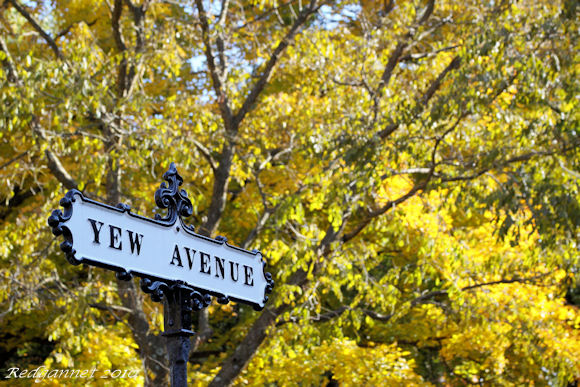 I left the hotel under cover of darkness and arrived at the target site shortly after sunrise. The gates to Mount Auburn caused me no problems. They were open and unguarded. Today, I had chosen subtle shades of brown instead of my customary disrupted green camouflage. I slipped through the gates and melted into the background. 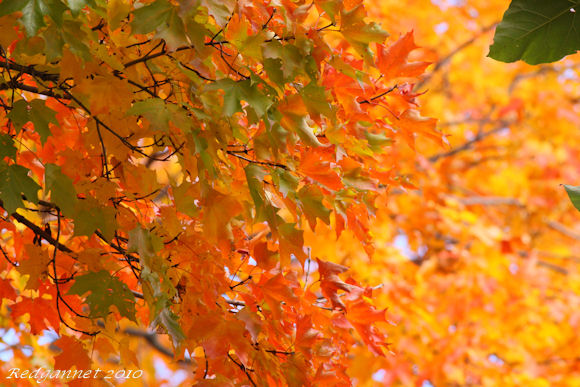 American Robins were noisy and obvious, but shy and kept their distance. Their red breasts looked splendid as a complement to the foliage. Blue Jays contrasted sharply with the autumn colours and would have made a superb photograph.
I found myself wishing that ‘Q’ had been able to get the big lens ready in time, but I was working with wide angle lenses today with emphasis on foliage pictures rather than birds. 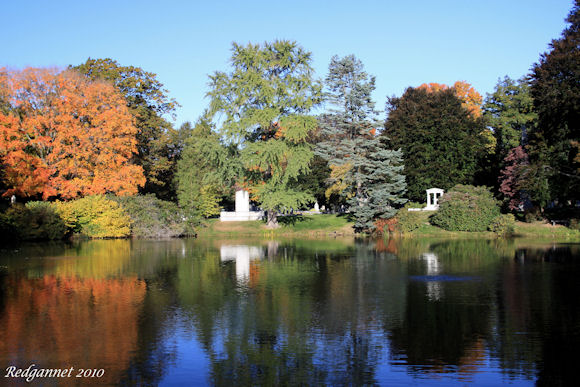 Halcyon Lake looked stunning. Tufted Titmice and White-crowned Sparrows frequented the low bushes here as I tried to do justice to the magnificent vista. 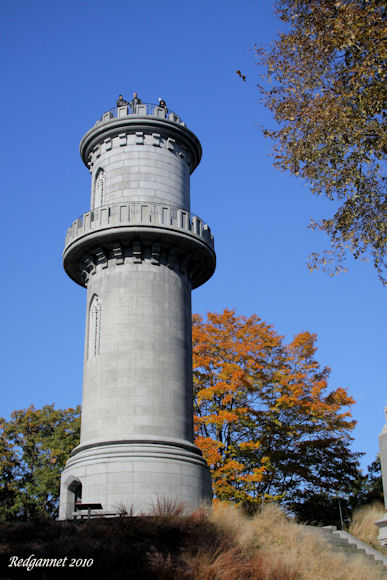 The brief for this assignment had made no mention of any inter-agency co-operation. My usual contact was on a mission of his own this week, so who was the guy with the tripod mounted, 500mm outfit? CIA (Canon Inspired American)? Perhaps he had some information. His codename was Phil and he was FBI (Flickr Based Informant). His valuable local knowledge set me on my way to the tower on the highest point around. From here, a 360 view took in the whole of the cemetery, Harvard and Boston in the distance. 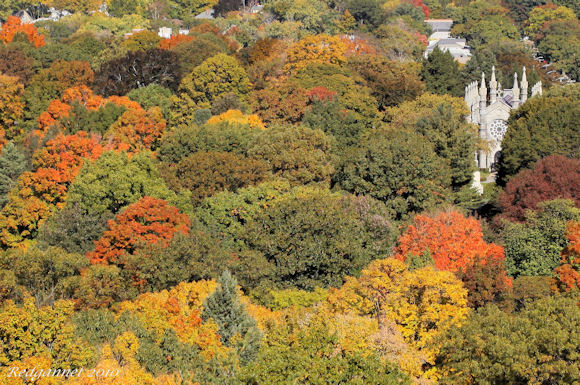 The Charles River was visible from here too. ‘W’ is in charge of running feints, decoys and distractions. He had done a great job in organising a huge regatta to ensure that the cemetery was dead quiet today and that my reconnaissance could be conducted without disturbance.
I ran into Phil again later on and in the spirit of cross-border relations, he lent me a trinket from the technical array in the trunk of his car. A fixed 400mm f4. His network of spies in the cemetery, in this instance, his wife Jen, had news of a young Red-tailed Hawk close to the gates. Phil bundled me into the car and off we sped. 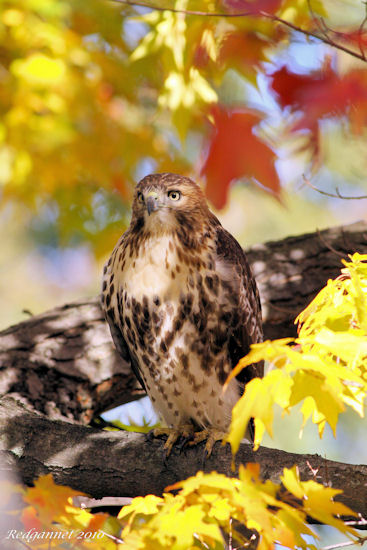 The hawk is the survivor of two that fledged from a nest within the cemetery. It was very approachable and drew quite a crowd. Phil, Jen and I moved on, passing the feeder at the end of Auburn Lake. Black-capped Chickadees and American Goldfinches were feeding here. On the lake, a female Wood Duck tried to look inconspicuous among the Mallards.
A White-breasted Nuthatch was feeding in an evergreen nearby. 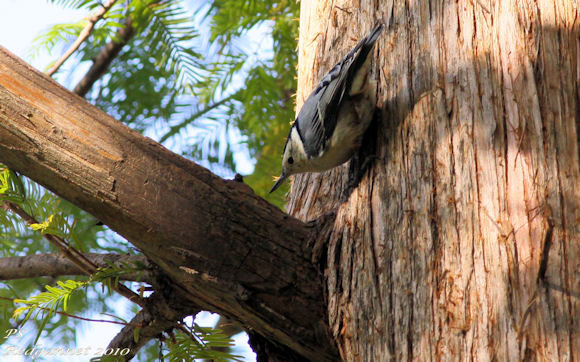 Ever alert and vigilant, the flash of a brown, low slung creature dashing for cover caught my eye. It was a Woodchuck and deserving of the red crayon as the first one I have ever seen. 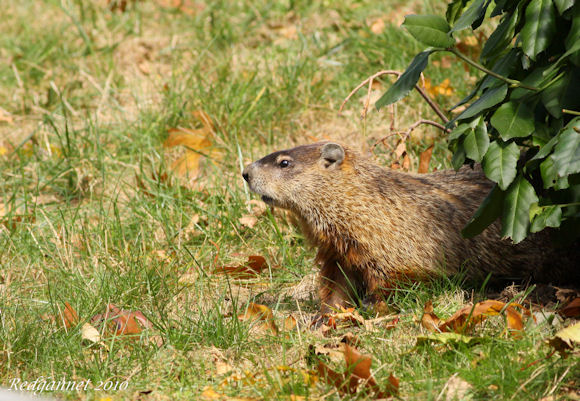 We had arrived at a rendezvous point where all the informants meet up to share news. It was close to an evergreen bush which had been very productive of late. Blackpoll Warblers love the red berries from this bush and were showing well. 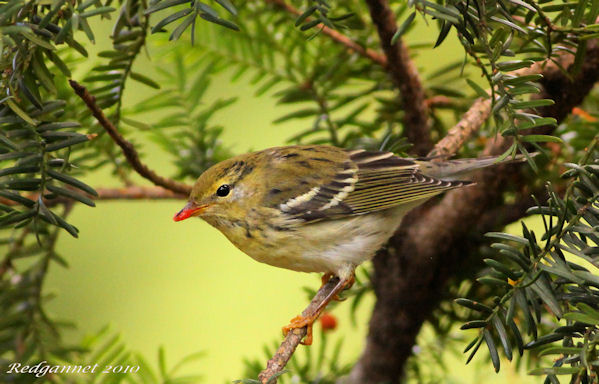 Other informants were gathering. John writes a diary blog of the cemetery and its wildlife in all seasons. Al is a security guard and designated spotter. He provides tip offs of any interesting action that he comes across on his rounds. 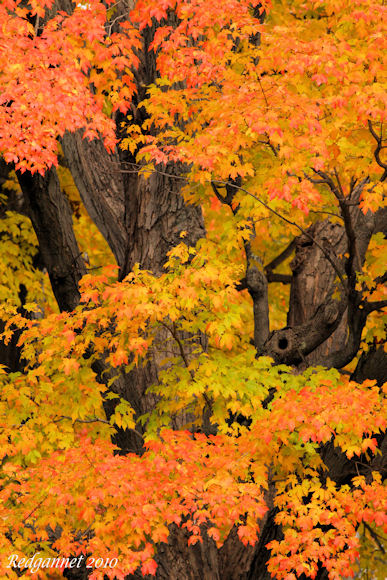 The cemetery had shown me its treasures and I had met a few contacts for the next time that I visit. All in all it had been a good day.
I would guess that many of the trees will continue to change and look spectaular through into November. But hurry, you wouldn't want to miss it.
My mission was accomplished and I must acknowledge Phil’s contribution to its success. Without the assistance of his technical department and the loan of his lens, the post would have been devoid of any bird pictures, which would have been a terrible shame in a bird blog article. I hope that if Phil’s agency ever sends him on an operation to the UK, I will be able to repay his trust and generosity. He seemed very pleased to have pictures of Blackpoll Warblers that slobber and drool, so this one is for you Phil. Thank you. 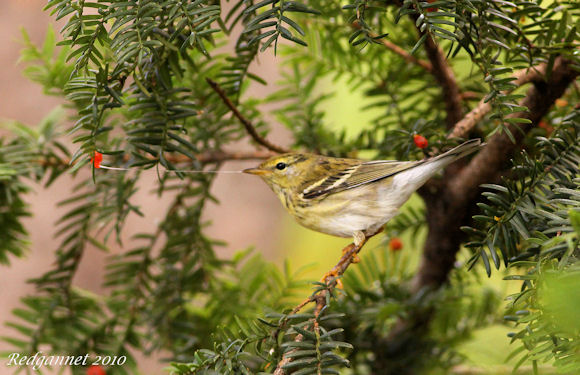 ‘Q’ is on the case and working hard to repair the big lens in time for my next assignment. I don’t know where that will be yet, but that is the fun of the job.
Redgannet out.

For those readers who don’t have the benefit of ‘Autumn Watch’, the BBC programme that documents British wildlife through the ’season of mists and mellow fruitfulness’, here is a taste of the kind of thing you are missing, though I am paraphrasing.


Leaves have a number of pigments that colour them, but they are over-powered by the abundance of chloropyhll during the spring and summer and thus appear green. As autumn approaches and the days shorten, the chlorophyll production slows from lack of light and the other pigments are given their moment in the sun, so to speak. Raised sugar levels stimulate anthocyanins to produce the red colours and carotenoid pigments in their turn give us yellow leaves. The yellow carotenoids can be over-powered by the red anthocyanins, but when they are present in similar quantities a leaf may show as orange.

Leaves are severed from the tree by means of a process called abcission. The nutrients in the leaves are reclaimed by the tree before special layers of cells in the abcission zone at the base of each stem, seal off the leaf and begin to disintegrate. (Suck ‘em and shed ‘em)

The leaf drop in autumn or fall is the tree’s chance to excrete waste. Toxins build up in the leaves and are excreted when the tree sheds them. Leaves therefore have 3 purposes beyond looking beautiful. They feed and water trees as well as being the agents for waste disposal. They are excretophores and have the ability to remove toxins from polluted ground.

A link to the previous Mount Auburn post with details and directions is below; http://redgannet.blogspot.com/2010/09/boston-back-bay-fens-and-mount-auburn.html

Visit the dedicated page for posts from various locations in USA and Canada
Posted by Redgannet at 12:23