This post was originally published on the now dormant http://www.redgannetsdragonflies.blogspot.com/ on 3rd November 2009. It has been transferred in to simplify linking.

Temperatures reached an unseasonal 85+ today during a trip to Miami. Calm air and easy access to Snapper Creek made choice of activities a formality.
I had visited Snapper Creek a few weeks ago and bought a new camera at the Best Buy, adjacent to the river and taken a memorable piture of a Halloween Pennant. Today with yet another new camera, the Canon 50D, I was hoping to recreate that success.

As I approached the river, I noticed a Great Egret and 2 White Ibis close to the water's edge. A pair of large iguanas were moving towards the sunlit grass.
Snapper Creek is approx 8 meters wide at this point and has 2 or 3 meters of grass on both banks. The margins have grass and a few other emergent plants. In some spots, mats of weed cling close to the banks. The water is very clear and has a good flow. There are many fish, some quite sizeable.
The first ode was seen from the Northern bank right beside the bridge at Dadelands North Metrorail station. 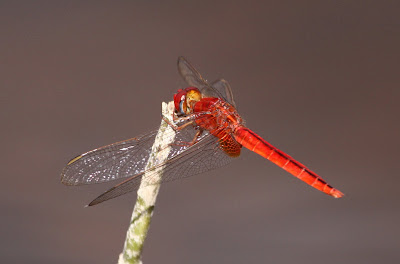 It was a Scarlet Skimmer, Crocothemis servilia. This dragonfly has appeared in the blog before and today takes the crown for the most widespread ode that this blogger has seen. First seen in Singapore, it has subsequently been found in Hong Kong, where it goes by the name of Crimson Darter, and in India during October.
The website Odonata Central has very little to say about this species, which I found surprising for such an apparently abundant and dramatic-looking creature. This leads me to wonder if it has been introduced or escaped along with the iguanas and the parrots. Despite it's uncertain provenance, it is quite approachable and sits well for pictures. 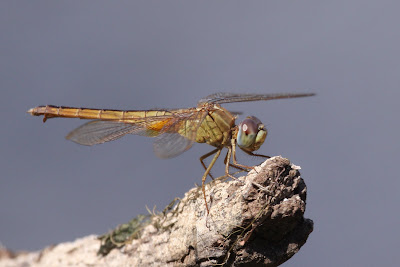 Without any evidence to the contrary, I am assuming this to be the female.
Next was the tiny, Spot-tailed Dasher. 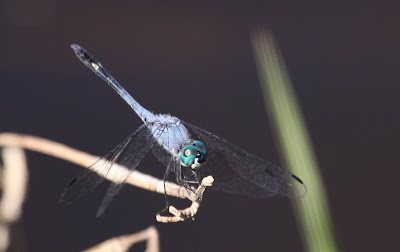 Another seemingly abundant species, which also fails to make it into the "Beginner's Guide to Dragonflies", which I am currently using as my reference field-guide.
The little dasher was then displaced by the much larger, Blue Dasher. 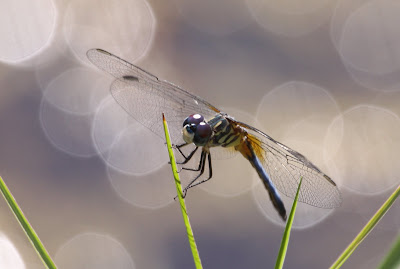 The Blue Dasher was the original holder of the distribution title having been seen from Toronto, Canada to Califonia.

Then came the dragonfly which had been at the back of my mind when I had chosen to come to Snapper Creek. I had taken a picture of it for the previous Miami post, but it had not been sufficiently detailed to allow me to properly identify it. 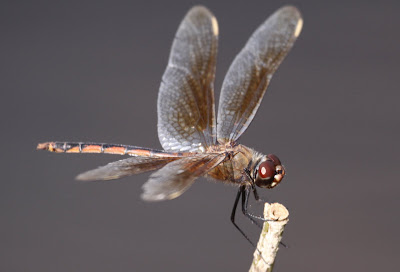 I doff my hat to Warwick and Michele Tarboten for this next photo. I would not have even considered taking a shot, were it not for the photo on the back cover of their "A Fieldguide to the Damselflies of South Africa". Now, if ever you are considering writing an Odonata fieldguide, may I suggest this as a standard to which you should aspire. 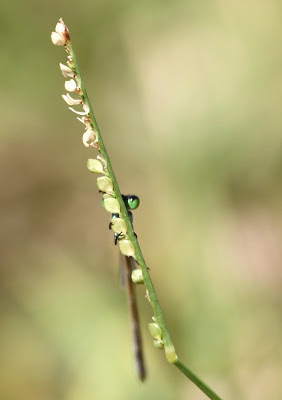 I believe it to be a Rambur's Forktail. This species is mentioned by the beginner's guide, but when you do not have the full set for comparison, how can a definitive identification be made? 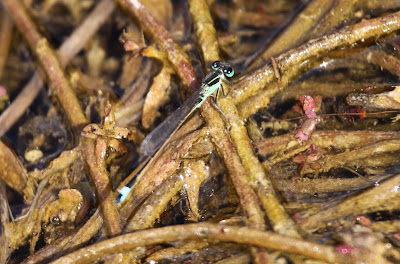 And so to the one that got away. This was my best picture of the day which makes it frustrating not to get a positive ID. My suspicions lead me towards a female Eastern Amberwing. 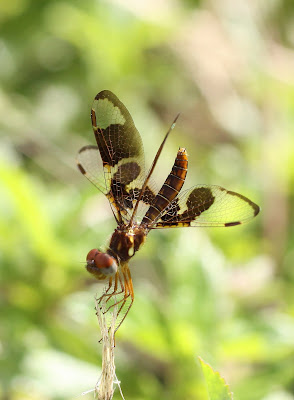 It was about the right size and the abdomen is suggestive of amberwing. The eyes and the yellow marks on the thorax fit the descriptions of the amberwing. The wings however made me doubt the accuracy of my assumptions. The creature left it's wings to flutter in the light breeze in the same way that I had seen the Halloween Pennant doing on my previous visit. The wings were also much more heavily marked than I have seen in any photos or illustrations. There were both Eastern Amberwings and Halloween Pennants in the vicinity to compare size and flutteriness with. I see that the amberwings sometimes imitate wasps, but the fluttering did not seem reminiscent of any wasp that I had seen before. So I find myself unsatisfied with Eastern Amberwing. Perhaps there is a tiny pennant that I have not found in my research yet. All thoughts are welcome.