I am tending towards the thought that I must be the only British bird watcher without a tick beside Bohemian Waxwing. Four people of my acquaintance (I hesitate to use the word ‘friends’ for lack of a timely phone call or text), have been able to watch flocks of Bombycillae in their own gardens (within easy reach of a telephone)! The irruption has been very impressive this winter, but as spring approaches, I fear that I have missed out. So it was with interest that I read a blog account of, not just Bohemian, but also Japanese Waxwings in Beijing (Peking). A picture of a mixed flock was a delight to behold and gave me the jolt that I needed to make use of a free afternoon in China. 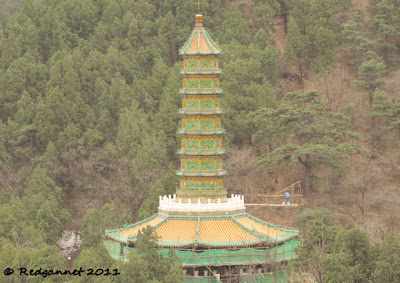 The schedule for this trip is not conducive to doing much. After a long flight, we reached the hotel at midday and would return early the next morning. The weather was poor with dreadful light and drizzle. Only the thought of two waxwings in one hit provided enough motivation for this jet-lagged flight attendant to venture out and explore.
It was almost 13.00 by the time I reached the Fragrant Hills. An entrance fee of Huan 10 saw me through the gate where I turned right and followed the paths that meander through the lower gardens. 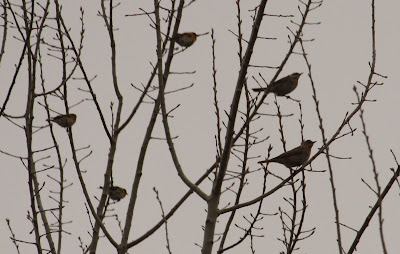 My tip for birding in Beijing is to make yourself familiar with the sparrows and magpies to avoid being constantly distracted by them. Eurasian and Azure-winged Magpies were noisy and obvious; Eurasian Tree Sparrows were even more abundant. A drumming Great Spotted Woodpecker drew me into a stand of trees where a small flock of thrushes evaded identification in the stygian gloom. If anyone would care to venture an opinion, I would be pleased. Especially if your opinion leads me to Dark-throated Thrush (but they were probably Dusky)! 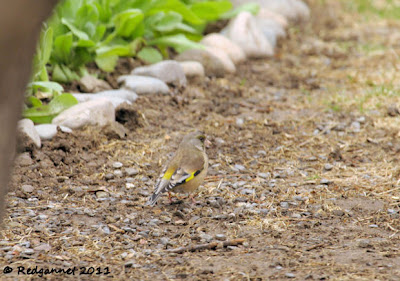 A moment’s excitement at seeing a Grey-capped Greenfinch was short-lived when I realised that it was an Oriental Greenfinch using an alias. I tweaked the overexpose setting to get any kind of picture, but could do nothing about the high, silhouetted birds.
A flock of small birds flew in and settled in the top of a leafless tree. Normally Bramblings have enough colour to make them stand out, but even at just past lunch-time, the light was so appalling that I did not recognise them in the photo when I got home. A small tit could have been either Willow or Marsh. The voice might have been decisive if I had recognised it, but after seeking advice, it seems that it was most likely to have been a Marsh Tit.
By following the signs through the lower gardens to Spectacles Lake, I found myself at the bottom of a chair-lift. G.L. (may all the saints bless him) had suggested that I take the cable car to the summit and walk back down. Note the use of “cable car” in G’s suggestion, which gives the impression of an enclosed, warm, comfortable conveyance. 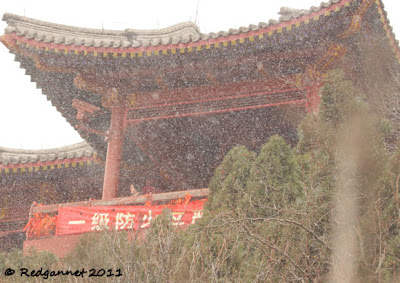 It was a ski-type chair-lift, open to the elements which were currently raining down on me. He also forgot to mention that the lift ascended 400meters vertical height to Xianglu Peak. At the top it was snowing and G’s idea (may he burn in seven kinds of Hell), had lost all of its appeal. 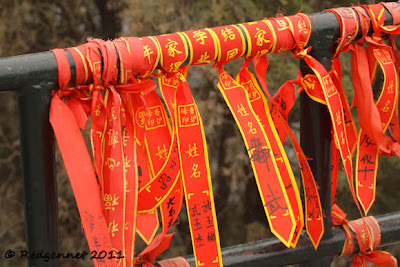 I was astonished to watch locals scaling the hillside as I took the lazy way up, but noticed what I guessed to be votive tokens at the summit. I surmise that the climb is made as a pilgrimage of some sort. The air was regularly split by cries of anguish as the legs weakened, or perhaps they were shouts of self-motivation to complete the undertaking. 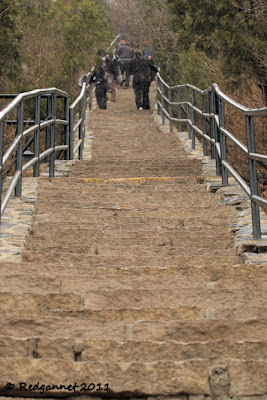 The precipitous, uneven steps leading down would be perilous at the best of times. In snow, they were treacherous, but I needed to descend as the rain caught in the cups of my binoculars was freezing over and the wind was blowing sleet into my eyes. I was halfway down before any kind of bird watching was possible. Much of the hillside is covered by scrubby bushes which on this first day of April were still bare, but the peach and almond trees were wearing pink and white blossom in anticipation of spring. A Daurian Redstart, his red tail vibrating, picked between the bases of the bare bushes. 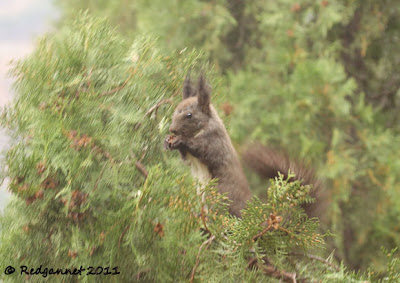 The magpies and sparrows were still abundant, but I had learned to ignore them and happily did so in favour of a black squirrel feeding in a small evergreen by the path. I would love to know his name if anyone can tell me. A Goldcrest called from the adjacent conifer. Through the stand of conifers, the path levelled out for a few pleasant moments. A male and female Red-flanked Bluetail skulked in a patch of bushes in the evergreen area. 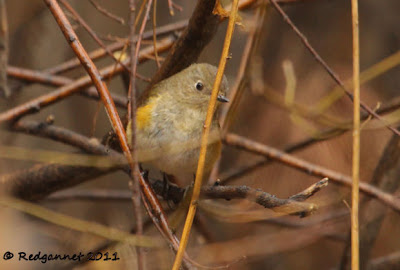 Soon I reached the lower slopes and found myself at ‘Lotus View’ which used to comprise of viewing towers until 1860 when they were destroyed by the Anglo-French joint forces. A villa stands there now. Great Tits showed briefly with a Meadow Bunting. Oriental Turtle Doves were calling with a coarse tone that did not match the “melodious” description in the field guide. Lotus View would be easy to reach on foot without recourse to the chair-lift and I only saw 2 species above here that I didn’t see elsewhere. 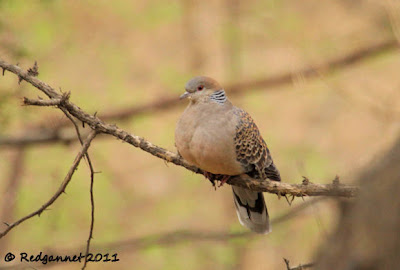 Now that I had returned to the bottom of the hill, I realised that I had not seen any fruit or berry trees that might have attracted waxwings. By April, I am sure that most of the berries would have been eaten or would be giving way to new growth, so the birds that feed on them during the winter would be moving on and that my chance to see the waxwings here had passed also.

I was cold and wet, my gear was soaked and my lenses were fogging up. I decided to call it a day.

As I passed through the gate a flock of birds flew across the small square and into the bare crown of a tree on the other side. I took a look through my binoculars out of habit more than anything else. Crests! They had crests! Waxwings, a hundred plus, but which ones? The light had not improved all day and I was unable to see any colour at the end of the tail. Bohemians would have had yellow tips, while Japanese sport a red terminal band, but it was simply impossible to pick out any detail. This was not how I had hoped my first picture of a Waxwing would turn out! 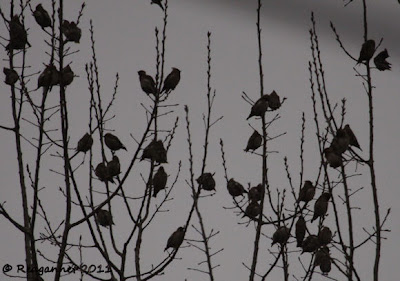 I tried to get closer, but they were in a tree beyond a wall with no access to get any closer. I tried to adjust my angle to make the best use of the available light. Some birds had shaggy crests and light patches visible on the wings by which I was at last able to identify them as Bohemian Waxwings. But what of those without light patches? I took photos with the intention of brightening, super-zooming and colour-enhancing. I managed to get the tiniest hint of yellow on a few, but more than half of them still remain a toss-up.

Thank you to Terry Townsend for the inspiring picture of the mixed flock of waxwings, for his reply to an RFI and his thoughts on tits. Thank you also to Birding Pals Jianqiang Li and Lijin Zeng for putting me on the right route for info.

Fragrant Hills will soon be connected to the city when the new subway station opens there. Since that was unlikely to be completed by this afternoon, I selected the taxi option which took 30 minutes and cost Huan 85 (@9.5 = £1). The park is about 10 kms beyond the Summer Palace in the northwest of the city. The journey will take you past the Botanical Gardens which are within walking distance of the entrance Gate to Fragrant Hills. From the hotel (by the north-east section of Beijing’s 3rd ring road), it can take much longer than half an hour, depending on traffic. It took an hour for the return journey. The subway will take approx 50 minutes when complete and involve two changes of train. The chair-lift ride cost Huan 50.