My friend Martin and I, with Ben and Joe, our 2 respective sons, are on Skomer, an island off the Pembrokeshire coast in south-west Wales. Ostensibly, we are here to go bird watching, but there does seem to be a lot of cricket going on. This is day 2. Day 1 is below (because the most recent posts are at the top of the page). Links to the other days can be found at the bottom of the page. 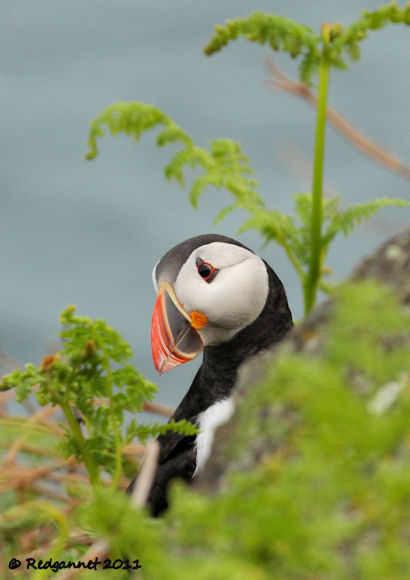 Martin and I let the boys have a lie-in this morning and visited a hide close to the Old Farm, overlooking North Valley. We were hoping to see the Short-eared Owl which regularly hunts this area. The hide looks out onto a small dam. Here there were plenty of gulls and a few duck; Mallard and Northern Shoveler. A Common Moorhen made an addition to our island list, but the owl did not show. The bushes and brambles in the lee of a rocky outcrop behind the accommodation held more Willow Warblers and some Blackcap. 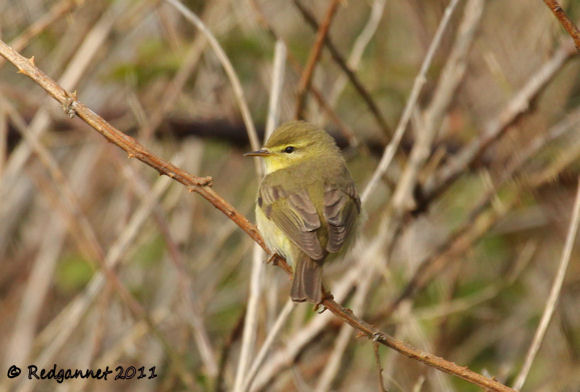 Once the boys were up, breakfasted and the obligatory game of cricket had been played, we headed for the landing stage to start a clockwise walk along the island’s edge to The Wick, via Captain Kites and High Cliff. We had come back to the landing point in North Haven to get a close look at the Common Guillemots and Razorbills that had been there to greet us on our arrival. The best view would have been from the boat, but we were still able to see them well from the steps. 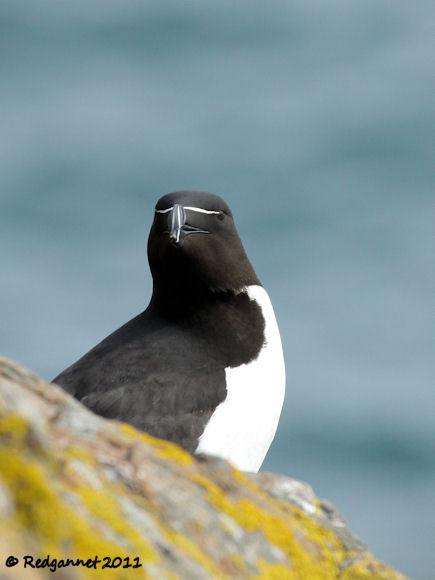 My son wandered off to the beach and befriended a curious Grey Seal which he named Big Nose. The island predominantly meets the sea as cliffs. This is the only accessible beach, though not what my wife would have in mind for a day out. There were large boulders, slippery seaweed and a cave which a little boy found irresistible. 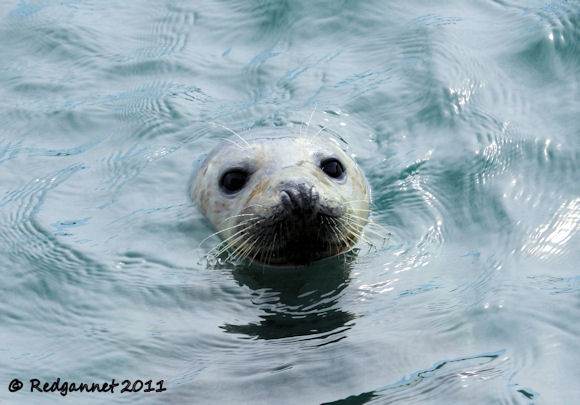 We followed the island trail to Captain Kites and beyond into the South Stream Valley. Here we were sheltered from the wind which had come up this morning. Small bushes along the stream contained the expected Willow Warblers as well as a couple of Northern Wrens.
High Cliff is home to a mixed breeding colony of Guillemots, Razorbills and Northern Fulmars. It gave me another opportunity to get the Fulmar picture, but I was still not happy with the results. There were a lot of Alcids down on the water and the Guillemots seemed to be playing ‘Follow my Leader’. The wind was biting so we stopped in the lee of some rocks and spent a little father/son time as the Ravens passed by and the Great Cormorants crossed to the other side of Mew Rock. 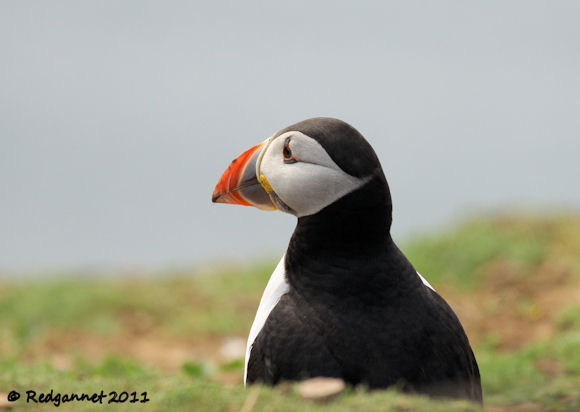 We had now come back to The Wick where the Atlantic Puffins had been so accommodating yesterday. Today there were fewer birds on the grassy slope. Maybe they preferred to shelter from the wind. The ones that were up were as approachable as before, but we had plans to visit the Puffins at North Haven later, so we didn’t linger. 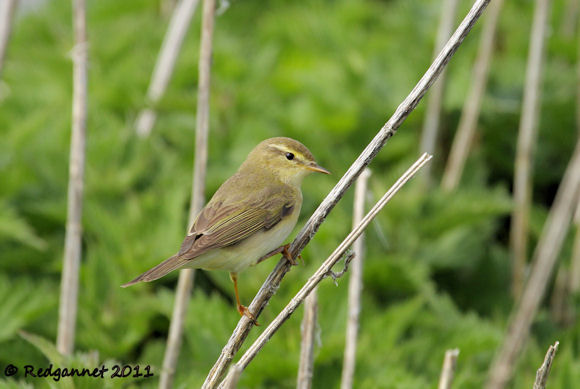 My son’s initial enthusiasm was wearing thin so the boys went ahead to the Old Farm while Martin and I stopped at Maury Mere hide on the way back. There were better numbers of Herring Gull here and as usual, wherever there are small bushes, there were warblers. Willow Warblers of course made up the biggest percentage, but there were Blackcaps and Common Whitethroat here too. 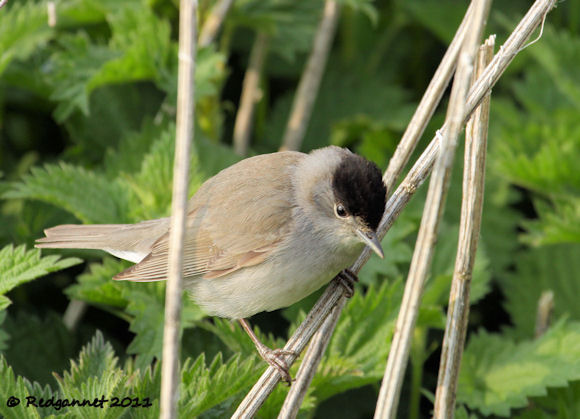 After dinner, we made our way back to North Haven to see the Puffins coming back to shore. Out on the water were hundreds of them with a few already landed, or looking out to sea for their mates. I had no idea that they fly so fast! There must be a formula to calculate the relationship between wing size and airspeed. The Puffins’ wings are quite small and their body quite stocky, so they have to flap like mad. Their flight seems to depend more on momentum and ballistics than elegant aviation. Getting a picture was really difficult. 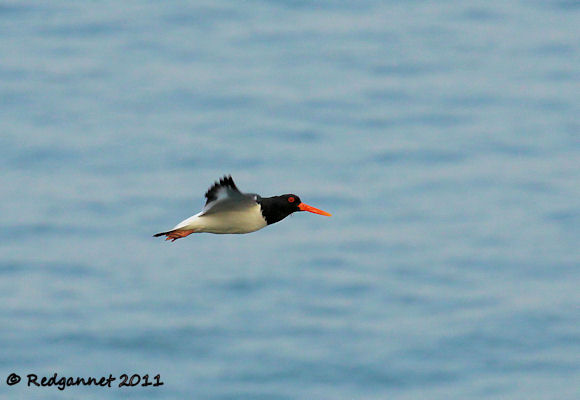 At one point I thought that I had nailed it when a slower bird came by.
I had pictured the scenario of a puffin coming in to land, flaring as it did so and I would be there to capture it on my 8GB Compact Flash. The reality was somewhat different with me having to delete most of the card because there were no puffins in the pictures. I simply couldn’t keep up with them and the servo focus was struggling to cope when I did. 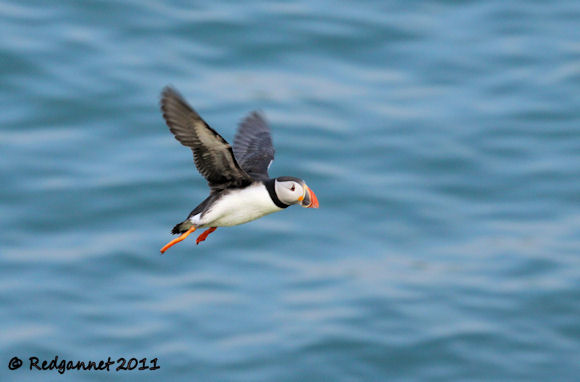 After a good long while, I began to pick out the birds at a distance and predict which ones would swerve around and cross in front of me and was able to get them in frame and in focus before the critical pass. 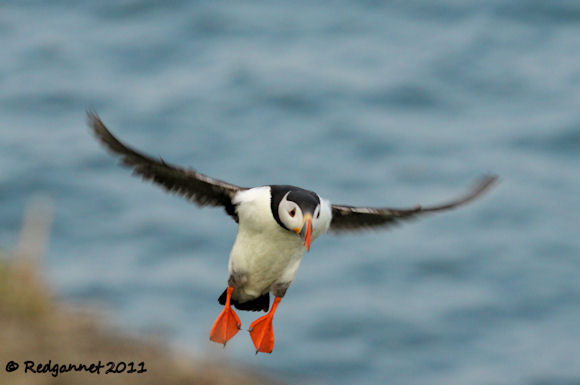 Then eventually one came to land just in front of me as I had envisaged. It didn’t so much land as impact and scuttled off into its burrow straight away. 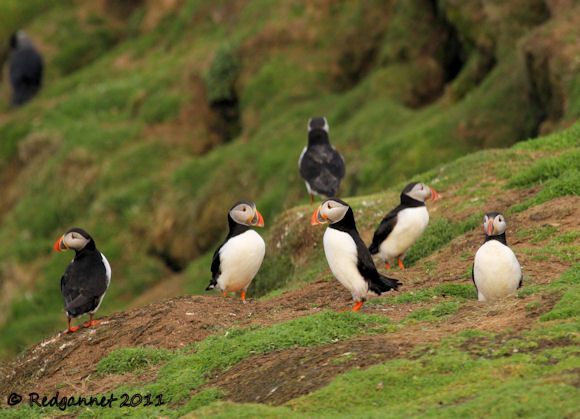 Up by the Warden’s House we waited for the bird log to start as more and more Puffins arrived and stood outside their burrows on the grassy slopes at the top of the cliffs.
The walk home was in the dark. We had conspired that this should be so because we wanted to see the Manx Shearwaters that remain hidden in their burrows underground all day or are out at sea feeding. Skomer is home to the largest breeding colony with as much as one third of the world’s population of the species. 120,000 breed on Skomer and 45,000 on its sister island Skokholm. The moon had been full the night before and we were worried that they might not come out. They are predated on by the large gulls and the light from a big moon enables the gulls to hunt at night. 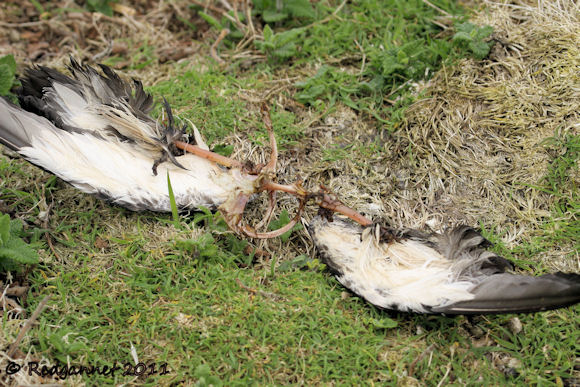 However the moon had not yet risen and we could hear the murmurings and strange eerie calls from underground as the birds called to their mates. Soon we began seeing them as ghostly flashes in the torchlight and then as ungainly, stumbling birds on the ground. Their legs are set well back on their bodies and are not much use for walking with. 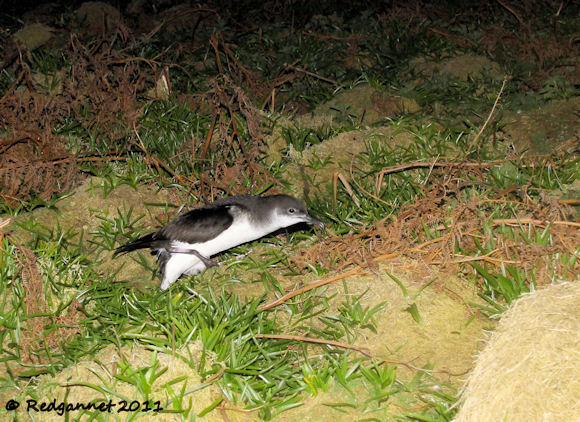 There is a recommendation that each bird should not have its picture taken with a flash more than once to avoid repeatedly dazzling it. 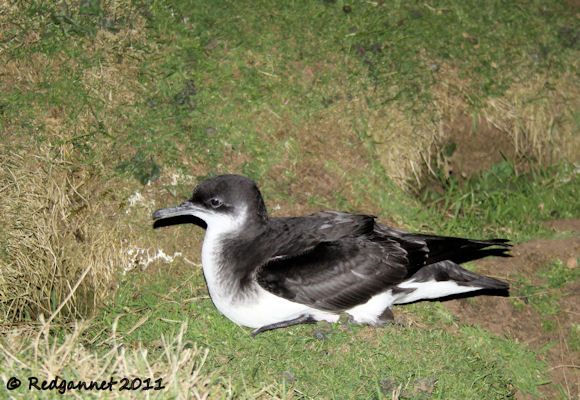 Some people choose their friends because they share beliefs and convictions, some find comfort in a friend who is thoughtful and reliable. I choose friends who have night-vision systems. In the ghostly green glow of Martin's monocular the birds could be seen in the beam of infra red light without disturbing them with torches. But then the moon came up from behind a rock! 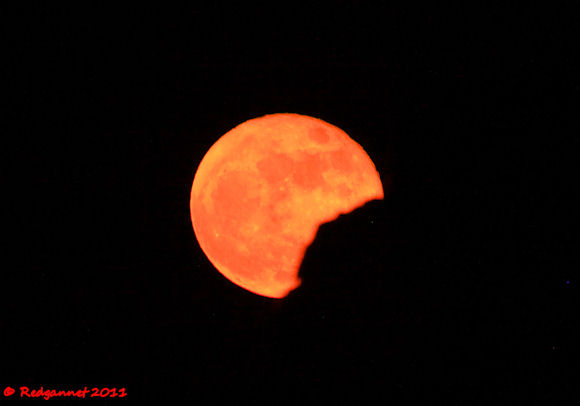 The Wildlife Trust of South and West Wales have built a terrific website with tons of information, maps and logistics for anyone wishing to visit Skomer. I would draw your attention to one detail which deserves highlighting. The boat does not ferry visitors to and from the island on Mondays. If you turn up on a Monday, you will have to be satisfied with a circumnavigation of Skomer and its neighbouring islands. This also means that visitors staying overnight on Sunday will have to stay the extra night until Tuesday (Incidentally, the ‘first come first serve’ policy on the ferry left a few disgruntled passengers having to wait for the next sailing, though overnight guests take precedence over day-trippers).
The boat only runs during the season between April 1st and October 31st.

Day 1, Day 3 and Day 4 can be found at these respective links.