Four of us, my friend Martin with his 10-year-old third son Ben, my 11-year-old only son Joseph and I, were off to an island off the Pembrokeshire coast in south-west Wales. Skomer is famous for hosting the World's largest colony of breeding Manx Shearwaters and for giving sanctuary to a host of other approachable seabirds. There will be galleries. We stayed for 3 nights and there is a seperate post for each day. Links to the other days are at the bottom of the page.
There is no permanent resident on the island, but a Warden's House at North Haven and the Old Farm in the centre provide accommodation for a few researchers, volunteers and up to sixteen overnight visitors. 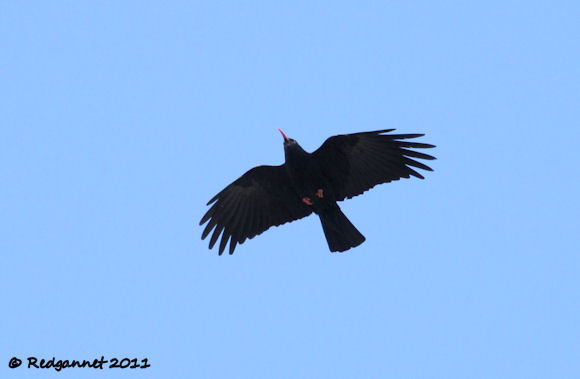 A pair of Red-billed Chough flew over as we waited for the boat to arrive at Martin’s Haven. Common Guillemots and Razorbills  skittered out of the way of the ‘Dale Princess’ during the 15 minute trip across to the island. 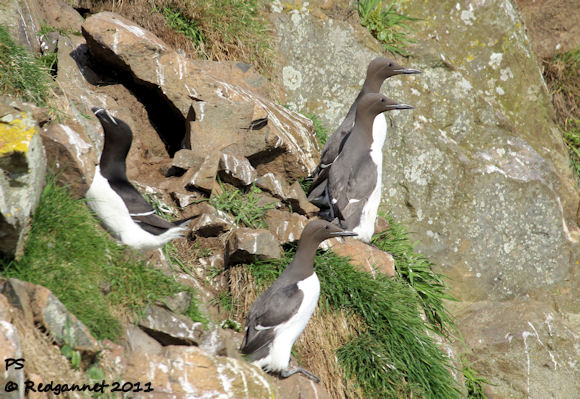 We were greeted by Guillemots (who had to be edited to face the same way) and Razorbills on the rocks at the landing point where the warden, with some volunteers, helped carry our excessive luggage up the steep steps. Our bags were loaded onto a tractor and taken to the old farmhouse in the centre of the island where we were booked in to spend 3 nights.
We were left to walk the kilometre to the accommodation which would only have taken a few minutes if it were not for the birds that needed looking at. The boys walked ahead and we were accompanied by Jan, who had spent a lot of time on the island and had previously worked there as a volunteer. 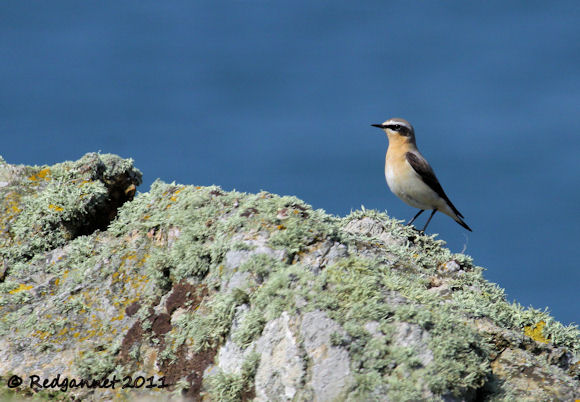 Northern Wheatears sat up on the many rocks and hummocks that covered the landscape. Skomer is home to thousands of Rabbits, Atlantic Puffins and Manx Shearwaters, all of which live in burrows, so the main features of the island are holes and humps. Rocky outcrops were topped by Lesser Black-backed Gulls while a Northern Wren called from a projecting edge. A wall made from local stone ran alongside the track that led us to the farm house where we settled in before setting out to explore the island. 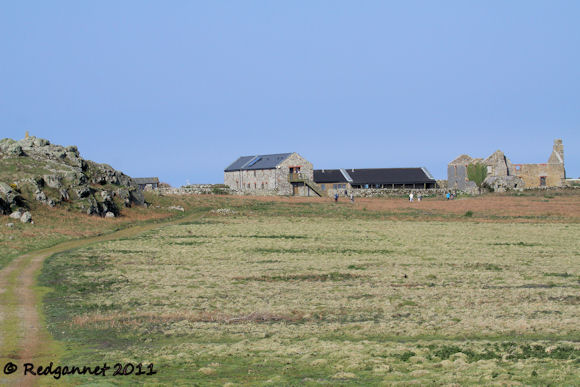 We started out across North Valley towards Garland Stone. Small bushes and brambles held some warblers passing through. They did not sing, but the lighter coloured legs assured us that we were looking at Willow Warblers. Only one Chiff Chaff was seen. 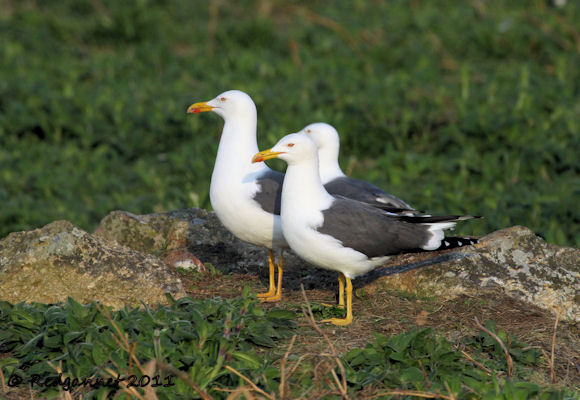 Lesser Black-backed Gulls were very common across the valley before we came to the northern shore of the island. Across a narrow channel is an algae-covered, grass topped rock known as the Garland Stone. From the cliffs beneath us, Northern Fulmars flew out across the water and looped back to land. They were a long way down and I spent a long fruitless time trying to get a picture. 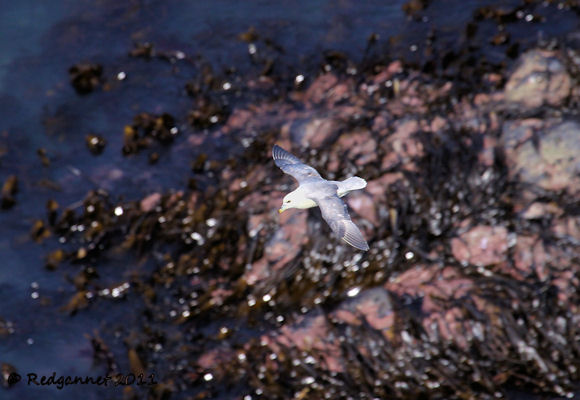 Grey Seals were hauled up on a flat ledge near the water’s edge. Further out, Northern Gannets passed by and a European Shag flew close to the water’s surface along the channel. A strong tide passes the rock and it can be a productive spot for Common Porpoises, but not on this occasion.
We followed the cliff path anti-clockwise past Bull’s Hole, heading towards The Wick which is famed for its Atlantic Puffins and their approachability. The pollution levels on Skomer are very low which allows dramatic algae and lichen growth on the rocks. Some of the perches were as attractive as the birds themselves. 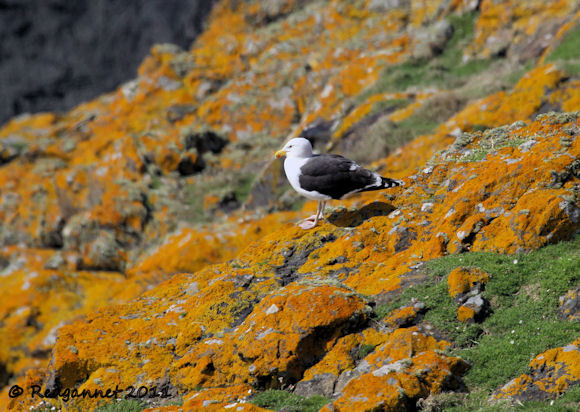 A large colony of Black-legged Kittiwake covered the cliff overlooked from The Wick. Northern Fulmars too were paired up on the cliff, but our attention was drawn by the Puffins. 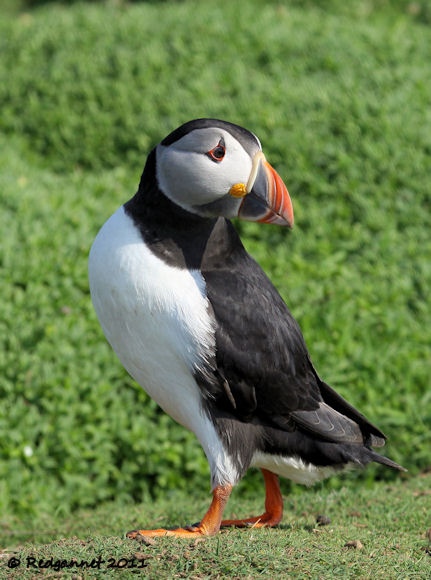 There were only a few standing on the grassy slope by their burrows when we arrived during the mid-afternoon, but we took some advice and returned later in the evening when they were emerging from their burrows and coming in off the water. Although there were not the huge numbers that we had hoped for, they were very approachable as promised. 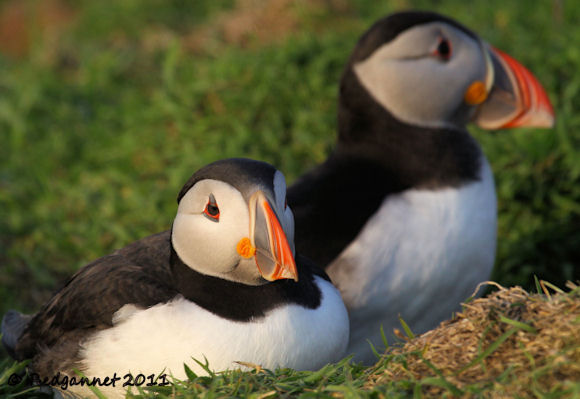 The BBC’s Springwatch cameras were there to record the spectacle as the annual armchair naturefest approaches. 'Skomercam' is positioned at the top of the cliff, surrounded by puffin burrows. There is a microphone to add sound and life to the pictures. Not realising that he was standing close to the mic, Martin let slip a piece of intimate news to all the listening puffin fans that I am sure they would rather not have known. 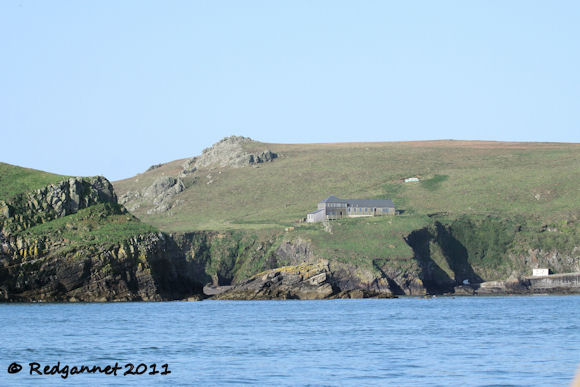 The Wildlife Trust of South and West Wales have built a terrific website with tons of information, maps and logistics for anyone wishing to visit Skomer. I would draw your attention to one detail which deserves highlighting. The boat does not ferry visitors to and from the island on Mondays. If you turn up on a Monday, you will have to be satisfied with a cruise circumnavigating Skomer and its neighbouring islands. This also means that visitors staying overnight on Sunday will have to stay the extra night until Tuesday (Incidentally, the ‘first come first serve’ policy on the ferry left a few disgruntled passengers having to wait for the next sailing, though overnight guests take precedence over day-trippers). The boat only runs during the season between April 1st and October 31st.
Species seen 36;

Day 2, Day 3 and Day 4 can be found at these respective links.