Despite having just landed in a place described as “the fairest cape”, my first port of call was the sewage works at Strandfontein, just over the dunes from the beach road that skirts False Bay, Cape Town. 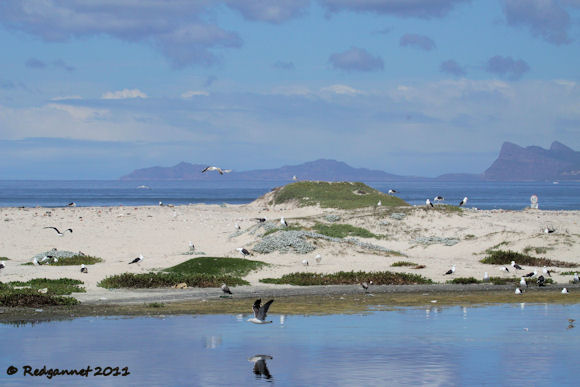 The Cape Argus, a huge cycling event, was in progress, so I had to take the long way round to get there and arrived at about 10.30.
The drive along the approach road produced some Black-necked Heron which often feed on rodents in the thick rank vegetation here. 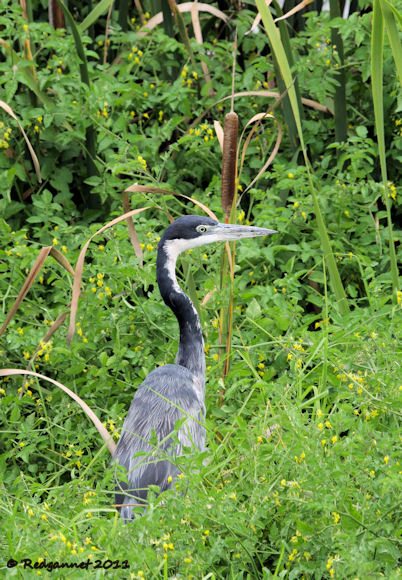 I usually visit Strandfontein straight from the flight and get changed out of my uniform somewhere discrete. The plane doesn’t land until about 09.00 so I have never been here early enough to have to wait for the guards to come on duty. A causeway between two deep ponds enables early birders to start before the security barrier where one is required to sign in before moving into the settling lakes. This morning Egyptian Geese, Cape Shoveler and Cape Teal were to the left with more shoveler, White-breasted Cormorants and an African Darter to the right. 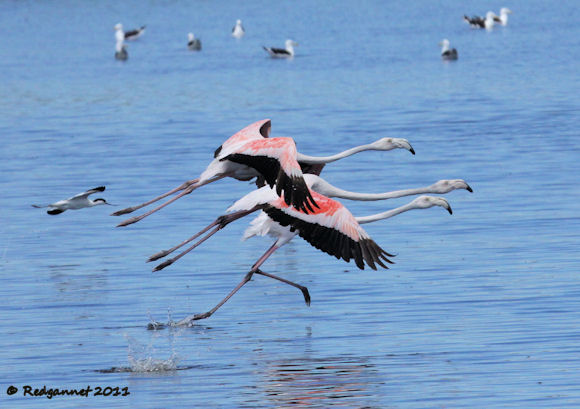 Beyond the security post, directly ahead (Google Earth ref; 34 04’46”S 18 31’10”E), are the buildings and workings of the plant, to the right a small barrier allows access to the birding areas. Greater Flamingos skittered across the surface of the water to get airborne and flew between ponds mading a wonderful sight against the backdrop of the Table Mountain massif.
As often happens when I go birding straight from a flight, I get lazy. Eurasian Swallows were present in good numbers, but I stopped paying them too much attention after I had identified them to my satisfaction. I later realised that at least two of them were White-throated Swallows. The two species are superficially similar, pale beneath with windows in the tail. Female Eurasian Swallows have shorter tails and I might well have missed a lot of white-throats. 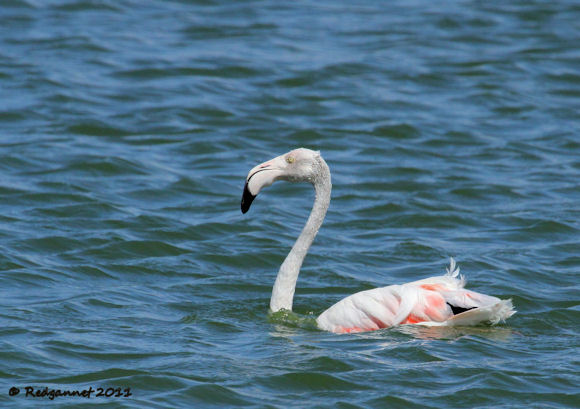 The flamingos were in most ponds in small flocks of up to 20. Most were in deep water and may even have been swimming. Only in the roosting and preening birds could the classic silhouette be seen.
The first junction is marked by a small building at the hub of a pinwheel of pans. The lakes around the hub are numbered P1 to P6 anticlockwise. The pans to the south, closest to the bay are named S1 to S8 from west to east. I turned left (south) and found a pan with Great White Pelican, and lots of Spur-winged Geese along with the flamingos, cormorants and shovelers. 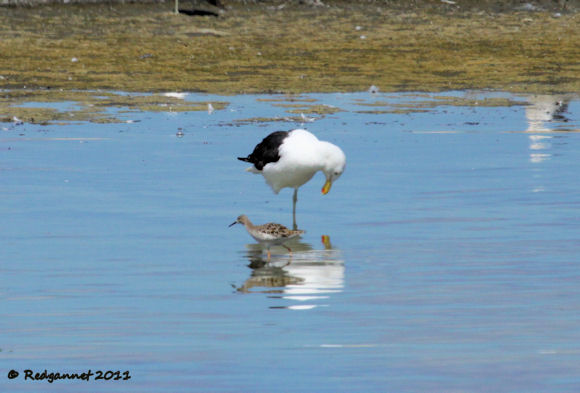 I had lost track of the pan numbers by now, but stopped to watch a small flock of Ruff and compare their size with the huge Cape Gull (split from the Kelp Gull).
Then I made a foolish mistake. I turned to the east along a road running parallel to Baden Powell Drive, the R310. This took me around into the scrub and dunes behind the plant where it became difficult to turn around. I felt sure that by continuing, the road would lead back to the plant and I would be able to get back on track, but then my car sank into the soft sand. Only the causeway at the entrance has a prepared surface, the rest are gravel and sand roads. This one had me truly trapped. A Karoo Scrub-robin popped his head up to see what the swearing was about and a Jackal Buzzard that was perched nearby moved back from the tirade, but hung around to see what developed. Without letting the narrative get too dramatic, I tried and failed to dig myself out and decided that I had to find help.
The plant site had three big strong chaps to whom I will be eternally grateful. They dug and they pushed and they shook their heads. They returned to the plant for planks and levers and eventually, after much grunting in Afrikaans and revving in English, the car moved back out onto firmer ground. Thanks guys! 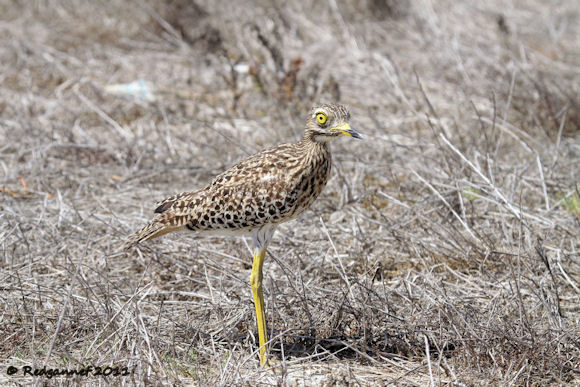 Following my humiliation, I reversed back to the most recent junction and noticed a Spotted Dikkop (I believe the fashion is Thick-knee these days, but I am a terrible stick-in-the-mud (or sand, whichever)) standing completely still on the corner. It waited while I took its picture, then began walking very slowly back into the thin brown vegetation at the roadside. It stopped and began to crouch. Between its legs, I noticed a single egg. The egg and the bird were perfectly camouflaged except for the dikkop’s bright yellow eye, legs and bill. I pulled back to allow it some personal space and it settled. 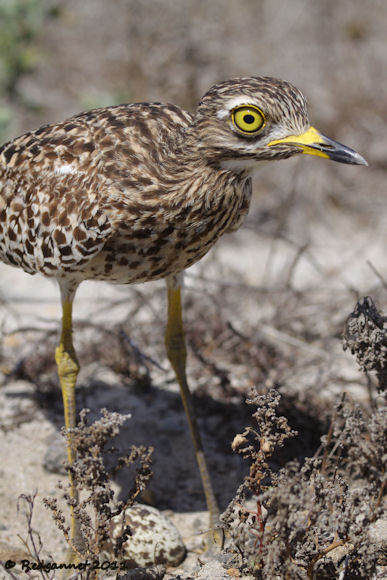 My wanderings had led me away from the main area of pans so I returned to the tracks more travelled and found my way blocked by a gull and tern roost on the road between P3 and P2. The works are right beside False Bay and lots of gulls are attracted here to roost away from the beach. In front of me were Hartlaub’s Gulls and Great Crested (or Swift) Terns. 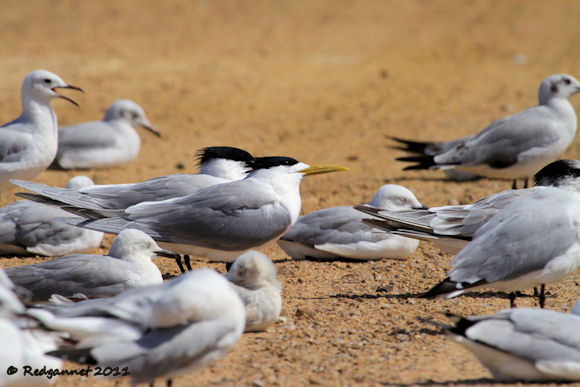 To my right a much larger roost in the middle of P2 held a bigger selection as well as a Little Stint working the margins. I had to pull back and find another way round to get a better light direction on the bigger roost. There I found Sandwich Gulls, Common Terns, Cape Gulls and a couple of Common Greenshank along with more representatives of the road roosters. Strandfontein is a popular spot for Cape Town’s birders and any that you come across are welcoming and helpful. If you wish, you may get out of your car at any time, but the birds prefer you to stay in the vehicle. If I have one piece of advice for you it would be to stick to the main roads (I am embarrassed to admit that this is the second time that I have got stuck in the sand in Cape Town). It took over two hours to get back onto firmer ground this time. Last time I was ably assisted by 12 young men from the squatter camp nearby. I have been extremely lucky in my foolishness. Baden Powell Road, the R310, runs along the north edge of False Bay towards Muizenberg. Strandfontein Road runs north from Baden Powell and the entrance to the works is through a litter-strewn approach on Zeekovlei Road at Google Earth Ref; 34 03’12”S 18 31’45”E.
Species seen; 53