A blowy day at Dungeness

My birdy buddie, Martin, was visiting overnight and my wife packed us off the next morning to get us out from under her feet. The weather forecast was predicting strong winds, so naturally we chose the most exposed place that we could think of. Dungeness can be a desolate and unenticing place on an overcast, cold and blowy day. It is low and flat, there is little shelter and the wind was blowing in from the sea. 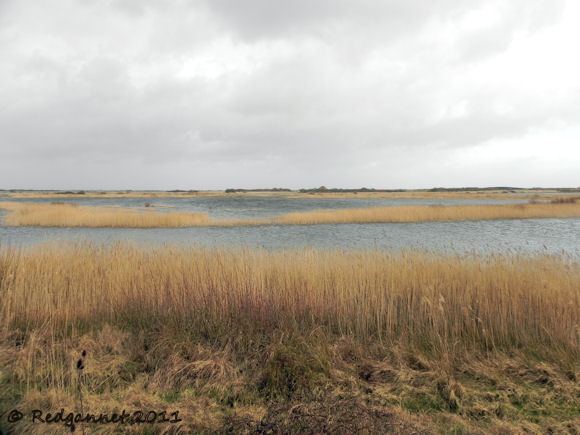 We took the scenic route through Romney Marshes, stopping occasionally to see if any of the swans on the fields were straggling yellow-bills, but all we could find were the Mute Swans.
At one stop, we must have been sitting right underneath a Peregrine Falcon which we only noticed as it leapt from the telegraph pole and chased a mixed gathering of Starlings, Carrion Crows and Wood Pigeons.
A large roost of Herring Gulls, Greater and Lesser Black-backed Gulls sat back from the road on the approach road to the car park and Visitors' Centre. 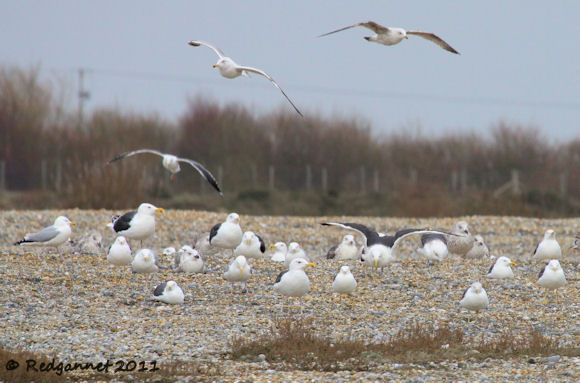 On arrival, our first job was to have a cup of coffee and mull over the recent sightings on the noticeboard at the Visitors' Centre at the RSPB Reserve (Google Earth ref; 50 55' 42"N 00 56' 28"E). The glass wall of the centre looks out across a large lake and we scanned for ducks and gulls. There were Gadwall, Shoveler, Coot and mixed gulls roosting on a small sandbar. Close in, a grey bird caught my eye. Unlikely as it seemed, a Red-throated Diver was swimming by, almost under my feet. We dashed outside to gather the cameras and try to get to the first hide ahead of the bird, but it mysteriously disappeared until we found it again way across at the far (north) end of the lake. We made the decision to power through the wind and push to the furthest hide and work our way back. Dengemarsh Hide looked out over a wide area of water surrounded by reeds. Reports suggested that a Bittern may be found here, but despite scanning the phragmites from both directions, we had no luck. Cormorants were showing their breeding colours and Tufted Duck were very common here. A Marsh Harrier was hunting on the far side and cornered a couple of ducks which dived to evade the swooping raptor until it gave up.
In the fields along the path a few Curlew and Shelduck were staying low beneath the wind.
From Scott's and Makepeace Hides, I was looking at the immature gulls on the sandbar. Martin and I could not agree, so their identity remains inconclusive. 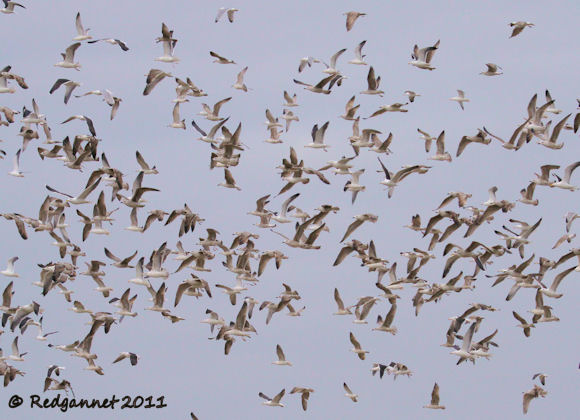 As we passed the large gull roost on the approach road on the way out, it was disturbed by a young male Marsh Harrier, who in turn was being chased by a mature female. The numbers for gulls shown below are only the birds actually identified and probably don't bear much relation to the actual numbers present which either remained unidentified, caused disagreement between Martin and me or were flying about in a cloud that precluded accurate counting. 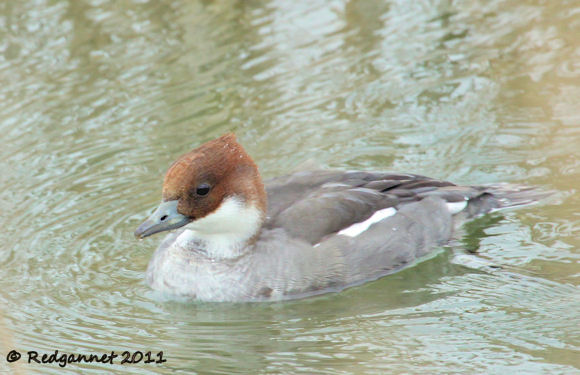 Across the road on the ARC pit, reports included Smew. Both of us scanned back and forth without any luck in finding the tiny low-swimming sawbill. We whiled away the time looking at Pochard, Cormorant, and some distant Common Golden-eye. I had not associated the Smew with the sawbill family before, but was struck by the similarity when a single female appeared as if from nowhere and treated us to a very close approach across the front of the hide. 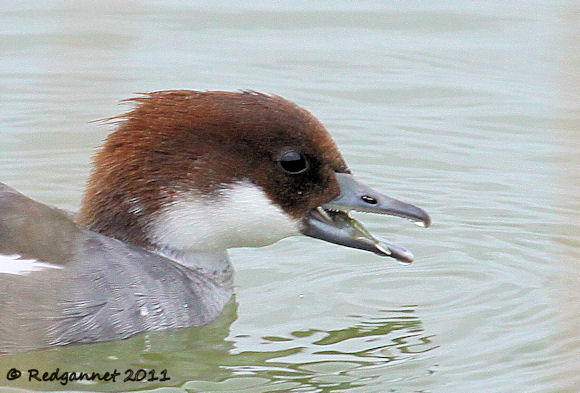 Tiny 'teeth' were visible at the base of the bill. She made a couple of passes and even ducked beneath the water in the reeds in front of the hide to catch sticklebacks.

The birds from the drive in and the visit to the reserve have been entered as seperate trips on my software, but then added back together to give some very odd numbers for the list above.
Posted by Redgannet at 13:07