Surely this morning I would be able to go about my bird watching business without sinking into the sand or getting caught for hours in traffic. My destination was Sir Lowrie’s Pass in the Hottentot Holland Mountains. I wanted to look for Rock-jumpers and the like at the top of the pass and had made an early start. At 06.30, at the foot of the pass, a police roadblock was stopping traffic and diverting vehicles. The mountain was on fire! 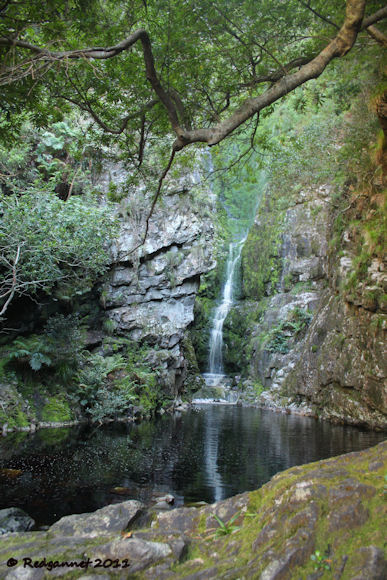 Leopardskloof at Harold Porter Botanical Gardens
After a quick change of plan, I decided to visit Betty’s Bay and Harold Porter Botanical Garden instead. I arrived too early for the gardens, but the small village at Betty’s Bay had plenty of birds, including the only other mainland penguin colony in Africa (the other being Boulders that I visited in the previous post). Cape Francolin were common around the roads of the village and the first Cape Weavers and Pied Kingfisher of the trip were found here too. The white, guano covered rocks were easily visible from the car park. 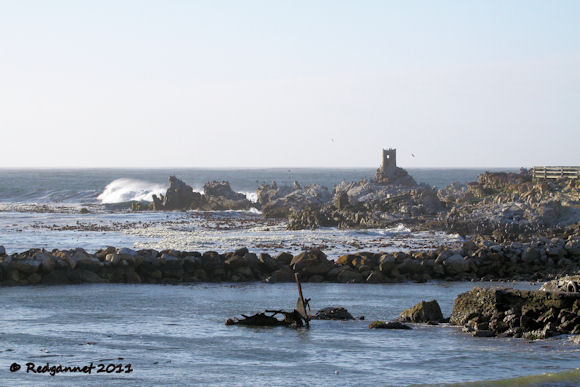 Down on the beach some Egyptian Geese sat on a small fence. Some Hartlaub’s Gulls and Great Crested Terns shared a breakwater with a Cape Cormorant. In the water was a Jackass Penguin. A sudden flurry announced the attack of a Peregrine Falcon as it swooped. It seemed to be aiming either for the cormorant or the penguin, but missed both and flew back to alight on the tall aerial to the right. It wasn’t possible to access the penguin boardwalk until 08.00, but 2 penguins, like naughty teenagers coming home late, found a way in via a shallow gap under the fence. A Cape Hyrax had come out onto the rocks to warm up in the early morning sun. 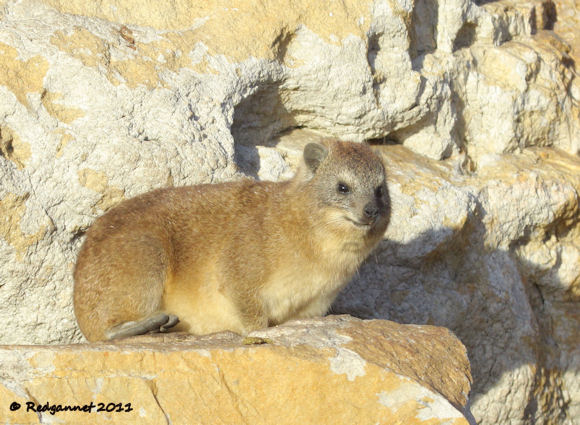 My hope was to visit Leopardskloof in Harold Porter Botanical Gardens and at 08.00, the gates opened and let me in. Leopardskloof was a fenced off area that needed permission and a key until recently, but now it is accessible to anyone during opening hours. It consists of a steep tract of coastal fynbos and a small section of coastal forest in a ravine with a stream running through and a waterfall at its head. The sides are precipitous and the rocks, though stable in the short-term, are plainly vulnerable over time. 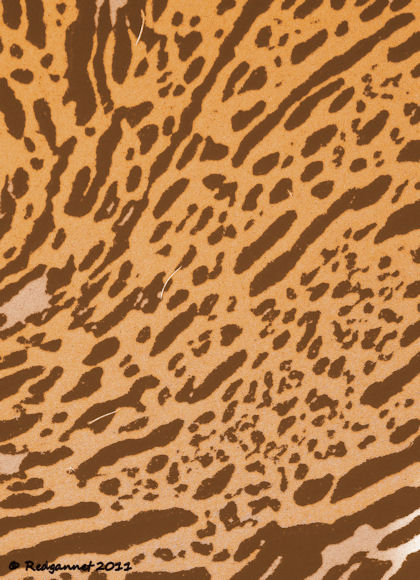 To reach the kloof it is necessary to pass through the gardens to the top of the slope and cross the stream. Scum on the surface of the water under the bridge, had formed intricate patterns that could only have come from Africa. 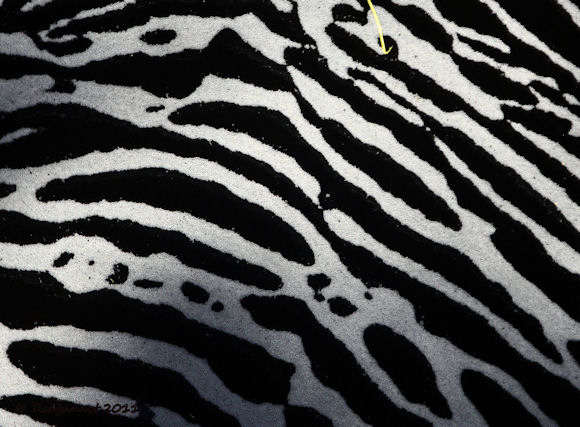 The garden held Orange-breasted Sunbirds, Malachite Sunbirds and Some Alpine Swifts overhead.
A fire has taken much of the fynbos leading up to the ravine, but beyond the fence, all seems to be intact. A Sombre Bulbul called its strident alarm as soon as I came over a little rise. 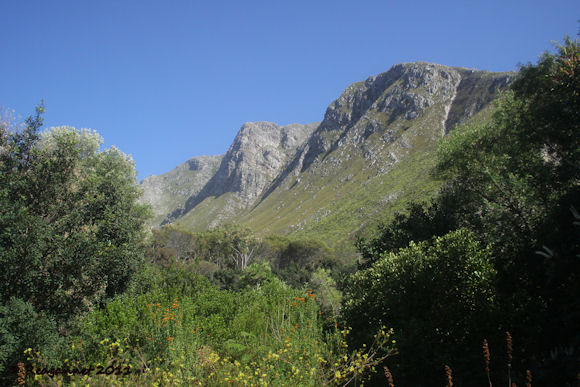 The trail leads into the forest and crosses the stream 3 times before reaching Steffina’s Gift. Small stones had been placed by a plaque dedicated to a benefactor who had sponsored a series of ladders that enabled access to the top of the ravine and the small waterfall. The top pool is surrounded on three sides by vertical cliffs and a lip of rock at my back made me feel as though I was in a well. 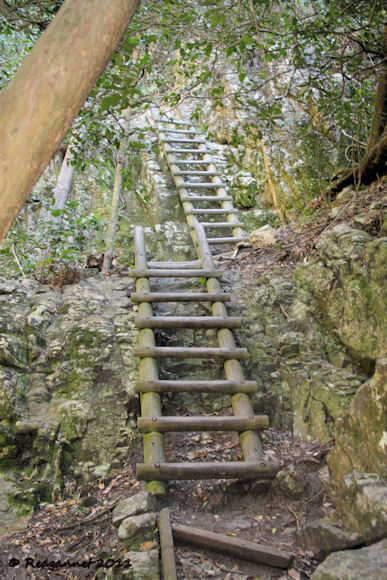 The climb up was not been arduous, but neither had it been productive. Only the bulbul and a couple of Cape White-eye had shown. I had stopped for a while after hearing what might have been the call of a Blue-mantled Crested Flycatcher but was not able to confirm it for a red tick. The way back down brought a Cape Batis, a couple of Olive Thrush and a few more white-eye. Leopardskloof had not lived up to the hype today, but it does have a good reputation and will be worth another look next time. 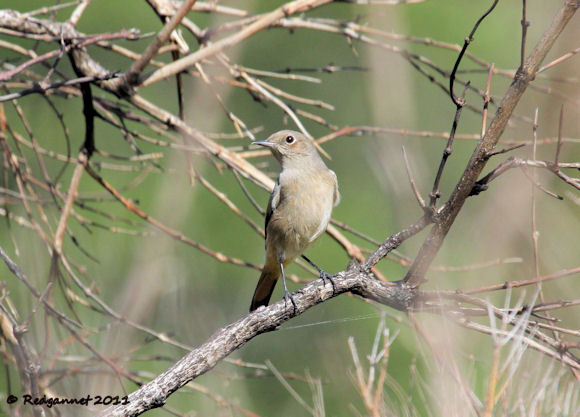 Back in the gardens a Familiar Chat flitted by, stopping only briefly. A pair of adult Verreaux’s Eagles were circling. They found some warm air, gained height fast and glided away, showing their distinctive silhouette. 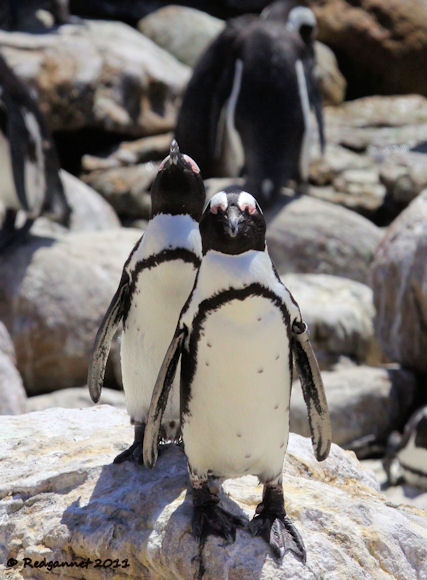 Back at the penguin colony the boardwalk was busy I stopped to see if a pair of them would give a nice superimposed picture. It almost happened, but my main interest here was the cormorant roost at the point. Using the scope, I managed to pick out four species, Cape, White-breasted, Bank, and Crowned Cormorants. The first two species were easy to find close to the viewing spot. The other two preferred to be at the extreme edge of the point.
Out on the ocean, Cape Gannets approached a little closer to shore, but were still quite distant. They formed rafts when they weren’t fishing. On my way back to the car I added Sandwich Tern and White-throated Swallow, but the highlight of the day came in the shape of a Kittlitz’s Plover. 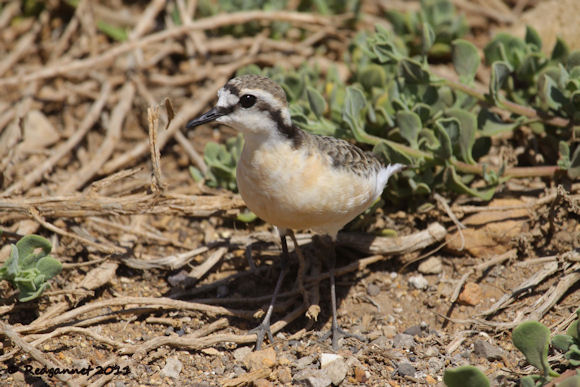 The little bird had scraped a little nest right beside the busy path that visitors use to access the penguin boardwalk and had to retreat from it whenever anyone passed. I stopped in the middle of the path and placed my bag strategically so that path users would have to use the far side of the path and not disturb the plover. This partly worked except that some people will still insist on walking in front of cameras, even if they have to step over bags to do it. More considerate people stopped to see what they might be disturbing before making a wider pass.
Its (his?) choice of site is surely a bad one and although there was a potential partner on the beach, it never showed any interest in a nest so subject to disturbance. 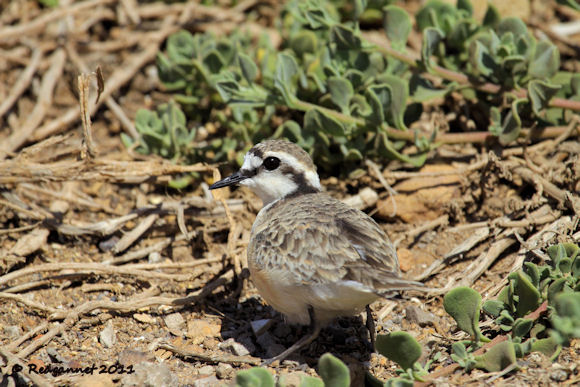 Betty’s Bay is on the coastal road between Gordon’s Bay and Hermanus (Google Earth ref; 34 22’22”S 18 53’ 38”E. The white guano-stained rock and the boardwalk are clearly visible on Google Earth). It would take about an hour from Somerset West.
Species seen; 37 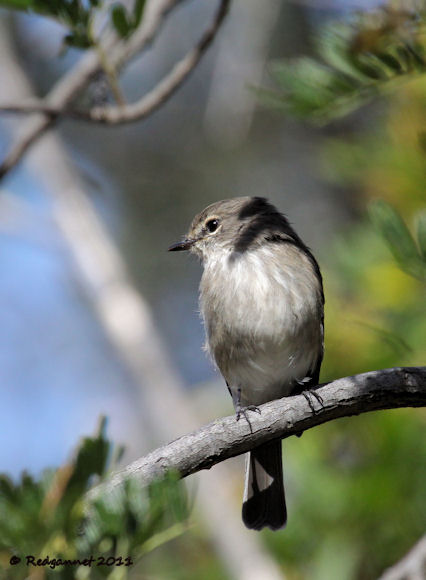