The Potomac River marks the boundary between Virginia and Maryland. At Great Falls Park (Google Earth ref; 38 59' 49"N 77 15' 17W ), after draining some 11,500 square miles of its rainwater, the river surges through the narrow Potomac gorge and over the rapids for which the park is named, dropping 76 feet in the process. The flow was slightly above normal today and made an impressive sight. Viewpoints have been built to show off the falls at their best, but worryingly, a high water marker shows the levels of dramatic floods that covered these platforms when the river rose to inundate the picnic areas at the top of the bank. 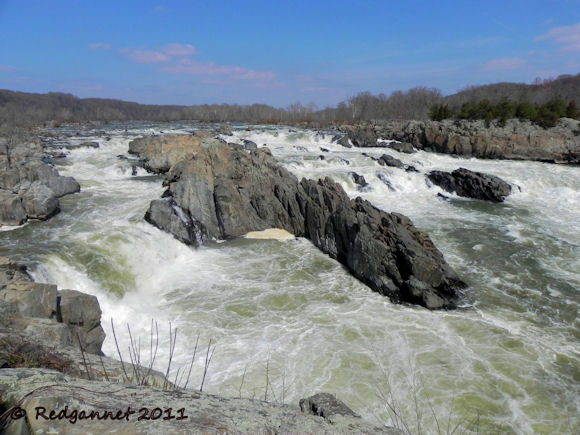 To facilitate supply and trade with the western frontier, the Potowmack Company (founded by none other than George Washington) built a series of canals to navigate the falls. Remnants of one these canals from 1785, are still visible on the Virginia bank and continue to provide a calm water habitat alongside the torrent of the river. 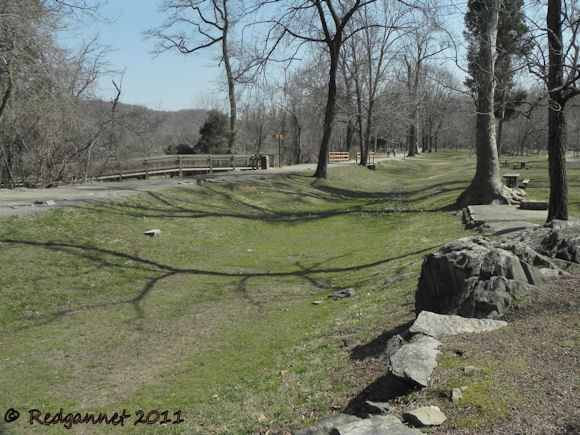 Downstream from the viewpoints, the canal holds water and a rough harmony emanated from it. Frogs were calling and copulating in the sunshine. I watched for a while and loved the standing waves produced by the vibrations when this frog inflated his throat sac to call. Further downstream, signs request no cycling. 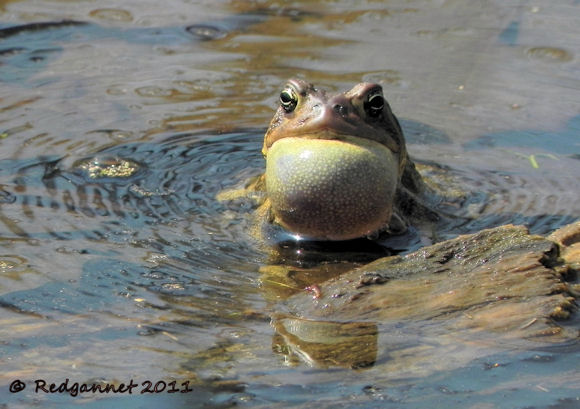 By the Visitor's Center an Eastern Bluebird was eyeing up a female who flew provocatively close to catch his attention. 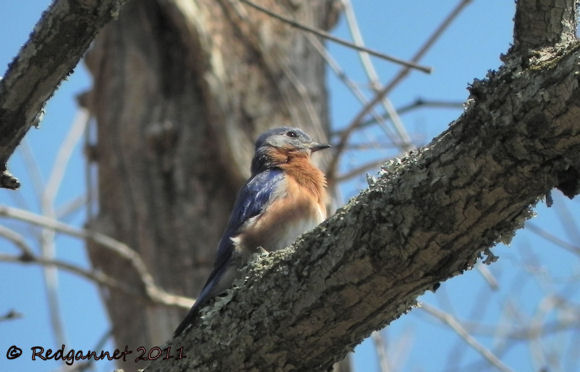 Upstream of the main area a path follows the canal and arrives at the bank of the fast flowing Potomac.
Islands mid-river held some Canada Geese and on the far side a large nest looked to have a white head poking from it. I watched for a while but it didn't move. A ranger told me that it was the nest of a pair of Bald Eagles that return each year to breed, but no-one had seen the birds yet this year. 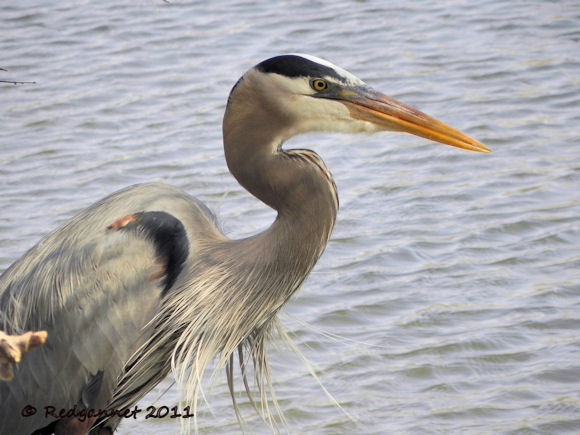 On the near bank a Great Blue Heron was keeping an eye out for fish. I must admit to being captivated by the river and did not venture very far into the woods away from the water.
The environment inland from the river is mature forest with a lot of dead wood. There were plenty of Red-headed Woodpeckers and a Pileated Woodpecker too. A Downy Woodpecker was heard, but that does not qualify it for the list.
White-breasted Nuthatches, Tufted Titmice and Carolina Chickadees were common in the woods. This area is very close to a point where chickadees could get tricky. These gave a much faster call using the "Mississippi River" rate of about 6 "-dees" per second following the "chic-a" instead of the slower, "Hudson flow" at just 3 "-dees" per second. 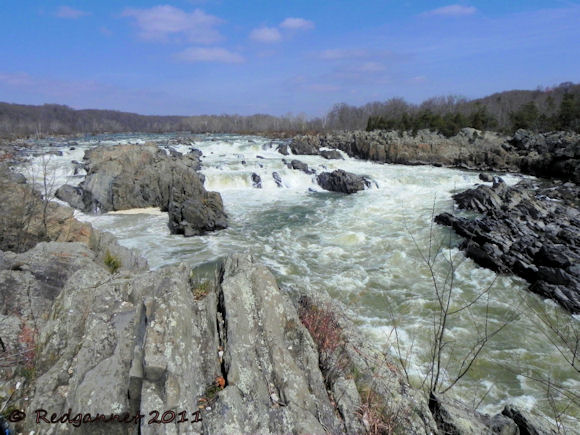 To cycle from Tyson's Corner, head north on International Drive. You will soon pass under the 267 Freeway and then cross an odd junction leading into Spring Hill Rd. After about 1.6kms you will reach a crossroads with a gas station. Turn west (left) onto Old Dominion Dr and follow this for 4.3kms. At the junction, Great Falls Park is sign posted immediately ahead and is about 1.7kms into the woods here.
The roads are well paved, but are a little narrow. The trails in the park by the river do not have a hard surface, but were easy to cycle on.
There is more uphill on the way back and it took me approx 45 minutes to return to Tyson's Corner.
There is no taxi rank here. If you wish to visit by taxi, you should arrange a return ride.

Other posts from North America can be seen on the USA and Canada page.
Posted by Redgannet at 19:07