At the top of Tai Mo Shan mountain, approximately 3000 feet above sea-level, are 2 football-like receiving/transmitting installations. The spheres (for they are shaped like proper footballs) are visible from most places in Hong Kong as they are sited at the highest point of the former British colony. 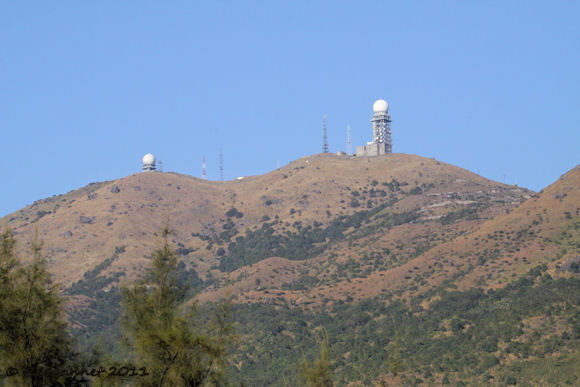 Habitat on the mountain includes grazed grass along the roadside, longer grass on the steeper slopes and stunted, thickly growing bamboo. Scrub on the lower and mid levels thins out to a boulder strewn hillside as the summit is reached, but clings on in damp gullies.
The view from the summit included Deep Bay to the north with Lantau Island to the west. South was Hong Kong Island and Victoria Peak. 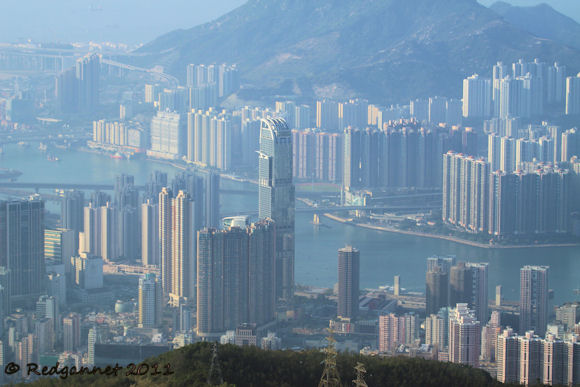 I was here to look for Upland Pipits and other species that prefer higher ground. The pipits in particular like to be above 500m. The turn in to Tai Mo Shan Road at the Country Park is at about 450m asl. I took the lazy option today and the taxi dropped me at the control gate at approx 650m asl.
The first birds I saw were pipits, but these did not have the strongly streaked back and chestnut wings that would distinguish them as Uplands. These had subtle dorsal markings which left me with no alternative but to start my day list with Olive-backed Pipit.
Calls from the thick scrub indicated Mountain Warbler that would have been a tick if any had shown themselves. Similarly obstinate was the Chinese Babax whose “hoot, hoot, hoot” was the only indication that it was present.

The babax are said to be gone from the mountain, but the call was very like the description in the field guide. I looked it up when I got home and could not find a better alternative.


It goes without saying that Black-eared Kites and Large-billed Crows had made it onto the list, but precious little else had. After 2 hours, I made it to the installation at the summit with a grand total of only 5 species which sadly did not include the Upland Pipit. The descent barely doubled my tally with a hovering Kestrel and a Plain Prinia. The best bird was a Blue Rock Thrush conspicuously perched on a boulder. I was hoping that it might be a red tick, but suspected that I had seen it before. Indeed my only other sighting was in Oman in 2000. The blue race in Hong Kong is Monticola solitarius pandoo. 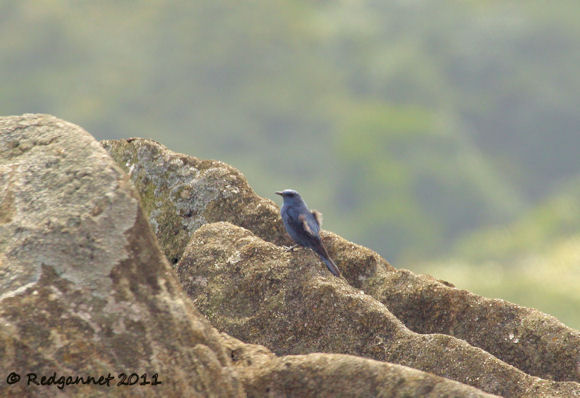 At about 800m asl a path led down to a saddle between the summit and a lesser peak with extensive areas of short grass; good pipit territory I thought. A Black-faced Bunting and an as yet unidentified bird flushed from the scrub. This is what passed for a “hot-spot” today. I want to say Plumbeous Redstart for the mystery bird, but the habitat seemed an unlikely spot for a bird that prefers fast rocky streams.
The MacLehose Trail runs up from the main road (Route Twisk) and meets up with Tai Mo Shan Road at the control gate to complete the climb to the summit together. Be warned that the steps on the trail are steep, uneven and seemingly endless. It is classed as a difficult section of trail and it certainly makes birding tricky if you have to concentrate on where to put your feet. The steps head straight up the mountain without making any attempt to lessen the gradient by using switchbacks. The road is quiet and much more leg-friendly. 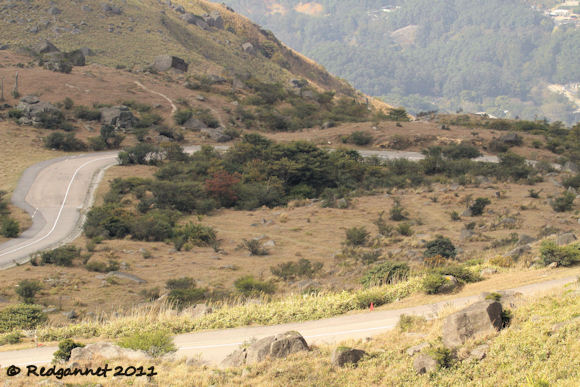 While the birding was slow today (end of February), I feel that in a month or so when the birds thoughts turn to finding mates, it will pick up.

To reach Tai Mo Shan, take the MTR to Tsuen Wan at the end of the Red Line. From here, KMB bus no. 51 goes up Route Twisk towards Shek Kong and will stop at the Country Park (Google Earth ref; 22 24' 20"N, 114 06' 19"E). . Tai Mo Shan Road and the MacLehose Trail lead seperately up the mountain from here until they meet at the control gate. While the trail takes a macho, straight up approach, the road uses the contours of the mountain for a much gentler gradient. Make life easy on yourself and take a taxi from the MTR station and double tip the driver to stop him "tutting."
Green minibus no. 80 only goes as far as Cheun Lung.