A journey into the mountain grasslands of Mpumalanga is just the tonic for a chap still suffering from the effects of the winter malaise. Two and a half hours from the OR Tambo International Airport at Johannesburg is a small town named Dullstroom and just beyond the town is a small road on the left marked to ‘Die Berg’ (Google ref; 25 22 21S 30 08 31E ). This unmade road crosses the railway line and enters a vast tract of grassland. 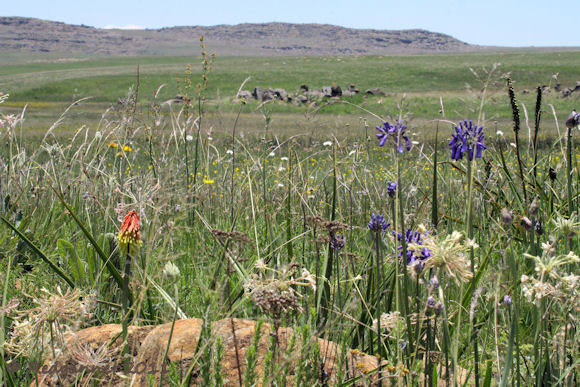 The journey had included a lot of common and widespread birds such as Hadada Ibis, Blacksmith Plover and Red Bishop, but the large part of the drive is on the motorway and it had not been possible to stop. The first opportunity I had to pull over came just beyond Belfast (on the R540) where a Long-crested Eagle perched on a telegraph pole. 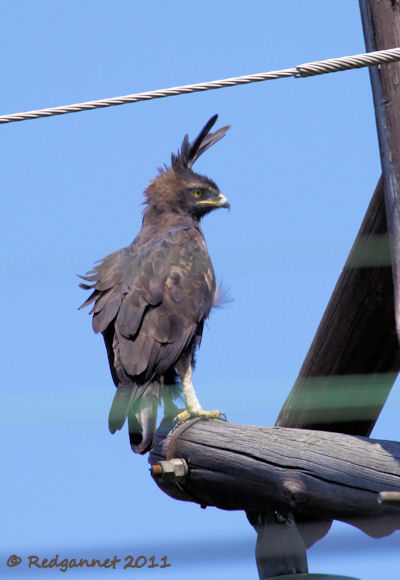 The traffic on the unmade road into the grassland is very light, but please be aware that vehicles come round corners and over rises quickly and suddenly. Birds were seen as soon as I crossed the railway line with a White Stork and a Black-headed Heron in a newly mown field and Cape Canaries on the phone lines. 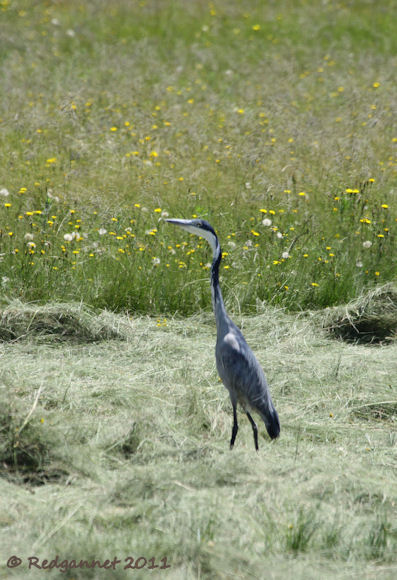 3kms on from the railway line is a rocky slope out to the left of the road. This often holds Malachite Sunbirds and Grey Rhebok may be seen here too. I stopped especially to scan the proteas on the hillside for Gurney’s Sugarbird. This is a spot recommended by the incredibly accurate ‘Southern African Birdfinder’ book and the sugarbird was one of my targets for the trip. The proteas are a bit distant from the road and I was unable to pick out a sugarbird on this occasion. 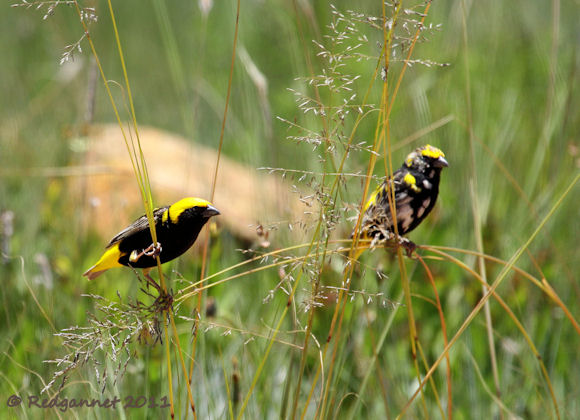 Further along on the right is a marsh created as waters from a dam on the left trickle into a dam on the right side of the road. Red Bishops, Yellow Bishops and Yellow-crowned Bishops can easily be found here along with the non-clergy birds such as Southern Bald Ibis, Red-billed Quelea and Red-collared Widow. All were sporting their magnificent breeding colours on this week before Christmas. The females however put in very little effort and remain dowdy throughout the festive season. 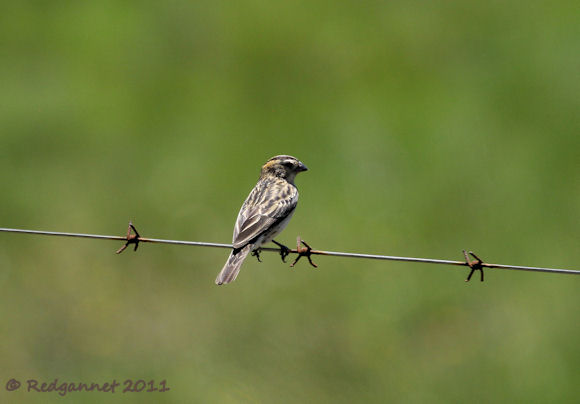 On the next bend, exactly as predicted by the ‘SAB’, a Buff-streaked Chat hopped amongst the rocks. From here-on-in the vista opened out and the wide expanses of grassland, strewn with rocks and wildflowers reached to the far horizons. 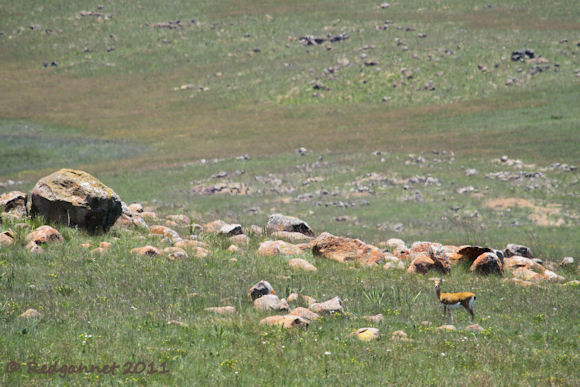 Mammals such as Blesbok, Common Duiker and Common Reedbuck were seen, but these animals do not enjoy any kind of protection from National Parks or sanctuaries and are truly wild and thus very shy.
There were cisticolas and pipits, but when faced with tricky birds such as these I often turn away and pretend that I haven’t seen them as to take the time to identify them correctly is not always an efficient way to spend a morning. A Long-billed Pipit stayed near enough and long enough for me to get a good look and an Orange-throated Longclaw was unmistakeable in the distance. 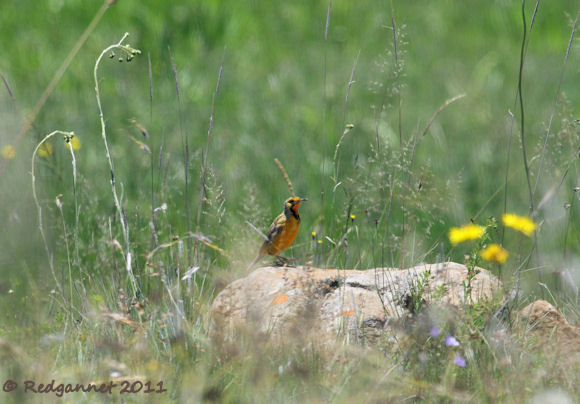 After about 17kms the unmade road rejoins the tarmac (R577) and I took the right hand option towards Lydenberg (Mashishing). A short way along here is another protea-studded slope that ‘SAB’ assured me would harbour my Gurney’s Sugarbird. There is a lay-by on the right where you could leave the car and walk down to the bushes on the gentle right hand curve at Google Earth ref; 25 14 02S 30 09 04E.
The sugarbird was not immediately obvious, but I could see protea flowers on these bushes which would exponentially enhance my odds of finding one. A cryptic-coloured shape in the shade of the furthest bush piqued my attention and after a few moments of trying to change it from a rock into something more exciting, it suddenly turned towards me with the big orange eyes of a Cape Eagle Owl. 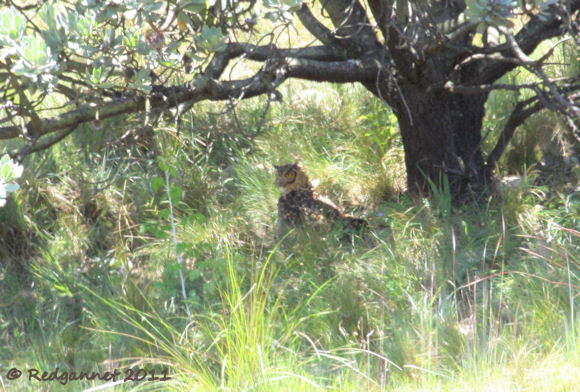 There are protea bushes on both sides of the road and silhouetted in the top of one of these was the Gurney’s Sugarbird which was my main target for the trip. It then flew back to where it was supposed to be, according to the ‘SAB’, and enabled me to get a picture with two lifers in the frame. 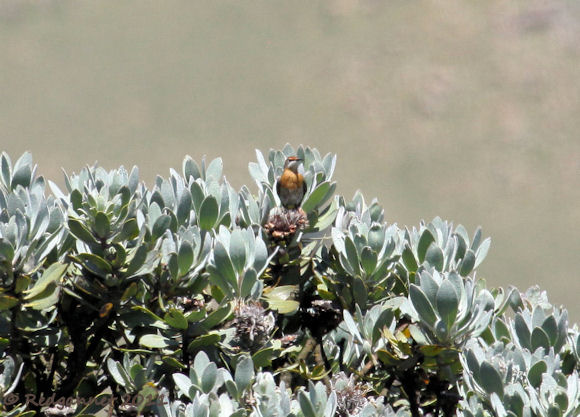 From here it is possible to get to Lydenberg and from there you can access the attractions of Blyde River Canyon, Mount Sheba, or continue down to the lowveld and the Kruger National Park.

If you do not wish to return to Dullstroom by the route you came. Turn right onto the tarmac towards Lydenberg (Mashishing) and turn back into the grassland after 9.5kms, at the sign for Vermont. Stay right at junctions along this road and you will eventually regain the R540 about halfway between Dullstroom and Lydenberg. There are many B and Bs and places to stay in either town. I stayed at Klitz Gras chalets  (Google Earth ref; 25 06 48S 30 26 50E ) at the T junction on the approach to Lydenberg and can heartily recommend it. Klitz Gras is also a very popular European Swallow roost. 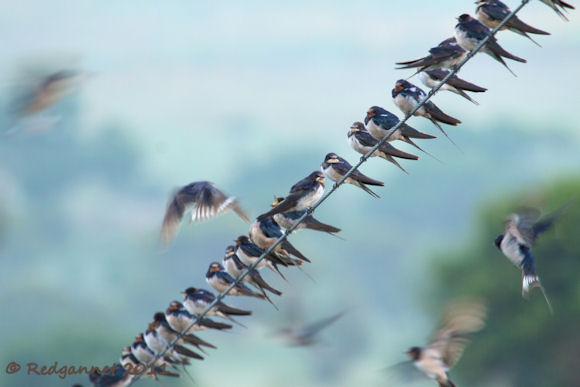 If you intend to hire a car in South Africa, please familiarise yourself with where you want to go as the car rental companies often do not supply maps or provide inadequate ones. CNA is a popular book and stationary store that sells good maps.
Petrol stations often don't accept credit cards and insist on cash.
Birds seen; 50

There are more posts from Dullstroom and nearby sites at the links below;
http://redgannet.blogspot.com/2009/10/more-time-i-have-faster-it-goes.html

Visit the dedicated Africa Page for other sites near Johannesburg and for posts from elsewhere in South Africa and further afield on the Dark Continent.
Dullstroom Grasslands, South Africa, JNB
Posted by Redgannet at 10:08