Autumn is closing in on December and the mild weather is predicted to turn wet and cold by the end of the week. The family was committed to school and other irksome duties, so I was able to visit Oare Marshes to look for some photographs to illustrate an upcoming 10,000 Birds post.

Before turning up Church Road to reach the marshes, I took a quick side trip along Oare Creek. A large white heron flew over the car and I tried to find it again to exclude Great White Egret. A leucistic Grey Heron has been seen in the county, but it could also have been a Little Egret and poor depth perception. 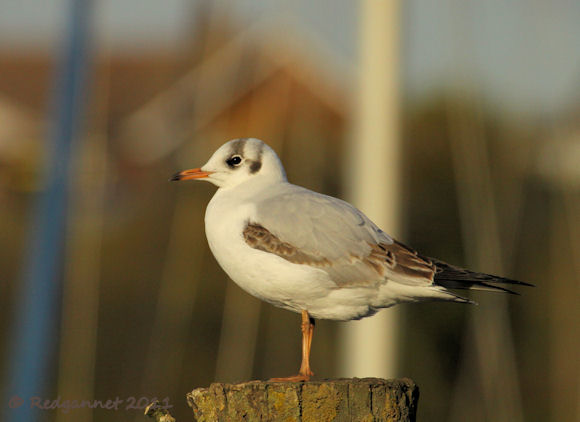 ﻿
The heron had disappeared so I had to make do with one of the plentiful Black-headed Gulls. The Common Redshanks were being slowly pushed up the banks by the encroaching tide and show well along this lane with the sun usually coming from behind. 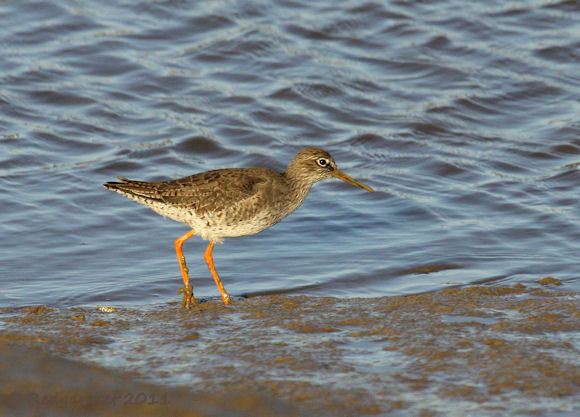 Church Road bisects the reserve with the East and West Floods found on their respective sides. A lay by overlooks the East Flood enabling birders to check the small island sanctuaries there that provided roosting spots for European Teal, Common Snipe, Common Ringed Plovers and Dunlin this morning.

The lay-by provides a temporary stop for a quick assessment of the flood before moving to the main car park by the launch ramp. The tide was due to reach its peak at just before midday at a height of 6 meters, so I had a little time to explore the rough grazing meadows of the west flood. Northern Lapwings and European Golden Plovers were roosting in the fields while Ruff actively fed amongst them. 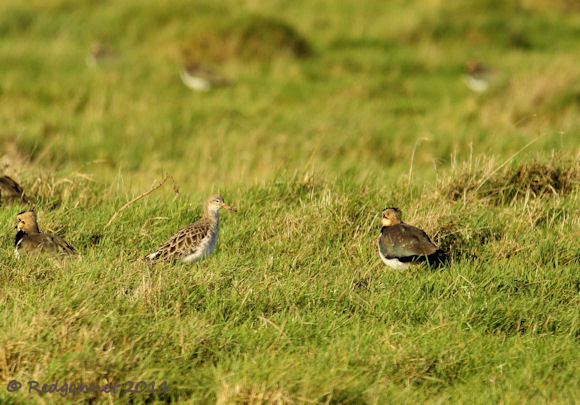 Back at the lay-by and viewing verge I was able to take a more leisurely look and found Cormorant, Shoveler and Pintail on the centre island with Black-tailed Godwit and Avocet in the distance.  More Northern Lapwing were seen with an occasional Grey Plover enhancing the appearance of their Golden Plover kin by comparison. 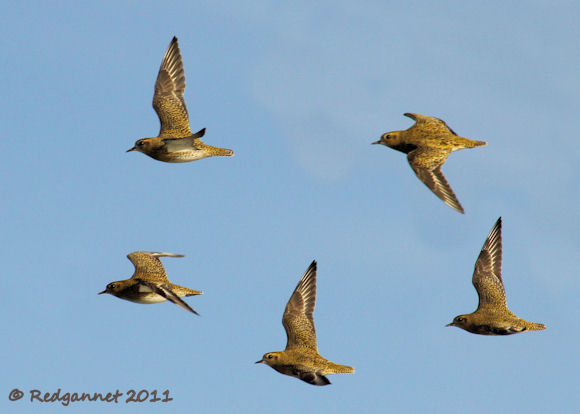 Three hides allow birders to scan the reserve in comfort and out of the wind. From the East Hide, which, naturally enough looks out onto the East Flood, I noticed a tiny bird in the distance and was able to pin it down as a Little Stint. 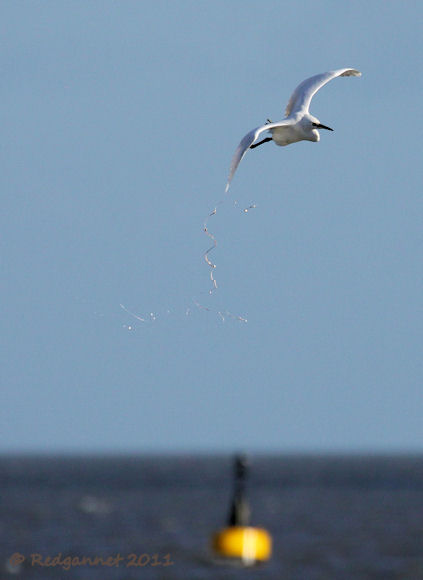 The tide was nearly up to the top of the dyke which made me think that a 6 meter tide at Oare is quite a substantial one. There was little to be seen out on The Swale, but a Little Egret, some Common Shelduck and a Eurasian Oystercatcher were seen from Sea Wall Hide. 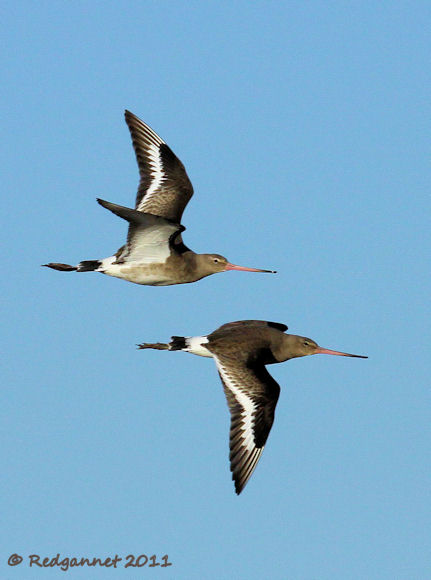 As the tide began to ebb, small parties of birds set out on sorties to see if any mud had yet become exposed. I positioned myself on the dyke where the birds would pass overhead and tried to get a few shots of them inflight. A delightful picture that presented itself but never quite came to be was the flying birds as they passed in front of the sunlit reeds. 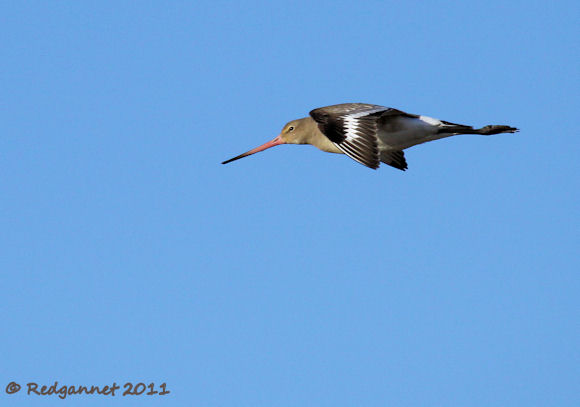 Dunlin, Golden Plover, Common Redshank and Bar-tailed Godwit passed over in small flocks and a few moments later returned when it was plain to them that the tide was still quite high. Sadly, each time they crossed in front of the reeds, the sun went in. 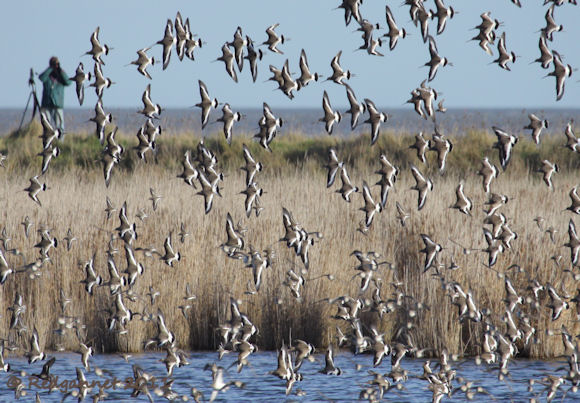 By luck rather than by minute calculation, the first piece of mud to emerge from the water was just on the other side of the dyke and less than 20 meters from where I stood. The birds responded quickly and very soon there was a mixed feeding flock following the rapidly receding water out into Oare Creek.

On returning to the car park by the launch ramp, I took a quick scan across towards Mockett’s. This is a low hill on the Isle of Sheppey, across The Swale. Above the western slope of the hill was a buzzard. Even with a scope it was very distant and I could not discern any plumage details, but Rough-legged Buzzard is often reported from that very spot during the winter. It was holding its position against the wind absolutely perfectly, but it was gliding rather than hovering. I will have to wait for a better sighting before including this one. 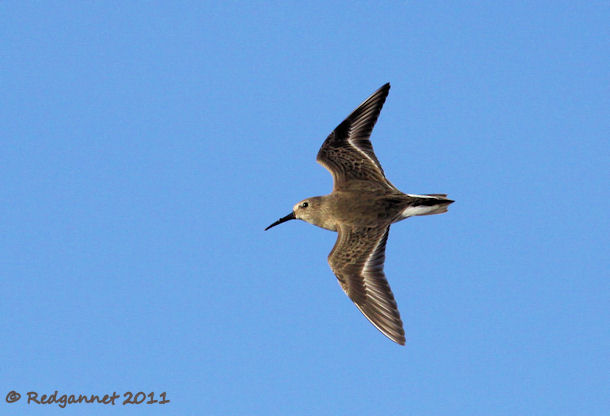 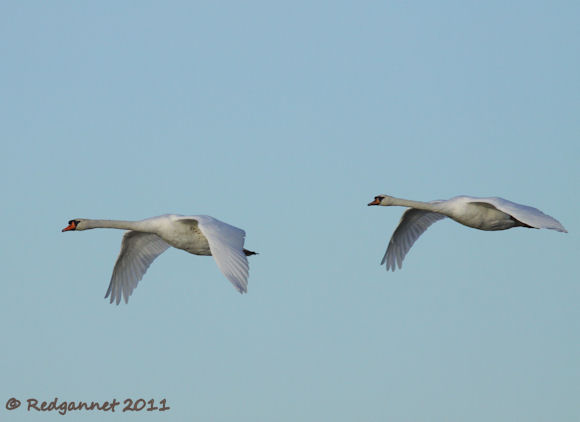 Visit the dedicated UK Page for other posts from Kent and the UK.﻿