In the Kruger National Park is a fantastic game viewing hide over-looking the excitingly named Lake Panic (Google Earth ref; 24 58 53S 31 33 58E). It has become known primarily for its birds, although on the last two occasions I have narrowly missed Lions and a Leopard. Its proximity to the Paul Kruger entrance gate and Skakuza Camp have made it especially popular and the restriction of only 8 cars in the car park at any one time is routinely ignored. 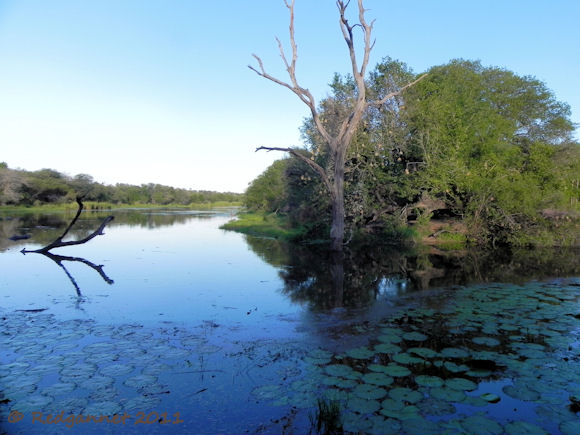 There is seating for about 20 - 25 people in the ‘L’-shaped hide, but it is not uncommon to find people standing at the back and even queuing out through the door, such is its popularity. And its reputation is justified, so much so that I want to single it out for its own posts, here and on 10,000 Birds. 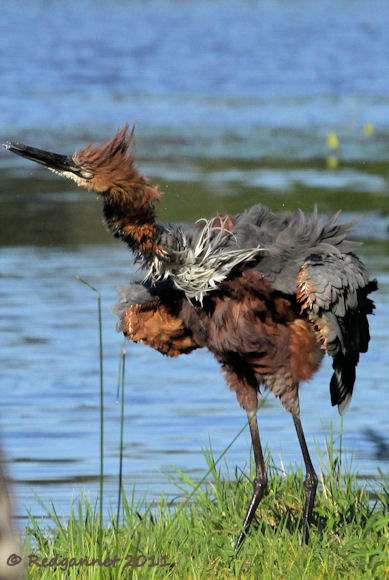 I had chosen to stop here during a very quick visit to the Kruger NP. Being only 9kms from the Paul Kruger Gate made it easy to time my departure to be out of the park by the allotted time. The stars of the show today were a family of Goliath Herons. An adult bird had been bathing and shook itself dry before having a nap. Meanwhile the juveniles stood close to the edge of the water, peering in, but at a loss what to do next. 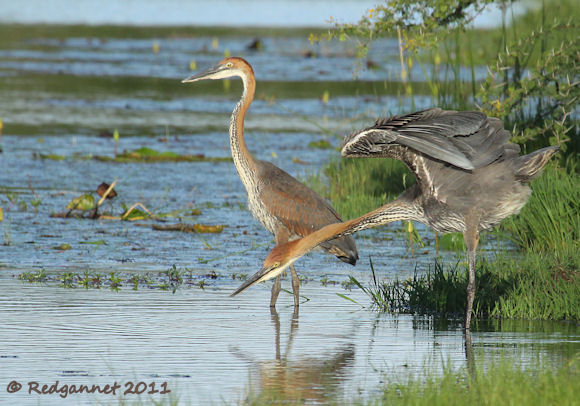 Eventually the adult bird re-emerged from its roost and regurgitated some food for its hungry offspring. A more detailed account will appear on 10,000 Birds soon. 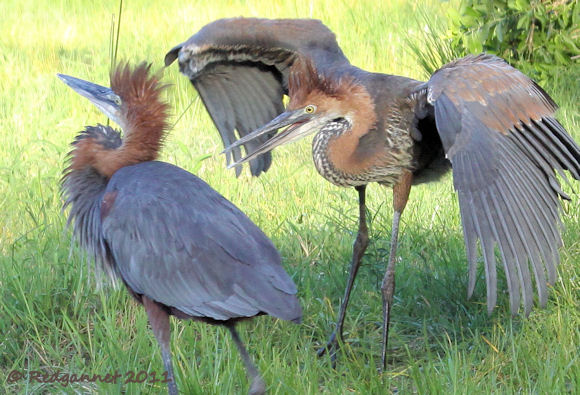 Immediately opposite the thatched hide is a large colony of weavers. There are two distinct nest shapes in the colony indicating that at least two species had chosen this site and were able to tolerate each others’ closeness. The majority appeared to be the Village (Spot-backed) Weaver. The rest of the nests were built with a slight entrance tunnel descending from the woven sphere. These were the nests of the Southern Masked Weavers. 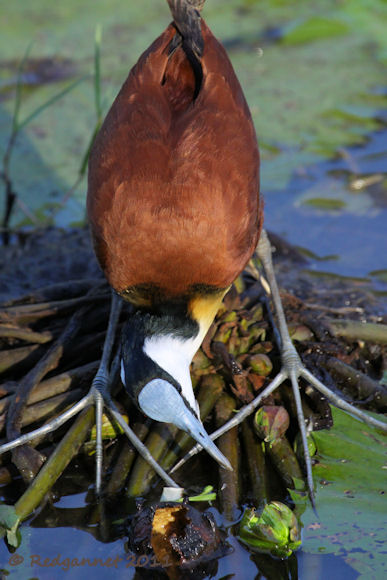 Very close in, lily pads supported African Jacanas, one of which was playing King of the Castle on a tangle of roots with a Black-necked Crake. Whichever one was currently the ruling monarch seemed determined to increase its defensive capabilities by dragging more weed and root stems onto the mound. Could this have been a prospective nesting site? It did seem rather exposed. 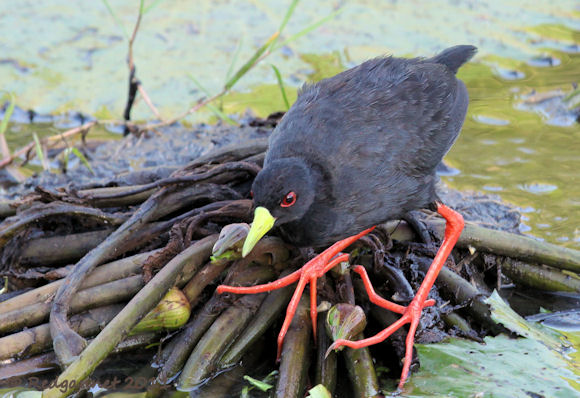 A Grey Heron stood gazing towards the sun with its wings drooped. My visit almost coincided with the austral solstice and I was put in mind of a Druid rehearsing for mid-summer. Close observers might notice the corrugations in the water as a Crocodile slipped silently through the pool behind the bird. 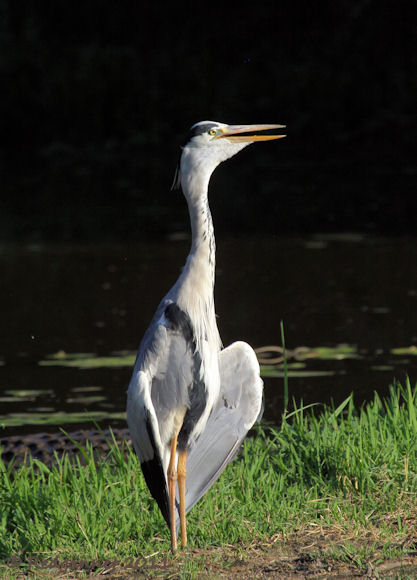 African Fish Eagles were calling with their distinctive gull-like shriek. They only came briefly into view as they came around the corner from the main body of water. Hippos kept their distance, but could be seen and heard as they rose in the water, occasionally raising a head to ‘yawn’. 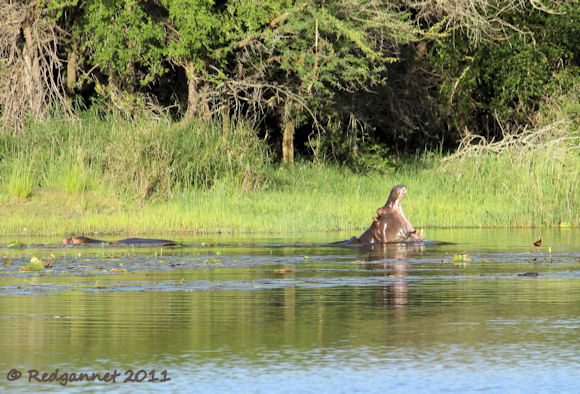 As the sun began to set, the hide became busier and busier with some visitors bringing picnic hampers. A leopard had walked by at about this time on the previous evening and was said to be a regular visitor to the area. I wondered if this might have been how Lake Panic had gained its name, but I am given to understand that it was so called because the engineer who designed and built the dam that contains the lake had a crisis of confidence during the first big storm. The Sabie River flooded and filled the lake while the engineer fretted for a day and a night. 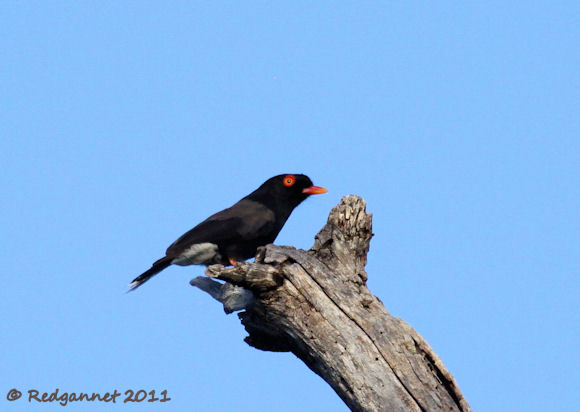 A dead tree in front of the hide was productive for less water-associated birds. As well as a non-aquatic Brown-hooded Kingfisher, a couple of Retz’s Helmet-Shrike stopped in the dead branches. The lake stretches around a corner and out of view beyond the trees. Along the northern bank Yellow-wattled Lapwings, White-faced Duck and Egyptian Goose can be seen.

In an attempt to achieve balance and fairness, I should advise you that other hides are available, dotted around the park, but in my limited experience, none so well placed and exciting as Lake Panic.