Another dip at the reservoir.

This morning’s outing in Hong Kong took me to the Aberdeen Reservoirs in search of Siberian Rubythroats. A skulky little thrush, the Rubythroat likes thick cover and can be difficult to see. In Hong Kong it is a winter visitor and one that I have continually missed during my seasonal visits here. First bird of the day was a Spotted Dove. 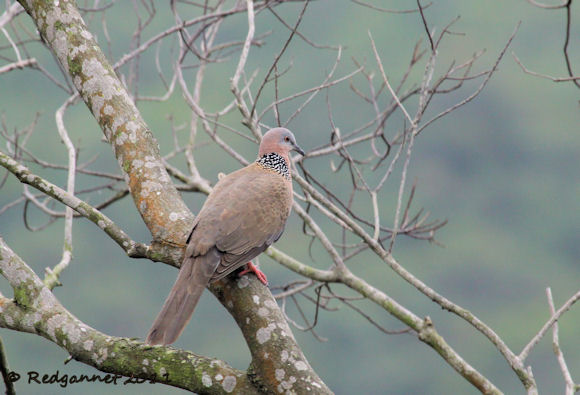 The sky was overcast this morning and the steep hill to the Country Park was tiring. I decided to go anti-clockwise today and follow the nature trail. This took me across the dam wall of the lower reservoir (Google Earth ref; 22 15’ 12”N, 114 09’ 38”E) where the first Black-eared Kites and Large-billed crows of the day were wheeling and calling.
The reservoirs are surrounded by steep, scrub covered slopes which should provide good cover for the Rubythroats. Other thrushes enjoy the scrub and the first drew my attention with a piercing whistle. It took a few moments to locate the bird, but I sat quietly in one of the many picnic sites, and a Blue Whistling Thrush eventually came out into the open. 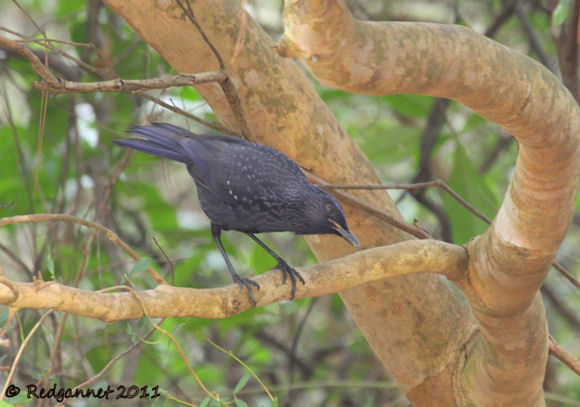 After a short while, a concrete water catchment ditch passed under the trail. It is not meant as a trail and there are warning signs to alert one to the dangers of sudden changes in water level. It was very inviting however and I took a little look along it. An alarm call from the bushes was followed by a virtuoso display of fluty whistling from a small flock of Black-throated Laughing Thrushes. I recorded a snatch and am trying to get it inserted into the post. Watch and listen to this space. 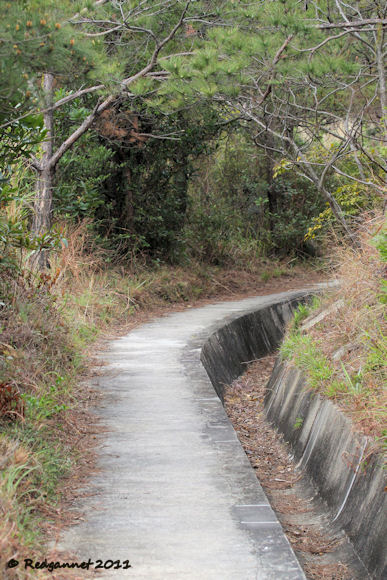 Another alarm call was more difficult to pin down. A lot of pishing eventually provoked a movement in the low growth and the head of a Rufous-necked Scimitar Babbler popped briefly into view. Another musical treat further along was probably a Hwamei, but it wouldn’t come up to be seen. 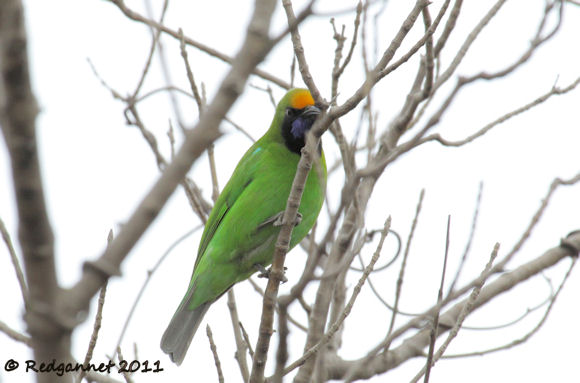 The ditch ran out after half a kilometre or so and I returned for a stiff climb up Lady Clementi’s Ride. For the puerile amongst you, this was another set of steps rising straight and steep up the hillside to a track running parallel to and high above the ditch. A Golden-fronted Leafbird flew in, gave me a song and flew out again. It is mentioned in the field guide as a popular cage bird in Hong Kong, but then described, rather generously, as “extra-limital” rather than as a likely escapee. My listing software has no truck with such a namby-pamby approach and denied me that one. It is included in the sightings list below to give a full account of what might be seen and in an attempt to pad it out a bit.

Back on the main path, I crossed the dam wall of the second reservoir and saw a few cages containing captive white-eyes. Hong Kong’s bird keepers bring them out to allow them to listen to the wild birds singing in the hope that this will improve the song of the caged bird. 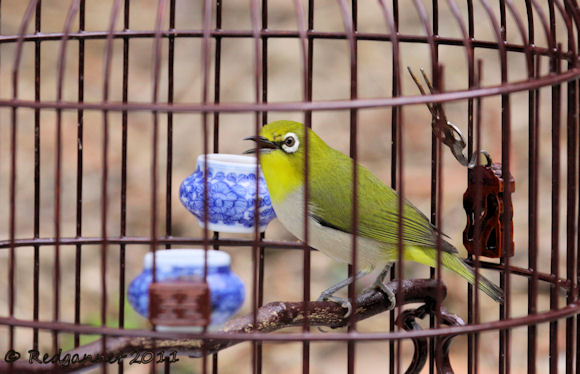 A set of steps leading down from the north end of the dam wall, runs along by the outfall from the upper reservoir. When the water level is low, a small open area is revealed where the outflow reaches the lower reservoir. The bank here is littered with holes that I think may have been made by crabs (?). A movement by one of them caught my eye. It was a Common Tailorbird, meticulously moving between the holes, searching for something to eat. I had not observed this kind of behaviour in a tailorbird before and was surprised at how close it allowed me to approach. 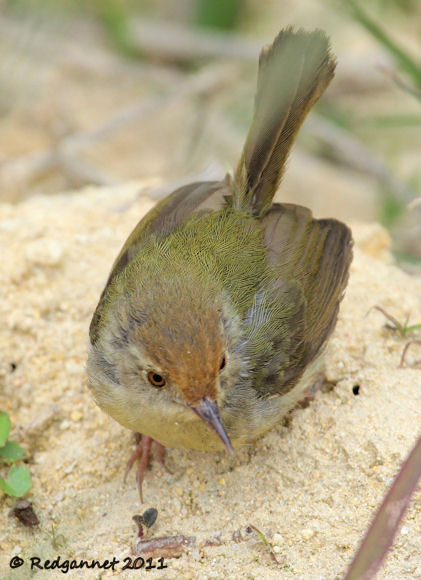 The comparatively short tail caused me to think of this one as a female and she would constantly flick out her left wing and leave it trailing as though injured. She could fly, but appeared content to let me come close as she continued feeding from the crab holes. I noticed later while checking the photos that her left eye looked infected. 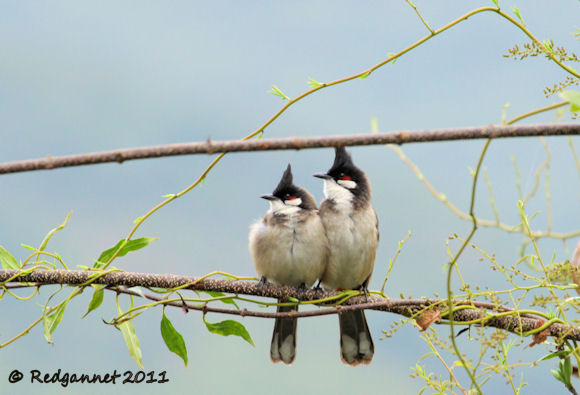 Back by the entrance, are a couple of feature areas for children, wheelchair users and picnickers. Here there were bulbuls. Red-whiskered Bulbuls were outnumbered by the Chinese, or Light-vented Bulbuls. The crows and Spotted Doves were very common here too. On the childrens’ walkway, a small flock of Olive-backed Pipits seemed very shy, but then surprised me by posing on a branch while I got an unexpected picture. 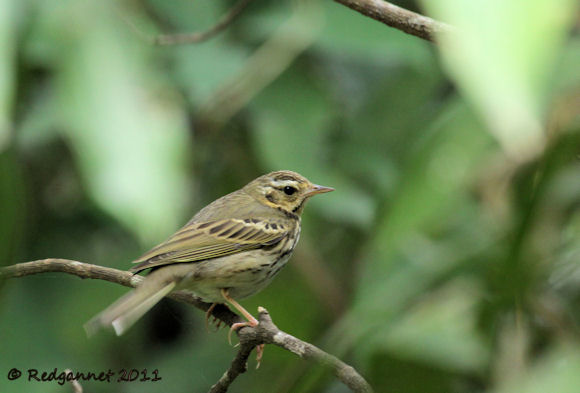 The reservoir attracts a lot of visitors for walking and Tai Chi excercises. On a weekend it is especially busy, but this weekday morning, away from the main paths, it was nice and quiet.
Bus no 72 and 72A leave from Hennessey Road opposite Sogo department store. Get off the bus when you see the water and cross the road by the subway. 200meters ahead, you will see the daunting incline of Aberdeen Reservoir Road. This morning, I took the Nature Trail and Lady Clementi's Ride to circle the lower reservoir. Trail maps and "You are here" up-dates are dotted frequently around the park so guaging one's position is relatively easy. 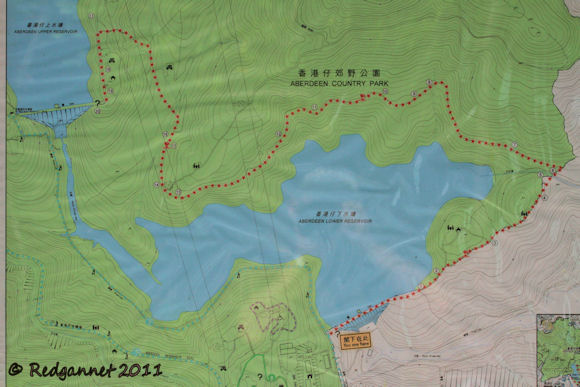