Today, I had all day to kill in Cape Town. An early start should have seen me at Kirstenbosch Botanical Gardens on the morning slopes of Table Mountain for opening time, but the rest of the suburbs had risen before me and were in front of me on the motorway into the city. I have not experienced any significant traffic in South Africa before and I was dismayed to see the day start without me as the sun’s first rays hit the top of the mountain and gently slid down into the gardens as I watched from behind a gravel lorry on the N2. The 40 minute journey took nearly 3 hours. 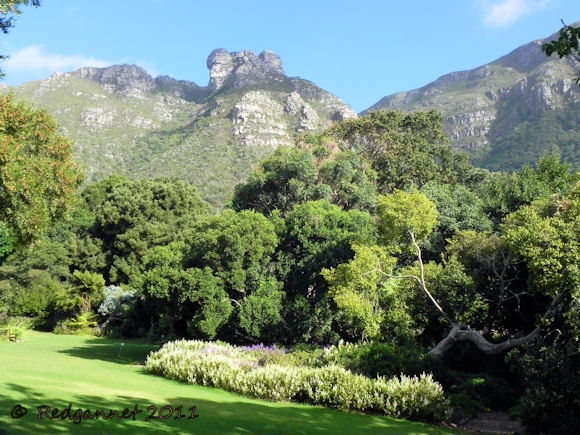 The gardens are truly beautiful and my frustrations slipped quickly away once I had paid my entrance fee and began seeing some birds. Cape Francolin was ticked in the car park and a couple of Egyptian Geese sat atop the café near the turnstile of the top car park. Helmeted Guineafowl fussed with their chicks on the first of the many lawns and a young Verreaux’s Eagle soared with the massif behind it. 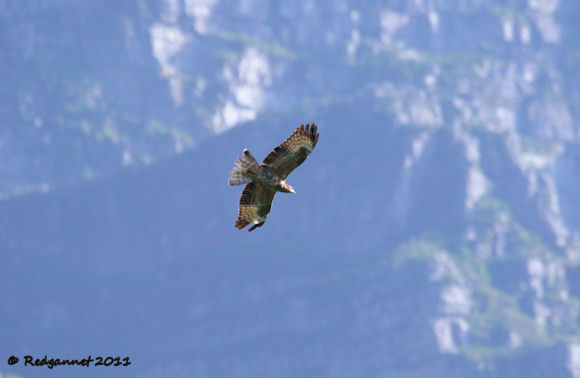 I wanted to move uphill to the protea and fynbos section of the gardens, but was drawn by bird calls and found a mixed flock feeding at the bottom of the slope. Cape White-eyes made up the majority with Cape Canary and Sombre Greenbul making most of the noise. 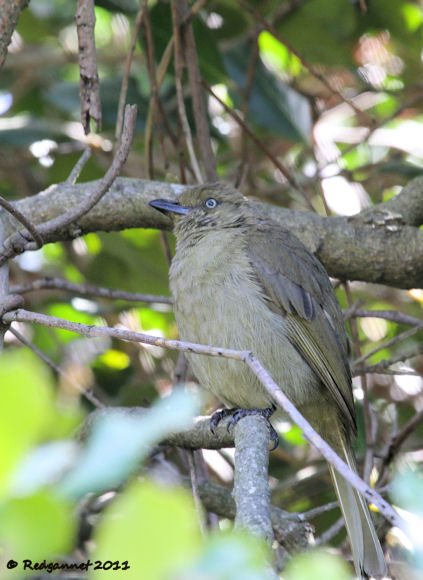 A tiny Muscicapa showed well in the sun and this time I paid more attention to the head. No streaks today, so this one must be a Dusky Flycatcher, though the underparts still look very pale to my tastes. 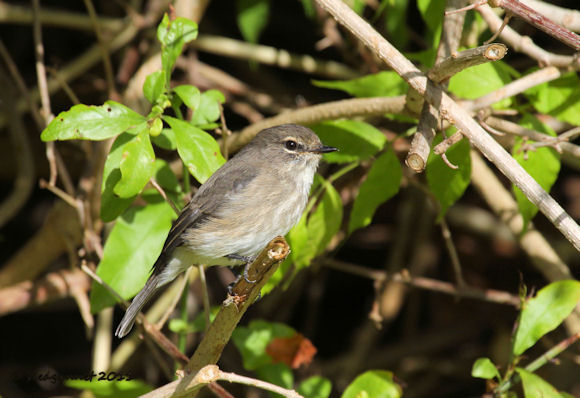 The protea and fynbos section of the garden is towards the top of the slope. Fynbos is the unique heath-like habitat that characterises the environment of much of the cape. It is very species rich with representatives from the grass or reed-like Restios, the heathy Ericas, the pincushion Leucospermums, and the magnificent Proteas. Such beautiful habitat and the high endemism make for a very rewarding birding experience. 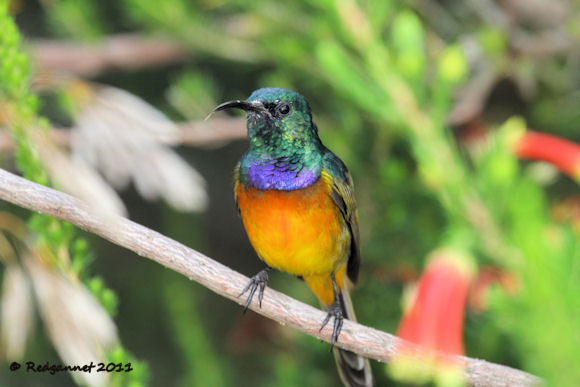 Please take the bracketed section below with a pinch of salt. I am leaving it in just to cause confusion and divide opinion. It is probably a load of old toot, but it shows the dangers of over simplification. According to Gordon Lindsay Maclean, 'Roberts Birds of South Africa', the breeding season for Orange-breasted Sunbirds is from February until November, peaking between May and August. How very Northern Hemisphere! So the stuff about eclipse plumage (not discussed in Roberts), is almost certainly rubbish too.

(My first bird amongst the Ericas was an Orange-breasted Sunbird. The one above was still sporting his summer togs. Sunbirds along with male ducks go through a transitional stage known as eclipse plumage. I am still trying to determine whether the individual below is a juvenile or an adult male passing through his eclipse stage). 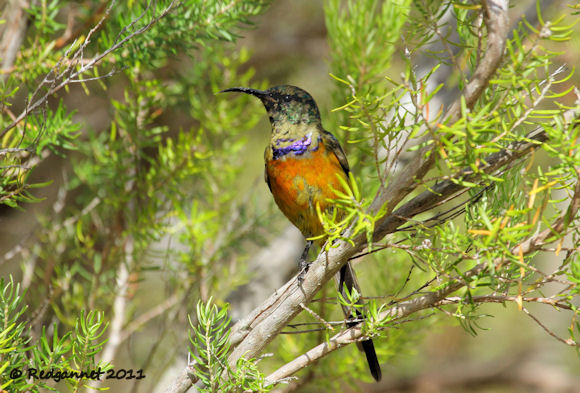 (It has the long central tail feathers, so I am plumping for an eclipsing adult but am prepared to take advise from anyone who can offer it.
Ducks lose all their flight feathers and their ability to fly during eclipse, not so the sunbirds from what I saw.) 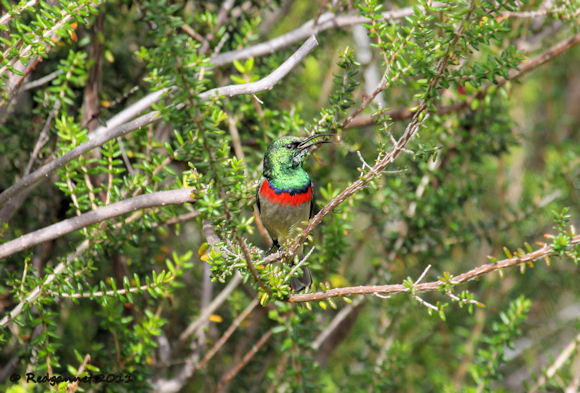 (A Southern Double-collared Sunbird retained his flashy plumage and was still calling as though the summer was barely started rather than waning into the middle of March).
See above; the breeding season for Southern Double-collared Sunbirds is from April until November.
He was very faithful to a particular shrub and a female came out to join him in defending the bush. Their frequent sorties back and forth made me suspect that they may have a late brood deep in the fynbos. 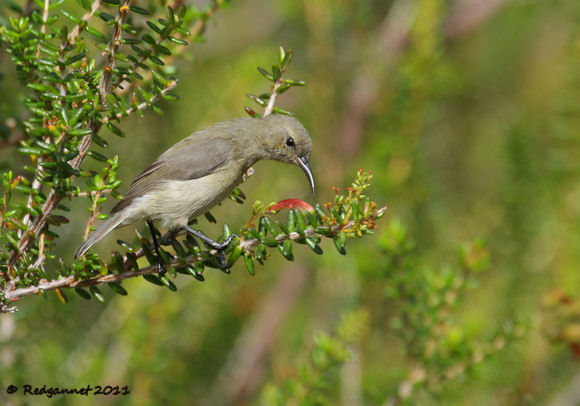 On the highest tier the Cape Sugarbirds looked down from their lofty perches. Height is important for a sugarbird I am tempted to think. A small bush on a high slope seems to outrank a tall bush lower down, so the proteas at the top of the gardens are the most popular. This male was splendid with his long tail and had some red staining on his head from his habit of flower dipping. 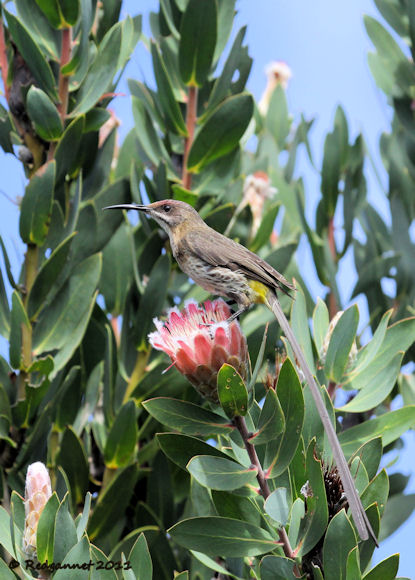 A patch of Restios was very prolific with small flocks of Orange-breasted Sunbirds on the seedy stems. A Cape Robin-chat cowered in the low growth and this female Cape Sugarbird must have chosen the background especially for the bokeh. 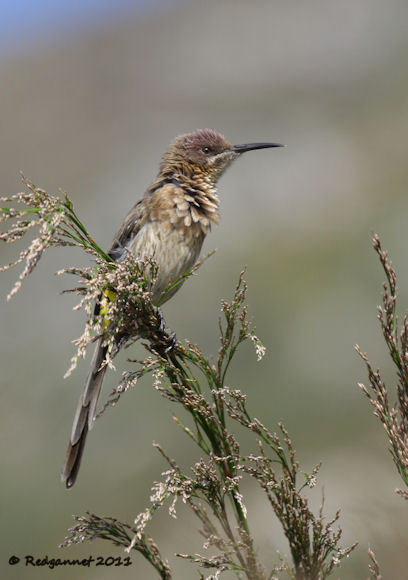 Trying to take pictures of swifts is a pointless task unless of course it is a warm afternoon, and there is a patch of soft, freshly mown grass in light shadow to lie back on. A flock of about 40 Alpine Swifts were feeding above gardens and I lay back to enjoy them with a small piece of carrot cake. After watching for a while, I noticed that they would occasionally stop flapping in their pursuit of insects and cruise for a moment or two. Perhaps they had just caught something to eat and were swallowing it, but it gave a moment of predictability and a chance to get one in the camera sights. I still maintain that the effort taken outweighs the reward, but it is the only picture I have ever managed of an Alpine Swift (actually, there are two pictures in one). 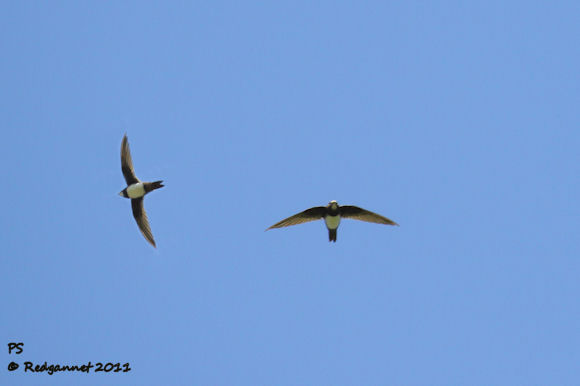 An area of large trees along a stream is known as The Dell. It is in a deep depression at the centre of the gardens. I was still on my way down and stopped at a bench overlooking the well wooded Dell. I am not given to superstitions, but I do have one slightly weird practice; if ever I sit on a bench dedicated as a memorial to someone, I will acknowledge that person. The bench was in memory of a Rob James and I nodded to him as I sat down and asked if he had seen anything. At that very moment, my eye fell on a large shape in a tree. 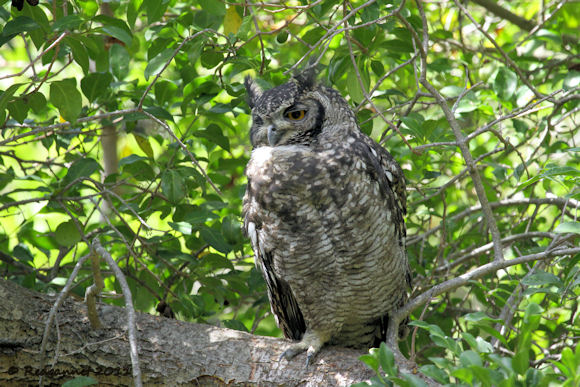 Sitting out in the open, entirely exposed, was a Spotted Eagle Owl. “Ooh, look Rob.” I was conscious that I was having a conversation with a bench, but strangely, it didn’t seem inappropriate. I called the attention of another couple with binoculars who looked like birders and within a few moments, a crowd had gathered to see the owl. 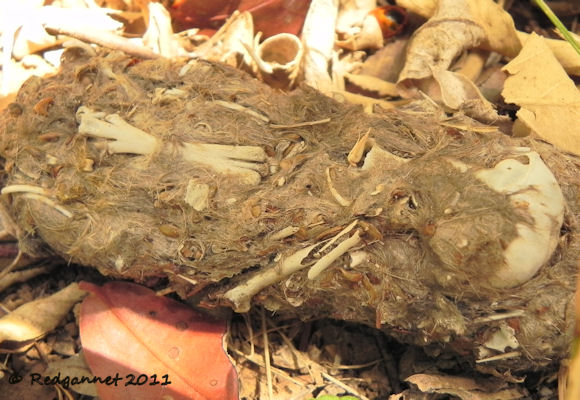 A passing gardens guide told me that the owls (note plural, for the mate was further along the branch in a leafier spot) were often to be found in and around The Dell and that they had nested in the large tree just behind Rob’s bench. To my amazement, the owl allowed the crowd to come within about 3 meters to take pictures with their phones. Whilst I tutted to start with, the owl seemed so non-plussed that I couldn’t resist the opportunity. 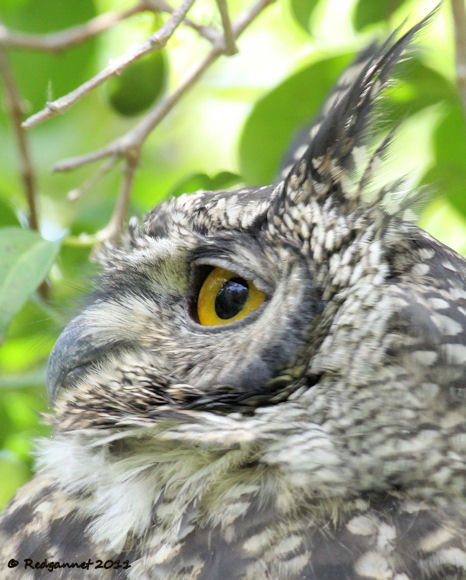 A very classy restaurant near the main gate was filled with very classy customers in suits, and shiny shoes. I wanted to stop in for a drink, but a Malachite Sunbird caught my eye just outside. It was feeding from low flowers right by the restaurant’s veranda and I had to get down low on the path to get a good angle. I couldn’t help noticing the diners regarding me suspiciously as I sprawled across the fancy brickwork. Actually this happens quite a lot, but I felt uneasy joining them for lunch afterwards, so straightened my birding silks, brushed myself down and called it a day at the gardens. 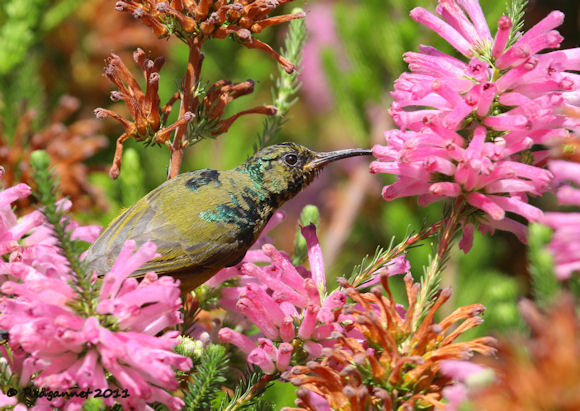 Kirstenbosch Botanical Gardens are sited on the eastern slopes of Table Mountain, off the M63 Rhodes Drive (Google Earth ref; 33 59' 16"S 18 26' 08"E). The gates open every day from 08.00 until 19.00, but close one hour earlier during the austral winter from April to August.
If the gate is not yet open, early arrivals can explore the small area of forest on the right as they approach the upper car park.
The entrance fee is RSA 37 (@ RSA 11 =£1). Toilets, gift shop and cafe are all available.
Most of the birds below could have been seen in a couple of hours if I didn't keep stopping for pictures and carrot cake.
Species seen; 32