Standby always leaves me in a quandry. We have to cover for our colleagues who may be sick, or caught in traffic and take on their duty with only 45 minutes notice. Of course I have to pack for different climates and trip lengths of up to 9 days, but more to the point, which field guide do I bring? Will I need the scope?
The call came for a trip to Dubai and we arrived at the hotel there at mid-morning the next day. The Sibley guide to North America, packed in anticipation of a trip to the east coast, for the first time in its life, proved useless. 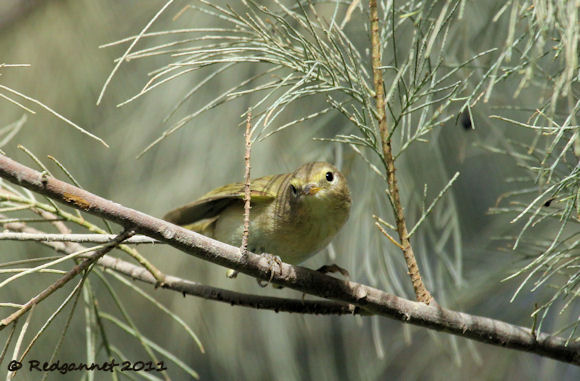 Considering the timing and the preparations I had had a chance to make (none), I opted for the easy choice of a nap and then an afternoon in Safa Park. It was a quiet visit, but still better than the thought of hanging on the telephone at an airport hotel in London.
There is a post describing the logistics and workings of the park on a previous post, 'Safa Park, Dubai.' On this occasion I was able to use the Dubai Metro which has a station called Business Bay within a 10 minute walk of Gate 5 at the park's south-east corner (Google Earth Ref; 25 10' 58"N 55 15' 02"E). I paid the required AED 3 (@ AED5 = £1) and the park was open to my watchings until 23.00. 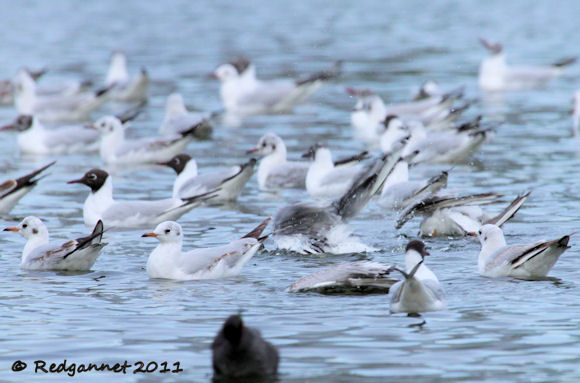 Slender-billed Gulls are winter visitors to Dubai and I hoped that I might find one or two mixed in amongst a flock of Black-headed Gulls that were bathing on the fenced-off, bird sanctuary lake. The two species have a similar look in-flight and when in their winter plumages. The Slender-billed Gull is slightly the larger of the two and usually only has one small mark behind the eye. It is better defined than the smudgy marks of the Black-headed Gull and is often absent altogether. The bill is not actually especially slender as the name might suggest, but it is longer and darker than that of the Black-headed Gull (those of us who carry a few extra pounds are well aware of the slimming properties of dark clothing). Once the summer comes, the Slender-billed Gull stands out by maintaining its white head while the Black-headed Gull fulfils the promise of its name by developing the dark (actually brown, not black) head. 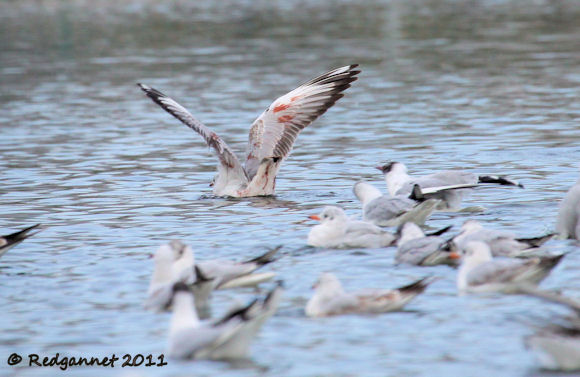 One individual struck me as strange as it flew in. It was marked with red smudges that may have been a result of staining, but the positioning of the marks made me wonder what the bird had been doing to achieve that pattern. Ideas on a postcard please. 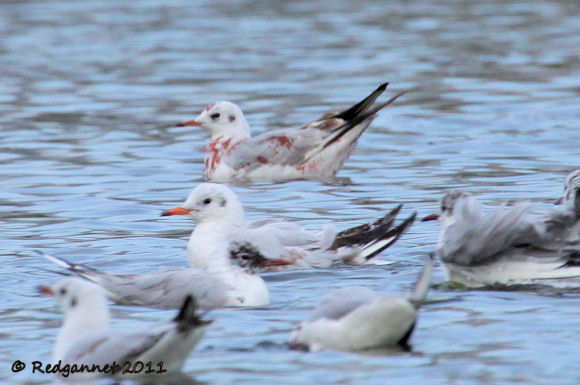 With the two species sharing characteristics, habits and habitats, it seemed like a fair bet that there may be a few mixed in with the flock, but try as I might, I could not make a Slender-billed Gull out of any of them. 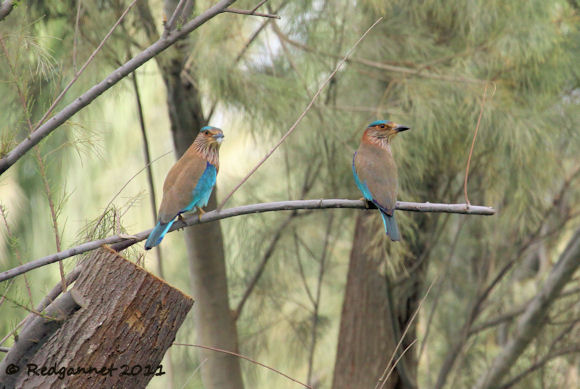 The Indian Rollers were still an obvious feature of the park, but as on the previous visit, they would not allow close approach and I had to be satisfied by admiring them from afar. 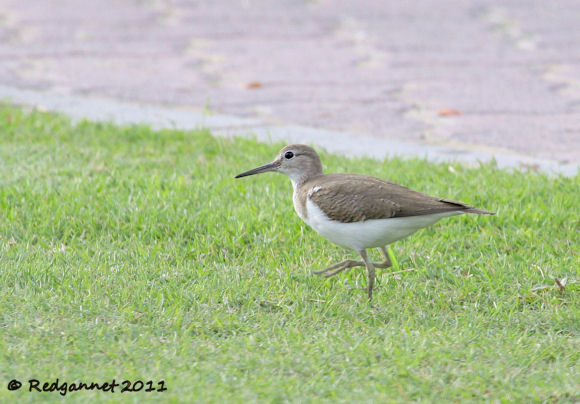 A canal, with a rocky bank on one side, runs from the waterfall to the boating lake in the centre of the park.
My previous visit had found this to be a productive spot for a few common waders. Today, it held Common Sandpiper and Red-wattled Lapwing. 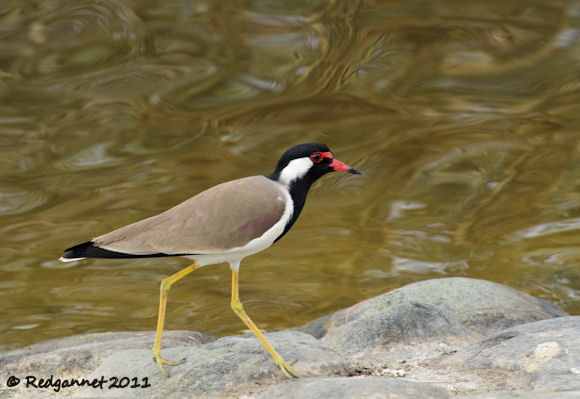 In the trees surrounding the canal, I was following a few small warblers which proved to be Chiff Chaff. Relying on plumage and 'gizz' rather than than song took a little longer than it should have done until I got a good look at the dark legs in the photo below. 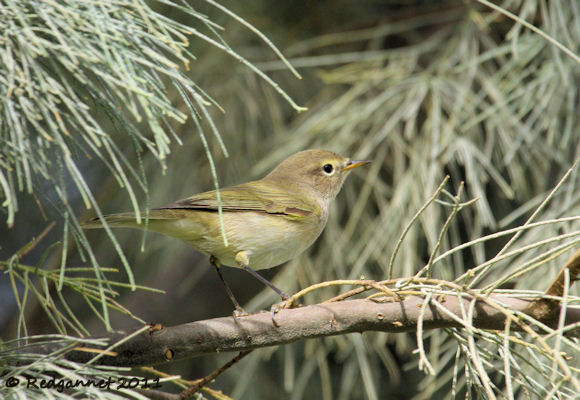 The green wash showed up strongly in the sunshine, but was much more muted when the bird was in shadow. 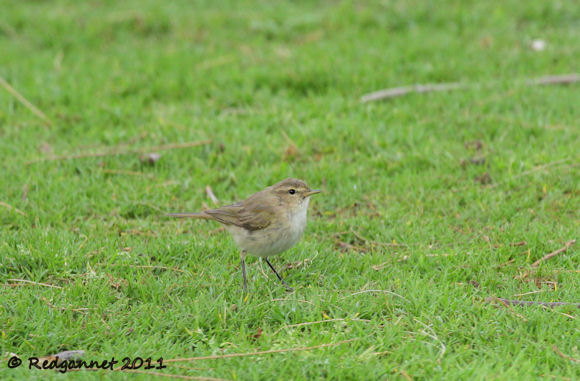 No trip to a Middle-east park would be complete without a look at the Hoopoe. There were plenty of birds around, picking in the soft turf of the communal lawns. This one flashed its erectile crest briefly as it landed. 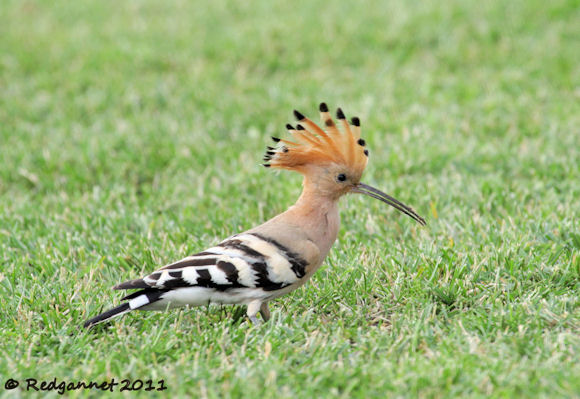 If you are better placed than me and get more than 45 minutes to plan your trip to Dubai, may I recommend you to a site which can offer a selection of sites and advice for the region; http://www.uaebirding.com/birdingsites.html
Species seen; 21