The Viking Coastal Trail runs from Reculver Towers along the Thames Estuary, eastwards past Margate, rounding the headland and passing Broadstairs and Ramsgate before cutting back inland at Cliffsend. There are proposals to continue the path from its current end at St Nicholas-at-Wade and close the circle back at the twin towers of Reculver (Google Earth ref; 51 22 46N 01 11 58E).
Don't imagine that I covered the current 47 kms, I just thought a bit of the back story might be interesting in case you fancied an afternoon out in East Kent. 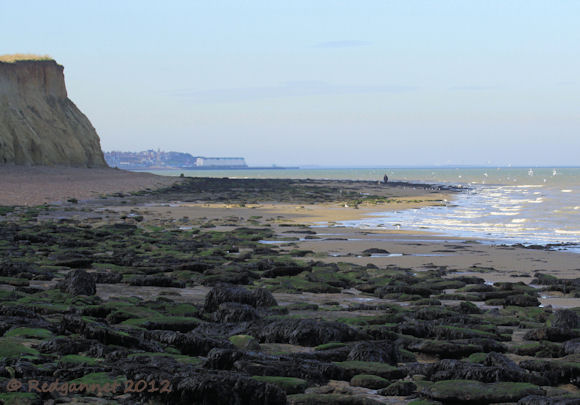 I had gone on the look for Snow Buntings. A post from here last year, offered a very poor view of the bird and I made a promise to come back and try again. So here I am.
I started towards the west dropping down onto the beach hoping to find some waders along the shore. A few Black-headed Gulls were seen with a small flock of Sanderlings and a single Grey Plover. 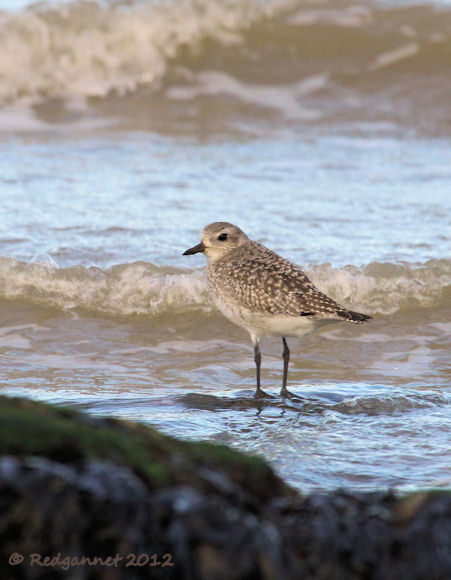 A dog-walker spoiled the view by running his dog along the water-line and spooking all the birds.
I passed the towers on my way back to the east and met a couple of birders, Ed and Val, who were also on the lookout for Snow Buntings. Together we walked along the dyke path, noting plenty of Common Redshank, Ruddy Turnstones and a few Goldfinch.
Up ahead a small restless bird on the low wall bordering the path proved to be a Black Redstart which we saw a couple of times, but which kept its distance. The wave and tide action has swept the shingle beach into tiers, affording a little privacy to a Eurasian Oystercatcher. 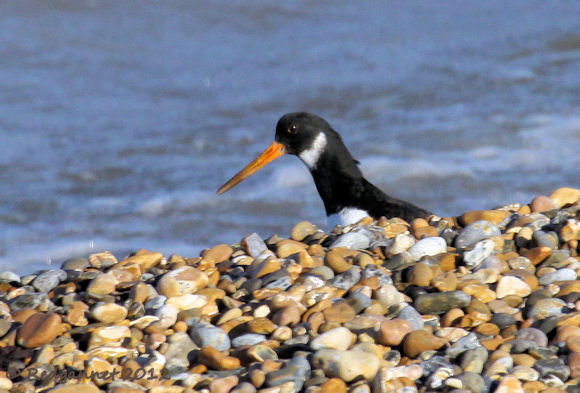 Ed was calling birds from out on the estuary, Red-throated Divers, Great Crested Grebes and some Brent Geese. There were some Common Shelduck and and a few gulls too. Ed and Val turned back after a while without having seen the buntings, but they did give me the heads up about a Bittern which had been showing well at Leybourne Lakes. I continued on and beyond Plum Island before heading back.

I spent a short while sea-watching from the shelter of the twin towers and saw what I thought might count as a Black-throated Diver. It was very distant and I could not make out the shape of the head or the bill angle, but the distinct white flash to the rear of the flank gave me serious cause for consideration. I am not at all experienced at sea-watching so I sought advice but was not encouraged in my ID which will remain in pencil. No other reports of a Black-throated have been filed for the area and there were plenty of Great Crested Grebes and Red-throated divers to confuse the mix.

Visit the dedicated UK page for more posts from the UK
Posted by Redgannet at 23:22