The elasticated waistband on my camouflage trousers is working at full capacity since my most recent weight gain incident, so the cycle ride to Great Falls Park gave me the opportunity for a low-impact workout. Apart from stopping half-way for a Snickers, muffin and Coke breakfast, the regime is working well. 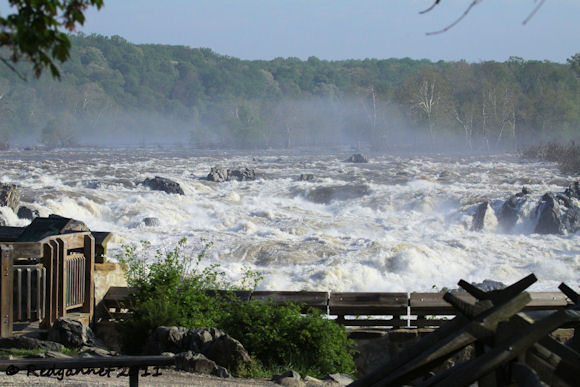 North Virginia was lightly leaved in the last week of April and the temperature was very pleasant for the gentle ride, mostly downhill, towards the river. A very amiable ranger charged me the $3.00 entrance fee and made the remark that I was obviously “from the airline”. I patted myself down to see if I was wearing a name badge to give myself away, but since I seldom wear it with my uniform, the odds that I had inadvertently clipped it on to my birding silks were low. Apparently, it is a popular destination for airline cyclists. Who knew? 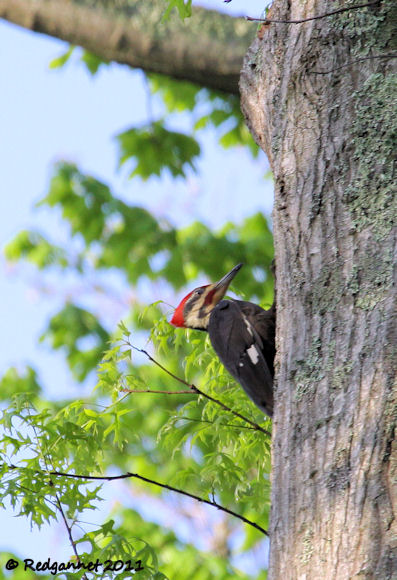 He kindly offered to keep an eye on the bike while I looked for birds and I started in the picnic area/car park around and to the right or south ( Google Earth ref; 38 59’ 37”N 77 15’ 16”W).
The loud drumming from a Pileated Woodpecker drew me across the damp grass where I stopped at a picnic table and began scanning. There was a lot of bird activity here and the first thing to catch my eye was a Great Crested Flycatcher at the top of a late-leafing tree. A Rose-breasted Grosbeak flew in to the same tree and, shortly afterwards, a Baltimore Oriole. When a Scarlet Tanager suddenly appeared, it felt as if I had hit the mother lode. 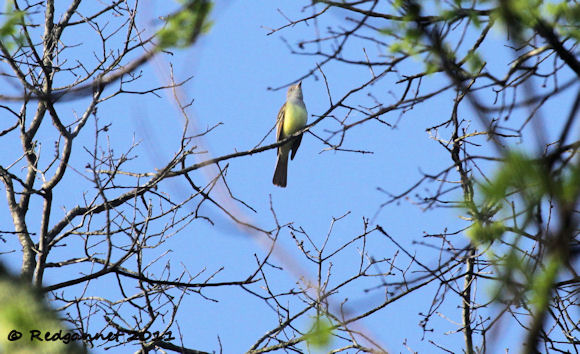 Chipping Sparrows were singing with a long, drawn out trill and the shorter bursts from the Northern Parula gave me my first Warbler of this year’s campaign. It was warblers that I was primarily hoping to find, with the theory that the river may act as a slight hurdle or a funnel to concentrate the birds. The Potomac is not very wide here and is pinched at the rapids, but the migrants may prefer to skirt along the bank, which heads predominately north just here, rather than cross immediately. As far as theories go, it was the only one I had, so it formed the basis of my day and the results were looking good so far. 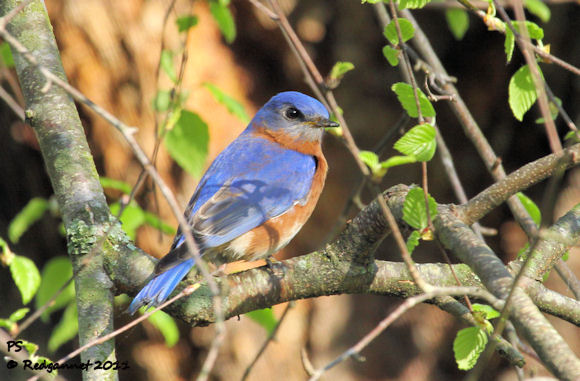 Residents of the park were also out in force, the Red-bellied Woodpecker, Carolina Chickadee and Eastern Bluebirds were all feeding voraciously. Turkey Vultures and Black Vultures had been raiding the dustbins which had been well filled after Easter Sunday picnics (bravo to the picnickers of Fairfax County whose litter was, without exception (apart from the aforementioned raids by the vultures), in the bins provided). 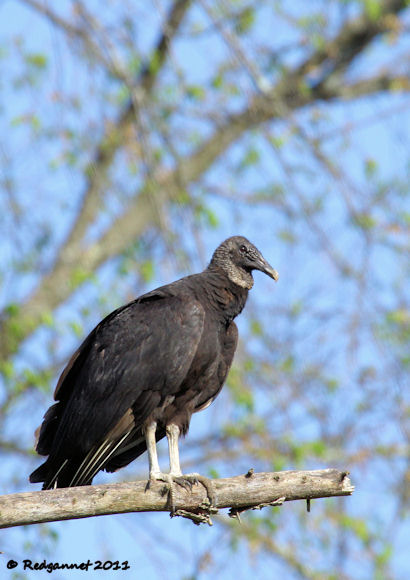 I had reached the river now and the levels were a little higher than my last visit. The roads had been wet this morning and the ground was soft underfoot. I assumed that it must have been wet during the night. Perhaps this had knocked a few of the migrants down into the park, but I have no idea how much rain fell. 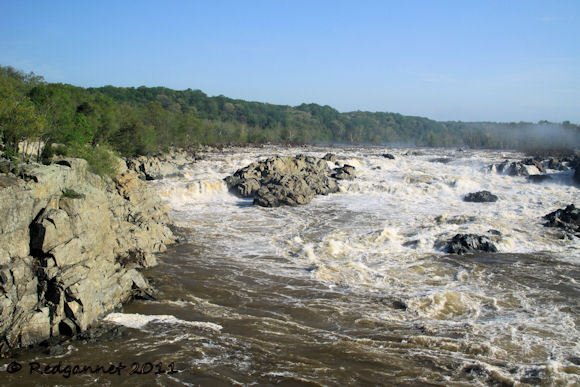 Bird song drew me back inland and a little yellow head, with what might have been a black stripe through the eye, ducked back into cover. Could it have been a Blue-winged Warbler? The sighting was so brief and unclear that I was reluctant to take the lifer, but retrospectively (this post is written after returning from the second part of my itinerary, Boston, where I became more familiar with Blue-winged Warblers), I will. 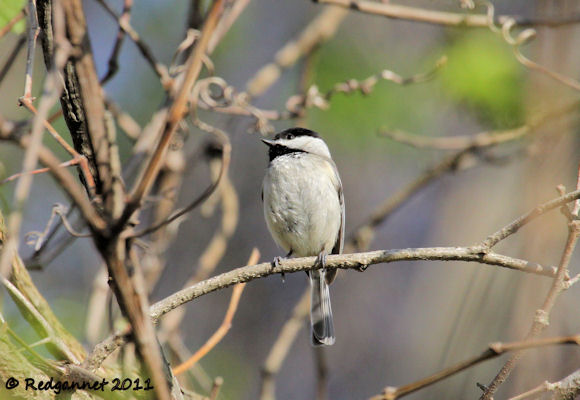 I began working upstream and passed a nice flock of Carolina Chickadees, one of which sat still just long enough for a picture. Carolina Wrens were much in evidence too. I had been hearing their calls all morning, but did not see one until I sat down to wait for another picture.
A pair of Blue Gray Gnatcatchers had built a nest in the fork of a tree, about 8 metres up. They kept leaving and returning to sit for a few moments at a time without really settling. Perhaps they were in the final adjustment stages and were trying it for size and fit. The nest on its own would have made an underwhelming photograph as it was perfectly blended to its surroundings. Only when the bird was in it did the nest become apparent. 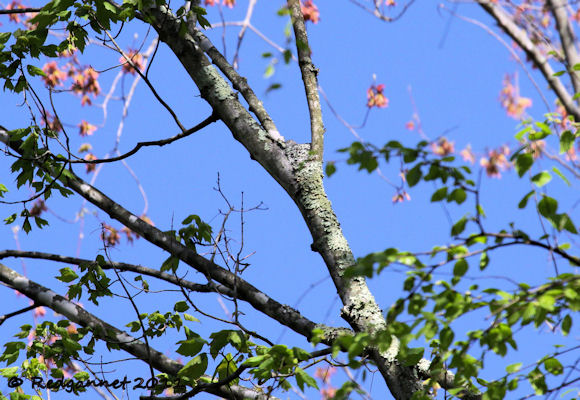 I had seen a Bald Eagles’ nest across the river on my previous visit and was pleased to see that this time, it was occupied. Last time, I had seen something white protruding from the nest, but it did not move for a significant length of time (it could have been guano or the lighter wood of a broken bough, for example), but on this occasion, it was definitely an eagle. There was nothing else that I could see that may have explained the white thing in the nest before, so it may now be safe to assume that it could have been an eagle then. 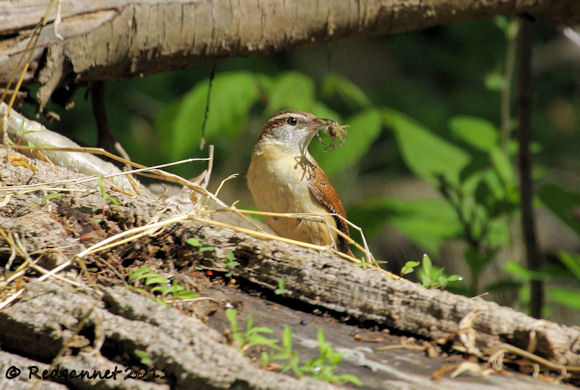 Another Carolina Wren was seen collecting food and darting into a tangle of roots and low growth at the base of a fallen tree, so the season is obviously gathering pace. 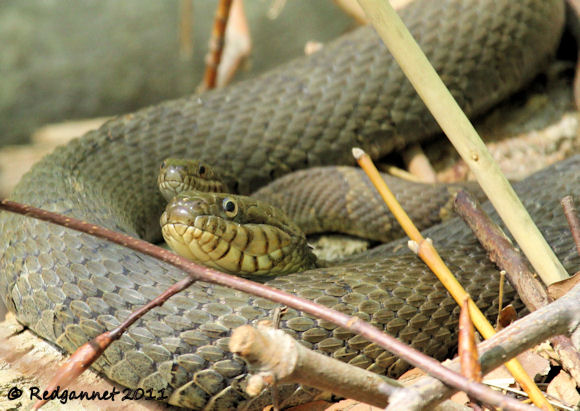 I was not looking forward to the return cycle ride. Being mostly downhill on the way to the river meant that the hard work was ahead of me. I reluctantly turned back downstream to start home when a sudden movement caught my eye. A Northern Watersnake was sunning itself at the top of the jumbled remnants of a fallen tree. It jerked as I watched, which had been the movement that had caught my eye in the first place. I moved around to get better light direction and saw that there were two snakes. Possibly they had been making little snakes. 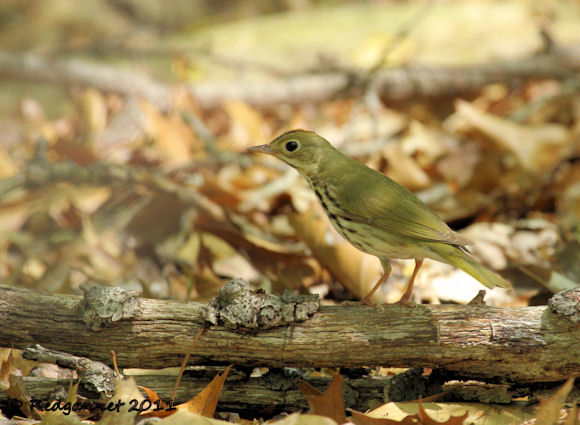 With the Blue-winged Warbler rejected (but subsequently re-instated), this was the highlight of the day and the journey back was not now looking so onerous. I even stopped on uphill stretches losing all my momentum to find more Pileated Woodpeckers and the season’s first Ovenbird.

To cycle from Tyson's Corner, head north on International Drive. You will soon pass under the 267 Freeway and then cross an odd junction leading into Spring Hill Rd. After about 1.6kms you will reach a crossroads with a gas station. Turn west (left) onto Old Dominion Dr and follow this for 4.3kms. At the junction, Great Falls Park is sign posted immediately ahead and is about 1.7kms into the woods here.
The roads are well paved, but are a little narrow. The trails in the park by the river do not have a hard surface, but were easy to cycle on.
There is more uphill on the way back and it took me approx 45 minutes to return to Tyson's Corner.
There is no taxi rank here. If you wish to visit by taxi, you should arrange a return ride.

Other posts from this destination are linked below;