The seed of doubt had been sewn and despite a completely attack-free day at Costanera Sur, personal security weighed heavy on my mind. I preferred to leave the tripod behind again as I would be travelling on the train, an activity that drew a slight shriek from my Argentinean colleague.
The journey took around 30 minutes and included today's first lifer. The Corscoroba Swan is unmistakeable, even from distance at speed. Shortly after leaving Retiro Station (Google Earth ref;  34° 35’ 29”S 58° 22’ 28”W ), the train passed a horse racing track with a couple of weedy lakes inside the rails. 4 Corscoroba Swans floated gently in the early morning light. 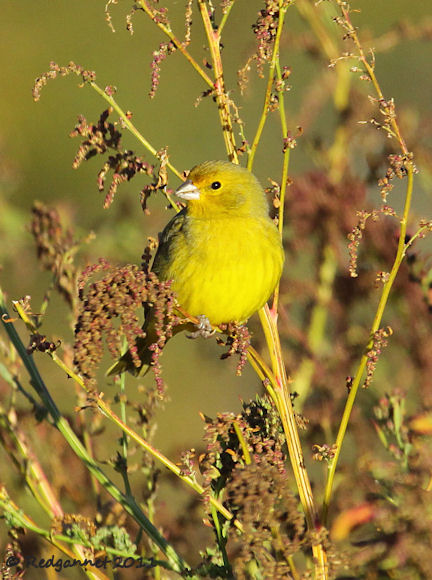 Dawn was around 07.15 this third week of May and my intended site at Ribera Norte opens at 09.00. Acassuso station (Google Earth ref; 34° 28’ 47”S 58° 30’ 14”W) is the 9th on the line from Retiro towards Tigre and a 30 minute walk from there should see me at the reserve.
Everything worked well and I arrived, unmolested, in the vicinity with a little time to spare. There is access to the river just south of Ribera Norte and I spent the time with Saffron Finches, White-crested Tyranulet and a raptor identical to the one that I had called Red-backed Hawk yesterday. There were many Picazuro Pigeons and the gimme birds, Chalk-browed Mockingbird, Rufous-bellied Thrush and Rufous Hornero had all been ticked by the time the gate opened. 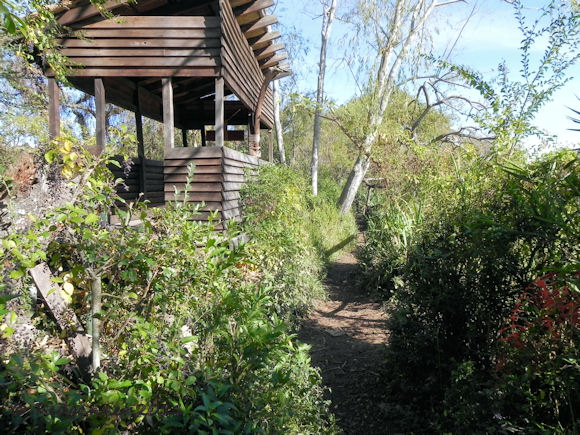 The track in Ribera Norte reserve describes a circle around a central weedy and reedy lake, passing through willows and woodland. One spur path leads down through the riverside rushes as far as the shore. I set off in an anti-clockwise direction and quickly came to a rustic hide looking out over a small patch of open water. A Rufescent Tiger-heron flushed into a low tree on my approach, but the rest of the waterbirds seemed unconcerned. I watched from the hide for a while, noting Common Moorhen, Spot-flanked Gallinule, Brazilian Teal and Speckled Teal. 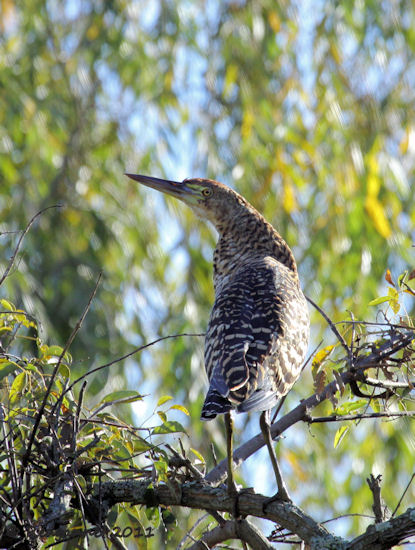 The hide is open-sided and open-backed allowing an all-round view. A pair of White-tipped Plant-cutters fed from a berry bush behind me. The antshrike-looking female, confused me for a while until the male showed himself and gave me a clue. 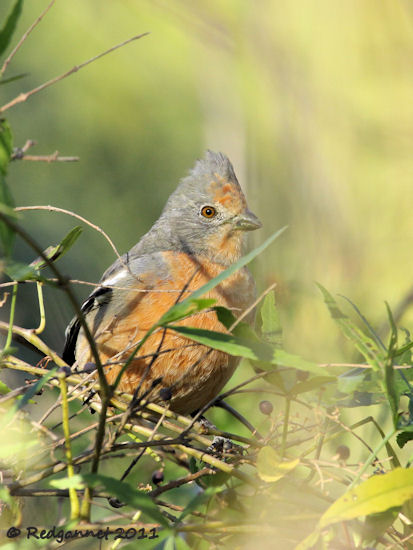 A small, metal, bridge crosses some boggy ground and a couple of White-tipped Doves and a Great Kiskadee perched on the railings.
Beyond here the woods became fairly thick and the under-storey was dense. A Grey-necked Wood-rail picked its way along the path before ducking into cover when it saw me. This area proved to be a real hotspot with Black and Rufous Warbling-finch, Rufous-collared Sparrow, Southern House Wren, Chequered and Green-barred Woodpecker and Red-rumped Warbling-finch. 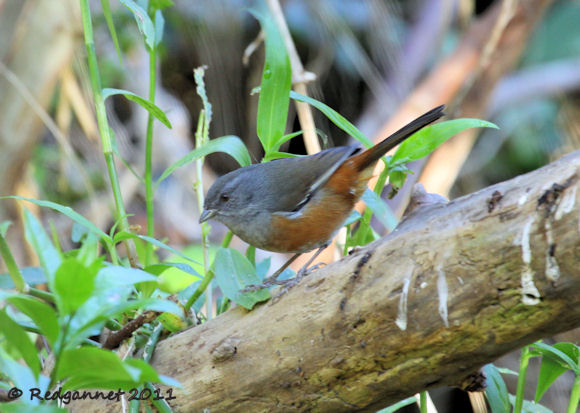 A lot of large pigeons were roosting in the tops of the dead trees. Most of them were Picazuro Pigeons, but one in particular caught my eye and closer inspection revealed him to be a Spot-winged Pigeon.
A couple of Hummingbirds had been buzzing around this morning, but it was difficult to get enough details to know where to start looking. Its bill was quite substantial with a dark tip and its back was brassy green. Eventually I found one sitting and was able to match it with a Gilded Hummingbird from the field guide. 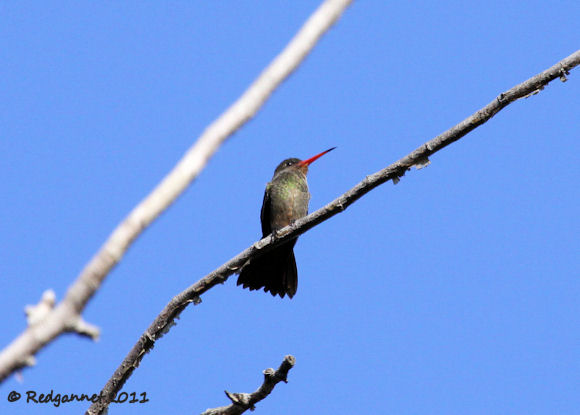 The spur leading out to the river was quiet with only a couple of Neotropic Cormorants and some Grey-headed Gulls to show me. This might have been the prime site to look for the Scarlet-headed Blackbird, but I have to save something for next time. 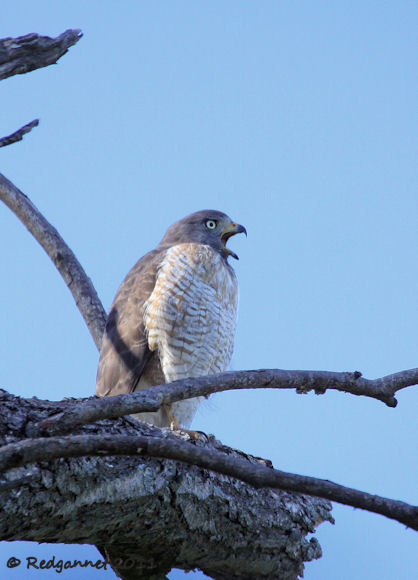 Back on the circular path, a Roadside Hawk watched over a clearing from a high tree. Another hawk flew from close by and may have been a parent bird. The first one had a pale breast and the flushed bird called for it to follow.
I had been seeing a lot of Monk Parakeets and was trying to block out the raucous calls and shrieks from this noisy bird. A slightly less grating, but still strident call drew my attention from the hawk, just in time to see two Yellow-chevronned Parakeets fly from a snag above me. 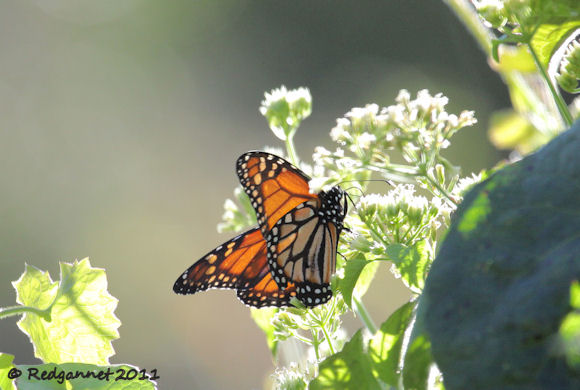 The clearing allowed the sun to light up some butterflies and I wonder if this is where the idea for stained glass windows comes from.
I had almost come full circle and decided to go round again in the opposite direction, intending to return to the hide and spend a little time there. On the return walk, a small flock of Solitary Caciques belied their name as they stopped in a tree above me.The reserve is only about 25 acres, 10 hectares, in size so it doesn't take too long to complete a full ciruit and I had almost finished my second when I came across a Green-winged Saltator. 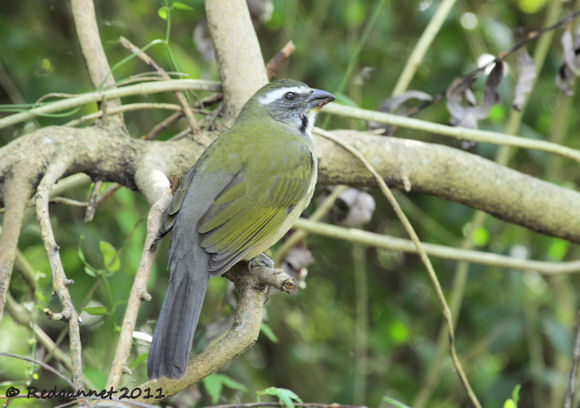 Back at the hide, a Cocoi Heron sat atop a small tree, a Green Kingfisher flashed across the reeds with a fish and a Ringed Kingfisher almost landed on a snag in front of me but saw me and changed direction at the last moment. A family of Coipu swam with their tails raised out of the water, appearing to feed on the floating weed that matted the surface. I had come to Ribera Norte hoping to find more waterbirds, especially grebes and coots, but had not been very successful. I knew that there was a large body of water adjacent to the reserve and hoped that this might be more productive. I could not find an access point to the water, but found Chimango Caracara, Southern Lapwing, Picui Ground Dove and House Sparrow to bolster my sightings for the day.

From Acassuso Station on the Retiro – Tigre Line, follow Peru St. north-east towards the river. Peru St. is staggered to the right as it crosses Avenida del Libertador and reaches the river within 10 minutes walking. Cross the Tren de la Costa light rail line, turn left and continue for three blocks. Ribera Norte is in to the right. It opens from 09.00 ‘til 17.00. Entry is free but a donations box is available to support the reserve. I only saw one other visitor here today and encountered no threatening behaviour during the walk through a pleasant residential area from and back to Acassuso Station. It had been my intention to walk, but thinking back, there were no taxis evident at the station nor did I see any in the area. 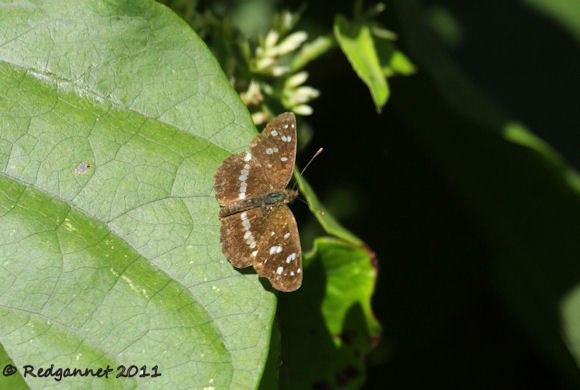