Visiting Costanera Sur Reserva Ecologica this morning, straight from the flight, was to be a quick assessment of the atmosphere there before a rested visit later in the day. Information sheets given to us, contained bold, capitalised warnings recounting recent incidents and advising great caution while in the Argentine capital. Trying to be as discrete as possible, I did not bring my tripod, but refused to be intimidated into not bringing the camera. This proved to be a well-founded obstinacy as the first bird of the morning was a red-crayon, Grey-necked Wood-rail. 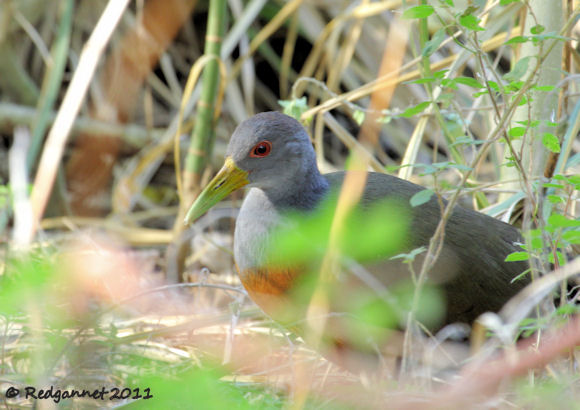 I felt very pleased with myself, being able to catch a photo of such a rare and elusive bird, until later, when I discovered how common and approachable they actually are.
For now, still smug, I found a second lifer in the form a a Spectacled Tyrant and I was 2 for 2. 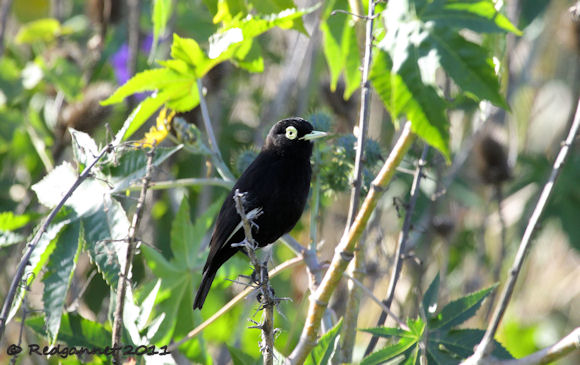 This kind of luck could not continue (I would be hell to live with if it did) and a few more common species were found to the left of the entrance, in an area of long grass and pampas. Eared Doves fed from the ground while Great Kiskadees perched on the edge of a raised, round water tank. Bay-winged Cowbirds looked down from a high snag.
50 meters in from the entrance, is a warden's office and a park map which allowed me to get a mental picture of the reserve. Rufous Horneros, Chalk-browed Mockingbirds and Rufous-bellied Thrushes were easy to find here (actually, they are easy to find everywhere, even from fast travelling buses). Perhaps going to my right may have been the better option with the sun behind me, but instead the birds drew me to the left, facing into a sun which was low in the sky even at 10.00. My eyes were sore after a 13 hour flight from London and dull brown birds would have suited me just now, but an Orange-backed Troupial was the next lifer to sear my retinas. I confess to being ignorant of the bird's status as a lifer at the time. I had seen Troupial, Icterus icterus, before in Brazil, but didn't realise until later that the Argentinian version has been awarded species status as I. croconotus. 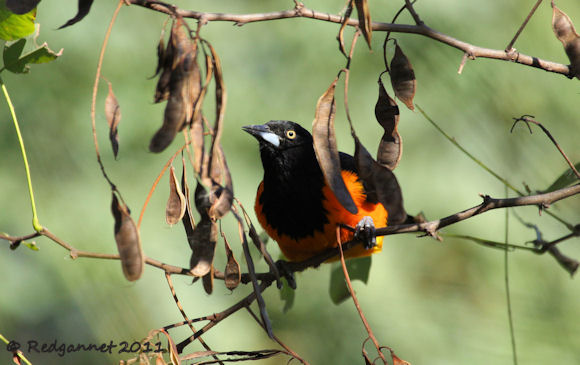 Single ladies (that is one at a time, not unmarried, though of course the conditions are not mutually exclusive), were among the joggers, walkers and cyclists that frequent Costanera Sur. I took this to be a good reflection of the level of threat that I was likely to encounter here. My thoughts are that single ladies quickly find better places to jog if their safety is at risk (unless of course they are really fast joggers). 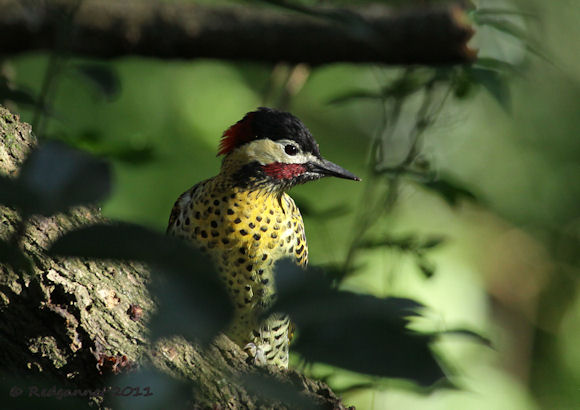 Having made my snap assessment, I could have returned to the hotel for a nap and returned later, rested, but the birding was too good for that kind of nonsense, so I continued, with my fourth red-letter bird coming within 100 meters of the entrance. A Green-barred Woodpecker flew in to the trees on my left. It was accompanied by a second bird which I assumed at first was half of a pair. However the second bird was smaller and proved to be a Chequered Woodpecker. There was no way that I could go to bed with all this hot birding action going on around me. 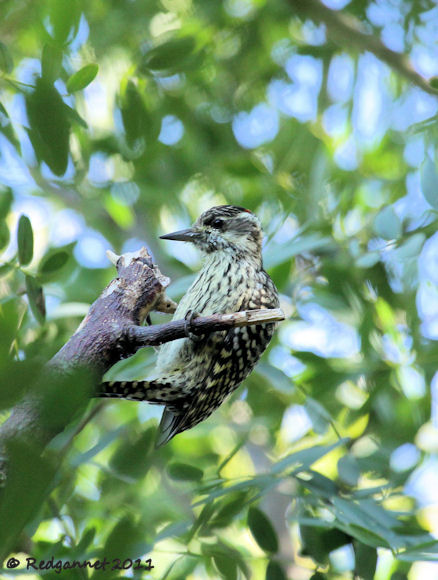 Two little birds that didn't make it onto 10,000 Birds during their wood warbler-fest, a Golden-crowned Warbler and a couple of Tropical Parulas responded well to a bit of "pishing." I was walking along the wide, well maintained road towards the Rio Del Plata, concentrating mostly on the left side where a wide deep ditch was lined either side with trees. A few tiny patches of water in the ditch gave me hope that the reserve had had some rain since GL visited a few weeks ago and found it to be completely dry.
About 400m from the entrance, the road meets the river and turns south-east to skirt along it. There was an opening to access the river bank and I took a quick look into the rushes there to find a small flock of Rusty-collared Seedeaters. The females on their own would have been tricky to identify were it not for the male, he of the rusty collar, popping out for a quick showing. 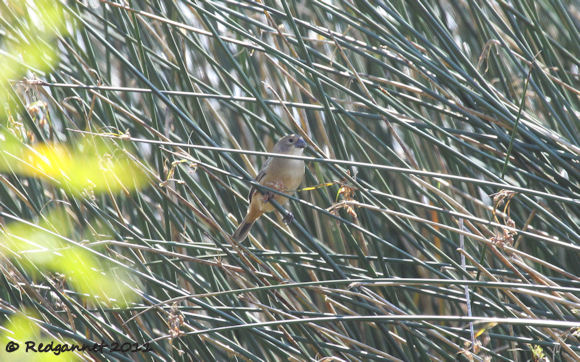 At the open area by the corner, more lifers were found. A Golden-billed Saltator evaded the camera and niether the Grassland Yellow-finches nor the Spix's Spinetail will appear here until I can get a better picture, but they were delicious additions to my lifer list for the day.
I couldn't help but continue along the road as it ran parallel to the river bank. Another Spectacled Tyrant was seen and Picazuro Doves roosted with Pale-vented Pigeons at the top of a dead tree. Both of the woodpeckers were common and seen frequently. I had hoped to see a Great Grebe out on the estuary, but settled for a few Neotropic Cormorants and some Black-backed and Grey-headed Gulls. 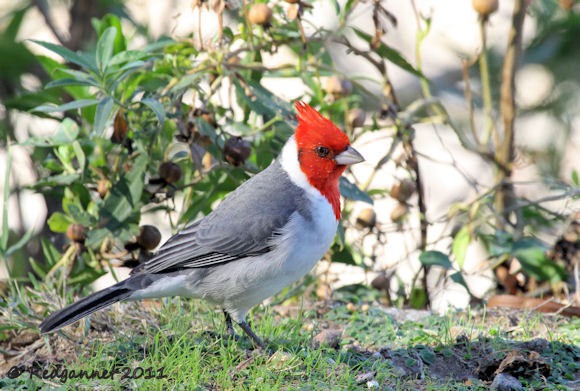 Further along the road, there is a junction where one fork cuts back inland. There is also a picnic spot here which was over-run with school children on a day-trip. This Red-crested Cardinal did not seem to mind and appeared to think that he might pick up a few scraps from the kids. At the junction, I took the track heading back inland, hoping to find a body of water which the map promised was there, but which GL had missed during his "dry" visit in March. It was still dry on this 3rd week of May, in stark contrast to my previous visit here on exactly the same date, 15 years before. On that occasion there had been plenty of water and a good part of my list then was made up of waterbirds such as Southern Screamer, White-winged Coot, Spot-flanked Gallinule and Rosy-billed Pochard. There was no sign of any such thing today. Nor were there any calls from the reeds or any herons or ducks flying over to betray their presence. The areas enclosed by the roads each has the potential to hold water and are known as Lagunas when they are wet, however, up until now, the roads had been thickly lined with bushes and low trees preventing a view. As I passed along the track leading away from the river, the roadside vegetation thinned and allowed me to look out over a large area of reeds and pampas grass. Despite stopping and scanning for a while I could find only one Black and Rufous Warbling-finch and a Rufous-collared Sparrow. 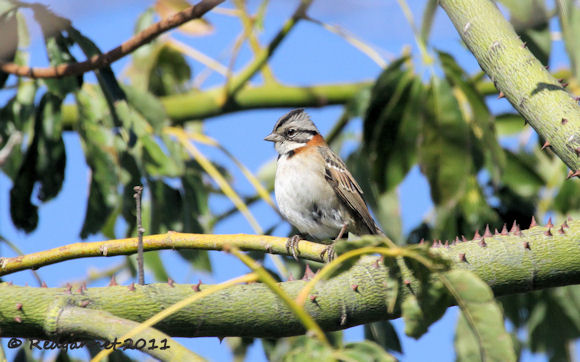 Two American Kestrels took it in turns to perch atop a small metal tower. As I watched them, a larger shape, higher up, passed through my line of vision. After much deliberation, I have decided on a young Red-backed Hawk, but I am prepared to take advice on this one if anybody has a better suggestion. 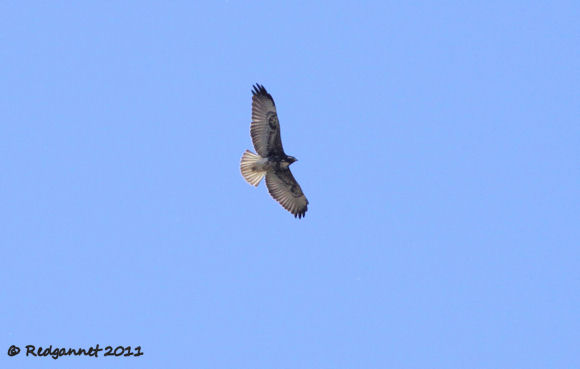 It was lunch-time now and the reserva was becoming very busy with joggers, walkers, cyclists and school children. I had reached the alternative entrance at the other end of the sanctuary. Here there is an interpretation centre and toilets, but no sign of lunch. Hungry and by now, obscenely tired, I followed the road that would eventually bring me around in a big circle to where I had started.
A tiny spring was squirting a weak spray of water into the wide low area that runs along the west side of the reserve. Rufous-bellied Thrushes, Rufous-collared Sparrows and a Southern House Wren lurked close to the edge of the shallow puddle that it had created. Hoping that fresh water might attract some other birds, I sat down to wait for a while. In the bush beside me, I noticed a Guira Cuckoo and some Unicoloured Blackbirds. 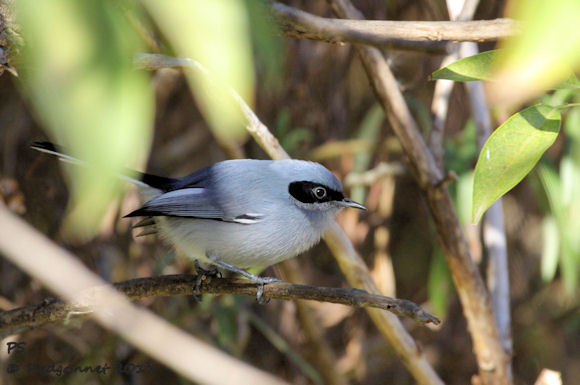 As I approached the completion of my circle, the habitat changed to pampas grass on both sides of the road. In one small bush, three Masked Gnatcathers formed their own monospecial feeding party (PS indicates that the photo was edited to bring the bird out of the shadows). There was some very pleasant evening light in the grassy area close to the entrance and I spent a while there watching a flock of about a dozen Guira Cuckoos build up as they arrived, one at a time, to roost close together. A small puddle in a wheel groove attracted Eared Doves to drink and a Rufous Hornero came by for a bath. 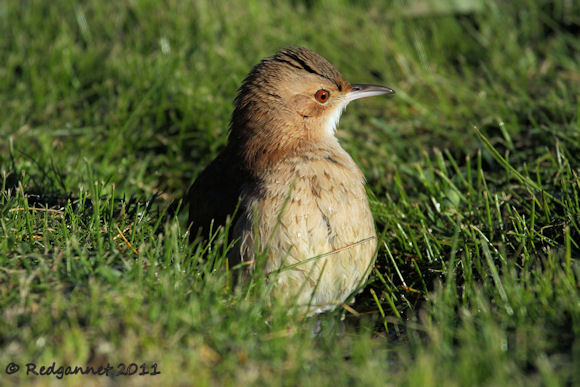 My assessment had taken all day and the light was beginning to fade now, so I headed for the exit. As I approached the gate I saw my first lifer of the day again, the Grey-necked Wood-rail. Far from being elusive, this bird proved to be common and confiding. No less than 6 of them were feeding in the open area immediately adjacent to the gate. I stopped at a pavement cafe for a quick bite and they came out through the fence to compete with the city's pigeons, picking for scraps between the tables! 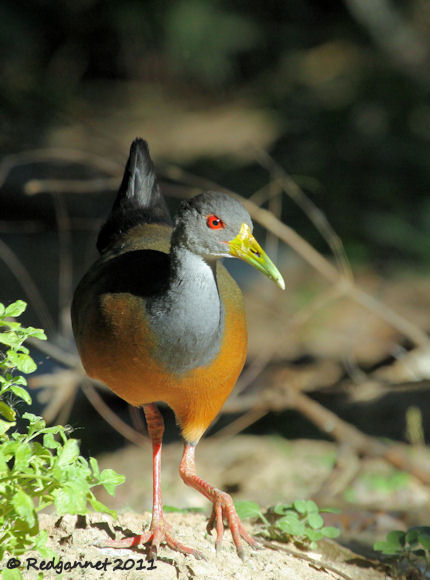 Despite all the warnings, I did not feel threatened during my visit to Costanera Sur with many of the passers-by wishing me a cheery "buen dia" It is about 20 minutes walking from Retiro train station and none of the people that I saw during the day gave me any cause for concern. I later found that the reserve is in an area policed by the navy. There are few routes to escape after a crime, so the level here is low compared to the rest of the city. I guess there is reason behind the warnings though, so please be sensible and discrete. 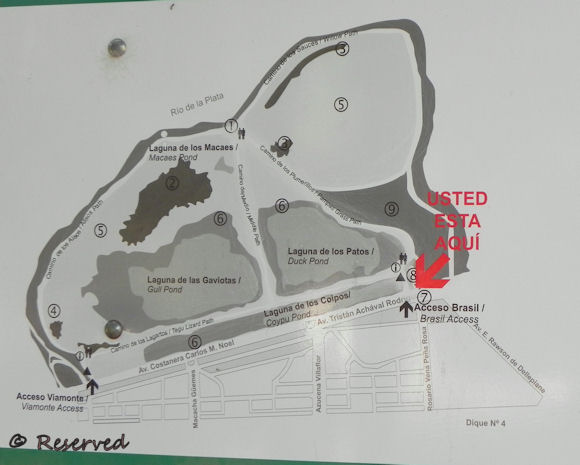 The hotel concierge can provide directions to get there. To find the north-west entrance, go to Google Earth and cut and paste these coordinates into the search box, 34° 35' 57"S 58° 21' 45"W

Visit the dedicated Central and South America Page for more posts from the region.