During this first week of September, adherents across India are celebrating the festival of Ganpati, or Ganesh Chaturthi. It is a moveable feast, but is usually around this time of year. Celebrants parade idols of Lord Ganesh, accompanied by drums, dancing and nevedya offerings, to water and cast him in. Here, he will turn to sand and water before completing the circle and returning to the faithful in his deity form as the benevolent Elephant God. 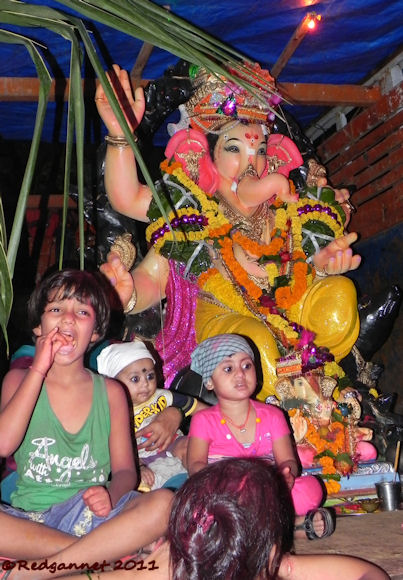 So as not to distract the faithful and to avoid the crowds that would likely throng the shores of Powai Lake, I took myself to the Renaissance Hotel (Google Earth ref; 19 08 04N 72 54 05E (These co-ordinates may not be pinpoint accurate. Please check this link before you rely on them))  where I hoped that the private frontage onto the lake would afford me some peace and tranquillity, but the hotel was preparing scaffolding, launch ramps and stages for the celebrations with lots of people making lots of noise. 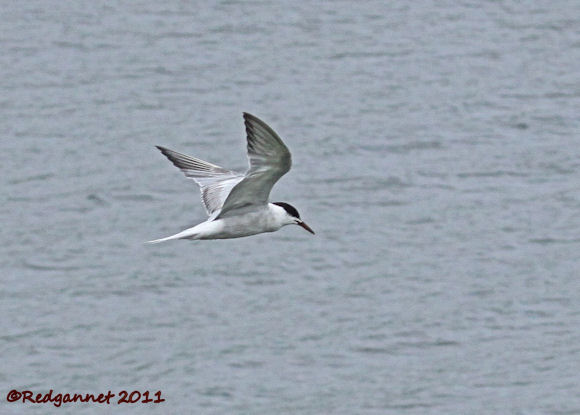 A few birds rose above the industry, notably a Common Tern which was quartering across the lake and made a fly-by close to shore. I was unable to access the shoreline here as an electric fence runs along the bank protecting the hotels’ frontage. 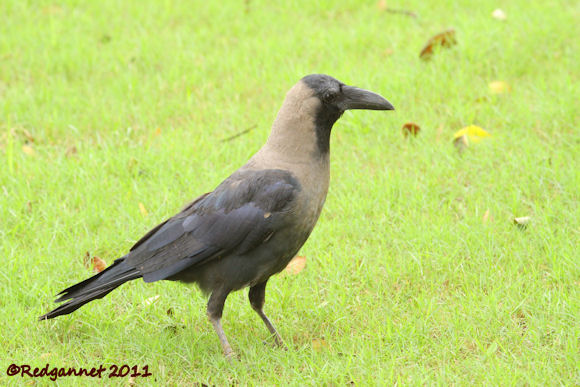 Monsoon rains must have been heavy recently as the ground was very soft and the omnipresent House Crows were easily able to pick into the squishy lawns. A couple of Red-vented Bulbuls showed well, but I quickly decided that it would be better to move on. 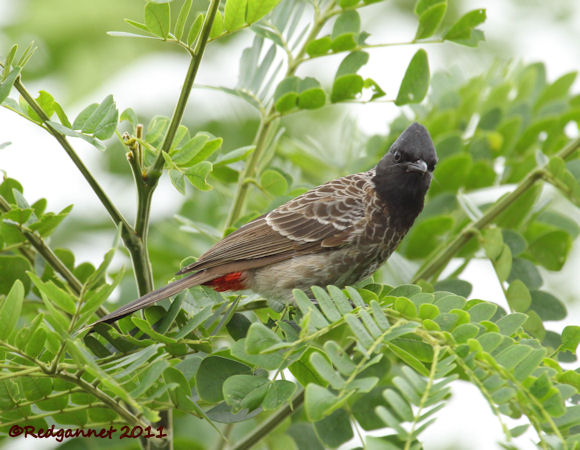 Walking out of the Renaissance Hotel along the ranks of tuk-tuks, taxis and buses, I came across Powai Garden which can be seen on Google Earth, described as a Deer Park, on the western shore of Powai Lake. Not knowing if it was a private garden, I popped my head in for a quick look and found a small forest with a large stream running through it. A White-breasted Kingfisher spooked from the railing of a dilapidated bridge and settled on a branch over the river further up. 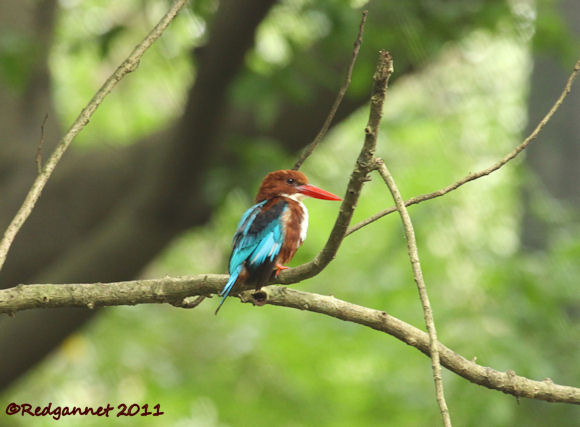 I suspected that the stream must be the outflow from the lake and debris on the railings of the bridge showed that the level must have been substantially higher just very recently. The South-west Monsoon blesses the area around Mumbai from about mid June ‘til its withdrawal at the end of September. We had landed into a very vigorous shower last night and more rain had been threatening all day. 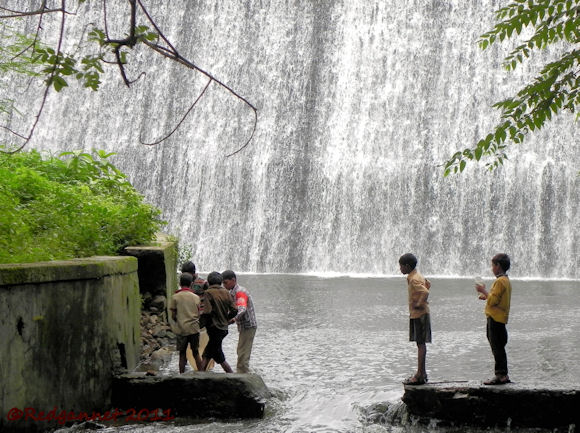 A path running alongside the river led me a couple of hundred meters upstream to a long high curtain of water cascading over the dam wall. Kids were swimming and catching tiny fish which they delighted in showing me. A path leads up to the top of the dam on either side of the wall; I chose the path to the left. A gate prevented me from walking out onto the dam and a fence was in place to keep me away from the water’s edge, but a good view could still be had out across the lake, with houseboats moored along the banks.

Back in the forest there was very little bird activity. An Ashy Prinia and a Common Tailorbird were seen, but little else apart from the crows and the Black Kites. Among the dragonflies were a Variegated Flutterer and a Green Skimmer. This exquisitely patterned butterfly showed a rich blue upperside, but always settled with its wings closed. Any suggestions will be gratefully received as ever. 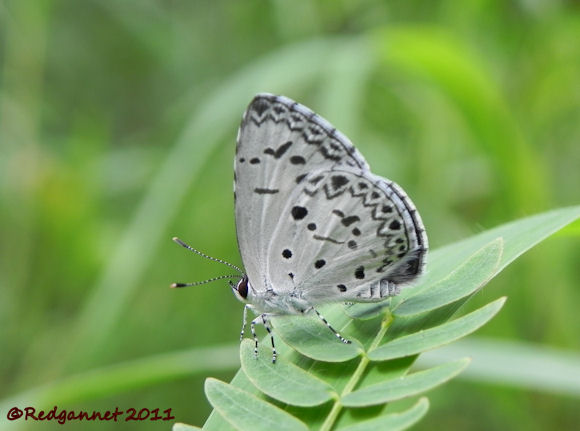 Just after 16.00 the rain began again and the biting insects were getting the better of me after I had sweated off all the repellent. Tip for next time; bring the name and address of the hotel as the keycard does not have it and my return taxi driver did not know it. Hotels have reciprocal agreements that set taxi tariffs for journeys to and from. As an example, the hotel rate was IR 350. The return journey by street cab cost IR 55.
“Ganpati bappa, Morya!
Pudhchya varshii lavkar yaa,
Ganpati gele gaavaala,
Chain pade na aamhala!
Species seen;14
Indian Cormorant 1, Little Egret 1, Black Kite 25, Common Tern 1, Asian Palm Swift 1, Dusky Crag Martin 2, Red-vented Bulbul 2, Ashy Prinia 1, Common Tailorbird 1, House Crow 200, Large-billed Crow 1, Common Myna 30, House Sparrow 20, Nutmeg Mannikin 1. 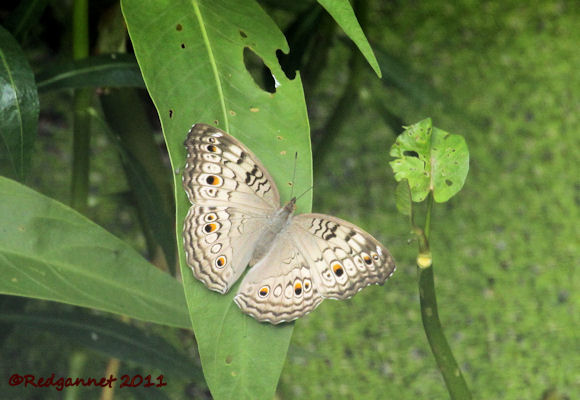 This butterfly seen in the water hyacinth at the edge of the lake also needs a name if anyone knows. If there is no looky-likey to the Grey Pansy, then that is what it is. Confirmation would be well received though.

Visit the dedicated India page for other Indian destinations