I had arranged to meet with Bell Wong this morning. Tai Mo Shan was covered in cloud. If I had been asked for a literal translation of the name of the mountain, I might have suggested, “high land of unhelpful taxi-driver,” as ours had refused to drive us up the slope because he felt that the thick mist was too dangerous on a steep windy road. I shouldn’t have been surprised to find from Bell that its Chinese name actually means, “Big Foggy Mountain.”


It is a vertical rise of 230m from the car park at the bottom of Tai Mo Shan Road to the control barrier at almost 700m above sea-level. It doesn’t sound like too much of a hardship until the heat and humidity are factored in. Bell looked worried. He had already expressed surprise at how tightly my birding silks fitted, even with the elasticated waistband, now he made enquiries about my blood pressure and heart. At least I was sober today. 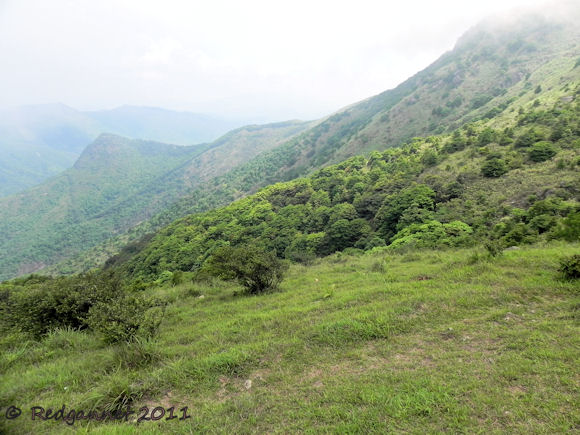 Visibility only improved as we were leaving the mountain
There was very little to see, but we climbed in the hope that the wind and the sun would combine to drive the cloud away and allow us to look for some red crayon birds. I had missed some on my last trip that I wanted to have another look for. The mist veiled our sight and although the bird sounds were subdued, we were able to recognise a few. A Chinese, or Light-vented Bulbul was our constant companion somewhere out to the right and Bell reminded me that the song I had been hearing all of the previous day, a teasing refrain to the tempo of  “you’ve got a hangover,” was from the Yellow-bellied Prinia.

A rising note with an emphatic finish, reminiscent of a stuttering, Australian, Eastern Whipbird, caught my interest. I had heard it last time but dipped on actually seeing the bird which I had suspected at the time to be the Brownish-flanked(Mountain) Bush Warbler. It remained elusive for the moment. A few gaps were appearing in the mist as we heard the call of the Chinese Francolin, “come to the Peak, ha ha!” We slowly stalked further up the road and rounded a bush as a clear patch revealed a male bird crowing from a boulder. I snatched a quick shot before he darted down into the brush of the mountainside. He kept calling however and drew responses from at least two other birds in the vicinity. 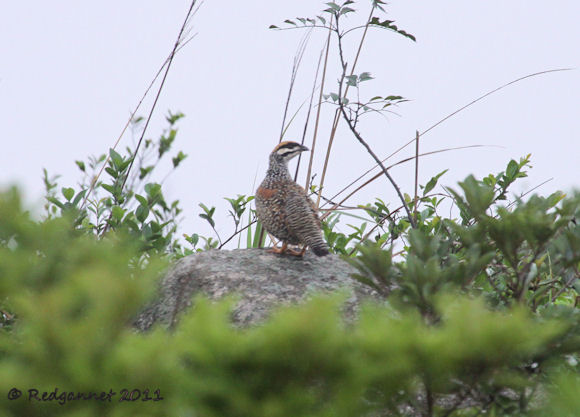 Just before the first of the big switchbacks, a stepped path leads off to the right, south. The end of this path would have afforded us a tremendous view of the city in other circumstances, but we were distracted by another calling francolin. This one was hidden by the mist, but after a short while, the fog cleared enough to reveal another male singing proudly from a rock. We listened to this one for a while and I must say that the interpretation of its call is a very locally convenient one. Anywhere that does not have a tourist attraction called Victoria Peak would probably have stuck with a very farmyard-like “cock-a-doodle-doo.”

We climbed a little further up, but the bird was easily spooked. As the other francolin had returned to his rock as soon as we left, we hoped that if we sat quietly, this one would do the same. We gave it plenty of room, but it did not come back. A thrush (?) sat out on a rock, possibly hoping to get a view over the city, but was probably as frustrated as we were in not being able to identify him. 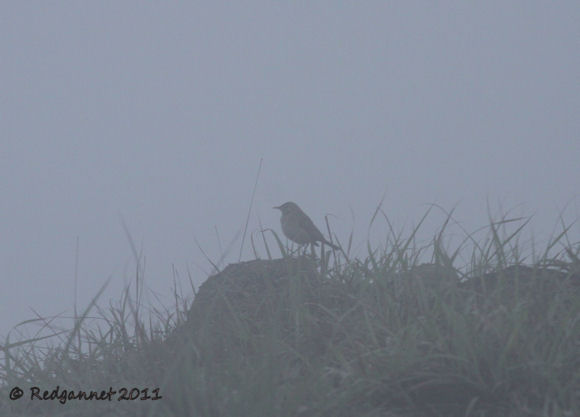 The bush warbler was still calling as we began our descent. One was very near to the road and its call is very loud as if from a large bird. A Black-throated Laughing Thrush appeared from the same bush as the warbler and I thought that I may have misdiagnosed the call. But the warbler was still in the roadside bush and I eventually resorted to playing back his own song from my digital recorder. The warbler flew out, over our heads and into the trees on the other side of the road. He continued singing and gave a couple of passes before I ticked him and left him to his huge song.
There had been no sign of the Upland Pipit which had been the third target bird for the day. Still, two out of three ain’t bad. But wait, what’s this? A long slim bird with a streaming tail flew down from above us and disappeared into the fog. It was a Blue Magpie and softened the blow of dipping on the pipit again.

Tai Mo Shan gave one last surprise in the form of an eagle soaring past a gap in the cloud. I wasn’t able to get any detail before it disappeared into the mist again but if my arm was twisted, I might guess at an Imperial Eagle.

Thank you to Bell for his company, his concern and for remembering to bring the water. There is a toilet block at the car park  by the entrance and a small kiosk that has a limited selection of drinks and snacks. Beyond this, there are no facilities on the mountain. If you want it, bring it.

For previous, posts about Tai Mo Shan and the surrounding area, directions there and for other trip reports for Hong Kong, consult the dedicated Asia Page which also includes Bangkok and Singapore.