This afternoon’s visit to the West African forests was one of the most hotly anticipated trips that I have done in a long time. I was going in search of a White-necked Picathartes and had asked a local guide, Kalu Afasi, to help me. To my mind, Picathartes are birds of legend, seen only by the luckiest, most dedicated bird-spotters. They are endangered and shy, but there is a knack to finding them. They return to their nests each evening and can reliably be seen by waiting quietly for dusk within sight of the nest. It has been shown that whilst they are secretive during the day as they forage deep in the forest, they are bolder around the nest sites and one such place exists near Bonkro Village. Kalu was familiar with it and was confident that we would see the birds. The drive from Accra, had been punctuated by a couple of hours on the coastal plains near Winneba and lunch in Assin Foso before we arrived in the area in the early afternoon. 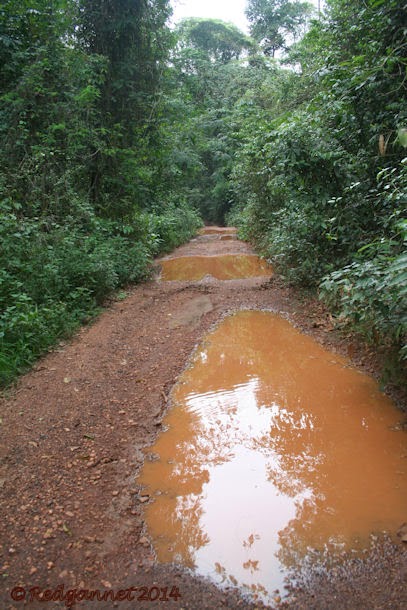 We still had a couple of hours to spare, so Kalu took me for a saunter down a side track to employ the time usefully. The forest here has been logged and logging continues, but it is growing back thickly and there were tall mature trees with a lot of low growth too.
African Emerald Cuckoo could be heard, but it would not respond to Kalu’s playback. Klaas’s Cuckoo and Black Cuckoo however, were curious enough to make a fly past in response to their respective recordings. I am not usually a fan of playback, but without it the forest would probably have given up very few sightings despite us being surrounded by songs and calls. 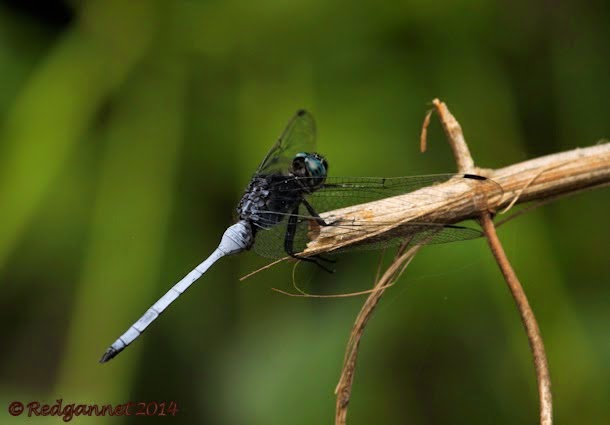 Pictures were very thin on the ground again and in an attempt to bring something home, I took to shooting butterflies and dragonflies that surrounded every puddle on the road. It had been raining recently and the road was very wet, so I had plenty of opportunity to catch some of the more delicate wingéd creatures of the forest. 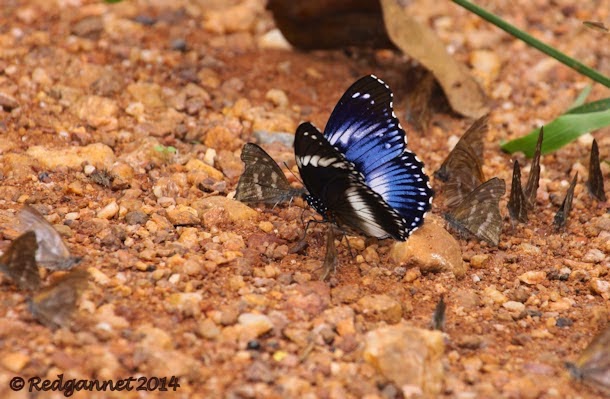 Identifying silhouetted birds high in the trees or ones with little contrasting features in the darkness lower down was difficult and I have to acknowledge Kalu’s familiarity with size, shape and movement and his expertise in matching dull-coloured greenbuls to their calls. I had to take on trust some of his identifications as I was unable to see any distinguishing fieldmarks, but he gained my confidence quickly and easily, so we had very little occasion to argue over an identification. 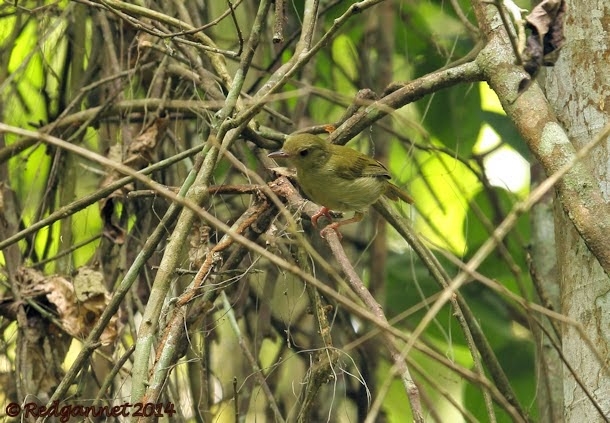 When I did manage to catch a picture of a bird, the camera (which had been set to pick up as much light as possible), brought out the green which was not apparent in the Grey Longbill as we watched it.
Many of the birds gave mere glimpses with Slender-billed Greenbul, Honeyguide Greenbul and Red-tailed Greenbul staying partially hidden. Naked-faced Barbet and Velvet-mantled Drongo were clearer, but high. White-faced Woodhoopoe flashed across the road. An African Pied Hornbill sat out on a dead branch and gave a nice profile for a silhouette shot. 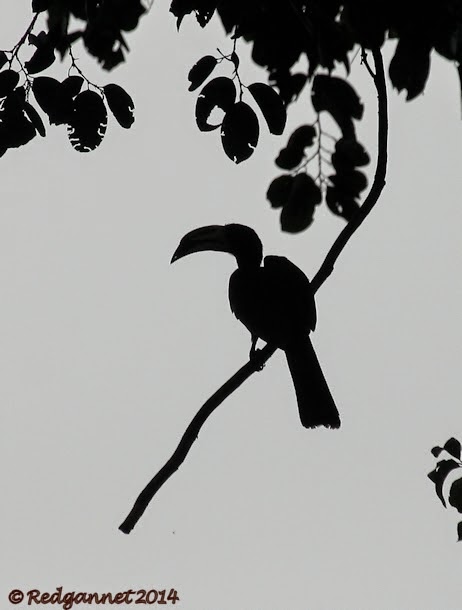 It was nearing Picathartes time and I kept checking with Kalu that we were good for it and he constantly reassured me that we were, so my confidence in him took a knock as we neared the stake-out site to find two birders coming the other way saying that the birds had been and gone.
We had driven on to Bonkro and enlisted the services of a guide from the village. He led us through an agricultural area of cassava, banana and cocoa before cutting into the forest on a walk that took about 25 minutes. We met the two Spanish birders just before we reached the rocky outcrop. They looked pleased with their sighting, but the birds had moved off and they had waited for an hour before giving up on seeing them again and heading out of the forest. I was worried that I might have missed them, but again I was reassured that the birds would show. 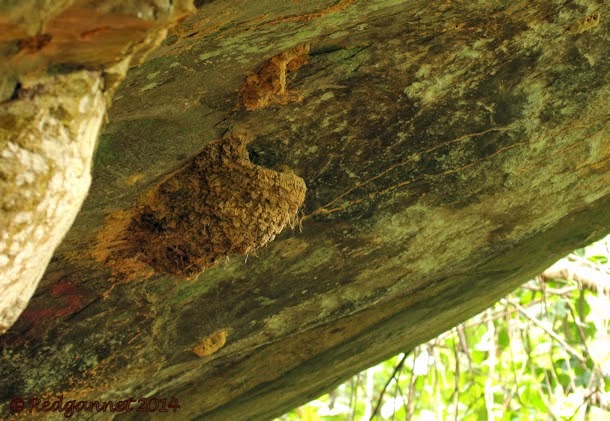 If you can picture the Millenium Falcon, having nose-dived into a jungle, you pretty much have the scene as I saw it. A large slab of rock jutted from the ground at about the same angle that an out of control spaceship would have come to rest and an earthen nest, similar to a swallow’s but bigger, hung from the underside. The approved method of White-necked Picathartes watching is simply to sit quietly and wait for the birds to return to their night roost, so I picked a comfortable looking spot and sat. After 40 minutes or so, it became clear that the spot was not as comfortable as it first appeared, but the birds did show as promised and gave a very close fly by. The guides tapped my toe and pointed into the undergrowth in the opposite direction from which I had been expecting the birds to come. 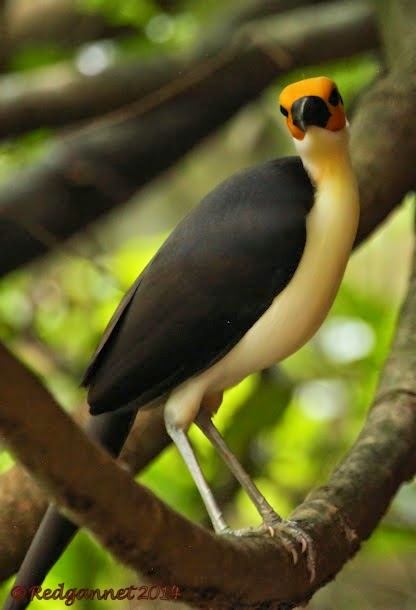 After a while, one came out for a full view while the second lagged behind in the tangles. The bolder one flew past, between us and the rock and stopped just beneath the nest. It looked back for its mate which stayed behind and seemed reluctant to come out into the open. Kalu suggested that it was un-nerved by our presence, so we moved on to allow them to settle down for the night. 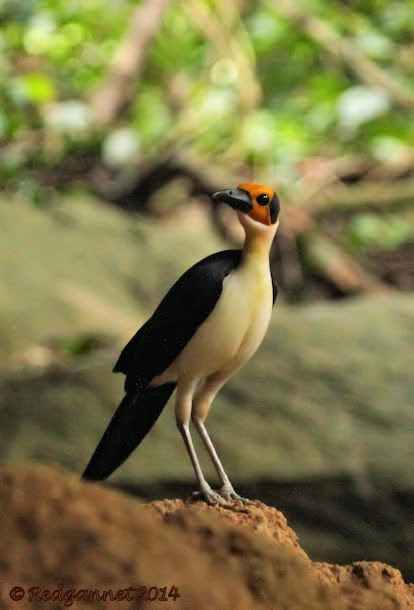 I was delighted with the sighting, but getting a picture had proved a bit tricky. The light was already fading and the area was in heavy shade, so I had had to bump up the ISO rating and open the aperture as much as possible to get enough light for a decent exposure. Truth be told, as I waited for the birds to show up and the evening grew progressively darker, I would have settled for virtually anything, so I am pleased with what I managed to get.

15 life ticks were found in the vicinity of Bonkro Village bringing the day total of first sightings to 22! Preuss’s Swallow was seen en-route and would not otherwise get a mention. 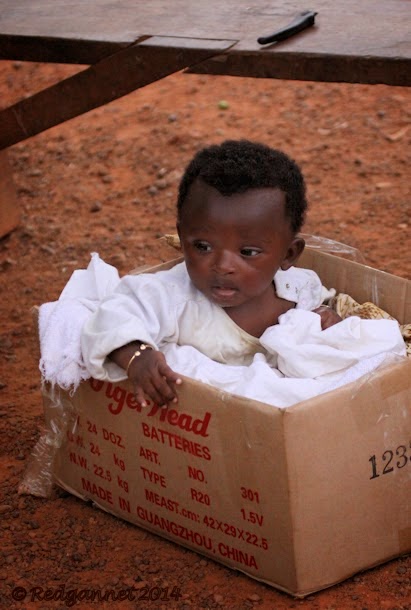 The drive took us through towns and villages, each of them charming in its own unique way. The people were friendly and approachable. I am not able to place Bonkro Village exactly on a map. I didn’t drive and Google Earth resolution in the area is very low. eBird has a Hotspot locator in the general area, but I cannot guarantee its accuracy.

Malaria exists throughout Ghana and you are advised to take precautions. Pharmaceutical precautions are not 100% effective, so the best advice is to avoid getting bitten. Sitting in the forest around dusk is probably a good way to freak out your malarial advisor. Use Deet and cover up.

Visit the dedicated Africa Page for more posts from Accra, including; Aburi BotanicalGardens and Labadi Beach Lagoon and Winneba Plains from earlier in the day